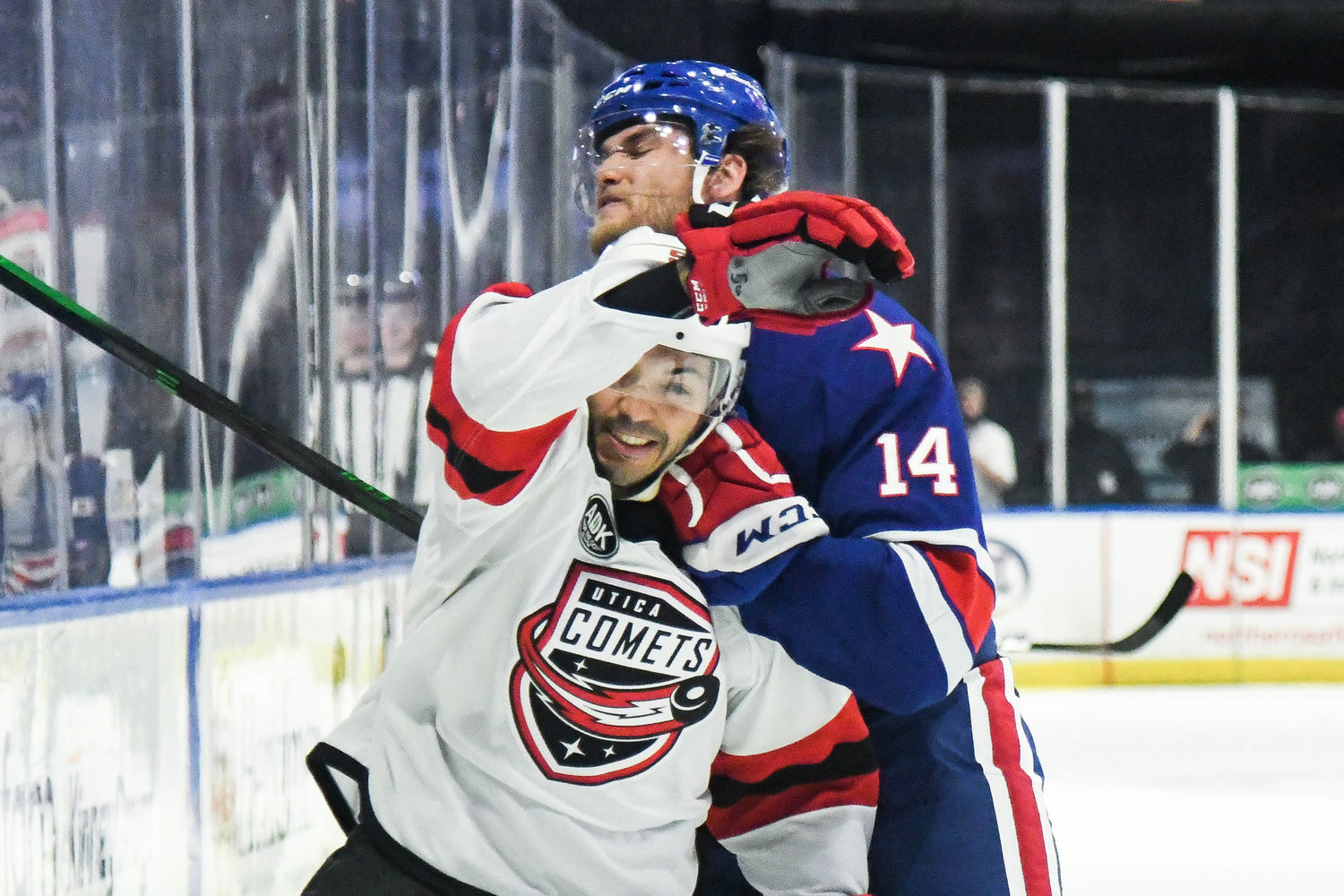 Utica Comets defenseman Robbie Russo is grabbed by Rochester’s Mark Jankowski during Game 2 of the North Division semifinals on Saturday in Utica. Russo, a veteran defenseman, was suspended Tuesday before Game 4 of the series for what the AHL said was an illegal check to the head to Rochester’s Michael Mersch on Sunday. He did not play Tuesday.
(Sentinel photo by Alex Cooper)
Posted Tuesday, May 17, 2022 8:44 pm
Ben Birnell
Sports writer
email / twitter

The Utica Comets were forced to play Game 4 of their North Division semifinals game Tuesday night without arguably their best defenseman.

The Comets got some bad news hours before their game Tuesday in the best-of-five series against the Rochester Americans: Veteran defenseman Robbie Russo was suspended for the game following a checking to the head penalty in Game 3 on Sunday in Rochester.

Game 4 was Tuesday in Rochester. If Utica lost, it would end their season after an impressive start led to elevated postseason expectations.

It is believed to be the first suspension at the professional level for the 29-year-old Russo, who is in his first season with the Comets.

Comets General Manager Dan MacKinnon said he had no comment on the suspension by league other than to say he respected the AHL’s decision.

The incident happened with 14.8 seconds remaining in regulation in Sunday’s game as part of another physical contest in the series between the Thruway rivals. It led to the Amerks’ game-winning goal in overtime to take a 2-1 series lead.

On the play, the puck gets pushed along the boards and Mersch goes to try to make a play, according to a review of the play. Russo skates in and Mersch appears to change his positioning and Russo braces for a collision while keeping his arms down. With Mersch’s head at an awkward angle, Russo’s head also collided with the Rochester player. Mersch’s helmet popped off following the collision.

Russo was given a two-minute penalty for “check to the head.”

Mersch was ruled out by Rochester coach Seth Appert, who told media Monday it was “a dirty, predatory hit” and he hoped “the league does something about it.”

Unlike with some suspensions in the NHL, the AHL doesn’t provide an extended explanation on the reasoning for its suspension.

Comets coach Kevin Dineen told the Daily Sentinel after Sunday’s game the play was “not intentional.”

“It was head-on-head. It was two heads colliding. It is not intentional,” said Dineen, the longtime coach and former player. “It is two guys going into a puck and their heads collided. Our guy had movement and that’s the difference.”

Dineen was not available for comment before Tuesday’s game.

The suspension took a key player out of the lineup for the Comets as Russo is one of two right-handed defenseman on the roster.

Russo, who was named the team’s top defenseman during the season ending awards, had two goals and two assists in three games during the series. It also left the team without a key player on the penalty kill.

Russo is in the first year of a two-year deal with the New Jersey Devils organization. He is making $280,000 at the AHL level this season.