Comets suffer OT loss in physical game against the Sens

UTICA -- Despite their two top scorers this season being called up by the New Jersey Devils, the Utica Comets overcame two one-goal deficits Wednesday at home to force overtime against the Belleville …

Comets suffer OT loss in physical game against the Sens 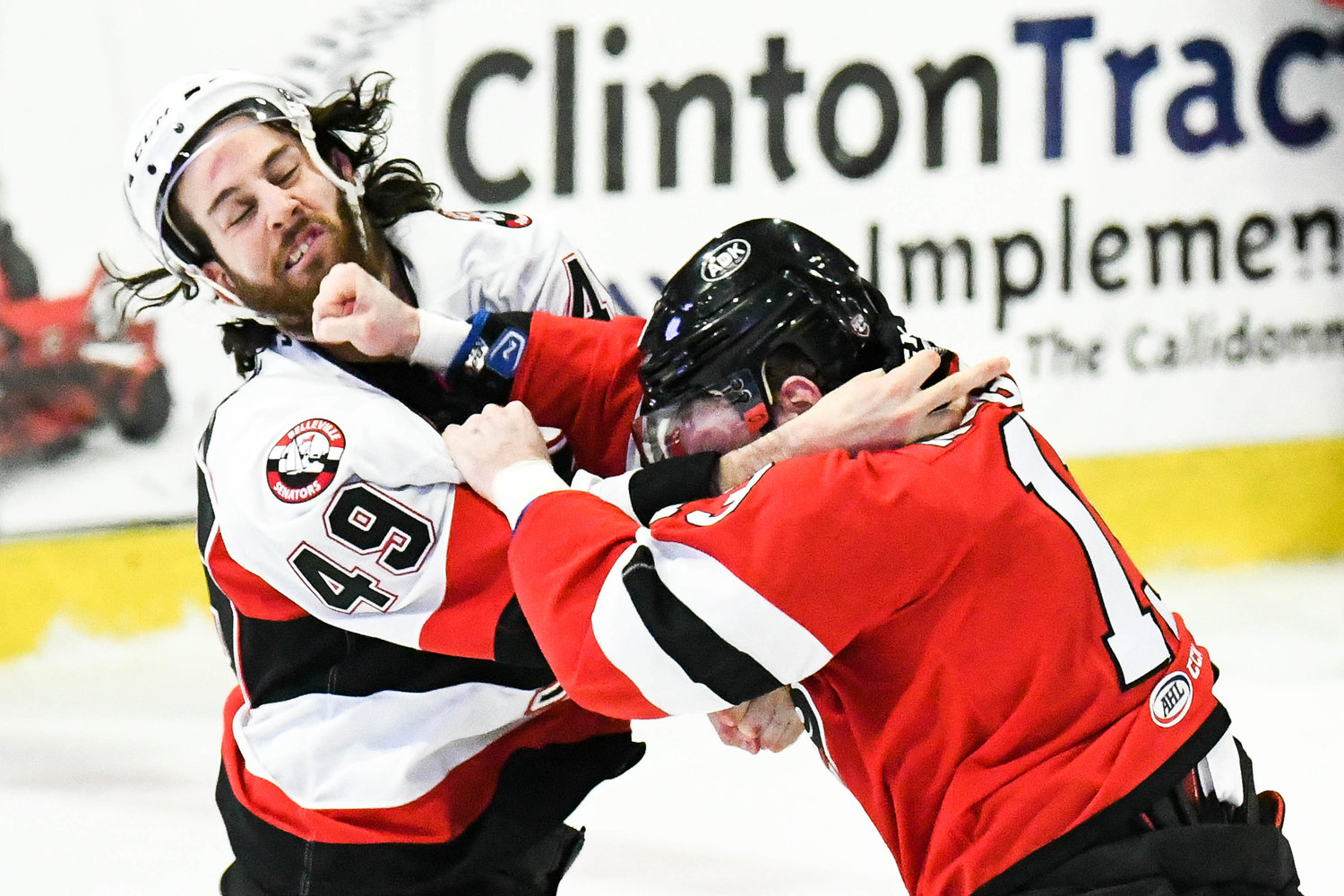 DOING DAMAGE -- Utica Comets forward Patrick McGrath, right, punches Scott Sabourin of the Belleville Senators in the jaw during the game on Wednesday night. The first period fight just over three minutes into the game set the tone for a physical affair between the North Division teams. Utica lost 4-3 in overtime at home but remains at the top of the division standings with only nine games left in the regular season. The two teams will meet again Friday, this time in Canada.
(Sentinel photo by Alex Cooper)
Posted Wednesday, April 6, 2022 11:17 pm
Steve Jones
Sports writer
email / twitter

UTICA -- Despite their two top scorers this season being called up by the New Jersey Devils, the Utica Comets overcame two one-goal deficits Wednesday at home to force overtime against the Belleville Senators. They lost 4-3 on a late goal in the extra frame on Martin Brodeur Night at the Adirondack Bank Center.

"It was a tight game. Obviously they're fighting for the playoffs and playing desperate," said Utica associate coach Sergei Brylin after the game. "We got better as the game went on," with the third period being the team's best of the night, he added. "We had quite a few chances," including multiple breakaways that didn't result in goals.

Brylin said that though it was tough to be without the team's entire first line -- with Fabian Zetterlund and A.J. Greer headed to the NHL and Frederik Gauthier out injured -- "the next guys are going to fill those spots and provide that energy." One player looking to make an impact was Nolan Foote, back in action after missing the last 10 games with an upper-body injury. "He looked pretty good," Brylin said of Foote's two-point night. He had a nice goal and multiple chances, the coach noted, and "he's one of those guys we trust" in all phases of the game.

"I wanted to get back in as quick as I can," said Foote after the game, and he said the team knew the Senators would bring their physical style. "I don't think our intensity was fully there." The team, he said, will have to "come out harder" when the two teams link back up in Belleville Friday night.

The Comets struck first with a power-play goal just over seven minutes into the game. Chase De Leo took a drop pass from Foote between the faceoff circles and he fired off a wrist shot that beat Filip Gustavsson for a 1-0 lead. Foote collected his 17th assist of the season and Reilly Walsh got his 30th. It was De Leo’s 16th tally of the season.

With 3:31 left in the opening period, the Senators knotted it up at 1-1 when they got the puck away from a Comets player in the right faceoff circle in front of Utica goalie Akira Schmid. Egor Sokolov snapped off a shot that beat Schmid and tied the game. An assist went to Zac Leslie.

The Senators continued to outshoot the Comets in the second period, and notched two of the three goals. They grabbed a 2-1 lead 4:26 into the middle frame when Logan Shaw finished a tic-tac-toe play that started behind the Utica net for a power-play goal. Roby Jarventie and Mark Kastelic got the assists.

Foote got his 12th goal of the season to re-tie the game with 8:29 left in the second. His first goal since March 11 came when Michael Vukojevic spotted him at the goal mouth and sent a long pass to him that he redirected into the net. Vukojevic earned his 10th assist of the season and Tyce Thompson got his sixth. But Belleville took the lead back at 3-2 when, with 1:55 left in the second, Colby Williams got open in the left faceoff circle and sent a shot to the far side of goal, past the glove of Schmid. Kastelic tallied his second assist of the period and Dillon Heatherington also was credited with an assist.

The lone goal of the third was Alexander Holtz's 23rd of the season -- second best on the team. With the referee's arm in the air for a delayed penalty on the Senators, De Leo sent a pass out from behind the visitors' net to Holtz on the doorstep. He ripped a shot past Gustavsson to tie the game again, this time at 3-3, with 7:59 left in regulation. De Leo earned his team-leading 33rd assist and Joe Gambardella got his 19th assist for his part.

As time expired in regulation, the Senators committed another penalty to put the Comets in a four-on-three advantage at the start of overtime. But the Senators killed off the man advantage and then struck for the game-winner 87 seconds later. Shaw got his second goal of the game 3:27 into overtime when he finished off a pass low across the offensive zone. Cole Reinhart and Leslie earned assists.

"Chances were there, especially in overtime we have to use our power play to make the difference in the game," Brylin said. The team scored one power-play goal in five opportunities in the game.

Schmid made 30 saves in the loss while Gustavsson had 27 stops to earn the win in net.

The Comets fell to 39-16-7-1 on the season but retain the top spot in the North Division with nine games left on their regulation season schedule.

The team will play at Belleville Friday then stay in Canada to take on the Laval Rocket Saturday.

The American Hockey League announced Wednesday that Rochester Americans forward Ben Holmstrom has been suspended for eight games for using homophobic language in a game against the Comets on March 30 in Rochester.

The incident happened at the end of the first period of the game when Holmstrom and Chase De Leo were seen pushing and shoving after time expired. It is unclear what was said, but De Leo was spotted talking to the officials after the incident.

Holmstrom was given a game misconduct during the contest. The AHL said Holmstrom will be participating in diversity and inclusion education as part of his suspension.

Comets General Manager Dan MacKinnon said the investigation was "league-initiated" after the incident was reported by the game officials.

"We were supportive of the investigation," MacKinnon said. "The league wants clear feedback and reporting on anything of this nature. That's what is happening now. The consequences in terms of the penalties I think they're able to act more assertively and with more precedent-setting because the officials are on notice to report back to the league."

Holmstrom has served two games of the suspension. Rochester has 11 regular-season games remaining. Utica and Rochester are set to play Friday, April 22 in Utica and April 29 in Rochester.

“We were made aware of an inappropriate comment made by one of our players in a recent game. Once aware, we took immediate action through numerous conversations with the player, team, and league,” Americans general manager Jason Karmanos said in a statement. “To be clear, we have no tolerance for any form of hate and regret any harm his comment inflicted. We strive to maintain an inclusive environment in which our differences are celebrated. We have sought counseling awareness resources for the player.”

Holmstrom, who turns 35-years-old Saturday, has appeared in seven NHL games with Philadelphia between 2010 and 2012 and has played over 600 games in the AHL. 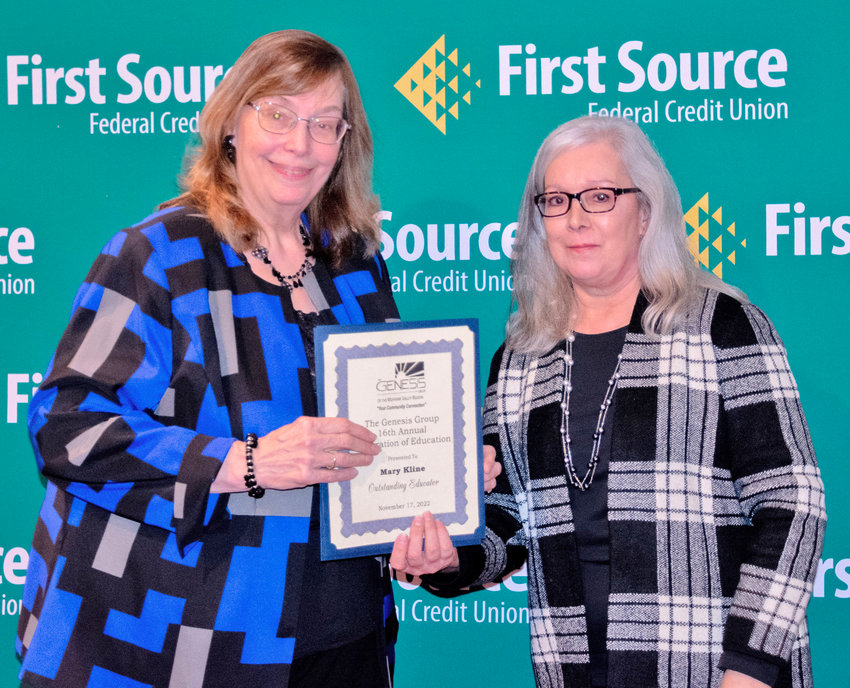