UTICA — Beer and hockey fans usually go together pretty well. The Utica Comets have taken inspiration from that mindset as well as the city’s longtime beer history for their newest special … 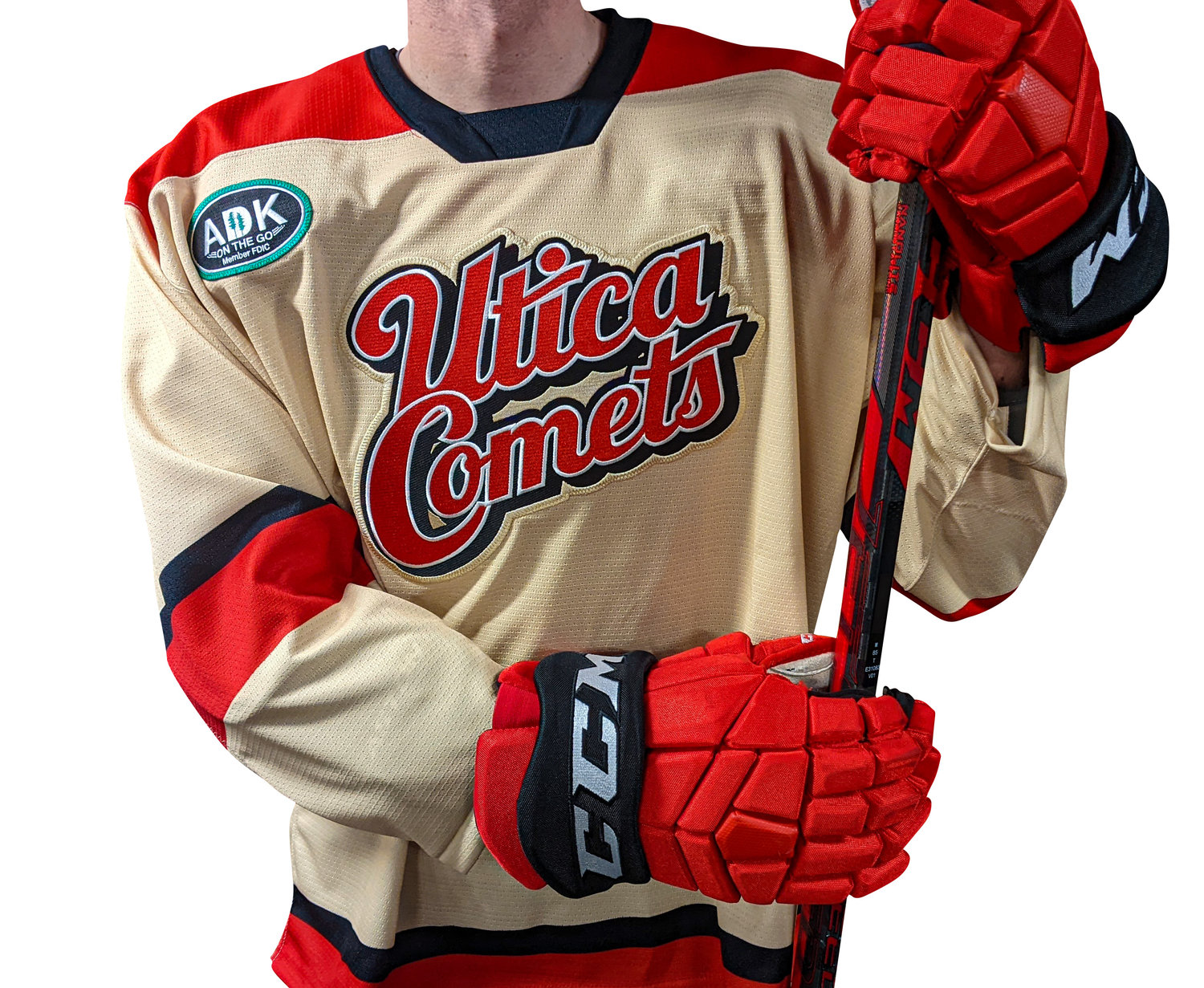 The Utica Comets have taken inspiration from that mindset as well as the city’s longtime beer history for their newest special jersey.

And, yes, popular characters Schultz & Dooley have a spot on it as well.

As part of the Comets’ scheduled “Roaring 20s Night” game next Saturday against North Division rival Belleville, the team has revealed the jersey that includes elements of Utica Club. The lager, which was introduced in 1933 and was the first beer sold after Prohibition by the West End Brewing Company — now known as F.X. Matt Brewing Company located on Varick Street — has gained a following throughout the Northeast.

The jersey has a cream-colored base, which the team says is “reminiscent of the foam” on a Utica Club beer. The beer can has had a similar color in recent years as well.

Perhaps the most notable part of the jersey is the crest, which features “Utica Comets” in a script in the style of the Utica Club logo in red, black and white lettering.

It is the second time a Comets jersey is set to feature only words on the front in the team’s nine seasons. The team wore a jersey honoring the Clinton Comets in 2016 with the word “Comets” on the front.

Another element of the Roaring 20s jersey is Schultz & Dooley featured on patches on both shoulders, which are red. The “spokesmugs” were introduced in 1958 as part of an award-winning commercial campaign for Utica Club.

The team said more information will be released next week on how to obtain a game-used or replica jersey. In recent years, the team has auctioned its game-used jerseys following the contest.

The jersey is designed by Eric Kowiatek, the team’s vice president of creative services and a Utica native.

“I think it is a jersey that everyone is going to love,” Comets President Rob Esche said.

Based on initial reaction from people on social media, he appears to be correct. Many people who commented on social media said they liked the jersey and wanted to buy one.

WHAT TO KNOW: This is the first meeting between the North Division rivals since Feb. 4 when the Utica won 3-2 in overtime. At the end of the game, the teams clashed near center-ice as tensions erupted. Sixty-five minutes of penalties were handed out from the clash. … It is the sixth and final meeting between the teams in the regular-season. Utica is 3-2-0-0 against Laval this season. Utica has won two of the last three meetings between the teams. … Utica has scored three or more goals in each meeting against Laval. Utica is averaging 3.51 goals, which is third-most in the AHL. … Joe Gambardella (three goals, two assists), Alexander Holtz (three goals, two assists) and Frederik Gauthier (five assists) each have five points in games against Laval this season. … Nico Daws, who remains on recall with New Jersey, has started four games against Laval. Akira Schmid is 1-0 against Laval. … Forward Nate Schnarr, who was traded by New Jersey on March 21, has a goal in eight games with Laval.