The Utica Comets and the Rochester Americans played their second game in two days on Saturday night. 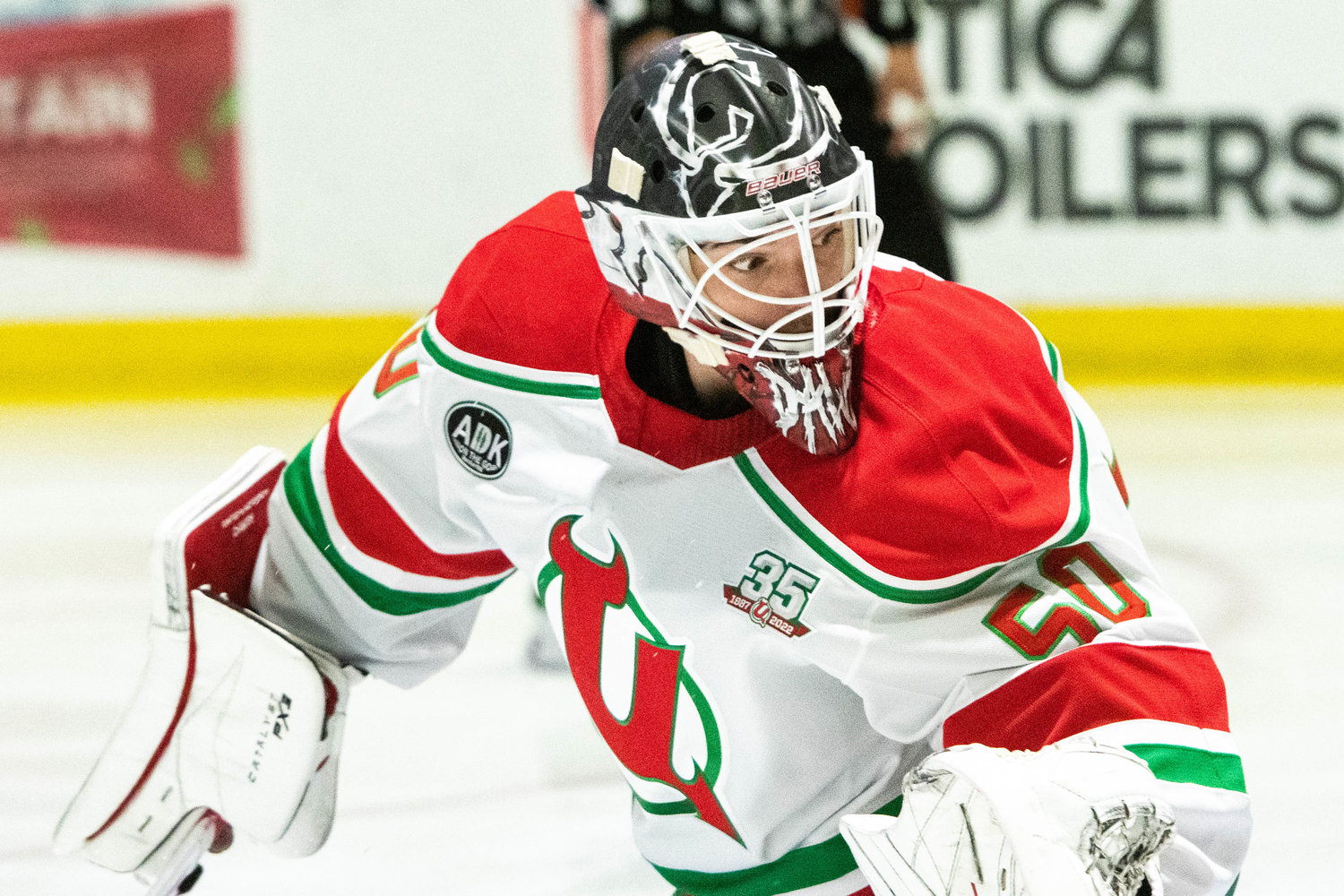 Utica Comets goaltender Nico Daws turns to find the puck after a missed shot at home Saturday night against the Rochester Americans at the Adirondack Bank Center. Daws had 21 saves but the Comets lost 3-2. It was his second start in two games, the night after he helped Utica to a 3-2 win in Rochester.
(Sentinel photo by Alex Cooper) 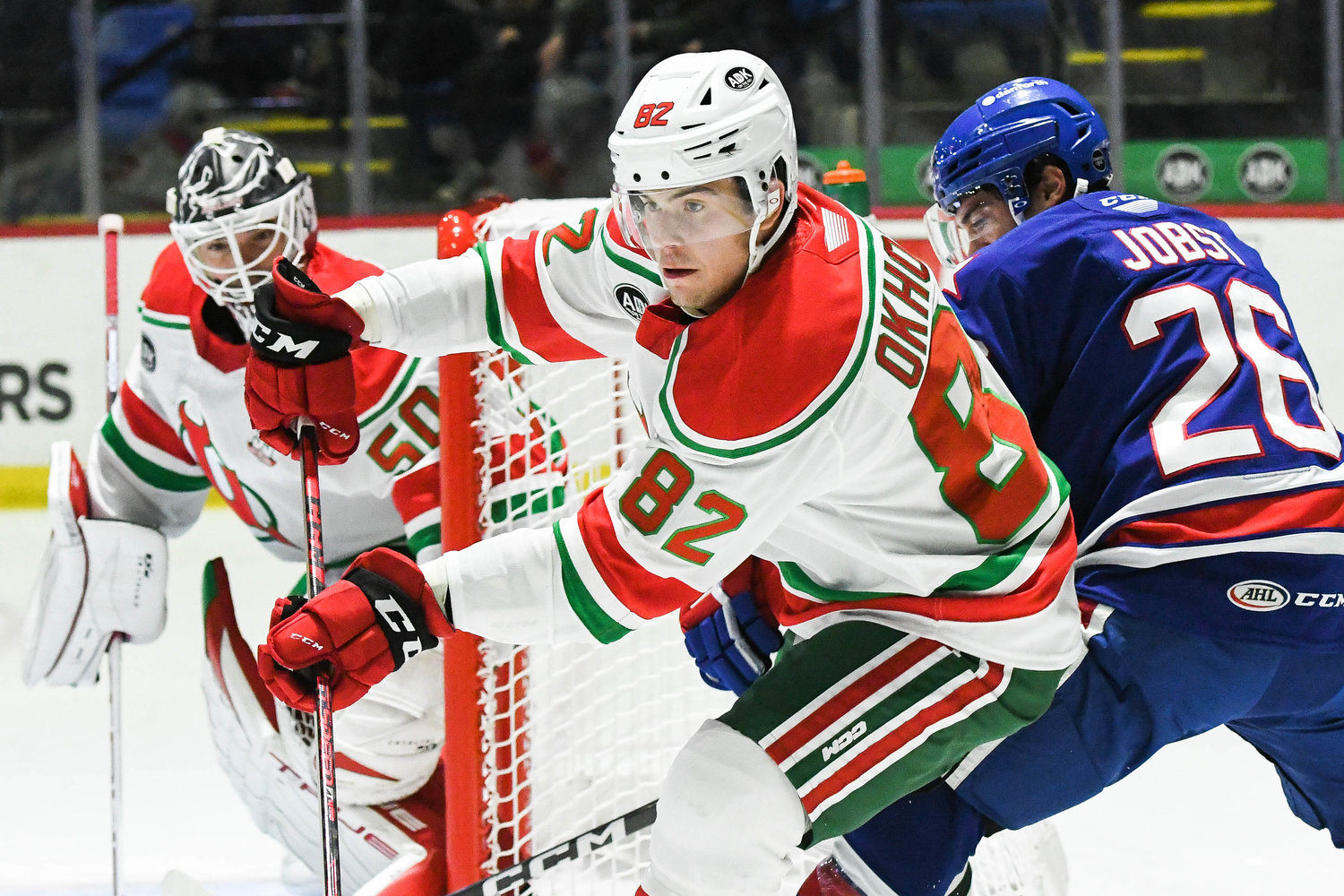 Utica Comets defenseman Nikita Okhotiuk passes the puck from his team's defensive zone against the Rochester Americans on Saturday at the Adirondack Bank Center. At right is Amerks' center Mason Jobst. Utica goaltender Nico Daws is at left. The Comets lost 3-2 to their North Division rivals.
(Sentinel photo by Alex Cooper) 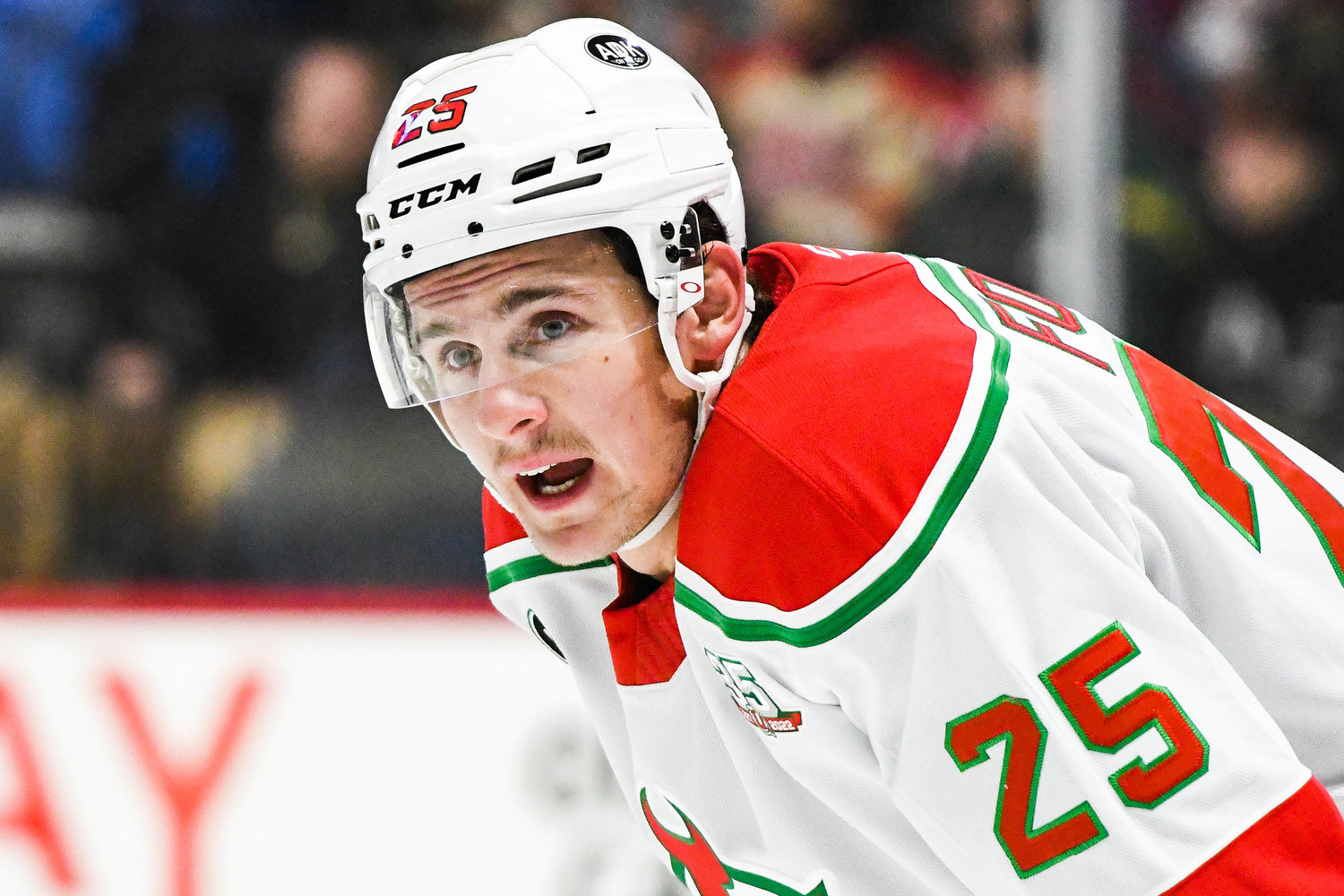 Utica Comets forward Nolan Foote talks to a teammate before a faceoff on Saturday at home in the Adirondack Bank Center against the Rochester Americans. The visitors won 3-2.
(Sentinel photo by Alex Cooper) 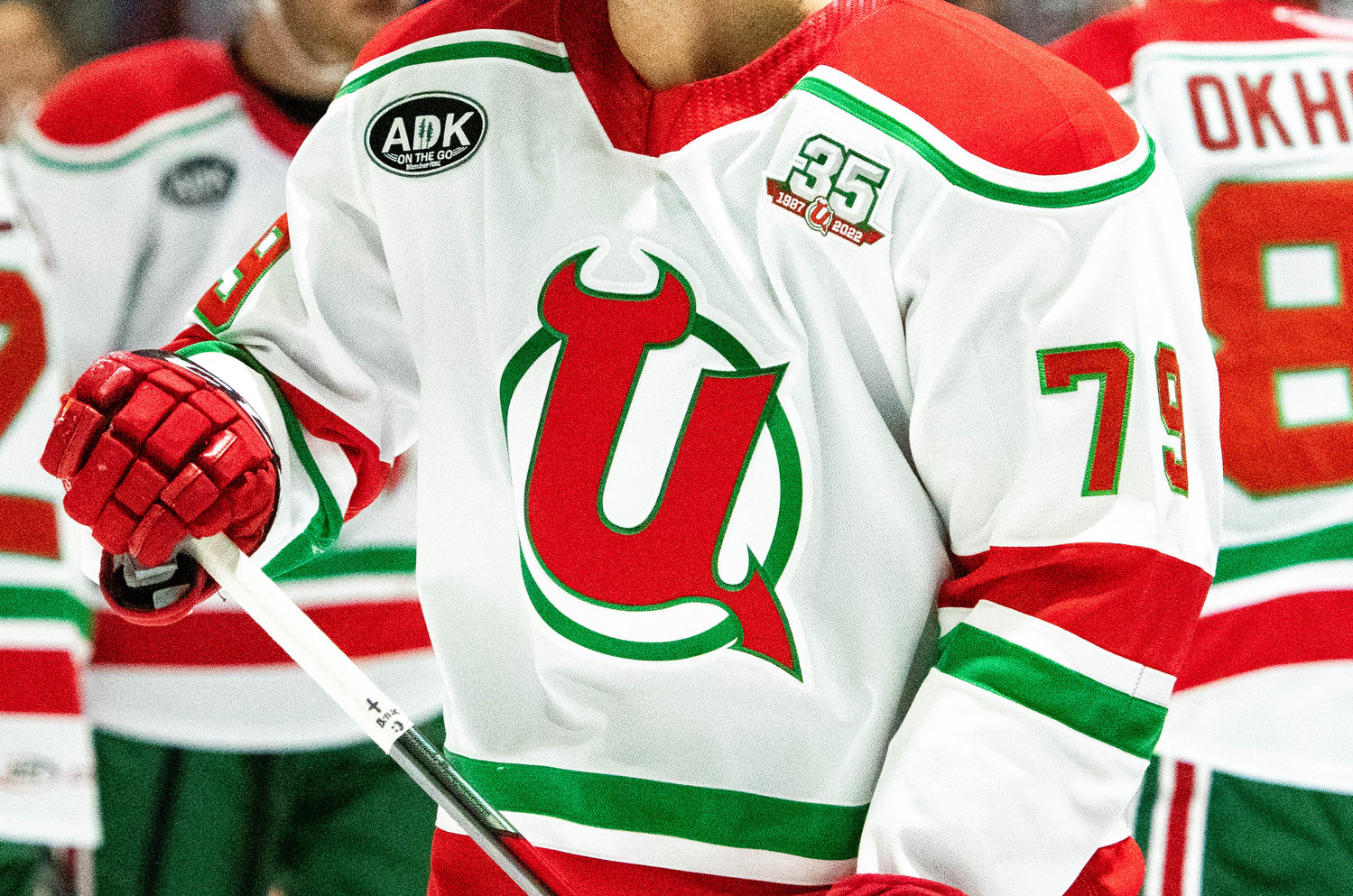 The Utica Comets sported a throwback Utica Devils jersey Saturday night at home to celebrate the 35th anniversary of when that team made its debut in the city as an AHL team. The Comets lost, however, 3-2.
(Sentinel photo by Alex Cooper) 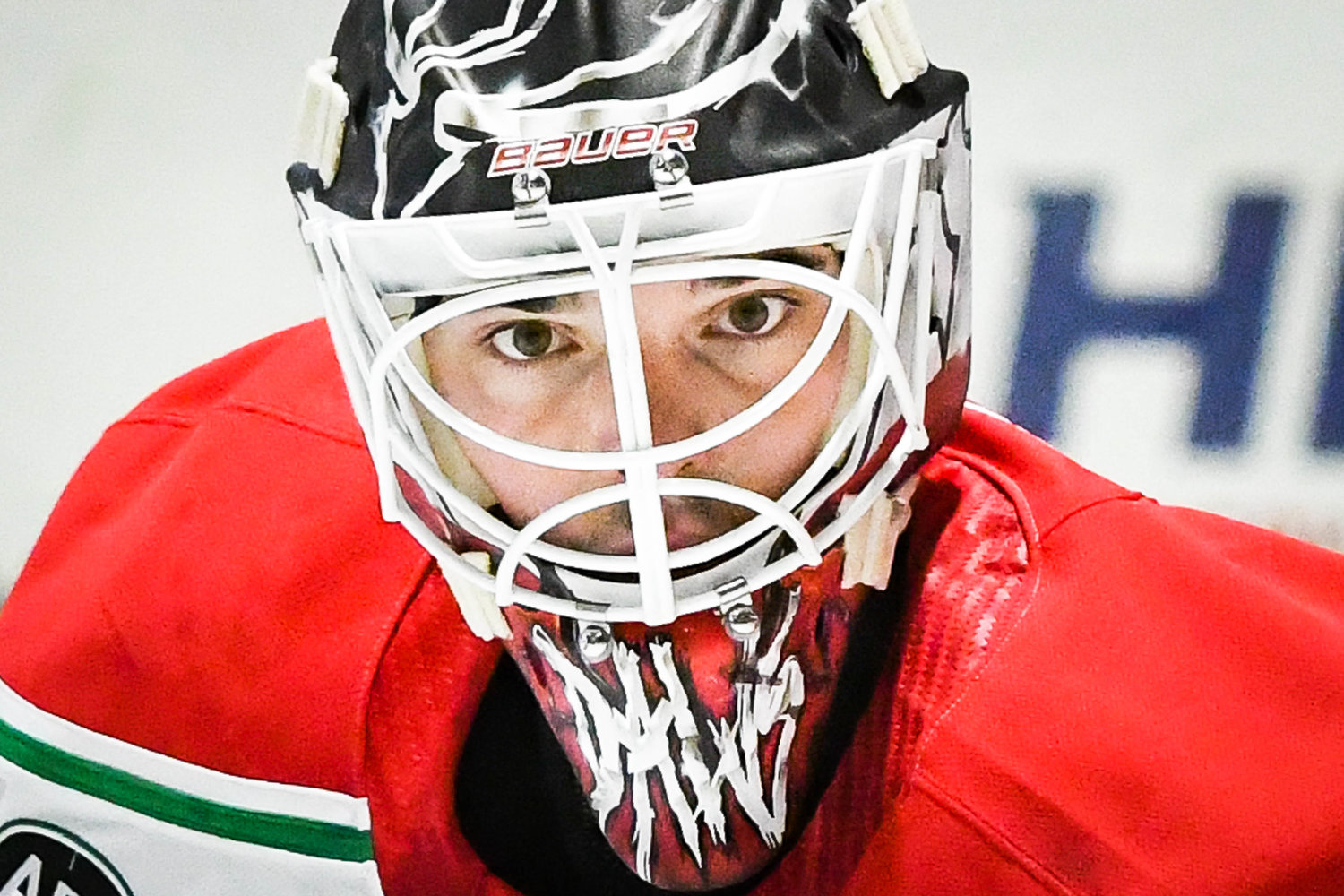 Comets goaltender Nico Daws tracks down a shot during the game against the Rochester Americans on Saturday at the Adirondack Bank Center. The Comets lost to their North Division rivals 3-2.
(Sentinel photo by Alex Cooper)
Previous Next
Posted Sunday, November 20, 2022 12:45 am
Steve Jones
Sports writer
email / twitter

UTICA — The Utica Comets and the Rochester Americans played their second game in two days on Saturday night. While the Comets won 3-2 in Rochester on Friday, on Saturday the road team also won 3-2, but this time it was the Amerks as the visitors.

The teams traded goals throughout the first two periods, but Rochester struck first and never trailed.

Aleksandr Kisakov scored on a Rochester power play 5:41 into the game to give the visitors a 1-0 lead. His shot from the left point found its way through traffic in front, past goalie Nico Daws and into the top corner of the goal on the far side.

Comets' leading scorer Brian Pinho tied the game at 1-1 with a power-play goal of his own with 53 seconds left in the opening period. He scored his eighth goal of the season when he fired home a rebound near the top of the crease. Nolan Foote drove to the net and got the initial shot, with Pinho there to clean up the play. Foote collected his fourth assist of the season and Andreas Johnsson got his team-leading ninth helper. The assist pushed Johnsson's point streak to seven straight games.

Brendan Warren put Rochester back up by one with a goal with 11:48 left in the second period. He scored while cutting between the circles and as he lost his footing.

Again the Comets tied the game, this time at 2-2. Brian Halonen sent a pass to Nick Hutchison to spring him on a breakaway. Hutchison snapped of a shot that beat Michael Houser for his second goal of the season with 5:33 left in the frame. Assists went to Halonen (his fourth of the season) and Samuel Laberge (his second). Halonen extended his point streak to four games.

It didn't stay tied for long though, as Isak Rosen grabbed a rebound when Daws couldn't hold on to the initial shot. He went around Daws and deposited the puck at the far post to put the Amerks up by one again, one minute after the Comets' goal.

Despite Utica pulling Daws late in the third period for an extra attacker the Comets could not find another game-tying goal and the scoreless period came to an end with Utica still down a goal.

"When you're not prepared that when a team pushes a bit, when you don't have the recognition what's happening, it just keeps coming at you," said Utica head coach Kevin Dineen after the game. "When you have the puck on your stick you gotta have the abilities to make plays." The team had trouble throughout the night both generating sustained offensive zone pressure and denying the Amerks their own offensive zone time.

On offensive, Dineen said, it was a challenge to overcome "our inability to get the puck, hold onto it and get some sustained pressure on net." Defensively, to get the puck out of the zone, "you really need support and pass options. When you have that it makes the game easier." Part of that is players coming back into the zone against an opponent that plays with speed, to help relieve the pressure on the defenders, he noted.

"The game gets into a situation that you have the puck you want to hang onto it, and I don't think we hung onto it as much as we wanted to tonight," Dineen said.

Pinho credited his success so far to "giving my best effort and trying to be good on the offensive and defensive side of the puck." He said he is "trying to use my speed as much as I can. We have some talented guys in the locker room, and It's easy to play with guys like that. Now we just need to connect the dots." He added, "Winning is important, and that's what we need to focus on."

In net, Daws made 21 saves in his second start in two days. Houser stopped 26 shots to earn the win.

The Comets host the Belleville Senators at 7 p.m. on Wednesday.

Comets get first of the home-and-home series

On Friday, it was a close game throughout, with Utica managing to find a go-ahead goal with just a few minutes left in Rochester.

Tyce Thompson scored for Utica with less than three minutes left in regulation to propel the Comets to a 3-2 victory.

In the first period, Andreas Johnsson fed the puck to the streaking Jack Dugan who sent a shot past Rochester netminder Malcolm Subban for the first goal of the game at 9:24. Johnsson and Reilly Walsh earned assists on the score.

It took the Americans 24 seconds to tie the game. A centering pass from behind the net of Daws hit a Comets player in front and bounced in at 9:47. The goal was awarded the Michael Mersh.

The Amerks took their first lead of the game on a shot by Ryan Malone at 1:07 of the second period that beat Daws over his blocker. The Comets re-tied the game when Nikita Okhotiuk took a harmless looking wrist shot from just inside the left circle. The puck found just enough room between Subban and the near post for Okhotiuk’s first goal of the season. It was assisted by Brian Halonen and Robbie Russo at 6:04.

Thompson's late go-ahead goal was on a rebound when he blasted home the puck after a point shot by Walsh hit the post. Thompson lifted the puck into the net behind Subban who was unable to see the puck resting at his side.