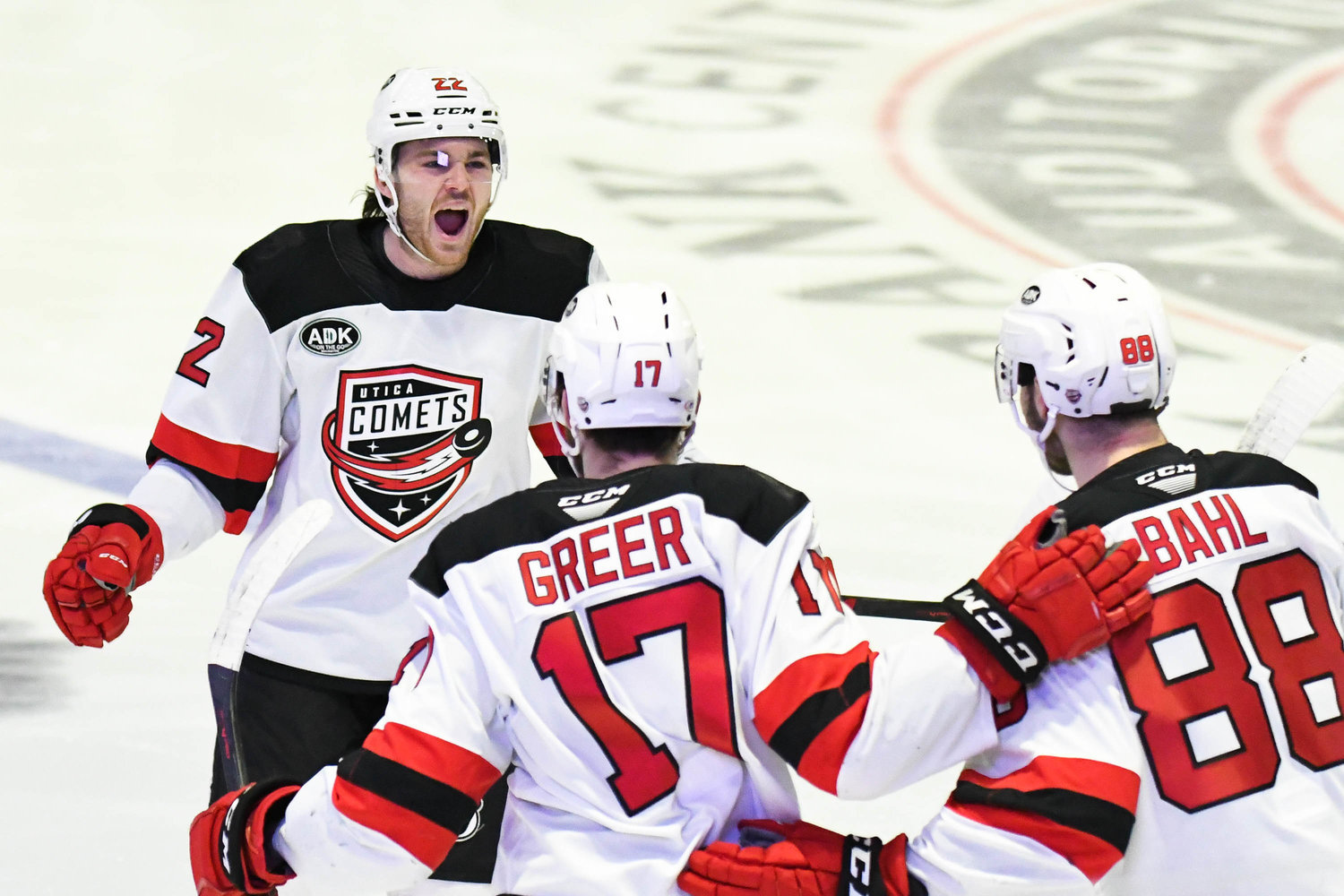 The Utica Comets were helped by contributions from Reilly Walsh, left, A.J. Greer, and Kevin Bahl this season. The team had a 23-8-4-1 record at home this season. That's the best mark among the American Hockey League's Eastern Conference teams this season.
Sentinel photo by Alex Cooper 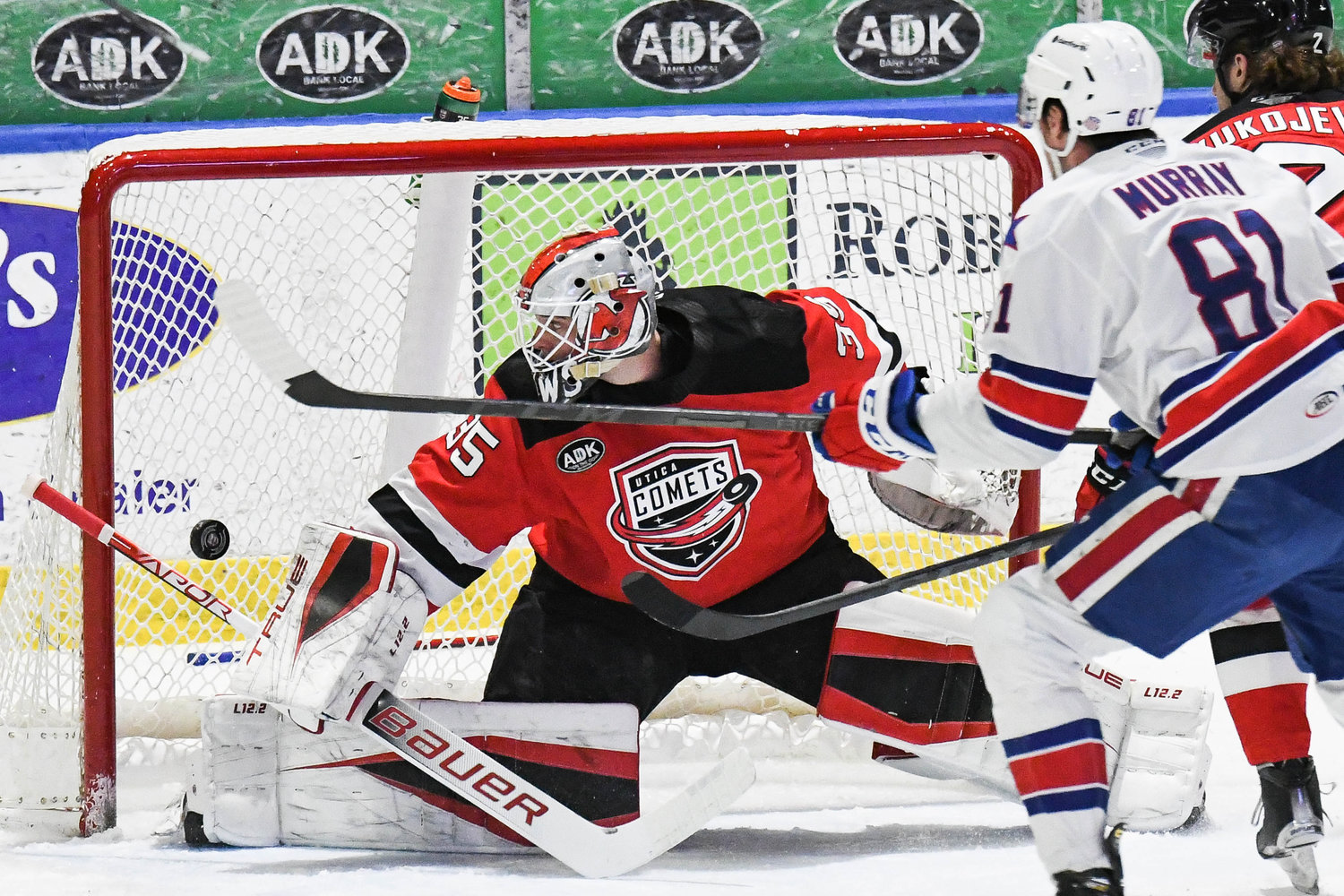 Utica Comets goalie Nico Daws led the team with a 4-2-0 record and a 2.81 goals-against average in seven appearances against Rochester this season. Utica meets Rochester in a best-of-five series in the North Division semifinals. Game 1 is 7 p.m. Tuesday in Utica.
(Sentinel photo by Alex Cooper) 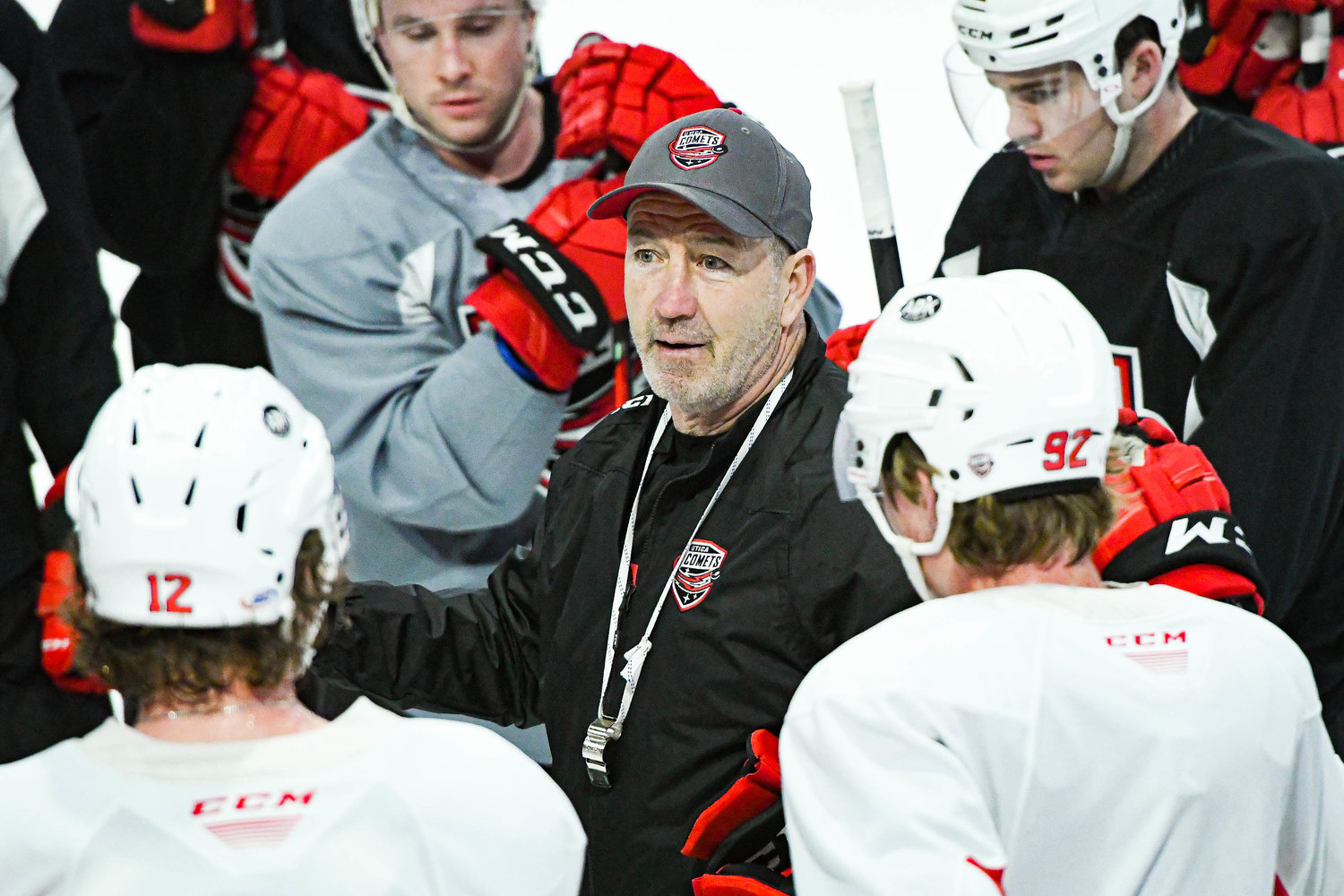 Utica Comets coach Kevin Dineen and the team begin their best-of-five playoff series against Tuesday against the the Rochester Americans. Both teams had a head-to-head record of 6-5-1-0 this season.
(Sentinel photo by Alex Cooper)
Previous Next
Posted Tuesday, May 10, 2022 7:40 am
Ben Birnell
Sports writer
email / twitter

UTICA — The quest begins for the Utica Comets.

After compiling the best record in the American Hockey League’s North Division and Eastern Conference, the Comets – in the first season as the New Jersey Devils’ affiliate – begin an opportunity tonight they hope leads to playing for the Calder Cup trophy next month.

With this year’s success, there’s elevated expectations of creating memories similar to 2015 when Utica made a run to the Calder Cup Finals.

“It is an exciting time of the year. This is what we play for,” said Comets forward Chase De Leo, who had a career-best 56 points in 55 games. “There’s a lot of ups and downs in a long season. When it all comes down to it, this is the most important time and fun time of the year. It is not only for us, but for the fans and the city.”

The Comets’ challenge is a best-of-five series against Rochester, which has momentum after a two-game sweep of Belleville.

With the whiteout atmosphere returning to Utica, the first two games against Rochester are set for 7 p.m. starts Tuesday and Saturday.

“We feel like we’re ready to go. We feel like we’ve done our prep work and haven’t leaned too heavily on them. It is trying to find a balance (between rest and work). I think we did as good of a job as we could to make sure of our preparation,” Comets coach Kevin Dineen said Monday, noting he wasn’t enthused by the scheduling quirks. “We’re going to play one game in 14 (days) by the time we get to (Game 2), which is unheard of.”

“We need everyone to pull the rope in our direction and make sure that everyone does the right things,” said A.J. Greer, who was voted team MVP. “It is going to be a team effort.”

Here’s five things to know about the Comets:

Should the team advance, Utica has home-ice advantage through the Eastern Conference finals.

The fans have been a big part of the home success, players said. The whiteout atmosphere – in which fans wear white clothing – is expected amplify it.

“It was the loudest building I’ve ever played in (in 2015),” New Hartford native and former Comets forward Mike Zalewski said in a team release. “It was such a special run because we really came together as a team and gave everything in those playoffs and the fans recognized that and rallied behind us. It was like we became one big team – the players, the fans, and the city came together as one. Without the support we felt in the arena each night I don’t think we would have made it to the finals and had such a memorable experience.”

Of the 31 players on Utica’s roster, eight have playoff experience in the AHL and HL. Defenseman Robbie Russo and forward Frederik Gauthier each won Calder Cups.

Dineen, who won a Stanley Cup as an assistant with Chicago in 2014, has relied on the team’s veterans to help this season.

“For me, I definitely think it is good to be vocal and help out,” said De Leo, who has played 28 AHL postseason games. “This time of the year, it is experiences you have to go through together. When we’re in the battle, that’s when I can give my two cents. I try to lead by example and hope others follow.”

The Comets’ defense, with one of the fewest goals-against averages this season, will be key. Russo and Tyler Wotherspoon have been solid as younger players have emerged on defense.

The team has been helped by Nico Daws and Akira Schmid, who have each had solid first AHL seasons. Daws was 4-2-0 with a 2.81 goals-against average against Rochester. Schmid was 2-2-1 with a 3.63 GAA. Mareks Mitens, returning from injury, is also in the mix after playing 17 total games.

The numbers are factored in and goalie coach Brian Eklund is among those consulted when deciding who gets the start, Dineen said.

Utica played the last stretch of the regular-season without several regulars. They’re all back in the mix. Talented forwards Fabian Zetterlund, Alexander Holtz and Nolan Foote as well as Kevin Bahl, Nikita Okhotiuk and Reilly Walsh are expected to play key roles.

“There’s no egos, we’re all on the same page. You want to come to the rink and be with these guys all the time and also do things outside of the rink,” Comets captain Ryan Schmelzer said. “I don’t know if it is different from in the past, but this year it seems like it all has come together more than it has in the past. It is great to be part of.”

Gauthier (lower-body) has been out since April 1, but skated recently on his own. A decision on his possible return could be made in the next few days.

There was another new addition Monday with defensive prospect and Devils draft pick Shakir Mukhamadullin joining the team from KHL. He joins recent addition Chase Stillman, who is not available for the opening series.

The “high-end” prospect” will be evaluated as time goes on, Dineen said.

“Fully expect to see him,” during the playoffs, Dineen said.