Comets rally from early two-goal deficit but fall in overtime

In his first start in the AHL, Isaac Poulter helped the Utica Comets earn a point in the standings in an overtime loss at home against the Laval Rocket Friday night.

Comets rally from early two-goal deficit but fall in overtime 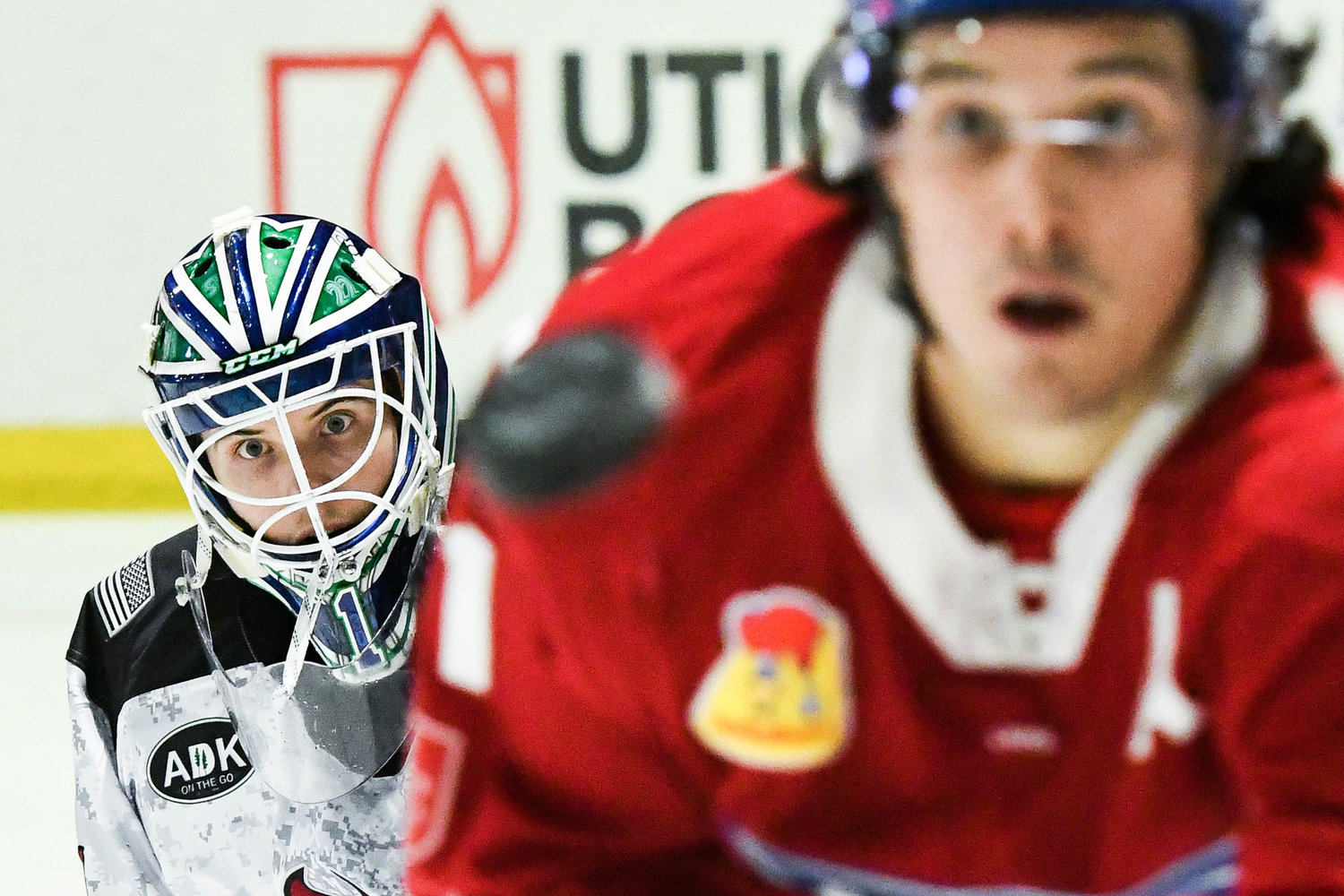 Utica Comets goalie Isaac Poulter, left, tracks a loose puck Friday at the Adirondack Bank Center against the Laval Rocket. At age 21, Poulter made his first AHL start and made 30 saves in the team's 5-4 overtime loss.
(Sentinel photo by Alex Cooper) 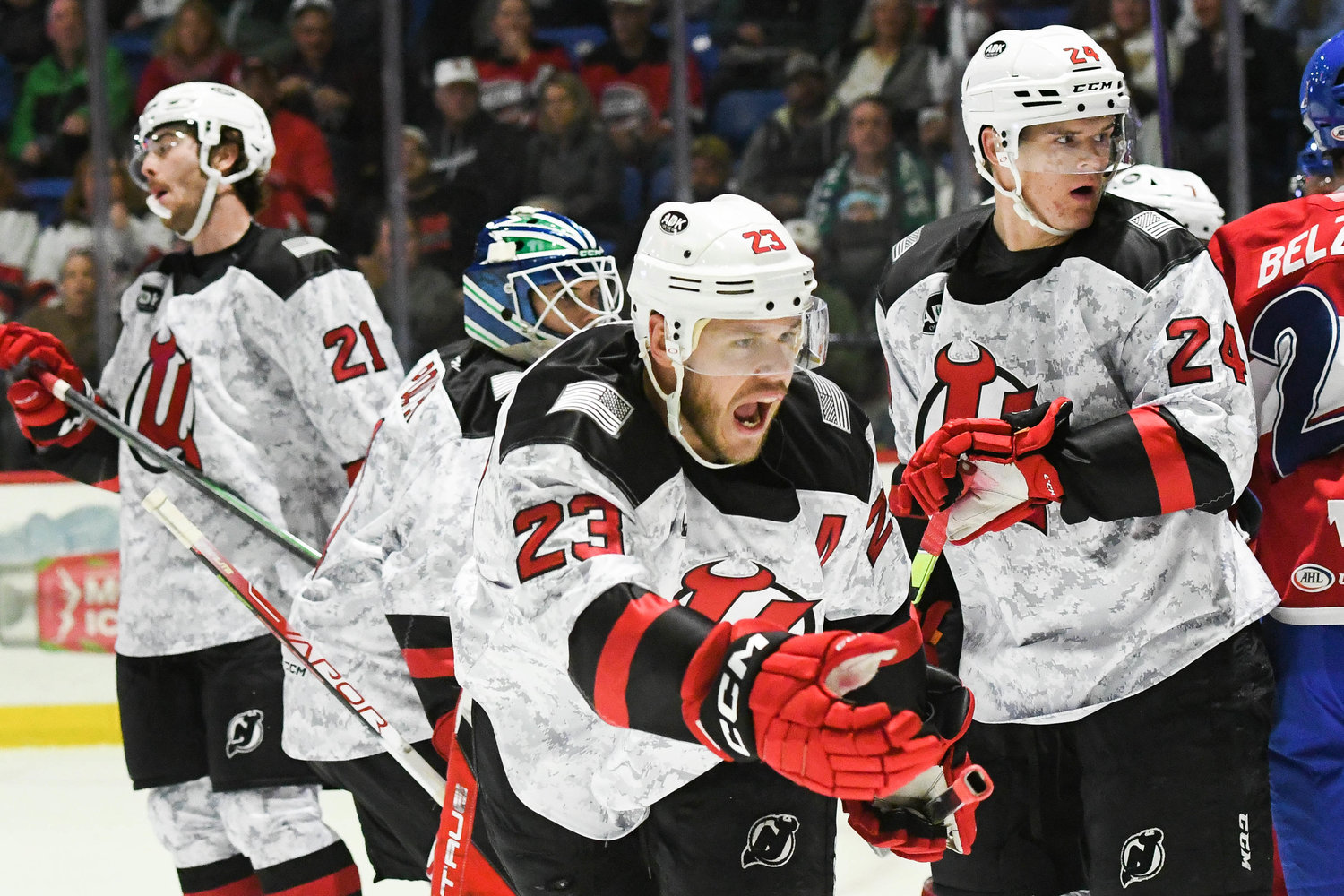 Utica Comets players argue a goal scored by Laval in the first period of Friday's home game. The goal was reviewed and upheld. The Rocket went on to get a 5-4 win in overtime on the road. From left are Nolan Stevens, goalie Isaac Poulter, Tyler Wotherspoon and Brian Halonen.
(Sentinel photo by Alex Cooper) 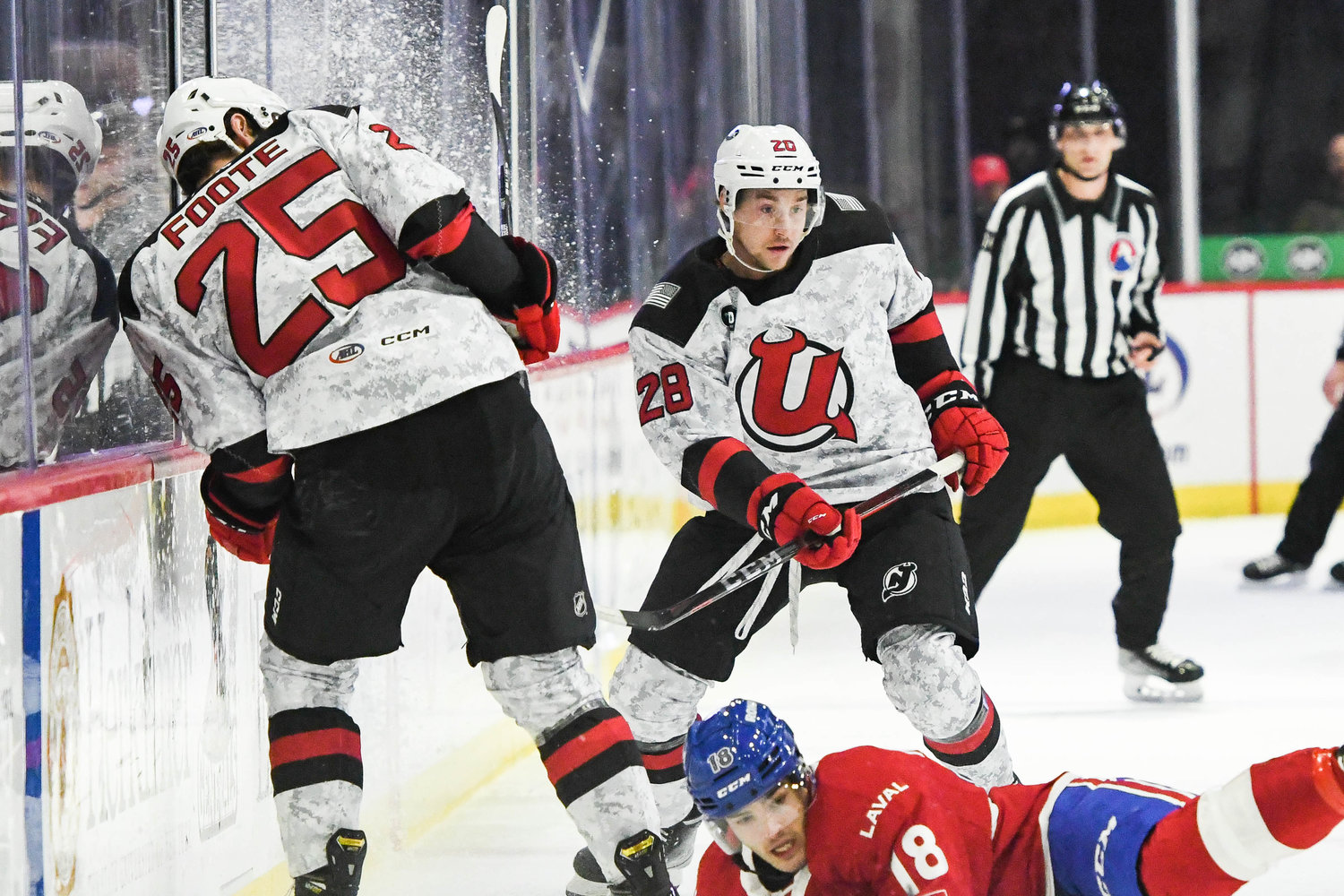 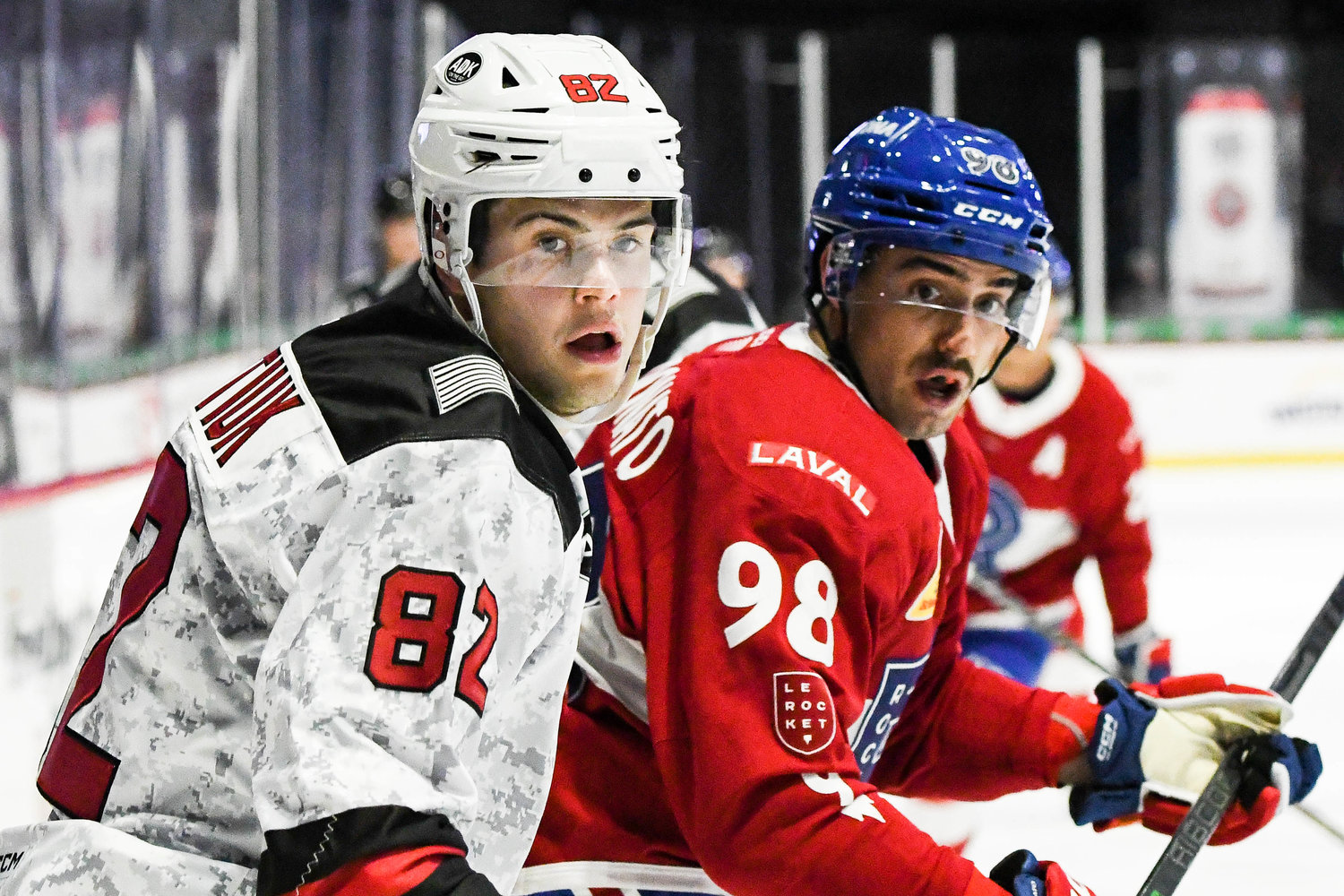 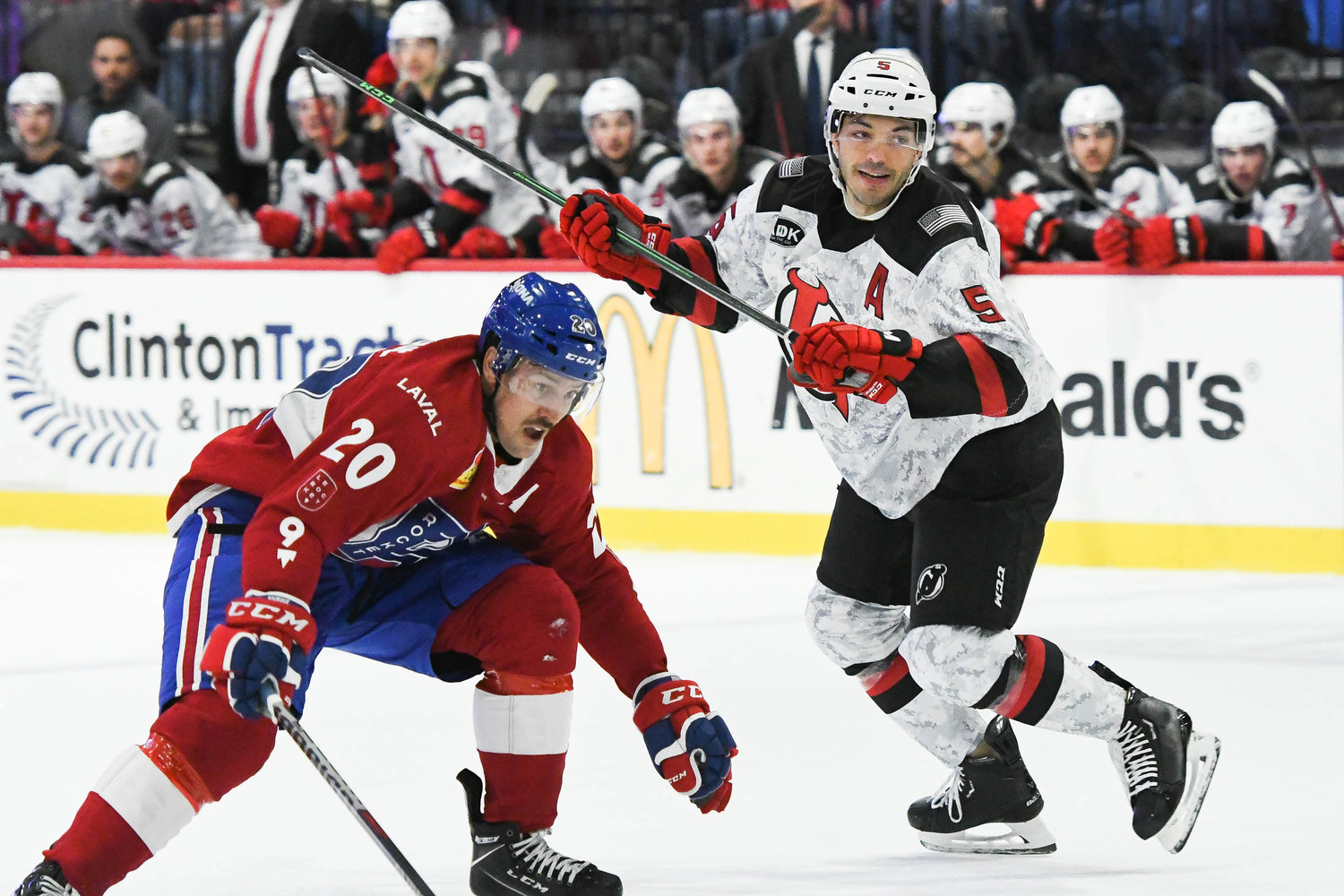 Comets defensemen Robbie Russo, right, and Laval Rocket Gabriel Bourque both have eyes on the puck in Friday's game at the Adirondack Bank Center in Utica. The North Division teams could not settle the game in regulation, with Laval winning 5-4 in overtime.
(Sentinel photo by Alex Cooper)
Previous Next
Posted Saturday, November 12, 2022 12:40 am
Steve Jones
Sports writer
email / twitter

In his first start in the AHL, Isaac Poulter helped the Utica Comets earn a point in the standings in an overtime loss at home against the Laval Rocket Friday night.

The North Division teams lit up the scoreboard for the first 40 minutes then, after a scoreless third period, Laval's Anthony Richard scored his second goal of the game with a minute left in overtime to give the Rocket a 5-4 win.

Poulter stopped 30 of 35 shots on a night when the Comets got the news from NHL parent club the New Jersey Devils that goalie Nico Daws was being called up. "I was happy with the way Isaac played. He got thrown into a situation tonight," said Comets coach Kevin Dineen after the game. "He really made a statement in the third period, and in overtime made some quality saves."

Utica captain Ryan Schmelzer had nothing but praise for the 21-year-old netminder. "He's a great goalie," he said. "He made some huge saves for us tonight." Schmelzer added, "It didn't change our mentality as a team. We trust our goaltenders."

The Comets fell behind 2-0 but a burst of scoring at the end of the first period gave the hosts a 3-2 lead at the break. The teams combined for five goals and 27 shots (15 for Utica and 12 for Laval) in a lively 20 minutes.

Gabriel Bourque tallied his sixth goal of the season for the Rocket to open the scoring. He pushed the puck across the Utica goal line just before the goal came off its moorings. A review upheld the initial call. Richard's seventh goal of the season pushed the lead to two when he corralled a rebound and tucked it home with 7:17 left in the period.

Four minutes later the Comets' offense erupted. On the power play, Zach Senyshyn scored his second of the season when he tipped in a shot by Brian Halonen. Halonen got his first assist of the season and Simon Nemec earned his second.

With 1:45 left in the period, Samuel Laberge's strong effort tied the game. He skated from left to right between the circles, sprawled to get to the puck and then managed a backhanded shot over Laval goalie Kevin Poulin for his second goal of the campaign. Nikita Okhotiuk, in his second game of the season after recovering from injury, got his first assist. Aarne Talvitie also got an assist, his second.

Sixteen seconds later, Andreas Johnsson scored too, and it was his second goal for Utica as well. He took a pass from below the goal line and fired a shot as he went to one knee, beating Poulin to give the Comets the lead. Captain Ryan Schmelzer earned his fourth assist and Halonen got his second of the period.

"I though we actually had a pretty good period," said Dineen of the first frame. "I think it was one of our best periods." But, he added, the team gave up "quality opportunities."

Of the first period, Schmelzer said after the game: "I felt like we were playing well, just a couple mistakes here and there. We felt like we were in the game and there was a ton of time left. So you can't change your plan, change what you were doing. You just stick with it. And we just had a good response. And I like to see that from this group."

The teams combined for a shorthanded goal, a power-play goal and an even strength goal in the second period. Two of the three were Laval tallies, putting the score at 4-4 at the second intermission.

Four minutes into the period, Danick Martel scored his first goal of the season on a shorthanded, two-on-one.

Comets' leading scorer Brian Pinho got Utica back in front with his seventh of the season, this one on a five-on-three power play with 7:38 left in the period. He took a cross-ice pass from Johnsson at the left post and deposited the puck in the net. Johnsson and Graeme Clarke earned assists, Johnsson's sixth and Clarke's third.

Xavier Simoneau re-tied the game with just over a minute left when he fired a wrist shot past Poulter from between the circles.

Neither team could find a goal in the third period to win in regulation. Poulter made two top notch saves in the final five minutes to keep the game tied, first moving from post to post to make a shorthanded save then with just under two minutes left he pushed a shot up and over the crossbar.

In overtime, Richard struck again, this time on a breakaway wrist shot in the three-on-three format with one minute left.

The Comets' power play scored twice on six chances, but also surrendered a shorthanded goal. "Even though we scored two power-play goals, the power play didn't give us the energy we needed coming out of those," Dineen said.

Overall the offense is "still a work in progress. We need a little more consistent effort," Dineen said. "We're most effective when we can play four lines (with) six (defensemen). Roll things over. Right now I think specifically on the defensive side we have to find that trust."

Schmelzer said the offense is "starting to click a little bit. We have struggled to score some goals early in the year. But you can see some chemistry being built with some of the guys." Most players are finding their roles, he noted. "I thought it was a good showing. We put up four. Obviously, you can't let up five." He added, "We have to figure out how to hold onto these leads."

The Comets play next on the road against the rival Syracuse Crunch at 7 p.m. Saturday, Nov. 12.