There have been some early learning experiences for the Utica Comets. 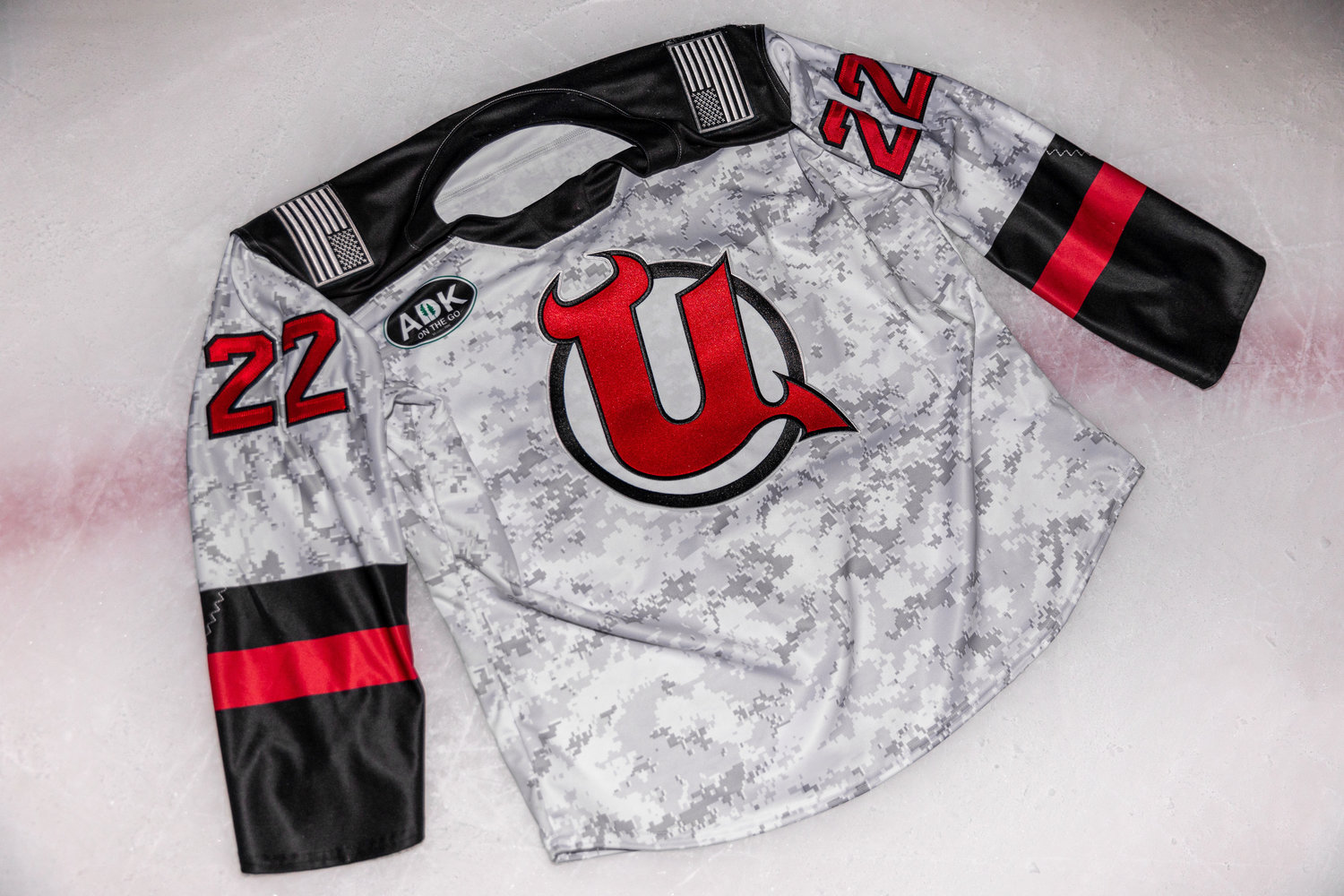 This is an example of the jersey the Utica Comets will wear for the Veterans Day game Friday against Laval. It is one of a few times the Comets are scheduled to wear jerseys featuring the old Utica Devils logo.
(Photo courtesy of David Herman/Utica Comets)
Posted Thursday, November 10, 2022 8:30 am
Ben Birnell
Sports writer
email / twitter

UTICA — There have been some early learning experiences for the Utica Comets.

That will certainly happen for a team that has had more than half its eight full games end with a one-goal margin. The team is 2-2-0-1 in one-goal games this season.

There have been some growing pains as the Comets gave up leads in losses to Providence and Rochester on Friday last week. Though, the team did hold on to its advantage against Rochester on Saturday to go 1-1-0-1 during the stretch.

It is a good learning experience for the Comets (3-4-0-1, 7 points), who are trying to move up the North Division standings.

“Mistakes happen and you learn from it. It is for everyone. It is sucks, but it will come,” said third-year forward Nolan Foote, who acknowledged he remembers the Comets giving up a couple leads last season. “Off the ice and in the locker room, the guys are great. The veterans are great. On the ice, the chemistry among the whole team is building. I think that helps us play better.”

Utica has key games on tap at 7 p.m. Friday against visiting Laval and another at 7 p.m. Saturday at Syracuse. Entering Wednesday, the three teams were at the bottom of the seven-team North Division.

The Comets have been helped by the defensive group with veterans Tyler Wotherspoon, Robbie Russo and Dylan Blujus as well as New Jersey prospects in Simon Nemec, Reilly Walsh, Michael Vukojevic, Jeremy Groleau and Nikita Okhotiuk.

“I think our breakouts are a strength of ours. I think our (defense) are not shy on pressure. I think they embrace it. I think they take advantage of playing against teams that give pressure. That comes along with the skill and composure,” Comets coach Kevin Dineen said. “I think our D have done a good job.”

Goaltending has been solid as well. Though, there has been change with Akira Schmid (1.97 goals-against average, .918 save percentage, 2-1-1) on recall with New Jersey Devils goalie Mackenzie Blackwood (MCL injury) out a few weeks.

That means Nico Daws (2.41 GAA, .908 SV%, 1-3-0) will shoulder the goaltending duties for now. Rookie Isaac Poulter is with Utica and Dineen said the plan is for him to be with the team “through this weekend and there will be an evaluation from there.” Mareks Mitens had recently been placed on ECHL injured reserve.

The team is looking for more consistency in the offense, with the Comets among the lowest-scoring teams early in the season. Brian Pinho leads the team with nine points.

“I think our forwards have been good, for the most part,” Dineen said.

The Comets are set to wear Utica Devils-related throwbacks for the team’s Veterans Day game Friday.

The jersey features the red, black and white “horned U” logo that was worn by the AHL team that played in Utica 1987 to 1993.

It is among the games this season that the Comets are honoring the 35th anniversary of the previous AHL partnership between Utica and New Jersey.

Similar to the jerseys the Comets have worn in past seasons for Veterans Day games, this edition has a camouflage base. This year it is a black, white and gray camo design. Last season, it was a brown camo design with red accents.

The jersey numbers are red to go along with red and black striping on the arms and shoulders.

Dineen said it is good to honor veterans, especially given the arena name includes Utica Memorial Auditorium. He noted that Rick Redmond, the arena’s chief operating officer, is retired from the Army.

“There’s a tremendous amount of respect for those who serve,” Dineen said.