Comets players get opportunity with Devils 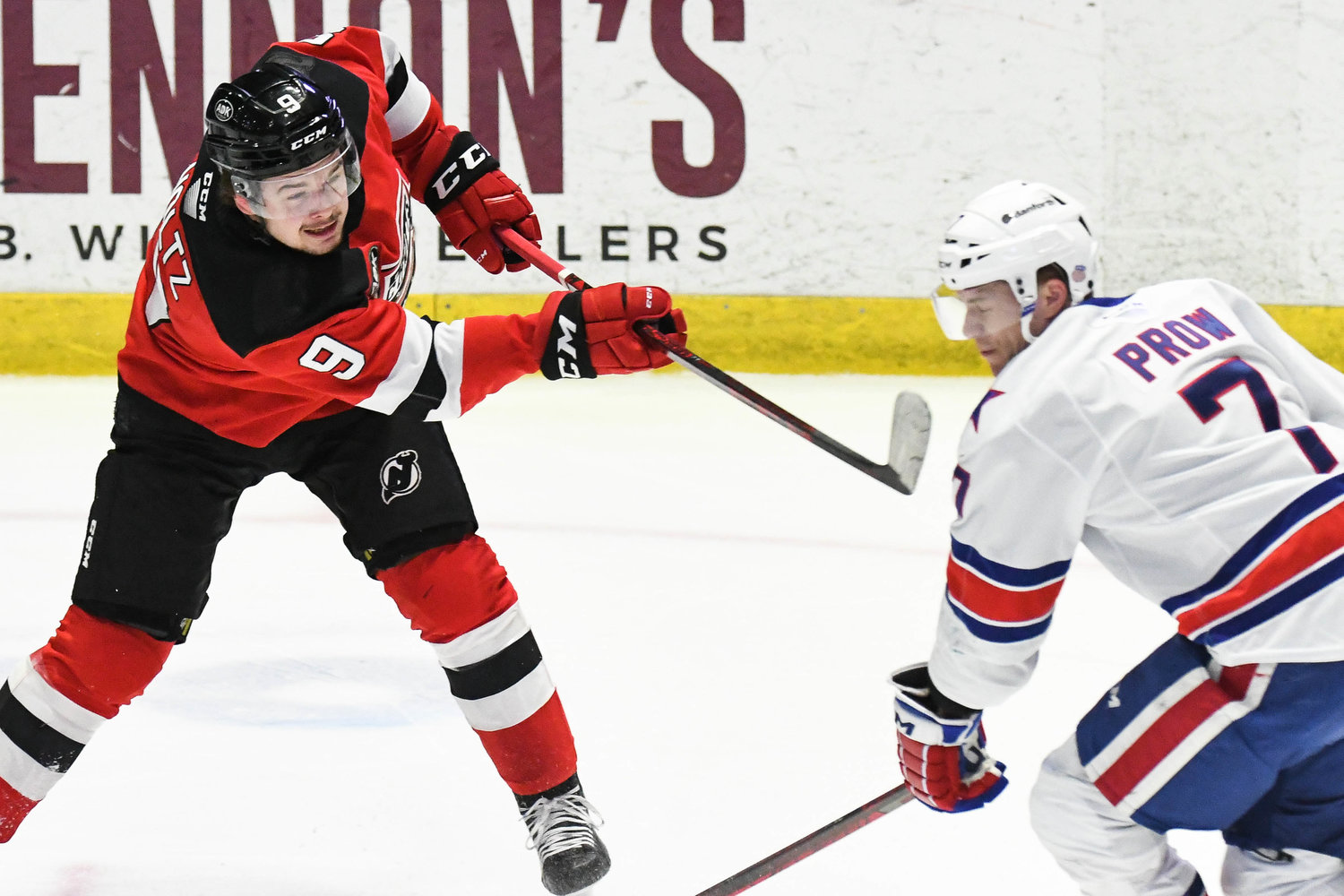 The objective for most American Hockey League teams is to develop players while trying to create a winning environment.

The Utica Comets have arguably made strides in both areas during the 2021-22 season. A total of six players have made their NHL debuts this season with the parent New Jersey Devils after spending time with the Comets this season. A handful of other players have spent time with New Jersey throughout season as the NHL club has had its ups and downs.

The Comets – led by coach Kevin Dineen, associate coach Sergei Brylin and assistant Ryan Parent – have had a hold on the top spot in the North Division for much of this season. Utica has a 42-19-8-1 record (0.664 points percentage, best in the Eastern Conference) with two regular-season games remaining this weekend. The team is aiming to make a playoff run.

With New Jersey’s season nearing a conclusion – the team has games remaining Thursday and Friday – some Comets standouts have gotten rewarded with an NHL opportunity.

“I can’t say enough about what (Dineen) and his staff have done to get these players ready when they come up to play. All of these guys have been important for us,” coach Lindy Ruff told media Tuesday.

Here’s a look at the six players – each eligible to return to Utica – currently with the Devils:

The Comets’ leading scorer became the latest to get a chance after the Devils announced he was recalled Wednesday.

The call-up isn’t a surprise considering the 20-year-old has been a key part of Utica’s success. The Swedish forward leads Utica with 26 goals and has 51 points in his first full pro season in North America. The 51 points are a Comets’ rookie record.

He made his NHL debut in November, playing seven games. Since then, he’s returned to Utica and honed his game.

He gets two more chances to score his first NHL goal.

The Swedish forward has been one of Utica’s offensive leaders with 52 points, despite missing the last eight games. He showed progress in his second NHL call-up, registering his first NHL point April 9.

The next game, he got his first career goal coming against Arizona in a second two-point performance.

The 21-year-old has had his ups and down this season, totaling 32 points though he missed time with Utica due to an injury.  He’s looking to continue to build confidence ahead of the playoffs in his second call-up. After going pointless in four previous games, had a two-goal game Tuesday.

The big 6-foot-6 defenseman has had three call-ups – totaling 15 games – and he appears to be playing with much confidence in the latest one.

A favorite among Utica fans for his physical style and puck-moving ability, Bahl has been paired with Dougie Hamilton with New Jersey. The 21-year-old also scored his first NHL goal April 12 as part of a two-point outing.

The physical defenseman has been a solid presence for Utica. He made his NHL debut April 21 and scored his first goal – he has three for Utica – in the game.

The 21-year-old Russian drew praise from Ruff for his play after that game.

The 23-year-old has been among the leaders in points for AHL defensemen for much of this season. He became the sixth Comets player to make an NHL debut on Tuesday.

He didn’t need much time to nab his his first point. He helped form a Comets connection on a goal with Zetterlund and Foote.

No Comets were among the six players on the AHL All-Rookie team released Wednesday.

The team is voted on by players, coaches and media from each of the league’s 31 cities.

The team includes two standouts from the rival Rochester Americans as well as Jack Rathbone, who had a short stint with Utica during the shortened 2021 season.