After what team captain Ryan Schmelzer called a bitter end to last season, the Utica Comets were back to work Monday for the first day of training camp. 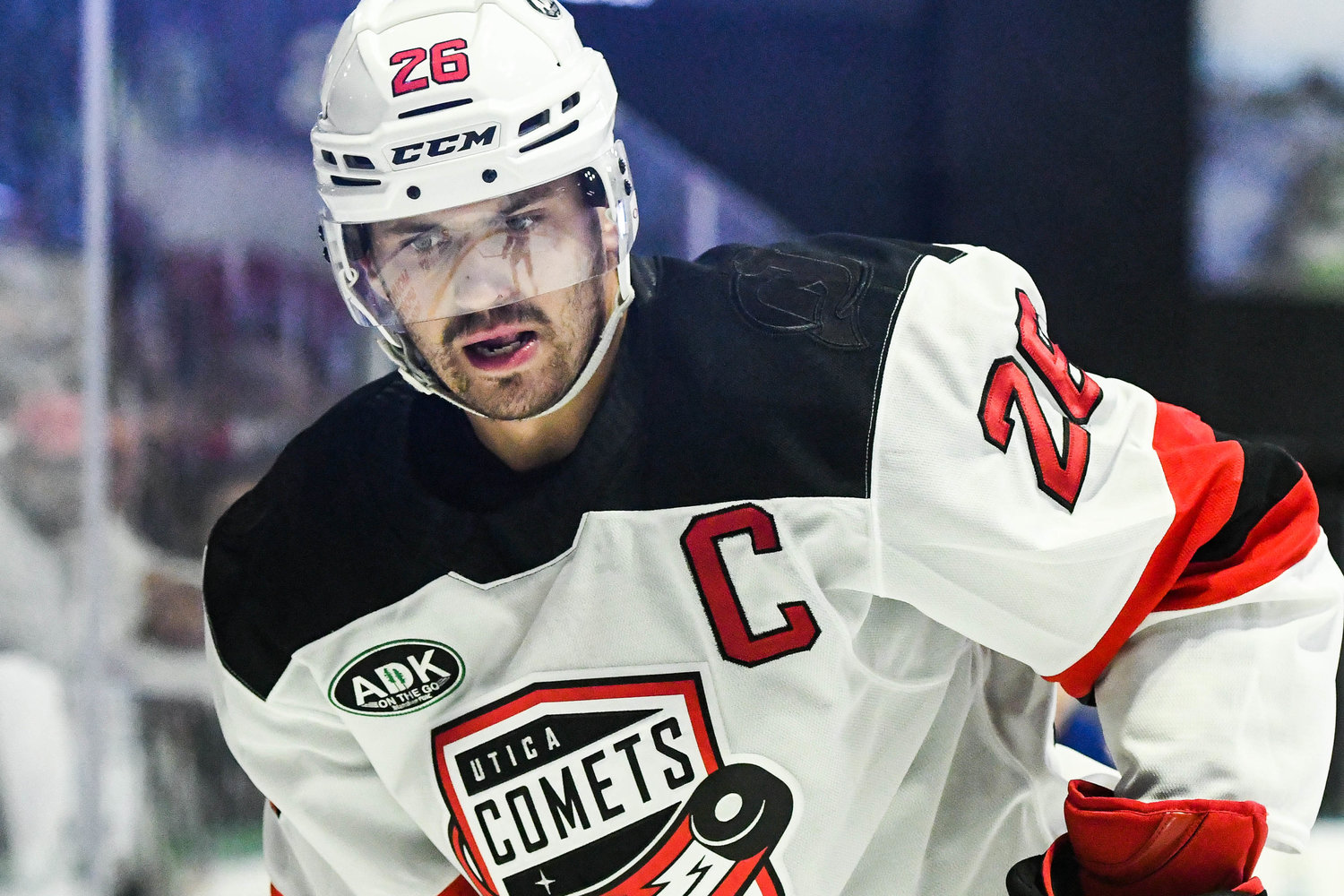 UTICA — After what team captain Ryan Schmelzer called a bitter end to last season, the Utica Comets were back to work Monday for the first day of training camp.

Seventeen players were on the ice Monday morning at the Adirondack Bank Center. The coaching staff was without head coach Kevin Dineen but everyone else was there too, including new addition Andrew Brewer, who replaced Sergei Brylin, who was the team’s associate coach last season.

Many of the players are new faces for the AHL affilate of the NHL’s New Jersey Devils. But a few return from last year’s first season with the Devils since signing a 10-year deal at the end of Utica’s eight years as the Vancouver Canucks’ affiliate.

Back are Schmelzer and fellow forwards Garrett Van Wyhe and Samuel Laberge. Nolan Stevens returns as well. He was a Comet for the 2020-21 season when the St. Louis Blues partenered with Vancouver to allow players from both franchises to play on the same roster. St. Louis’ AHL affiliate opted out of that season due to COVID-19. New in town among the forwards are Billy Jerry, Nick Rivera, Noah Corson, Sebastian Vidmar, Daniel Walker, Xavier Parent and Nick Hutchison.

Jarrod Gourley is the lone defenseman back from last year. Another, however, has been a Comet. Dylan Blujus returns after having already played three seasons when the Comets wore the blue and green of Vancouver. New in Utica are Filip Bratt and Ivan Chukarov.

Mareks Mitens returns as one of the two golatenders in camp. Isaac Poulter is the other.

Assistant coach Ryan Parent spoke after practice about the first day and looking ahead to a season building on last year’s North Division regular season title. “The biggest emphasis was on execution,” Parent said of first day expectations. “We had a good day.” And while there were “a lot of new faces,” about half the players did get some time together either at NHL camp or the Prospects Challenge tournament.

Tuesday’s practice, Parent said, would feature “a little more team stuff.” He said it helped having guys like Schmelzer, Blujus and Laberge as “leaders in the room.” He also noted that Brewer is a good fit with the coaching staff. Schmelzer later said Brewer “seems like a very intelligent guy” with an upbeat personality, who “seems like a great addition.”

Parent also said the first day of this preseason felt a little different than last season. He said it helped that this time it’s the same city, same staff and same building as last year this time, unlike when the Devils’ affiliate was in Binghamton two years ago. Combine that with coming off of the 2021-22 season’s 43-20-8-1 record (one of the best in the AHL last season), he said, and you have “a level of comfort.”

“It’s great to be back,” said Schmelzer, who wore a yellow “no contact” jersey at practice as he rehabilitates a surgically repaired shoulder. He said the process will take place with “baby steps,” with Monday being a chance to get on the ice and stick handle a bit. He had surgery almost four months ago to the day and the typical timeline for such a return is four to six months, he said. “I’m getting close and feeling good.” He said he’ll be in the yellow jersey the rest of this week then there will be an assessment. “I don’t think the first game of the regular season” has been ruled out as a possibility, he said.

The Comets open the season on the road Saturday, Oct. 15 against the Hershey Bears. The home opener takes place at 7 p.m. on Monday, Oct. 17 against the Wilkes-Barre Scranton Penguins. Before that, the team has two pre-season games — Friday, Oct. 7, at home against the Syracuse Crunch and two days later in Rochester.

“That’s the best part about the sport, meeting the people and building relationships with them,” said Schmelzer, a Buffalo native. “It’s going to be a fun year.” And, he noted, he’s assuming he’s still the captain of the team “unless I’m told otherwise,” but either way it won’t change his mentality, he added.

As far as the team and its talent level, Schmelzer said, “We still feel like a lot of the core is there,” and the team has the same goals as last year. Those who experienced last season’s first round playoff elimination at the hands of the Rochester Americans are still “a bit bitter about how we went out,” he said. But, this year’s team wants to meet and exceed last year’s achievements. “I don’t see why not.” However, “we did lose some big pieces,” he added. Gone are A.J. Greer and Chase De Leo (two of three Comets who scored 52 or more points last season), as well as one of last year’s alternate captains, Brian Flynn, he noted. But he said he hopes to see such contributors from last season as Nolan Foote, Tyce Thompson and Aarne Talvitie continue their growth.

The Comets have signed forward Zach Senyshyn to a one-year AHL contract for the 2022-23 season, the team announced Monday.

Senyshyn, 25, is from Ottawa, Ontario and was drafted 15th overall by the Boston Bruins in the 2015 NHL Entry Draft. The 6-foot-1, 205-pound right-handed forward played 16 NHL games scoring one goal and two assists with the Bruins and Ottawa Senators. Last season, he played with both the Providence Bruins and the Belleville Senators totaling 67 games registering 19 goals and 15 assists in the AHL. In his career, he has suited up for 259 AHL games scoring 59 goals and 54 assists.

Comets' GM expects 'competitive' team in 22-23
8 things to know about the Utica Comets' 22-23 schedule
Utica Comets' President: Outdoor game 'in the cards' in the future