Kevin Dineen has been around hockey for many years. Utica Comets defenseman Tyler Wotherspoon has appeared in more than 500 professional games. 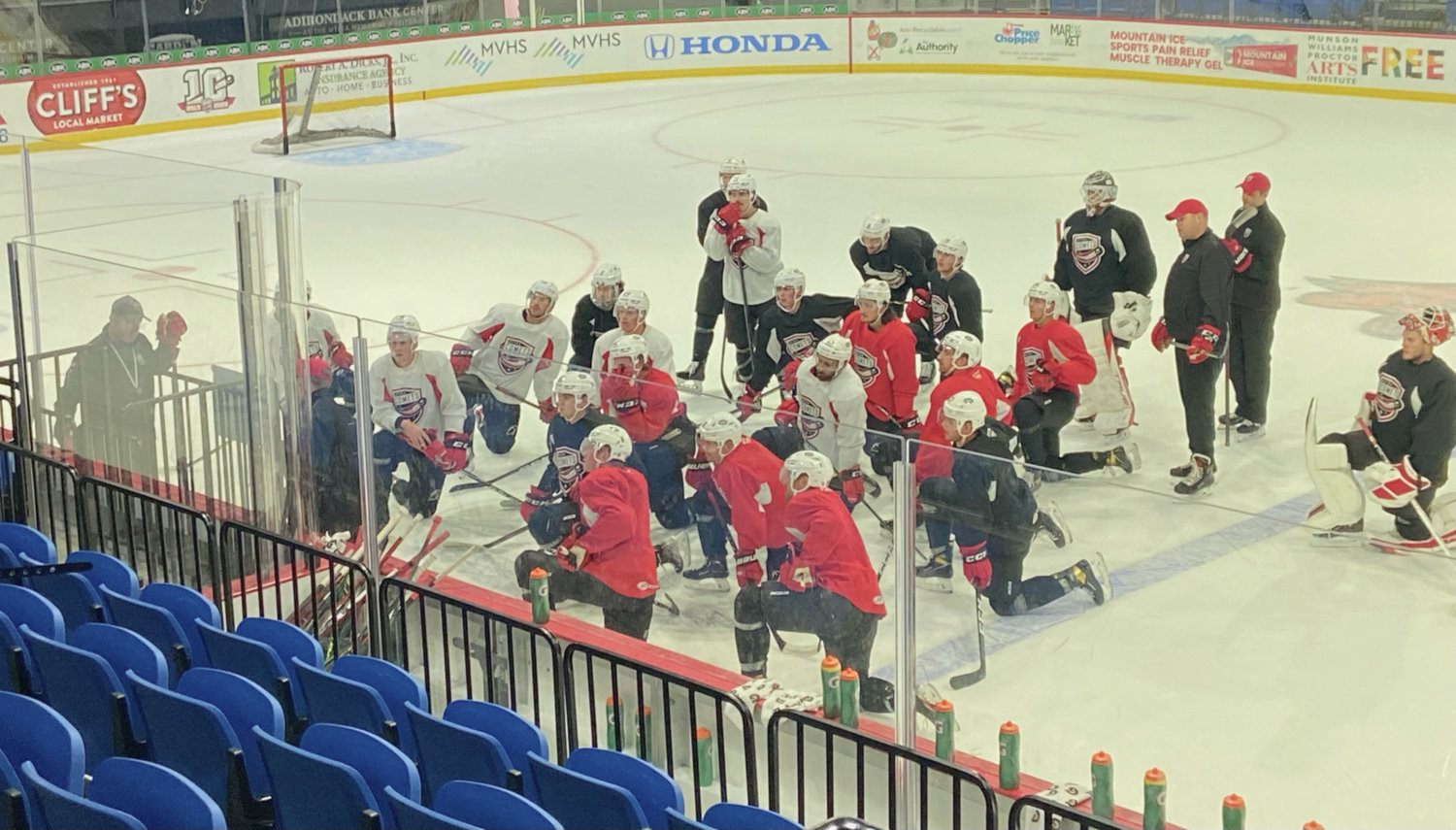 Utica Comets players listen during Tuesday’s practice at the Adirondack Bank Center. The team was back practicing after having Monday’s game suspended due to a power outage.
(Sentinel photo by Ben Birnell) 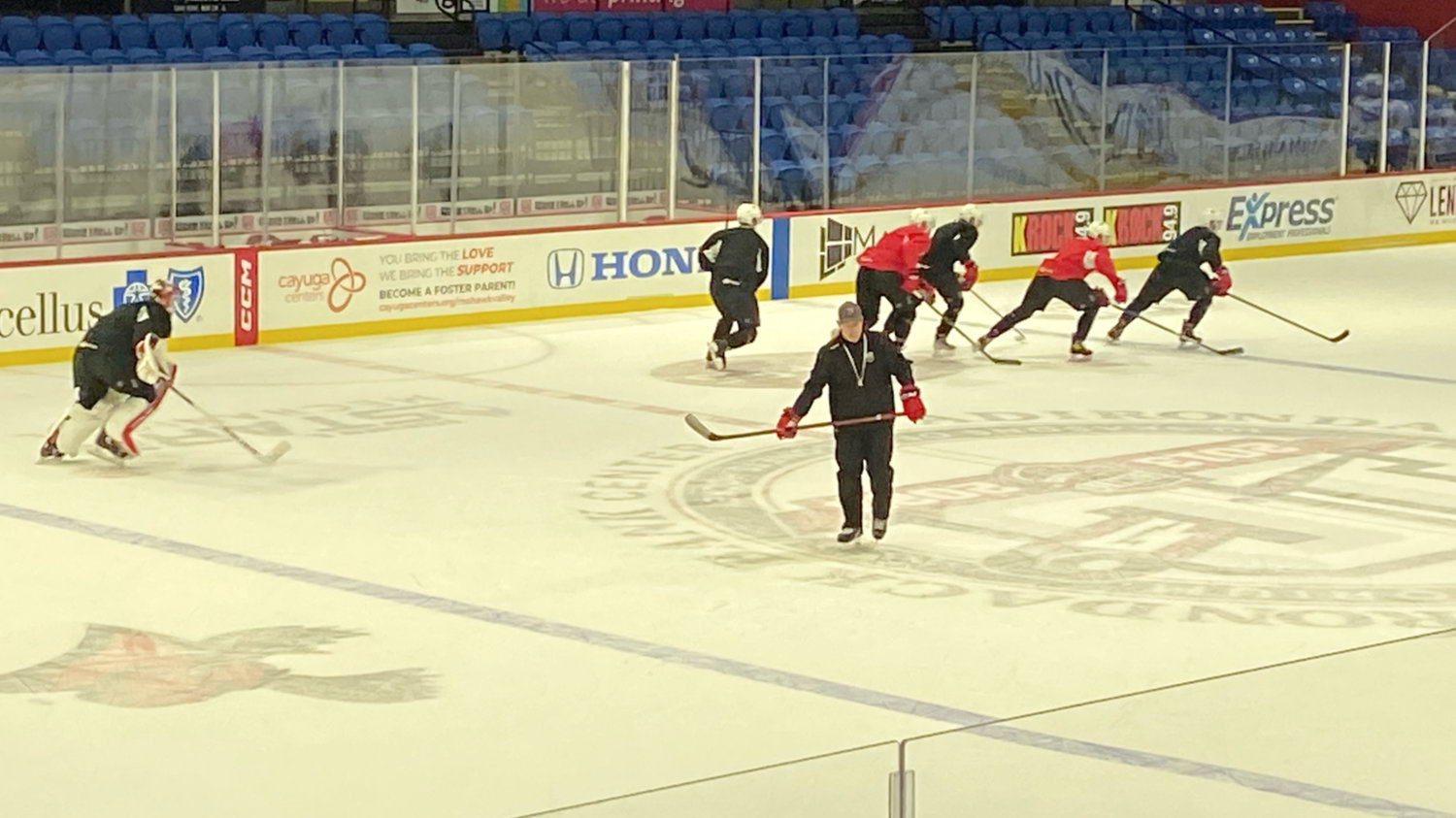 UTICA — Kevin Dineen has been around hockey for many years.

Having been around the sport that much, they’ve had an array of experiences. A power outage during the team's American Hockey League game against Wilkes-Barre/Scranton and the contest ultimately being suspended Monday as was the case for the Comets’ home opener at the Adirondack Bank Center? Well, that’s a new one.

“In the past I think we’ve seen where ice conditions have ended up canceling a game,” said Dineen, who is in his second year as Comets coach. “Unfortunately, at the beginning of the year, just like your hockey team, there’s always kinks to be worked out. I think as a group with the players and the coaching staff, we feel bad because our front office does such a fabulous job and there was such a great energy in the building.”

The 58-year-old Dineen, who has played and coached in the NHL and is in his ninth season coaching in the AHL, described the unique situation for fans and players as “like not having dessert.” Dineen said he feels bad for fans and players involved with the “special night,” which was one of a handful of games slated to honor 35th anniversary of the Utica Devils this season. The Comets and the Penguins are set to resume the contest at Tuesday, Jan. 24, in Utica.

“It is kind of crazy. It is disappointing to not be able to finish the game (Monday),” the 29-year-old Wotherspoon said Tuesday.

Wotherspoon was talking with an official on the ice about penalties being assessed in the game with 2:43 remaining in the second period when the outage happened. He said he’s experienced buildings that have had a partial power outage, but not a situation like Monday.

“The thought process (at the time) was trying to stay as focused as possible,” said Wotherspoon, who hoped they might finish the game at the time. “In times like that, it is tough. But, it is part of where if you want to win a hockey game, you have to stay focused on the task at hand.”

The team was back on the ice Tuesday morning at the Aud – power had been restored — preparing for the upcoming weekend. Utica has a scheduled home game Friday against Cleveland before another Saturday at Providence in Rhode Island.

Dineen said Tuesday had originally been set to be a lighter day. However, the staff changed some plans, adding some on-ice conditioning at the end of practice.

“I like our pace,” Dineen said. “I think there’s always some personnel chemistry that you’re searching for early in the year. I like the way we were playing our game (Monday).”

Schmelzer was on the ice Tuesday in a normal jersey as he continues to progress from offseason shoulder surgery.

He’s not quite ready yet, though, Dineen said.

“We’re excited to get him back in the lineup before the end of the month,” Dineen said.

Forward Nolan Stevens didn’t participate Tuesday and had a lower-body “tweak” against Wilkes-Barre/Scranton. He was being evaluated, Dineen said.

Defenseman Nikita Okhotiuk was injured in Saturday’s game at Hershey. He wasn’t present on-ice during Monday’s ceremony announcing the team.

Dineen described it as an upper-body injury for Okhotiuk.

“It is just a little precautionary,” Dineen said. “He most likely will be out this weekend.”