Comets lose in shootout as Bruins come back from down three

The Providence Bruins stormed back to overcome a three-goal deficit and beat the Utica Comets 4-3 in a shootout Wednesday night at the Adirondack Bank Center.

Comets lose in shootout as Bruins come back from down three 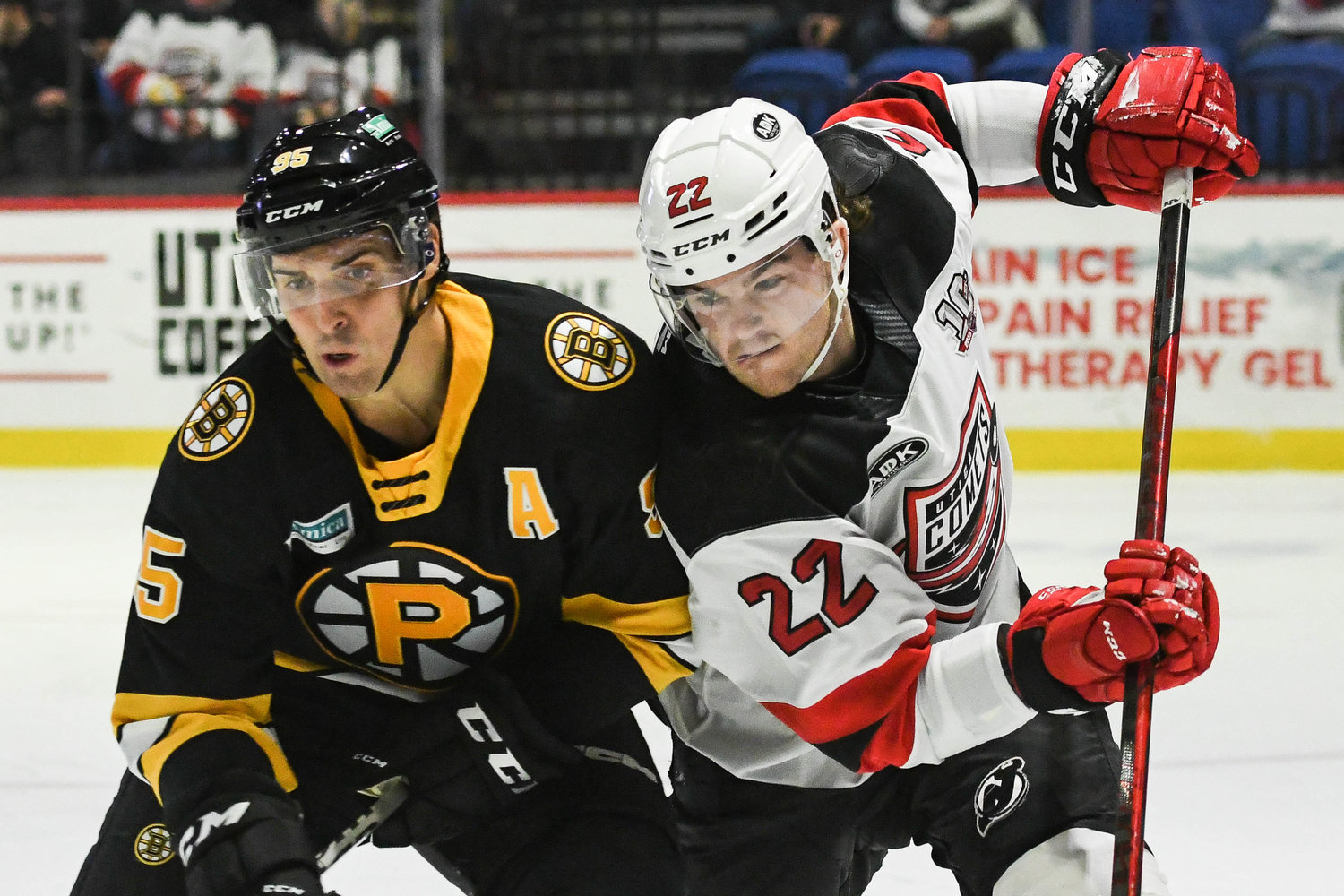 Utica Comets defenseman Reilly Walsh, right, fights for control of the puck with Providence Bruin Vinni Lettieri on Wednesday, Oct. 2, at the Adirondack Bank Center at the Utica Memorial Auditorium. Lettieri scored in the Bruins' 4-3 shootout victory. Walsh assisted on the first of Utica's goals.
(Sentinel photo by Alex Cooper) 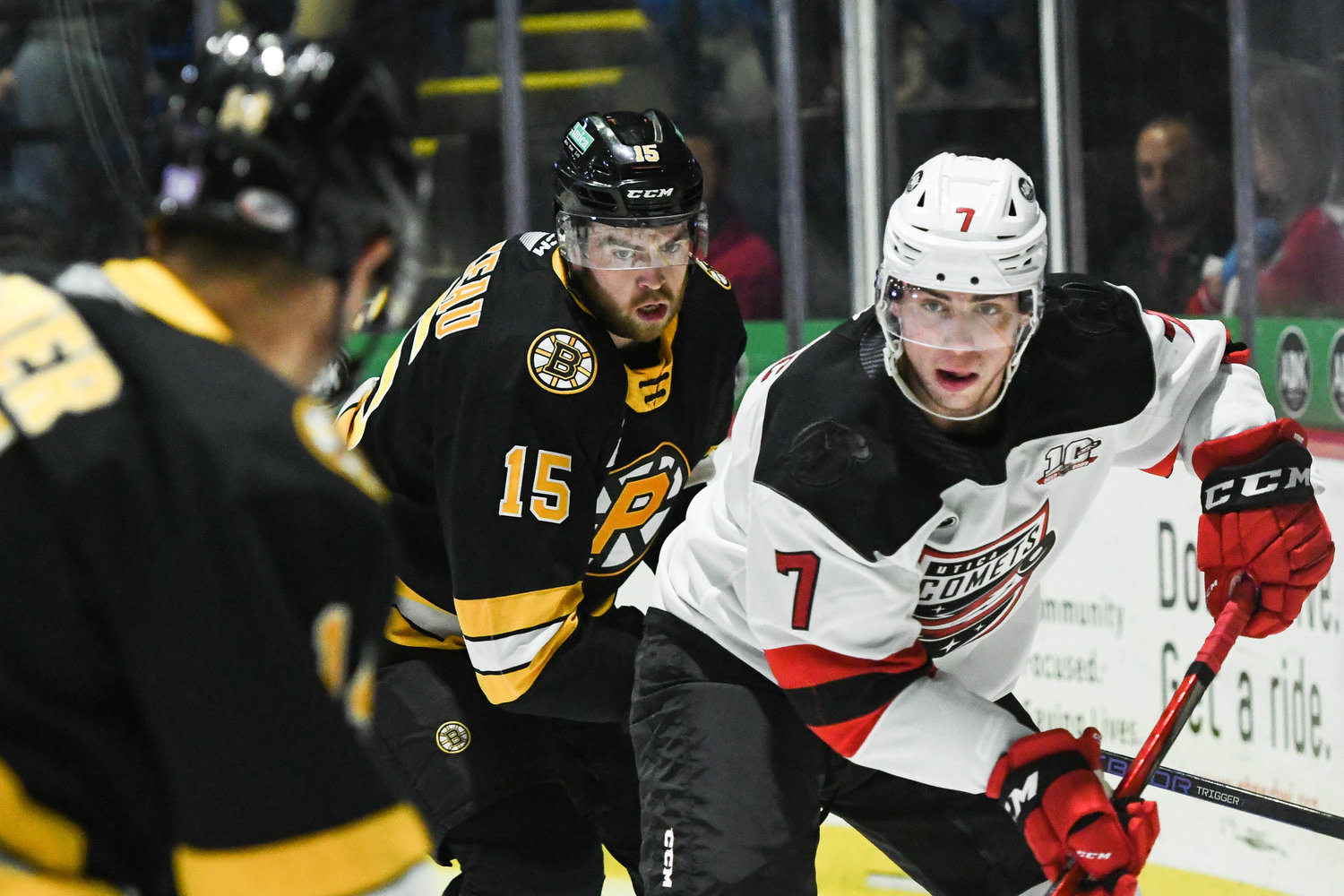 Utica Comets defenseman Simon Nemec, right, moves the puck along the boards Wednesday night against Providence at the Adirondack Bank Center at the Utica Memorial Auditorium. The Bruins fought back from down 3-0 to win 4-3 in a shootout.
(Sentinel photo by Alex Cooper) 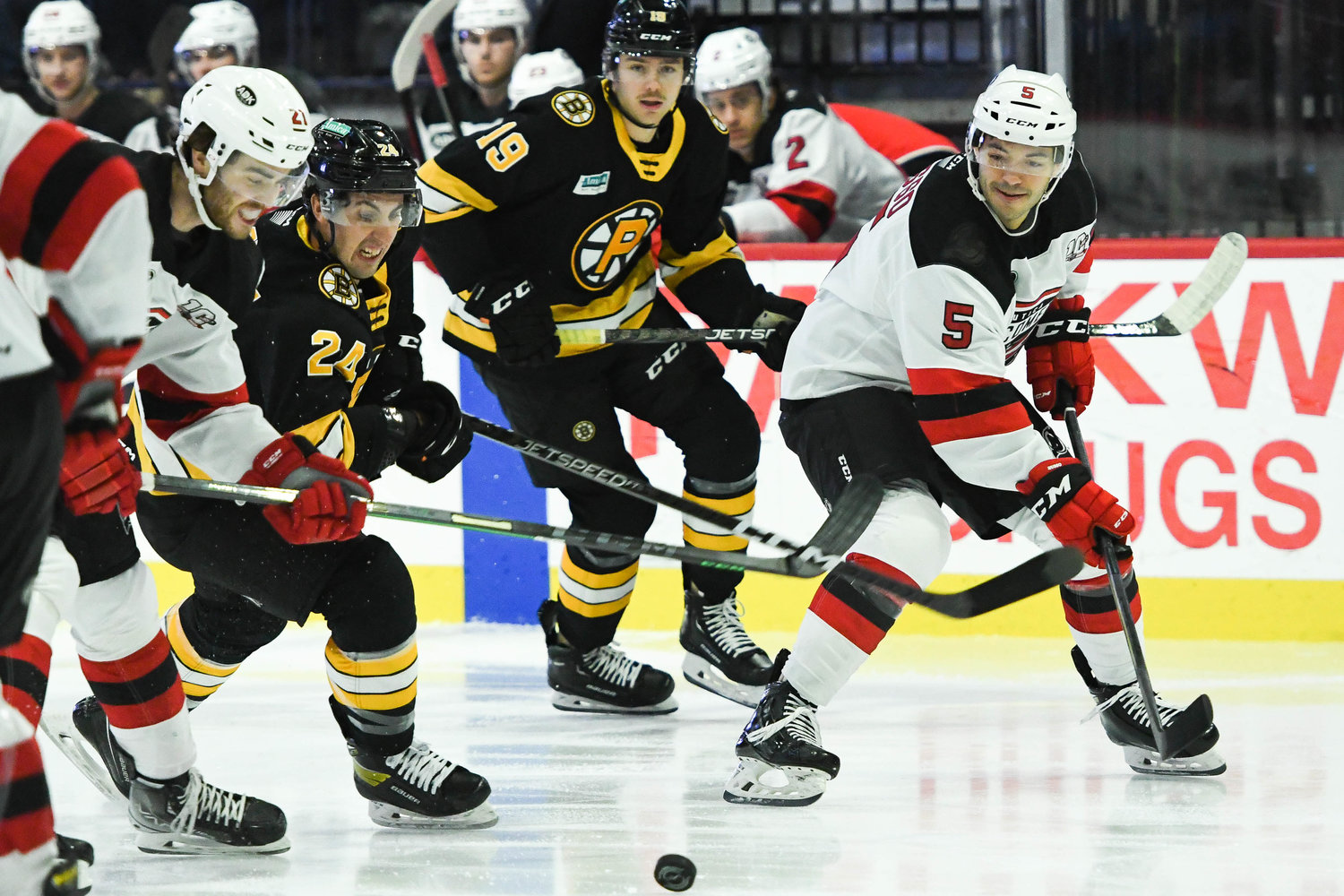 Utica Comets defenseman Robbie Russo (5) heads for the puck against the Providence Bruins on Wednesday, Oct. 2, at the Adirondack Bank Center at the Utica Memorial Auditorium. Providence won 4-3 in a shootout.
(Sentinel photo by Alex Cooper) 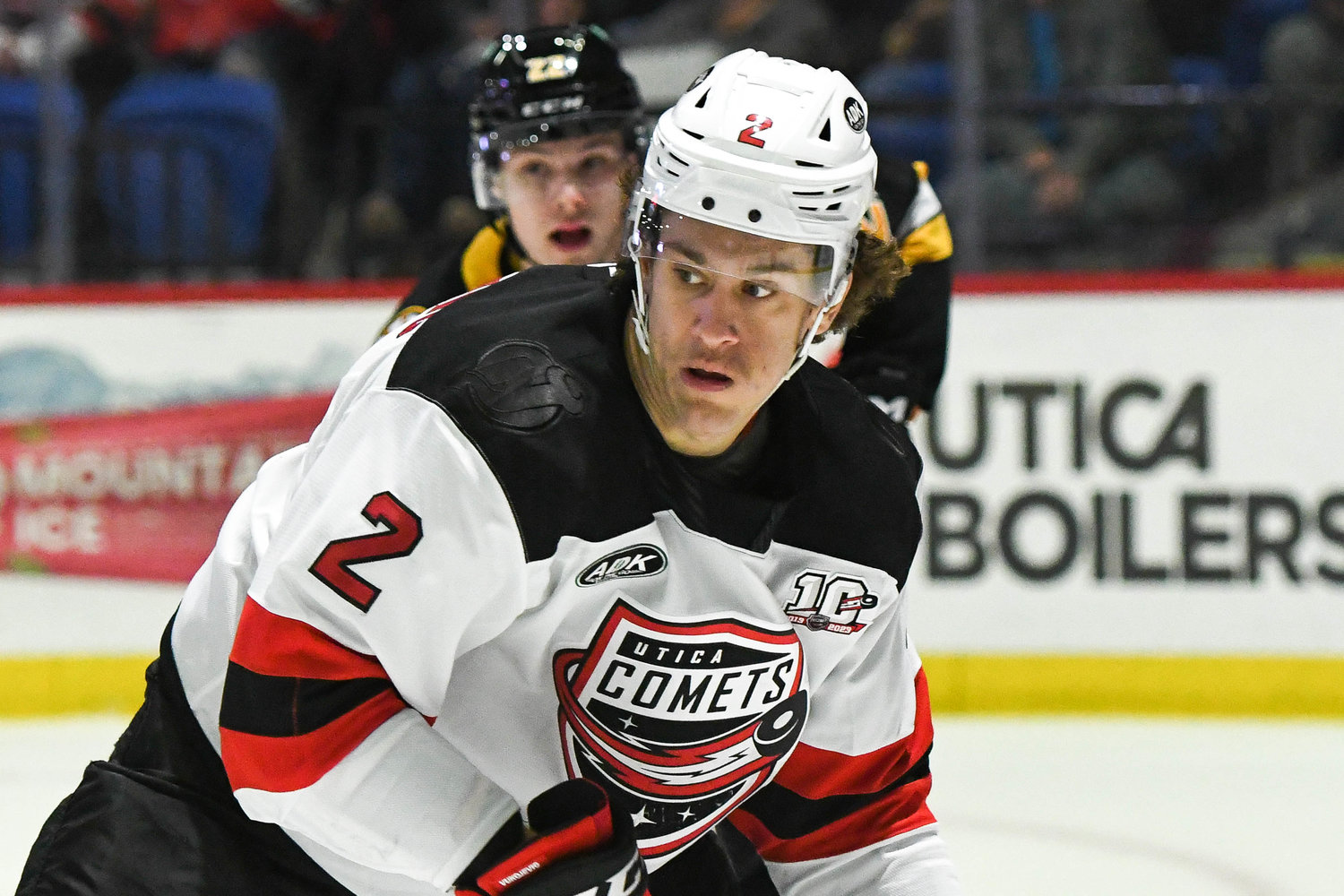 UTICA — The Providence Bruins stormed back to overcome a three-goal deficit and beat the Utica Comets 4-3 in a shootout Wednesday night at the Adirondack Bank Center.

The Comets scored on their first shot of the game to take a 1-0 lead with 8:09 left in the opening period. With an extra attacker on during a delayed penalty on Providence, the Comets had an extended sequence that led to the goal. Captain Ryan Schmelzer found Nolan Foote cutting to the net and hit him with a pass that Foote received before beating Bruins goalie Kyle Keyser. It was Foote's second goal of the season and assists went to Schmelzer, his first point of the season, and Reilly Walsh.

The Comets stretched the lead to three goals in the second period, with Schmelzer setting up those goals as well. Brian Pinho scored his team-leading fourth goal of the season 8:35 into the middle frame. Schmelzer made another entry pass to a teammate cutting to the goal. Pinho took the feed and deposited the puck into the net. Foote also collected an assist.

Zach Senyshyn scored his first goal as a Comet to make it 3-0 with 8:28 left in the second period. The tally, against the team he'd played on for five seasons, came on a pass from Schmelzer. Senyshyn skated between the faceoff circles and backhanded a shot past Keyser. It was Schmelzer's third assist of the game, with the other assist going to Jack Dugan. The third goal came on the Comets' eighth shot of the game.

Then the comeback started.

The Bruins trimmed the lead down to one goal by the end of the second period. First it was Luke Toporowski who scored when he found space behind the Comets' defenders and took a pass from the corner to score on his backhand from in close on Akira Schmid. Providence's leading scorer, Vinni Lettieri, struck for his sixth goal of the season, this one a power-play goal with 18 seconds left before the intermission. He rushed the Comets' net and managed to get the puck over the line as a bit of a pileup formed in Schmid's crease.

"I thought we played a good second period right up until the end and then structurally we had a major breakdown that ended up in our net," said Utica head coach Kevin Dineen after the game. "I thought they were both very preventable goals to let them get back and get some life."

Chris Wagner's third period goal with 2:41 left in regulation evened the game at 3-3. A long shot squirted through the pads of Schmid and Wagner pounced on the rebound, tapping the puck in for the score.

There were no goals in a wide open three-on-three overtime, and after Utica's last chance was turned aside just before the buzzer, the teams headed to a shootout. The first three shots each were not enough so the teams traded shots, with no one scoring in rounds four through 10. In round 11, Joona Koppanen finally scored for the Bruins and Keyser denied a last shot by the Comets to earn the extra point in the standings.

The goaltending matchup was one between two of the best in the AHL in goals-against-average. Schmid entered the game with a 1.68 GAA, second best in the league. Keyser's 1.71 GAA was fourth best. Keyser stopped 16 shots and Schmid had 27 saves Wednesday.

Of Schmelzer's three-point night in his third game back from off-season shoulder surgery, Dineen said, "It's good to have him back. He's our captain and he drives a lot of things on our special teams."

The team also got Nolan Stevens back after missing two weeks. Said Dineen: "Felt like his line was effective when they got on the ice. Generated some offensive zone time and were responsible on the defensive side."

Utica is now 2-3-0-1. The point the team earned pushed Utica into a three-way tie for fifth in the North Division, with two fewer games played than the Laval Rocket or Syracuse Crunch.

The Comets head out on the road to play against the Rochester Americans at 7 p.m. Friday. The teams then square off at 7 p.m. Saturday in Utica.