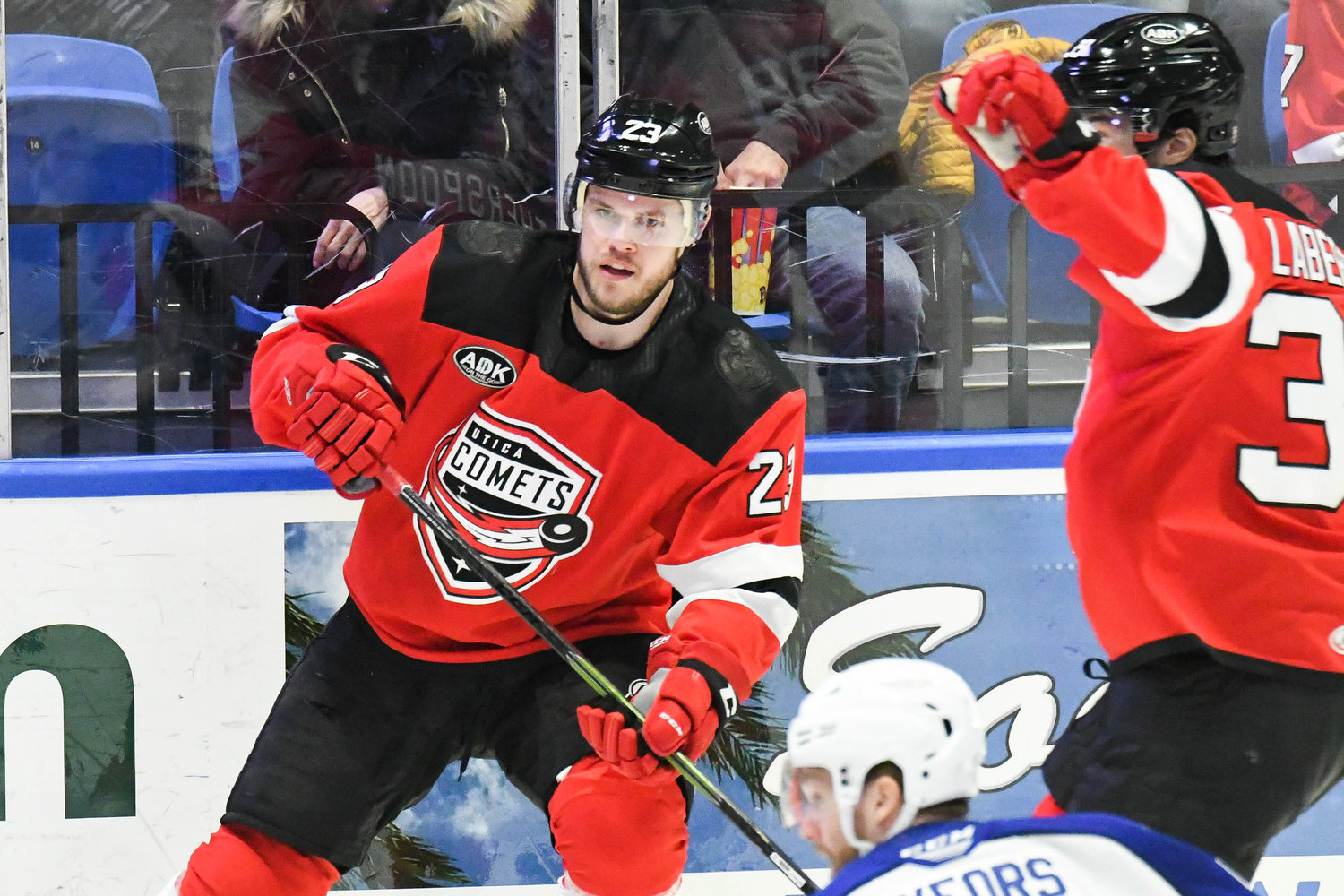 MAKING A PLAY — Utica Comets defenseman Tyler Wotherspoon (23) clears the puck away from the boards during a game against the Syracuse Crunch. Utica and Syracuse are set to meet for the final time in the regulation season at 7 p.m. Friday at the Adirondack Bank Center.
(Sentinel photo by Alex Cooper)
Posted Friday, April 15, 2022 8:00 am
Ben Birnell
Sports writer
email / twitter

UTICA — One of the most important goals for the Utica Comets this season has been to play meaningful games.

With help from that record 13 consecutive wins and impressive 17-1-2-0 start to the season, the Comets – featuring that blend of veterans and New Jersey Devils prospects in the first season of an affiliation deal – have arguably exceeded expectations and put some distance between them and the other six teams in the North Division.

Now with a playoff spot locked up and seven games remaining before the regular-season ends Saturday, April 30, there is still work to do. Comets coach Kevin Dineen said the team acknowledged the postseason trip earlier in the week after officially clinching Monday night when the team was idle.

“You clinch a playoff spot and it is an acknowledgement of your whole body of work instead of a couple weeks,” said Dineen, who will be making his sixth consecutive trip to the AHL postseason. “We worked hard to get there and it is nice to have the ‘X’ by your team name (in the standings). Now, you start to gear up for seven quality games left that help us get into that preparation mode for the playoffs.”

The idea is a team should go into the postseason with some momentum. Dineen acknowledged it has been “up and down” recently for Utica, which has lost a season-most four consecutive games (0-3-1-0). However, the team has been without a few key players for various reasons.

“There’s an emphasis as we get closer to the playoff season in that the development curve doesn’t lessen. But, it certainly gets into playing as a team. And, development goes hand-in-hand with winning,” Dineen said.

Heading into home games Friday against Syracuse – 11-2-1-1 in the last 15 games -- and Saturday against Belleville, Utica (39-18-7-1 overall) remains in first place in the North with a 0.662 points percentage and is the closest to clinching the division title. Laval, Syracuse, Toronto, Rochester and Belleville are in a tight battle for the other four North playoff spots.

“I think we have to be harder to play against,” Dineen said. “We have to do a better job at defending. … I think right now, we’re spending too much time on the defensive side. We have too much possession against us and we have to find a way to stop that.”

Dineen said there was “further evaluation” with Gauthier and felt the best course was not to rush him back before the playoffs.

Gauthier has been a key penalty killer this season and he had a goal and seven assists during a five-game point streak. He has missed four games since a collision in the third period against Syracuse on April 1.

McGrath, who has been in and out of the lineup this season, has a team-most six fighting majors. Dineen said that McGrath has some “strains” stemming from an April 6 fight against Belleville.

The Comets are set to give out a bobblehead featuring Dineen.

The team said it will give out 1,500 bobbleheads featuring the coach at Saturday’s penultimate home game, which is also “Roaring 20s Night.”

The bobblehead is a notable honor for the longtime former player and coach, who has been key to the team’s success. He could be in contention for AHL coach of the year.

He has moved up the AHL’s career coaches wins list this season. With 361 victories, he has moved from 16th on the AHL’s list to start the season to being one win from tying Terry Reardon for 10th.

Dineen would have also likely led the all-stars from the North Division this season at the league mid-season showcase, however the event was canceled because of challenges with COVID-19.