The Utica Comets got two reinforcements Tuesday when the New Jersey Devils assigned forward Alexander Holtz and defenseman Kevin Bahl to the team. 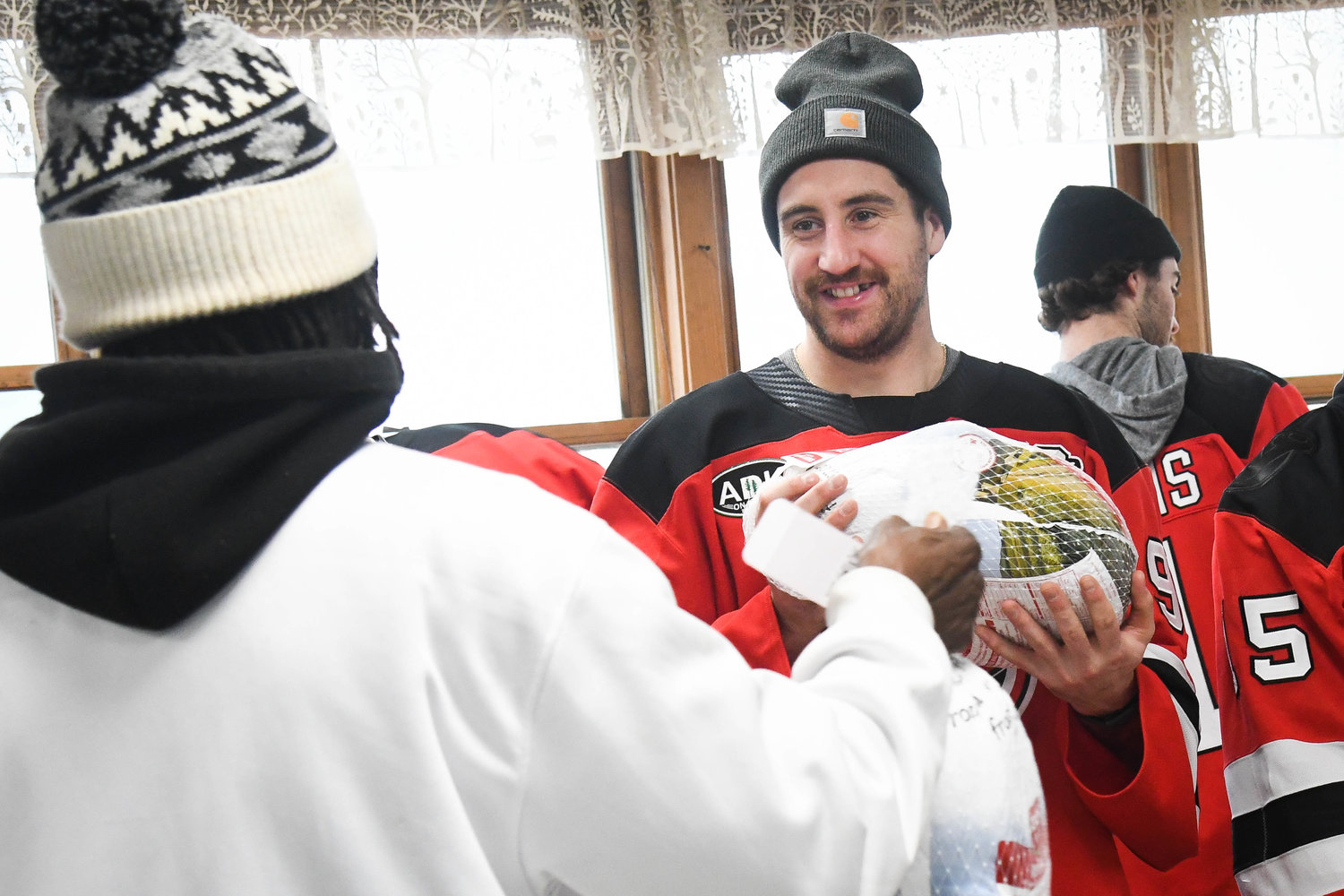 Utica Comets player Nick Hutchison helps hand out a turkey on Tuesday at the Utica Rescue Mission on Rutger Street. Players gathered to hand out turkey and other Thanksgiving food items to those in need, which is something the Comets have done in other seasons.
(Sentinel photo by Alex Cooper) 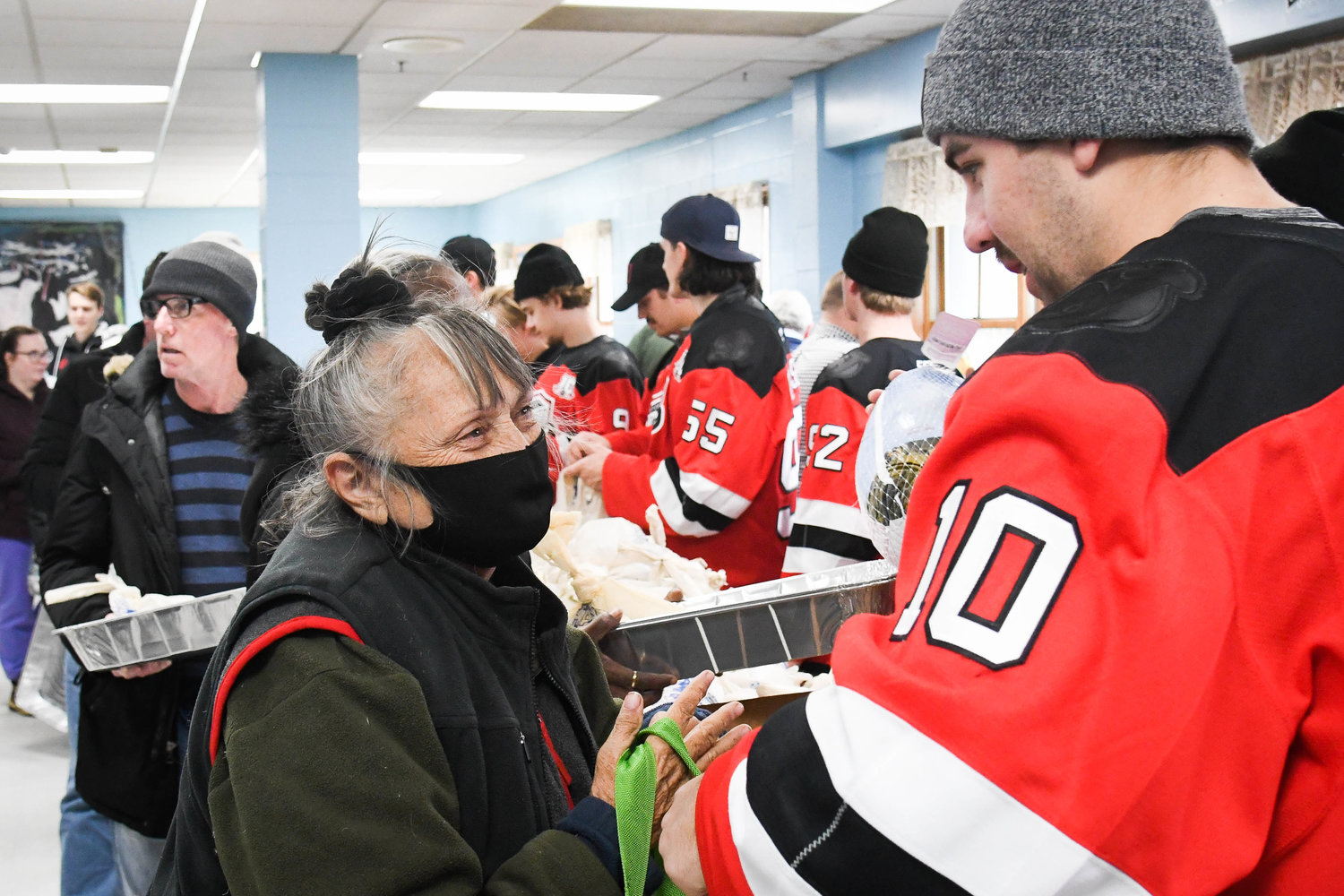 The move returns two major contributors to the team who helped the Comets win the North Division last season.

Holtz, 20, a first-round pick of the Devils in 2020, played 52 games for the Comets last season, scoring 26 goals and 25 assists, ranking him first on the team in goals and fourth in scoring. This season, the Stockholm, Sweden native suited up in four games for New Jersey, scoring his first NHL goal.

Bahl, 22, played in 54 games for Utica in the previous season, scoring three goals and 13 assists. This season, the Westminster, B.C. native played three games for the Devils without registering a point.

Both practiced with the team Tuesday and are expected to be in the lineup Wednesday when the Comets play the visiting Belleville Senators. Game time is 7 p.m.

Head coach Kevin Dineen said they should help bolster the lineup. “They played some strong, strong hockey for us last year. They’re still in their development curve but we’re excited to get the back our mix,” he said. “They’ve been around. They know this league. They know it’s a hard league and you can’t just feel your way into it. We expect them to jump right on board and get engaged with our group. It gives us a real positive jolt.”

Dineen said he’s eager to have Holtz’s enthusiasm and positive vibe in the locker room and will look for him to “generate chances and bring that enthusiasm that we just expect out of him being a young, vivacious kid.”

“I felt good,” said Holtz after practice Tuesday. “I’m pumped to be back. I’m pumped to play some games again.” He hadn’t played for the Devils since Oct. 25.

“Hopefully we’re going to win some games here,” Holtz said of the Comets, who are 4-6-1-1 and sit at the bottom of the seven-team division.

He also has his development to work on in order to get back to the NHL.

“I have high expectations for myself,” he said. “I want to get faster. I want my whole game to be more complete.”

One place Holtz can certainly make an immediate impact is on the score sheet. The Comets have among the fewest goals in the 32-team league with 2.75 per game.

He said he’ll be looking for opportunities to shoot but will still have to make good plays and be responsible in all parts of the game.

Holtz said he practiced Tuesday on a line with captain Ryan Schmelzer and fellow Swede Andreas Johnsson. “It felt like we had good chemistry out there,” he said.

Then there’s the 6-foot-6 Bahl, a crowd favorite with his own cheering section that calls itself Bahl’s Army. Dineen said he has a “quiet demeanor about him” and has composure with the puck. And, he said, for the other team, it’s “no fun when you’ve got a guy that’s as physical as he is. He’s got his stick in the way and can make plays.”

It is unclear how long Holtz and Bahl might be with Utica. With the moves, the Devils have 20 players on the 23-man roster.

The Comets leave town for a two-game road trip to Charlotte to play the Checkers on Friday and Saturday before returning home for a Wednesday, Nov. 30 to battle divisional rival, the Laval Rocket.

Dineen said Belleville “come(s) at you hard,” and plays a physical game like the one the Comets see often from the Syracuse Crunch. Charlotte, he noted, is a skilled offensive team so, “We’re going to have to have some responsibility on that side of the puck,” he said of the Comets’ defense.

“We’re looking to get our game back in order and there’s no better place than in front of our home fans,” Dineen said.

Forward Aarne Talvitie practiced in a yellow “no contact” jersey after missing Saturday’s game. He will not travel with the team this weekend, Dineen said.