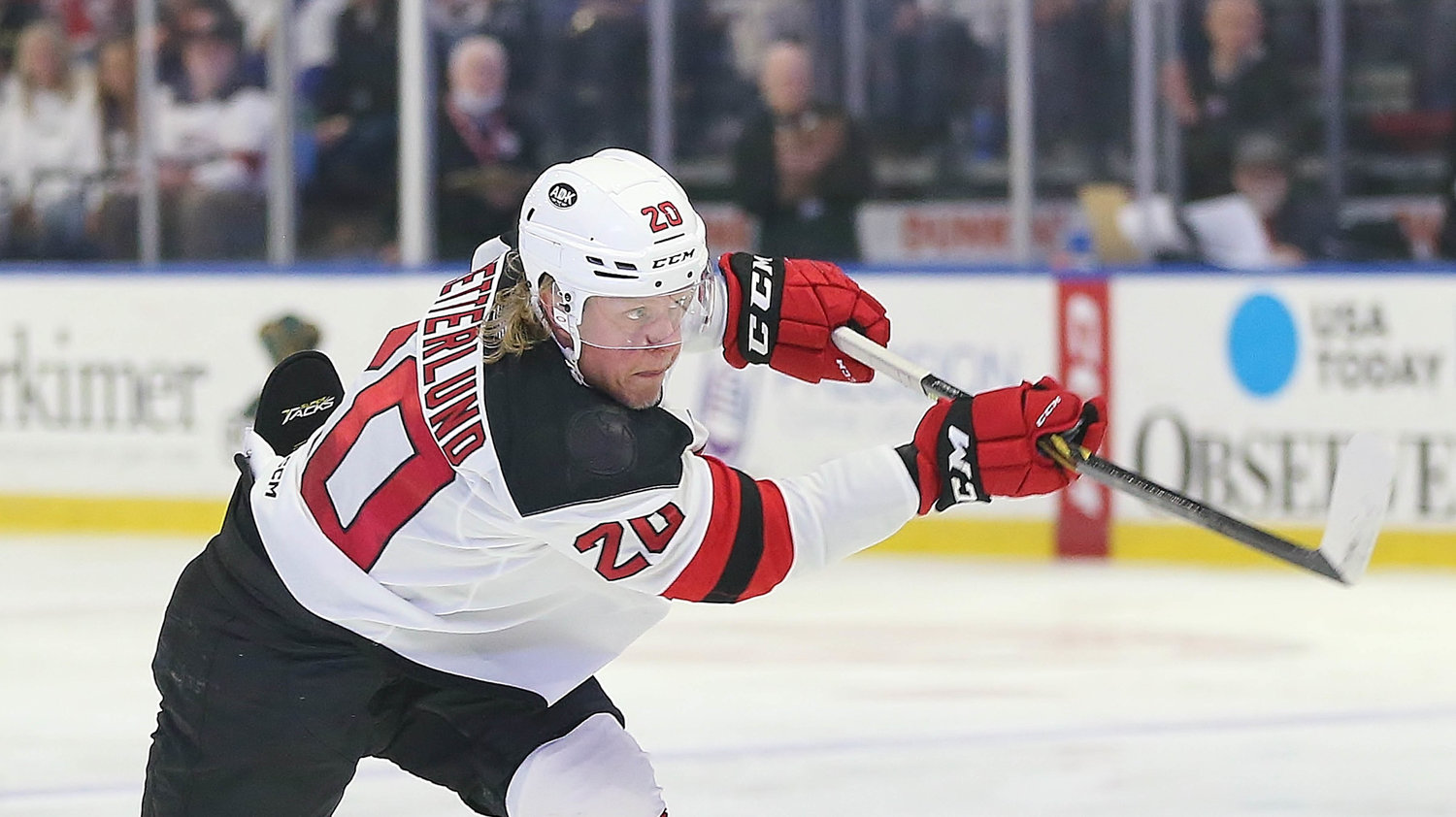 Utica Comets forward Fabian Zetterlund fires off a shot against the Rochester Americans at home Thursday in the deciding game of the North Division semifinal series. Zetterlund scored a goal to tie the game 1-1 but Utica lost 4-2 to end its season.
(Photo submitted by Comets photographer Jeff Pexton) 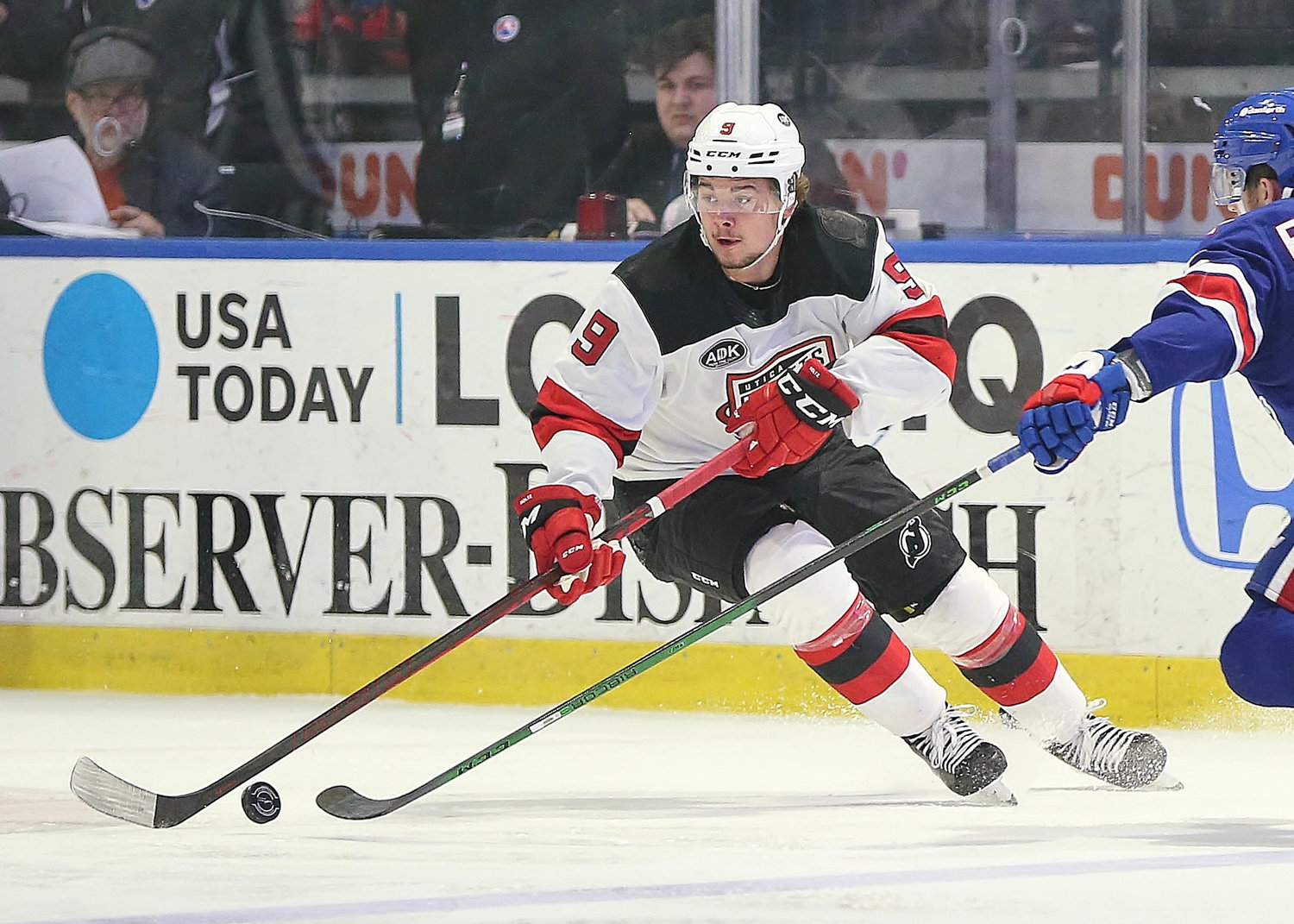 Utica Comets forward Alexander Holtz races ahead with the puck in Thursday's Game Five against the visiting Rochester Americans. Though Holtz gave the team a 2-1 lead in the first period with his first goal of the series, the Amerks scored the next three goals and won the game 4-2. That gave the fifth seed the series win as well.
(Photo submitted by Comets photographer Jeff Pexton) 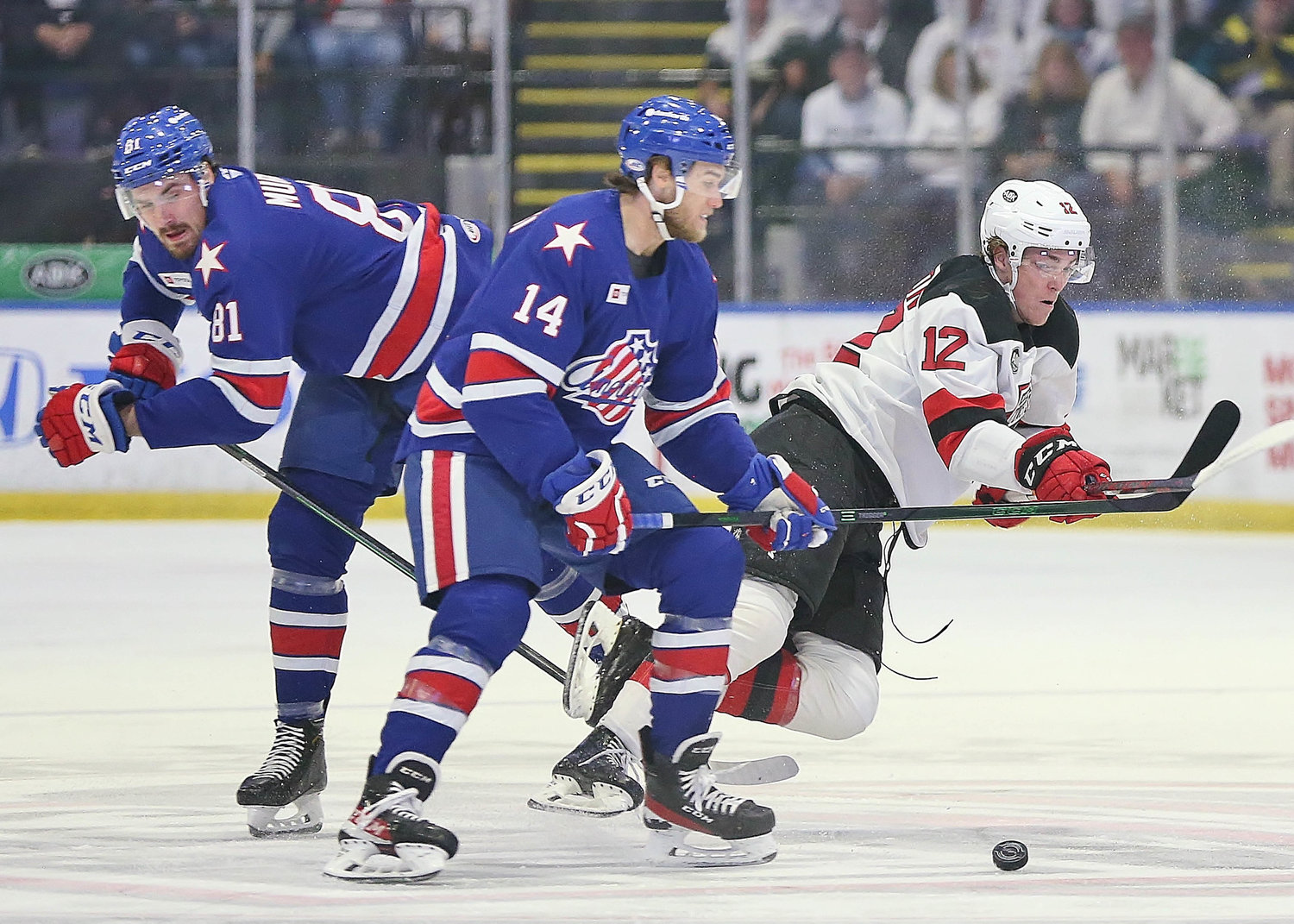 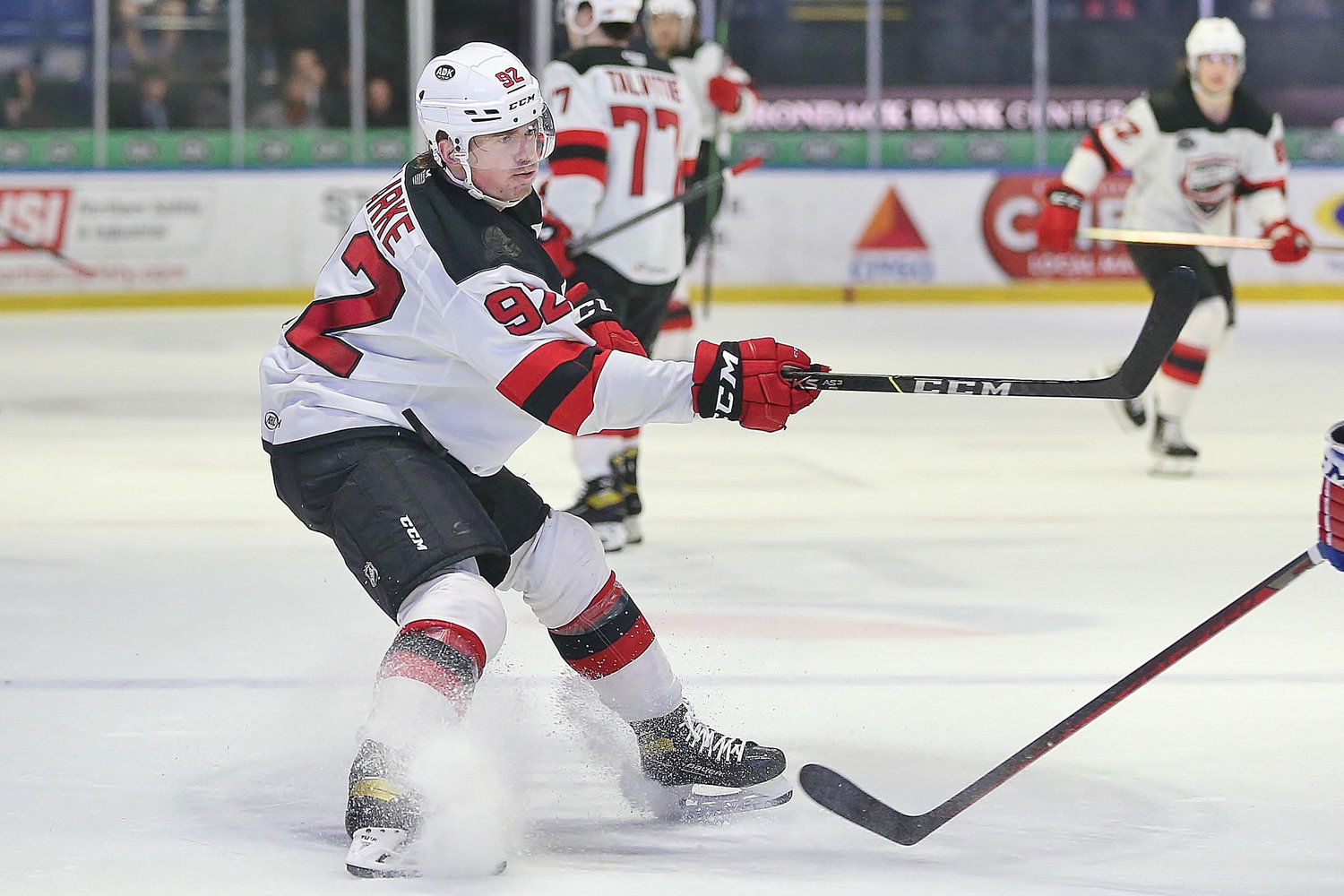 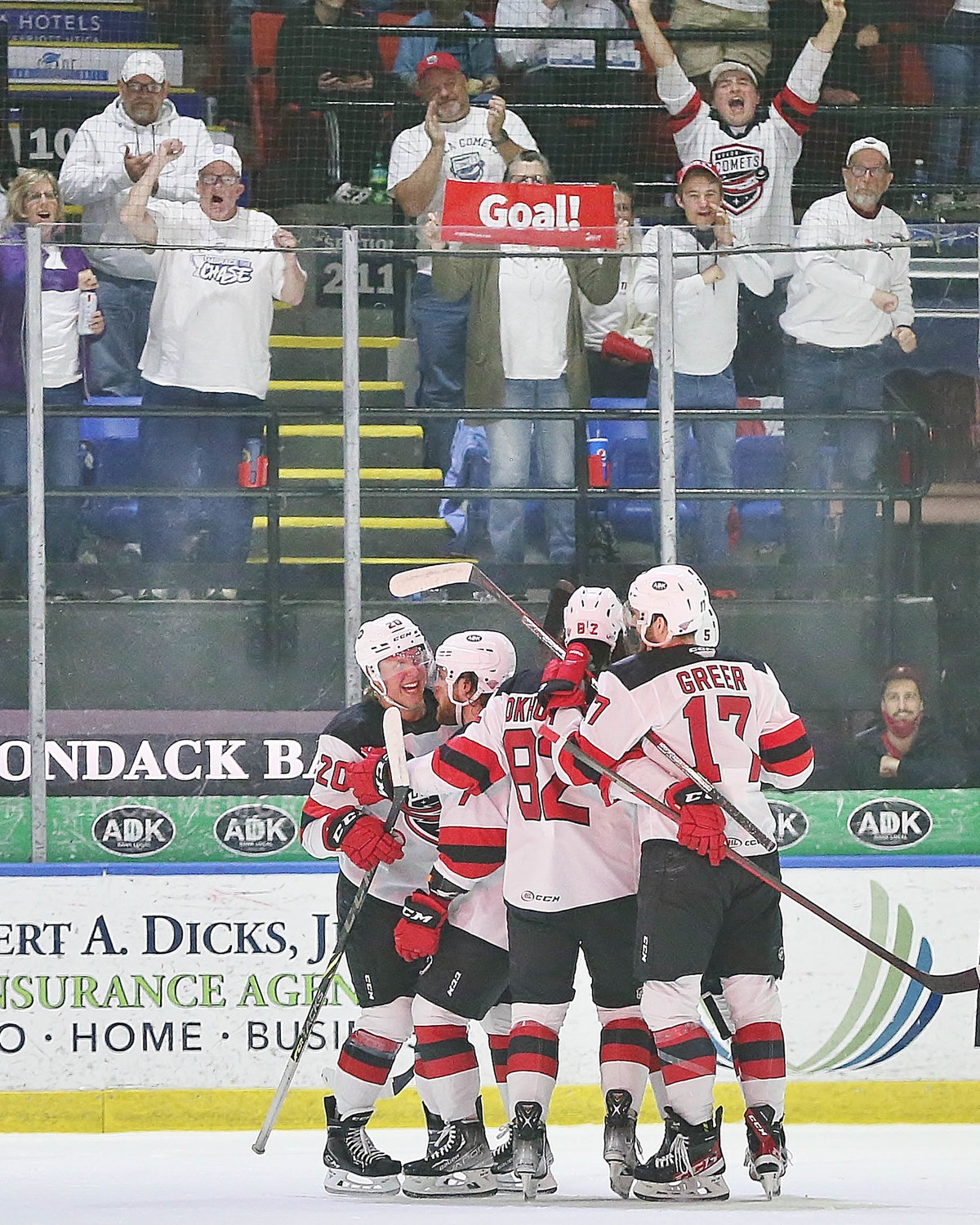 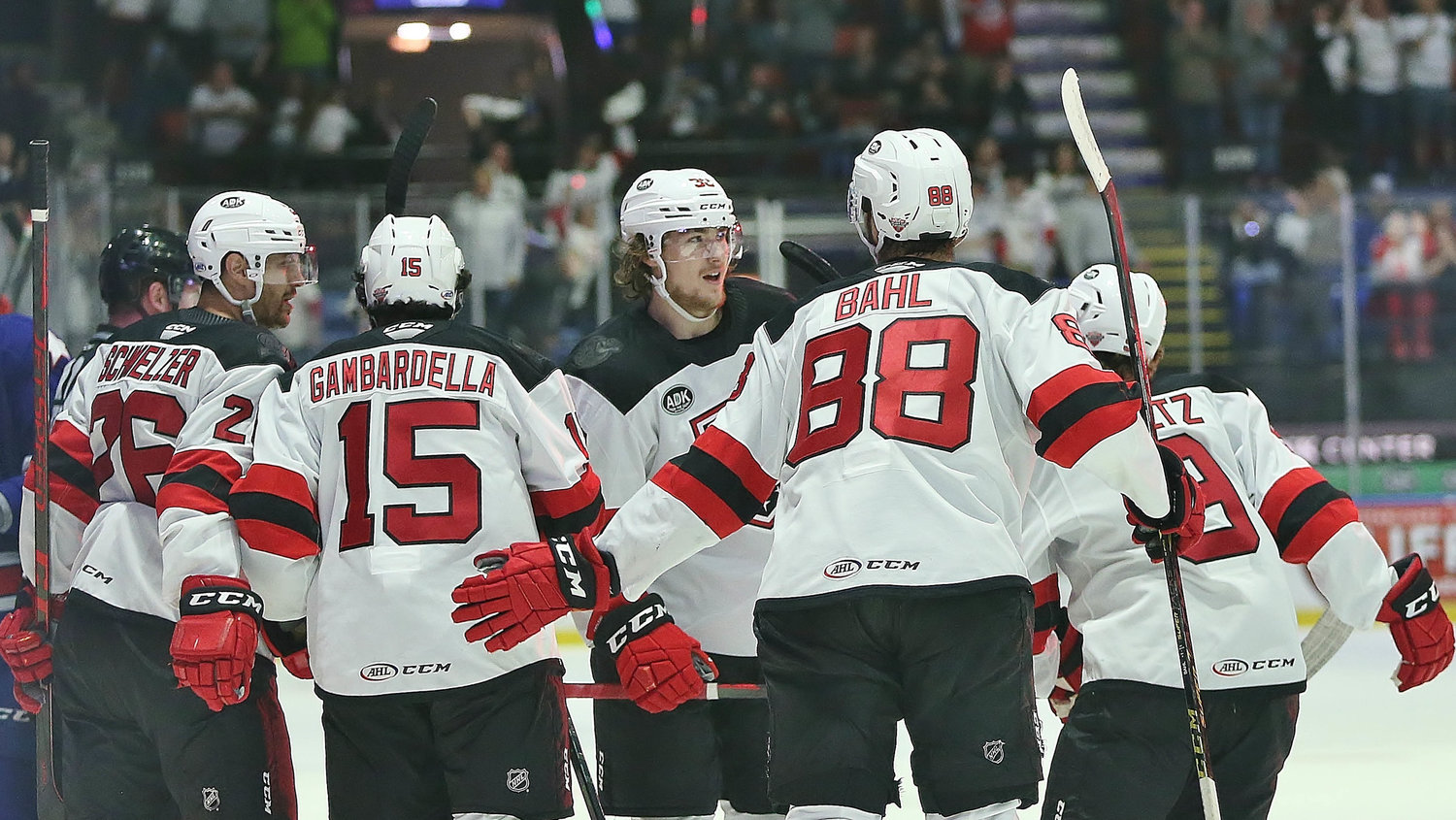 UTICA — The Utica Comets’ elevated postseason expectations have come to a sudden and screeching halt.

The rival Rochester Americans – on a somewhat surprising run as the fifth-seed after sneaking into the postseason with Utica’s help – played the spoiler again.

Rochester rallied with three third-period goals – including one on the power-play early and an empty-net for the dagger – to hand Utica a stunning 4-2 setback Thursday in a deciding Game 5 to cap a physical North Division semifinal series.

Rochester, playing in its first winner-take-all game since 2014, claims the series 3-2 and advances to play Laval in the best-of-five North Division final.

The loss came before another announced sold-out crowd, which was boisterous throughout until Rochester took the steam out of the building in the third period. A few players lingered on the ice as Rochester celebrated the win. And, the fans showed their appreciation for the Comets after the final horn.

“It is brutal,” Comets veteran forward and alternate captain Brian Flynn said of Thursday’s loss. “We know how good of a team that they have. … We didn’t take them lightly. I think we knew it was going to be a tight series and it was. We just don’t make a play in the third period of Game 5 and that’s it.”

The disappointing result signals an end to a wildly impressive first season for the Comets in a new affiliation with the New Jersey Devils. After putting together the best regular-season record in the Eastern Conference this season, players had expectations for a deep run in the Calder Cup playoffs. Rochester was also the team to end Utica’s AHL record 13-0 streak to start the season.

It is the third consecutive season a Utica AHL team has been eliminated after its first series of the playoffs after losses to Toronto in 2018 and then-Albany in 2016. There were no playoffs in 2020 or 2021.

Utica is now 2-2 overall in mutual elimination games combined with its time as Vancouver's affiliate.

Aaron Dell – who was pulled in Game 4 when Utica built a lead – finished with 19 saves.

The Comets simply weren’t as sharp as they were during a strong Game 4 effort that helped force the deciding game.

There were missed opportunities on both sides of the ice for Utica on Thursday.

“I think our management of the puck was a little sloppy as the game got into the second period,” Comets coach Kevin Dineen said. “For the most part, I thought our guys had a strong compete. I think it gets back to management of our game and when we had the puck.”

With Utica clinging to a 2-1 lead following a scoreless second period – Flynn said the team shouldn’t have needed a third goal in order to advance – Rochester seized momentum early in the third period with goals 2:24 apart. Arttu Ruotsalainen notched his eighth goal of the postseason soon after a slashing penalty on Tyce Thompson to tie the game.

Utica allowed five goals on 12 opportunities while down a man in the series, which ranked last among playoff teams. Utica, meanwhile, didn’t get a power-play Thursday.

“They’ve scored one every game,” Flynn said. “You look back and that’s probably the series.”

Then, Sean Malone put Rochester ahead for good after getting a pass in the high slot and took advantage of a loose Utica defense, scoring from the top of the right circle through a screen.

“I didn’t like the third goal by a lot of guys on our team,” Dineen said. “That was the difference-maker in the hockey game. There are tough lessons for us.”

It all seemed to be going in Utica’s favor after a solid opening first when Swedish forwards Fabian Zetterlund and Alexander Holtz – both on track to get looks with New Jersey next season – scored 49 seconds apart for a 2-1 advantage.

After scoring 25 in his first pro season in North America, Holtz’s goal was the first of the playoffs. A.J. Greer, a thorn in Rochester’s side in more ways than one this season, added an assist to give him eight points in the postseason.

That wasn’t quite enough for Utica, though.

“In the playoffs, the margin of error is very small,” Dineen said.