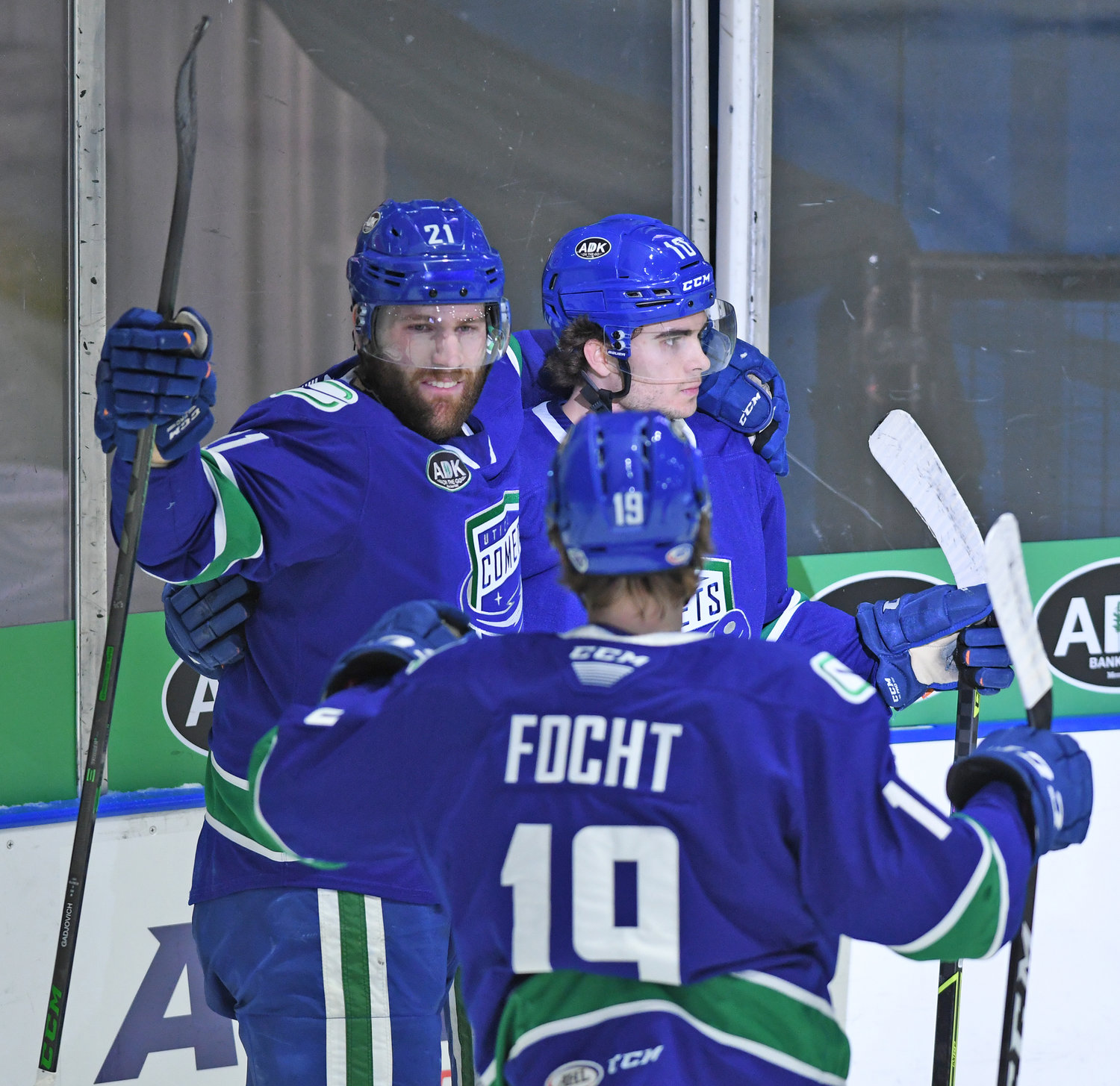 FIRST BLOOD — Jonah Gadjovich of the Utica Comets (21), celebrates with teammates Carson Focht (19) and Will Lockwood after he got the opening goal in Wednesday’s home opener against the Syracuse Crunch at the Utica Aud. Gadjovich added an empty net goal to seal a 5-2 win.
(Sentinel photo by John Clifford) 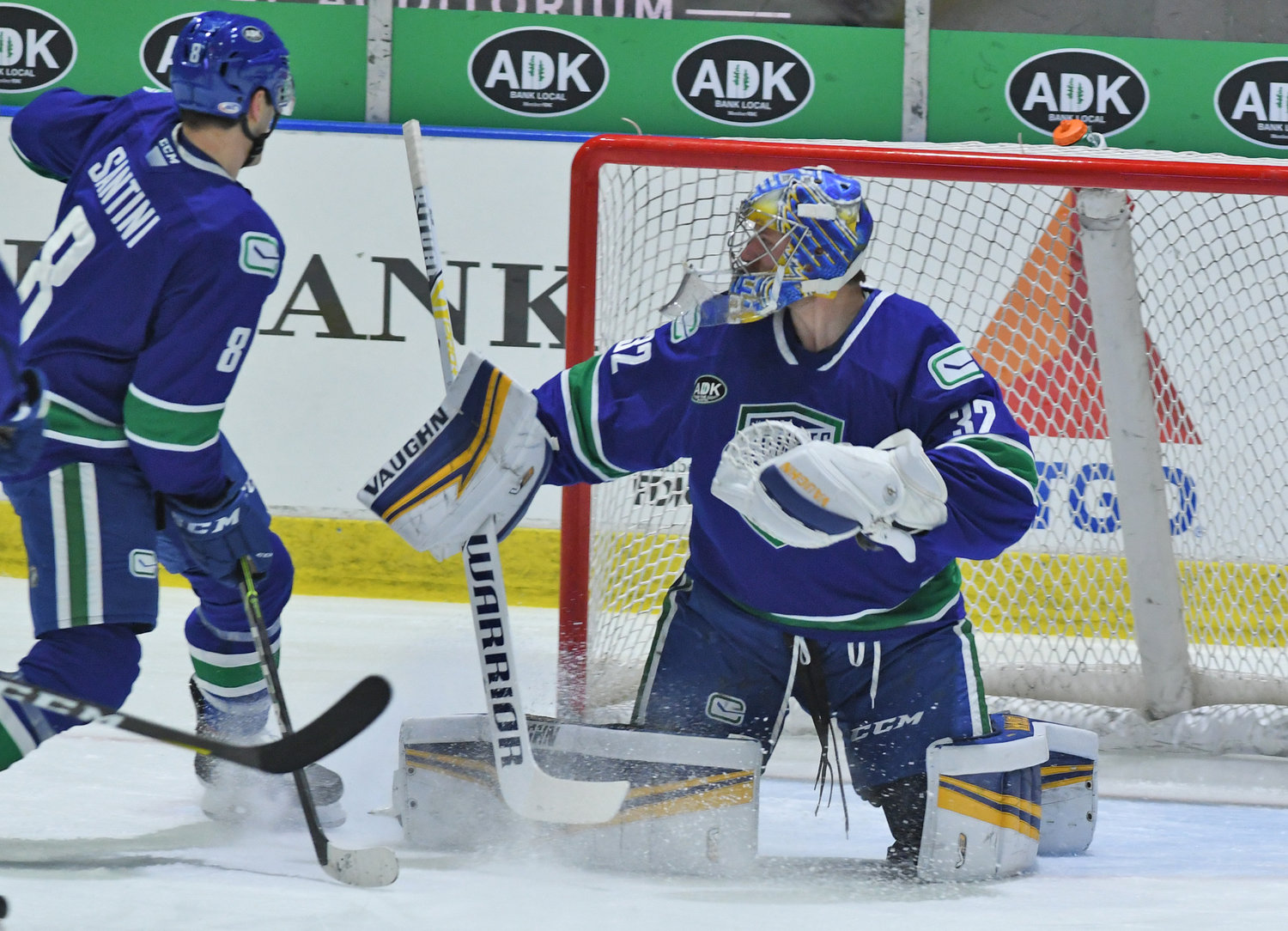 BACKSTOPPING TO A WIN — Utica Comets goalie Jon Gillies reacts to a shot as defenseman Steve Santini helps protect the net in Wednesday’s home opener against the Syracuse Crunch. Gillies stopped 17 shots to earn the win for the Comets in net.
(Sentinel photo by John Clifford) 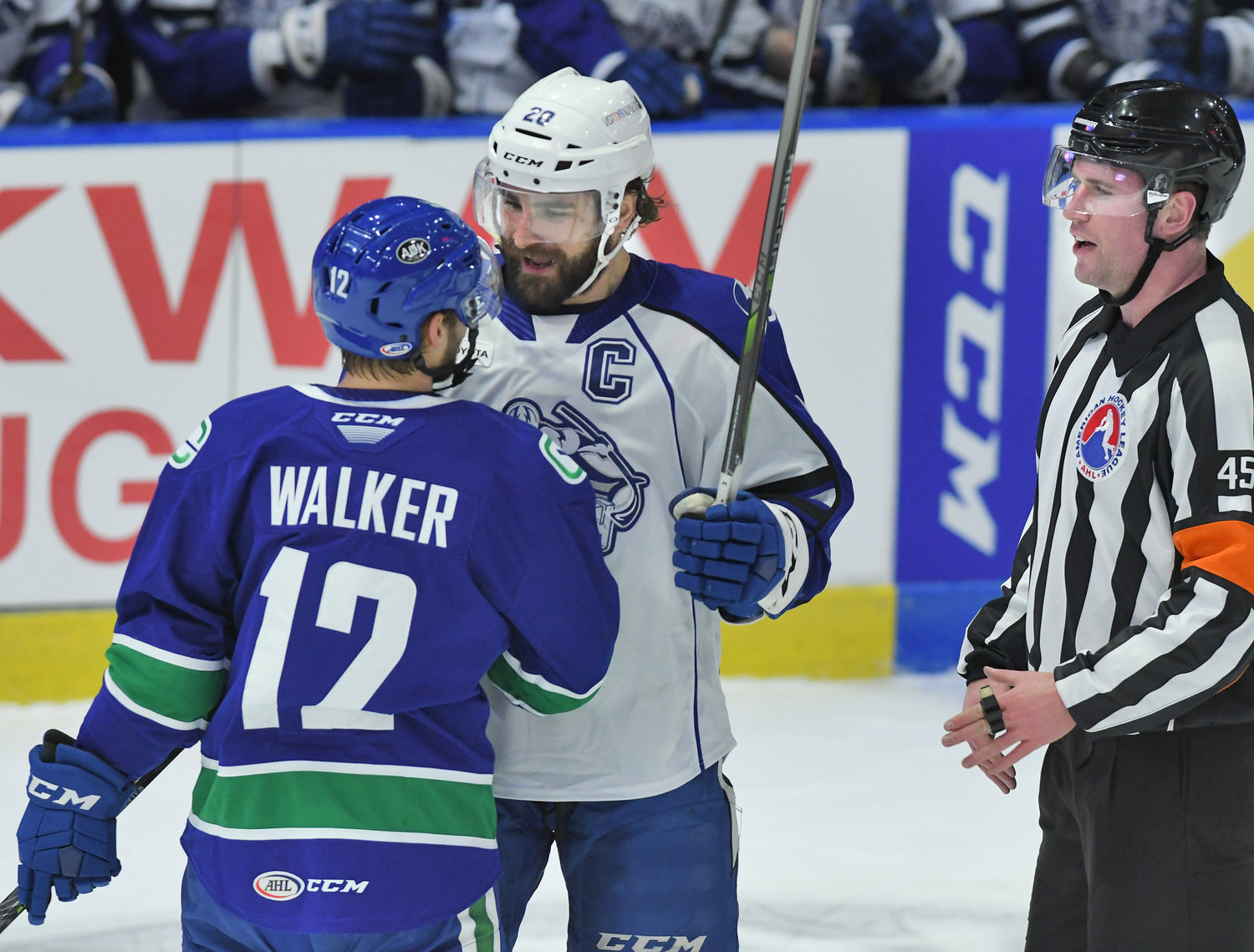 A LITTLE CHAT — Utica Comets’ Nathan Walker and Syracuse Crunch captain Ryan Lohin have a discussion during the first period of the Comets’ home opener Wednesday. Walker scored a power play goal in the second period to help Utica to a 5-2 victory.
(Sentinel photo by John Clifford) 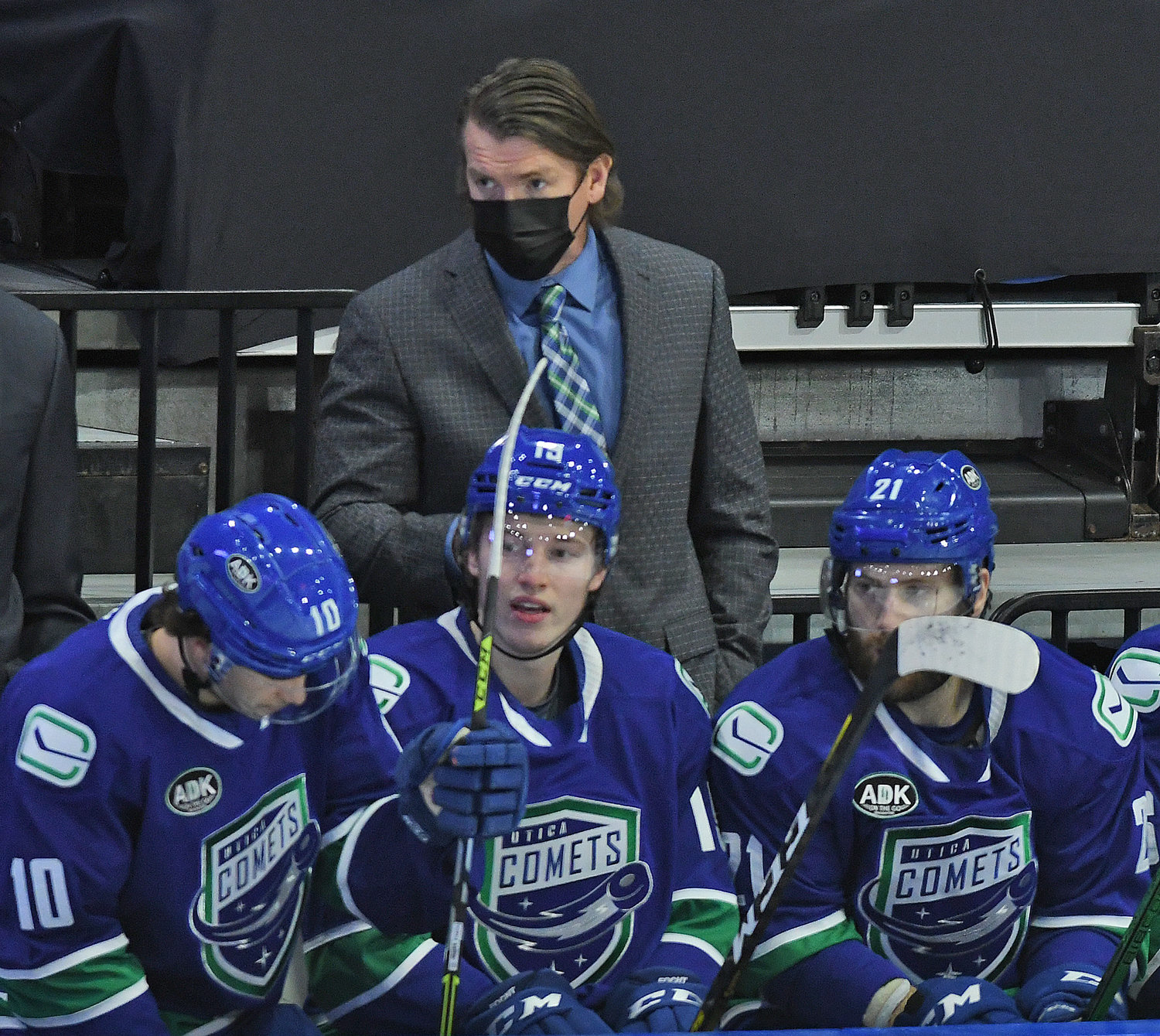 BEHIND THE BENCH — Utica Comets head coach Trent Cull looks on during the first period of Wednesday’s home opener against the Syracuse Crunch. The Comets won 5-2 to improve to 3-1 on the young season.
(Sentinel photo by John Clifford)
Previous Next
Posted Wednesday, February 17, 2021 11:10 pm
Steve Jones
Sports writer
email / twitter

UTICA — The Utica Comets won their home opener Wednesday night by beating the only team to defeat them so far in the early goings of the American Hockey League season. Jonah Gadjovich scored the opening goal and got an empty net tally to wrap up a 5-2 win over the rival Syracuse Crunch.

Both teams had their offenses buzzing in the first period but the Comets dominated time of possession. Utica had 10 shots to Syracuse’s seven. And while Utica failed to convert either of its two power plays in the opening frame, the Comets did get a goal with 5:10 left in the first at even strength.

Will Lockwood centered a pass from the right corner to Gadjovich, who was on the doorstep to one-touch the puck past Crunch goalie Sam Montembeault. Lockwood and Tyler Tucker earned assists on the goal.

“We got better as the game wore on,” said Comets head coach Trent Cull after the win. He said the team used the time off between the second and third games to work on controlling the puck and breaking out.

The Comets built on their lead with two second period goals. Utica only had four shots on goal in the middle frame, but made the most of them. First it was Steve Santini firing a point shot through traffic, including a screen in front by Kole Lind, to make it 2-0 just before the midpoint of the period. Assists went to Sam Anas and Sven Baertschi.

Utica struck again, this time on a power play, with six minutes left in the second. Anas sent a pass from low on the right side to Nathan Walker on the far side of the crease for a goal. Anas collected his sixth assist of the season and Mitch Reinke also earned an assist.

Both Santini and Walker scored their first goals of the season and Utica led 3-0 at the second break.

The Comets pressed their advantage with a third period goal by Dakota Joshua, his first of the season, 4:13 into the third period. He took a feed from Hugh McGing and got a half step on a defender on the right side then cut in on goal and slid the puck home on a low shot to make it 4-0. McGing and John Stevens each earned his first assist of the season on the goal.

Jimmy Huntington ended the shutout bid for Jon Gillies of Utica with a power play goal at 7:40 of the third. Just over halfway through the third, the Crunch trimmed the lead to two with a goal from a sharp angle by Dmitry Semykin. He fired a shot that bounced off some bodies in front and got past Gillies.

Gadjovich’s empty net goal for Utica sealed the win with 22 seconds left. Nolan Stevens and Lucas Jasek got assists on the goal.

Cull said he’s been pleased with the line of Gadjovich, Lockwood and Carson Focht. “They have some good pieces to complement each other.” Gadjovich agreed, speaking after the game. “I love playing with those guys,” he said, noting that they’ve worked on communication on and off the ice as one way to help him and the two rookies develop chemistry.

Gillies stopped 17 of 19 shots for the win. Montembeault had 15 saves in the loss.

Gillies, who was back in action after missing time to concussion symptoms, said early shots helped him get comfortable right away. He also complimented the defenders in front of him. “I had a lot of help tonight.” Despite it being a young group of defensemen, he said, “I think they’re doing a hell of a job. You put in the work and good things will come. Inexperienced maybe but you won’t find a more coachable group of seven defensemen.”

The Aud is usually a packed house for AHL games but Wednesday there were no fans allowed in.

“It’s definitely noticeable,” Gadjovich said. The loud crowd is part of what makes Utica a tough place to play, he said, but the players are being professional and motivating themselves even without the fans in the seats. “You miss it so much,” Cull said of the fans. While the team relies on the crowd for energy, he said, but the players did their best without that advantage.

Each team went one-for-four on the power play.

With the win, Utica improved to 3-1 on the season.

The Comets turn around and travel to Rochester Thursday night for their second game on the road against the Americans already. Puck drop is 7:05 p.m. The Comets got the win 3-2 on opening night against Rochester on Feb. 5.