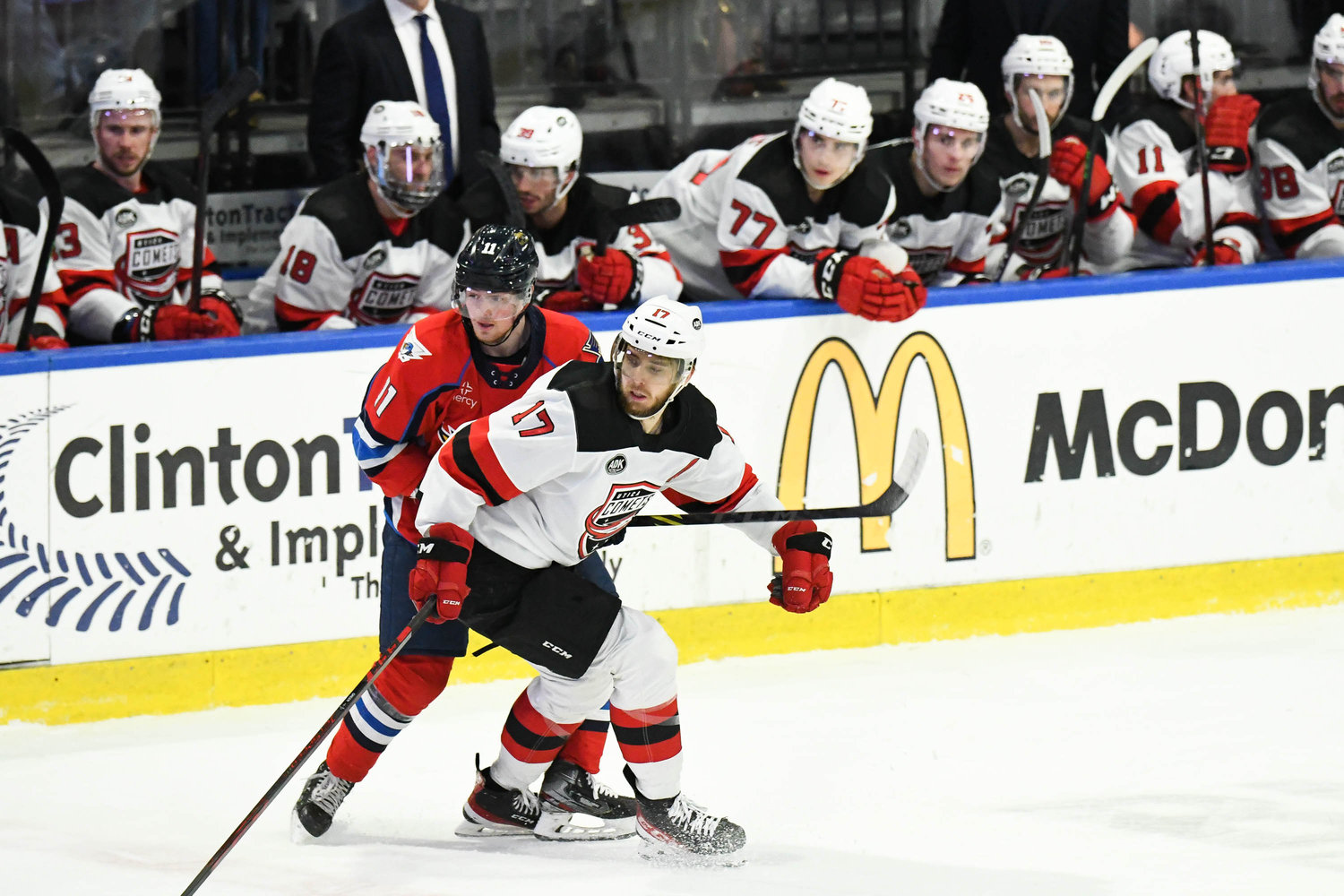 CLOSING OUT — The Utica Comets close the American Hockey League regular-season Saturday. The team will get some time off between the regular-season and their playoff series.
(Sentinel photo by Alex Cooper)
Posted Saturday, April 30, 2022 7:30 am
Ben Birnell
Sports writer
email / twitter

UTICA — The Utica Comets wrap up the 72-game regular-season this weekend.

The team, which has already locked up the top spot in the North Division and the best record in the Eastern Conference, is aiming to enter the American Hockey League’s postseason on a high note.

“We just want to get some good momentum going into the playoffs,” said Comets forward Chase De Leo, who is one of four players to surpass 50 points this season. “It might not look important to us in the standings, but they are (among) the most important games of the year. We have to set ourselves up going into postseason with good habits and positive energy.”

Entering Friday’s game at Rochester and Saturday’s contest at Providence – both rescheduled from earlier in the season due to challenges with COVID-19 – the Comets got an opportunity to get in some rest with a week in between games.

Following the weekend games, the Comets will have some more time to rest with a first-round bye. The team will get time to prepare as they await a winner of the first-round North Division series. As of Friday, there was no official announcement on when the Comets’ North Division best-of-five semifinals series will start, though the second week of May is likely.

“For us, a nice issue to have is how to spend our time that we’ve earned and end up in first (place) and not go through a grueling three-game set to advance. In saying that, if you’re one of those teams, you feel like you’re battle ready and you hit on a little higher note,” said Comets coach Kevin Dineen, who previously coached Portland and San Diego in the AHL postseason. “We’ll prepare as if games are around the corner and it will be a good balance between work and making sure we’re healthy and ready to hit the ice.”

The rest is beneficial, De Leo said. Especially at the beginning of a grueling period like the postseason when games take on a different form and even small mistakes can be costly.

“I think we’re lucky with the leadership and the staff we have in place. They’ve set up a good plan for us going into playoffs. It is a bit of a weird schedule,” said De Leo, who is set to play in an AHL postseason for the fourth consecutive season there has been a format.

“A lot of things are out of our control and the one thing we can control is being ready to go and being prepared to go when the puck drops.”

The team wants momentum after some tough results earlier in April.

“That’s the kind of thing with these (final regular-season) games where the level of importance doesn’t seem high, but you also understand that your play also has a large effect on the outcome,” said Dineen, who ranks 10th on the AHL’s career wins list. “I don’t think we’re a team that can turn things on and off.”

The Comets have recently been without several regulars – six players were closing out the NHL regular-season with the parent New Jersey Devils on Friday – giving other players an opportunity.

“These guys can count,” Dineen said. “We’ve got some guys that are in the NHL and a few others that are not (practicing). It is a chance for some of the players to make a final impression that they can do everything to stay in the lineup. It is important that players that have been go-to players for us are sharp as well.”

The AHL announced Friday that Rochester Americans forward Jack Quinn is winner of the Dudley (Red) Garrett Memorial Award as the league’s outstanding rookie for the 2021-22 season.

The award was voted on by coaches, players and members of the media in the league’s 31 cities.

Quinn emerged as one of the top prospects in the AHL. In 44 games, Quinn registered 25 goals and 34 assists, which ranks among the top 10 in the AHL. He averaged 1.34 points per game while not going back-to-back without a point all season.