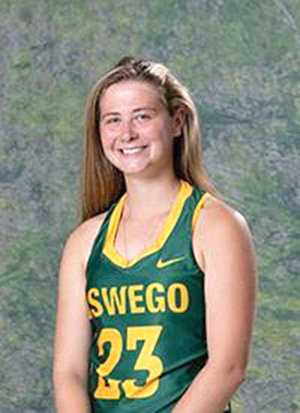 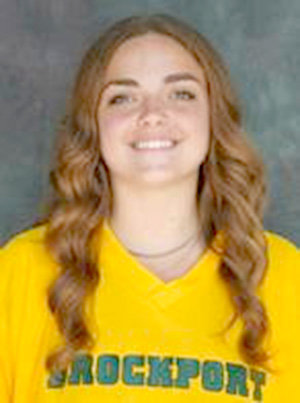 Simzer’s four goals and eight points tied two Oswego single-game records and led the Lakers to a 5-1 non-conference victory over Keystone College. Simzer, who earlier this season had two goals and two assists in a win over Medaille and two goals in a win over Keuka, entered this week as the SUNYAC leader in goals (9), points (20), and shots on goal (28).

Oswego classmate Kaitlyn Mastracco (Rome/RFA) is also among the top scorers in the conference with seven goals and one assist.

Elsewhere, Keuka College freshman Tori Nelson (Vernon Center/VVS) scored her first two collegiate goals in a 4-3 field hockey loss to Lycoming and then had two goals and an assist in an 8-1 win over Russell Sage. Freshman Eliza Tuttle (Whitesboro) assisted on one of those eight goals.

SUNY New Paltz forward Natasia Plunkett (Holland Patent) scored again in a 3-1 field hockey win over Skidmore and later scored her fifth goal of the season in a 4-3 overtime loss to Rochester.

Houghton University’s Jace Hunzinger (Rome/RFA) had a goal and an assist in an 8-0 win over Wells and she then assisted on both goals in a 2-1 field hockey win over Utica. Freshman Makayla Arnold (Marcy/Whitesboro) scored her first collegiate goal for the Pioneers.

Junior Karlie Cubino (Marcy/Whitesboro) on Monday was named SUNY Cortland’s Female Athlete of the Week after winning both of her singles matches last week. Cubino was a 6-1, 6-3 winner at fifth singles in Cortland’s 7-2 win over SUNY Plattsburgh. The Red Dragons lost to SUNY New Paltz 8-1, but Cubino won her singles match 6-1, 6-3. She also went 1-1 at No. 2 doubles.