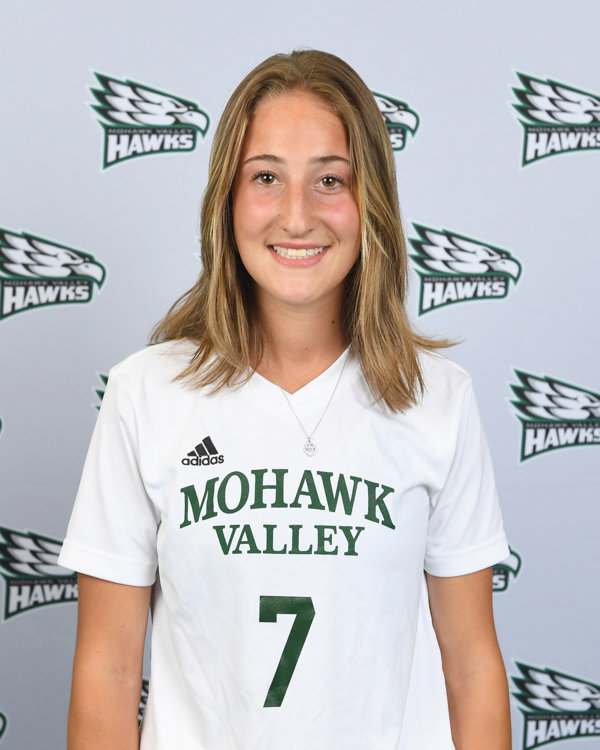 Piersma, who had three goals and an assist in MVCC’s 11-1 romp over Finger Lakes Community College in the North A District Championship game, was joined on the All-Region 3 First Team by a pair of teammates - sophomore forward Jazmyn Gillette (Mohawk/Central Valley Academy) and freshman defender Ryann Deperno (Deerfield/Whitesboro).

Piersma, who has scored at least one goal in 12 of 14 games for the 14-0 Hawks and has eight game-winners, leads the nation with her 26 goals and 69 points. Gillette is second in the country with 22 goals and 61 points, and she and Piersma are tied for second in NJCAA Division III with 17 assists each.

Herkimer County Community College had two freshmen named to the All-Region 3 Second Team — striker Liz Cingranelli (Stittville/Holland Patent) and midfielder Lydia Reimer (Newport/West Canada Valley) — and freshman defender Miranda Brown (Rome/RFA) was named to the Third Team. Cingranelli had eight goals and five assists, Reimer had 10 goals and 12 assists, and Brown had one goal and one assist for the 7-4-1 Generals.

Restivo sets another record at Johnson and Wales

Restivo’s second hat trick in three games led the Wildcats to a 5-2 win in the first round of the Great Northeast Athletic Conference (GNAC) tournament, and her goal with less than five minutes left in the first half led JWU to a 1-0 win over St. Joseph’s of Maine in Tuesday night’s semifinals. It was the 23rd goal of the season for Restivo, and it was the 17th straight win for the Wildcats (18-2-1), who play Lasell in Saturday’s final.

After helping NCAA Division I Stony Brook University reach the Colonial Athletic Association’s women’s soccer playoffs for the first time, junior Reilly Rich (Ilion/Central Valley Academy) scored her team-leading eighth goal of the season on a penalty kick in the 71st minute but the Seawolves were knocked out of the tournament by a 2-1 loss to Northeastern University. Rich, a junior college All-American at Mohawk Valley Community College, led Stony Brook (7-8-4) in scoring with 21 points on eight goals and five assists.

Utica University’s Jacinta Kaminski (Holland Patent) scored her third goal of the season in the 70th minute of a 1-0 regular-season win over Hartwick College. The Pioneers then edged Hartwick 2-1 in Tuesday’s first round of the Empire 8 Conference tournament. A goal by Hartwick’s Nicole Casab (Utica/Thomas R. Proctor) tied the game in the final minute of the first half.

Keuka College’s Kayla Suppa (Oneida) had an assist to help the Wolves end their women’s soccer season with a 3-0 win over Medaille College. Freshman Parker Lahey (Whitesboro) led Keuka with seven points on three goals and one assist.