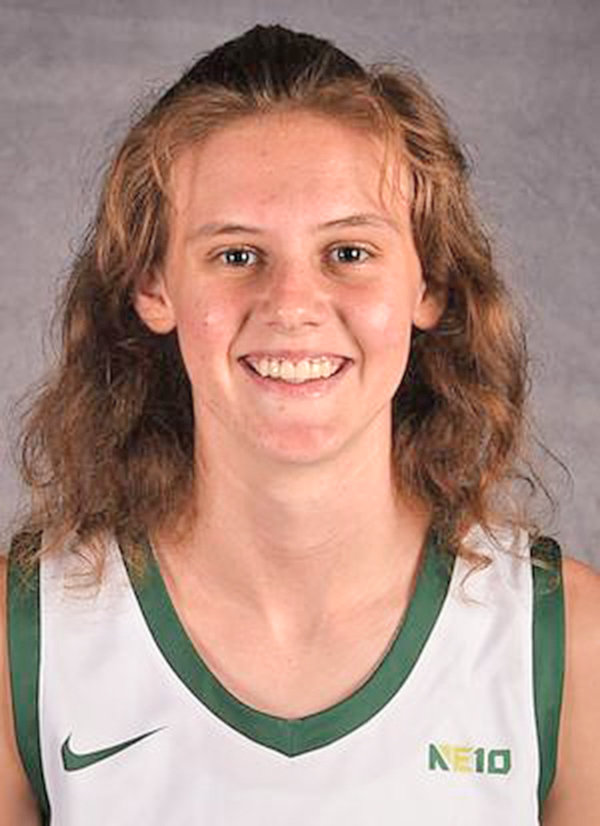 Le Moyne College’s Sydney Lusher (Oneida) was named the Northeast-10 Conference women’s basketball Rookie of the Week after the redshirt freshman helped the Division II Dolphins to a pair of wins in New Hampshire last week.

Lusher scored a team-high 15 points and had five assists and four steals in Le Moyne’s 77-57 victory over Franklin Pierce University. The 5-foot-11 guard then had 10 points, seven rebounds and five assists in a 64-52 win over Saint Anselm.

Plunkett, who also made the second team as a freshman, led New Paltz in scoring with her 15 goals and 33 points, and she was named the State University of New York Athletic Conference (SUNYAC) Offensive Player of the Year.

Corrigan, the SUNYAC Tournament’s Most Valuable Player, had eight goals and nine assists and she tied the Cortland record with four assists in one game.

Three other local field hockey players made the All-Region Second Team, including Houghton University sophomore Jace Hunzinger (Rome/RFA), who tied for the NCAA Division III lead with 0.90 assists per game. She led the Highlanders in scoring with 32 points on seven goals and a school-record 18 assists.

Oswego State senior Kacie Simzer (Clinton) and Utica University sophomore Mackenzie Mix (Camden) also made the second team. Simzer, the Empire 8 Conference scoring leader with 17 goals and 36 points, twice tied the Oswego record for goals and points in a single game and Mix had 11 goals and four assists for the Pioneers.

St. Lawrence University basketball star Trent Adamson (Ilion/Thomas R. Proctor) was named to the Liberty League’s Honor Roll for the second straight week after the senior scored 16 of his season-high 24 points in the second half of a 74-69 win over Union College. He also grabbed 10 rebounds for his first double-double of the season.

Utica University’s Thomas Morreale (Whitesboro) led the Pioneers with 21 points and 10 rebounds in a 94-60 romp over Hartwick College.

Herkimer College sophomore guard Dante Griffin (Utica/Notre Dame) averaged 13.5 points and made 30 of 33 free throws during the Generals’ four-game winning streak. He went 10 for 10 from the foul line and had 18 points, six assists and four steals in a 76-62 win over Mohawk Valley Community College and he had a team-high 19 points, 12 rebounds, eight assists and three steals in a 70-62 win over Clinton Community College.

Ernst then scored 14 points and Spina had 10 points and six assists in a loss to Northern Vermont-Johnson.