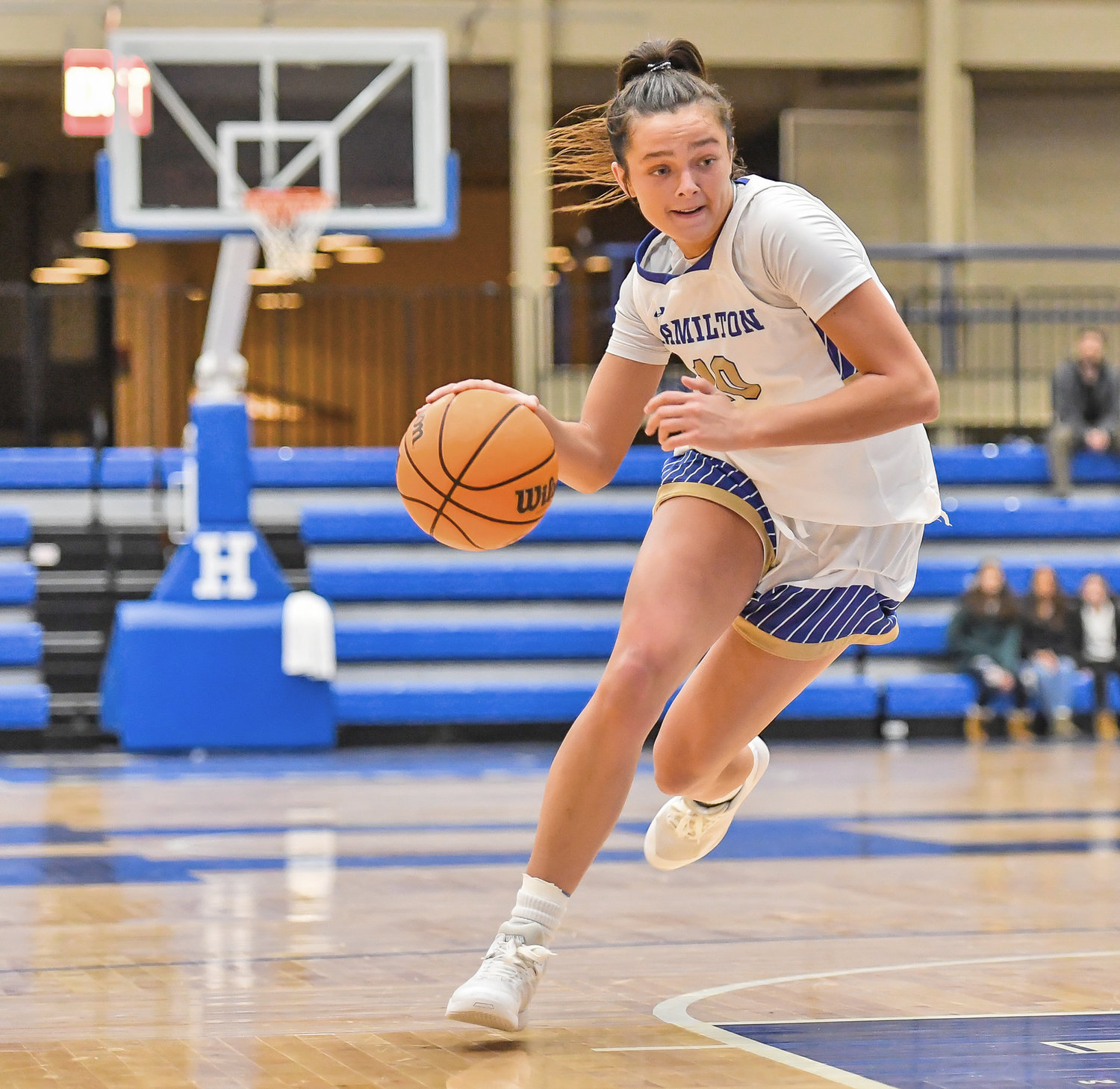 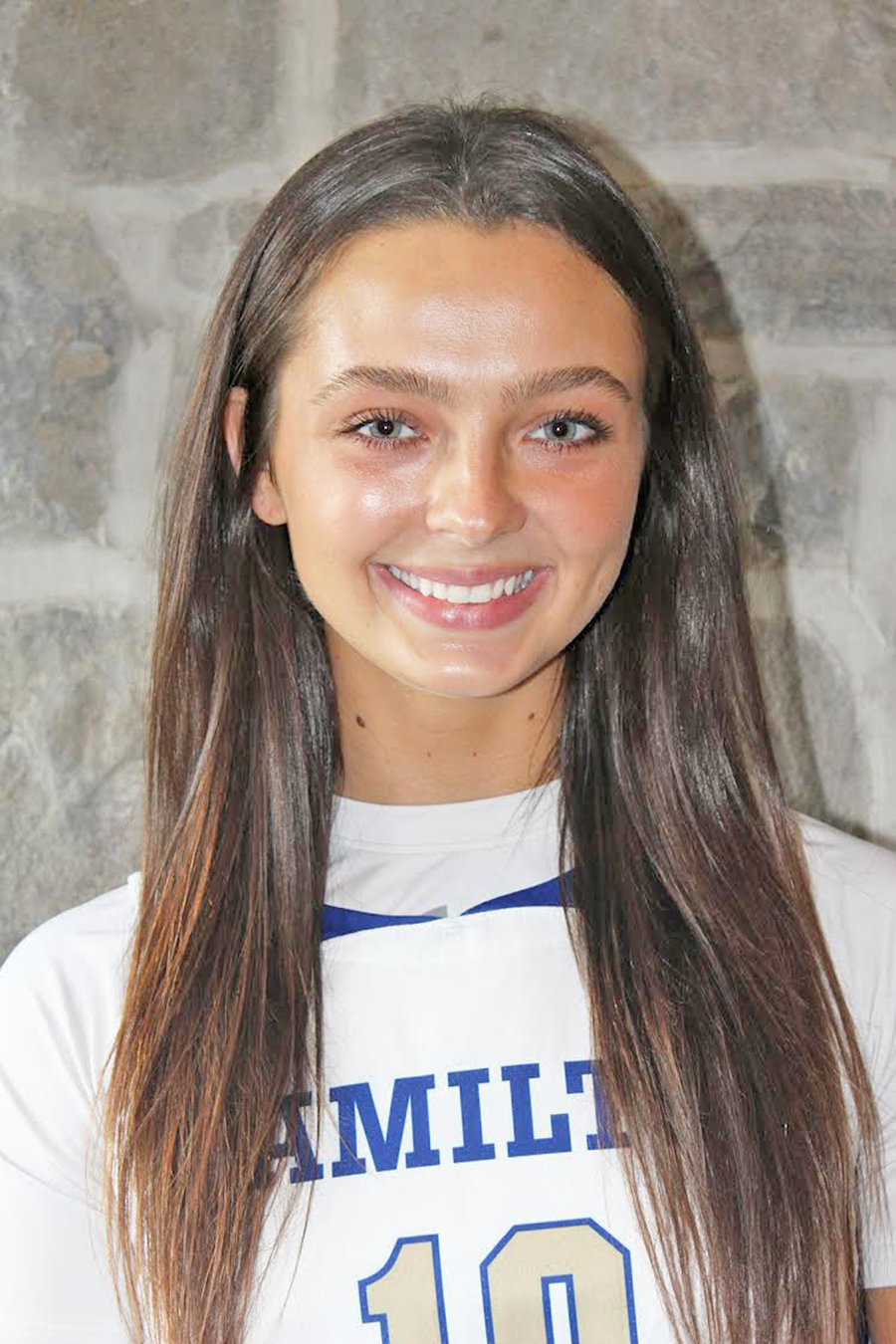 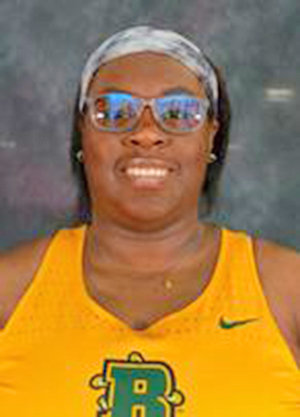 Hamilton College’s Emma Sehring (Sauquoit/Notre Dame) helped her women’s basketball team to a pair of New England Small College Athletic Conference (NESCAC) victories over Bates College and nationally-ranked Tufts University last weekend, and Monday she was named the NESCAC Player of the Week for the second time this season.

The week started with Sehring scoring 19 points and grabbing 13 rebounds in a 68-52 loss to a Smith College team ranked No. 8 in the country. On Friday, her career-high 20 points and 15 rebounds led the Continentals to an 80-71 overtime win over Bates. Sehring’s basket with four seconds left in regulation sent the game into overtime, and her free throw with two minutes remaining in OT gave Hamilton the lead for good.

The next day, Sehring had 11 points and nine rebounds against a Tufts team ranked No. 25 in the Women’s Basketball Coaches Association’s Division III poll and Hamilton’s 59-43 win ended a 16-game losing streak to the Jumbos.

Sehring, named the NESCAC Player of the Week on Nov. 14 after she was named Most Valuable Player of the Vassar College Tournament, and the Continentals were back in action Monday against another nationally-ranked team. She recorded her seventh double-double of the season, finishing with 16 points and 10 rebounds, but No. 11/12 Babson College held on for a 71-64 win.

The Continentals are 9-7 overall and Sehring is averaging 12.4 points and a team-high 9.4 rebounds. In her first season as a starter, the 6-foot-1 forward averaged 7.5 points and 6.7 rebounds last year.

Paul Smith’s College’s Hayleigh Gates (West Winfield/Mount Markham) scored a season-high 21 points and had 16 rebounds and five blocks to lead the Bobcats to a 78-48 win over Five Towns College on Tuesday night.

Brockport University’s Sarah Crockett (Rome/RFA) was named the State University of New York Athletic Conference (SUNYAC) Women’s Track & Field Athlete of the Week for the second time this season after she swept the throwing events at the Utica University Winter Open last weekend.

Utica sprinter Mackenzie Mix (Camden) was a member of the winning 4x200 relay and she placed second in the 200-meter dash with a time of 26.40 seconds.

Sophomore Madison Kozyra (Marcy/Whitesboro) was named Le Moyne College’s Athlete of the Week on Jan. 9 after she placed eighth with a school-record heave of 45 feet, 7 ¼ inches in the weight throw at the West Point Open. She also was 11th in the shot put at 29-8 ¼.

At The College of New Jersey Invitational, Ithaca College’s Nathaniel Oczkowski (New Hartford) won the 60-meter hurdles in 8.45 seconds and was third with a 500-meter time of 1:07.21.

Longway, also the Le Moyne College Athlete of the Week, had two relay wins and also won the 50-yard freestyle with a time of 25.55 seconds as the Dolphins beat Alfred University 169-50.

St. Lawrence University’s Trent Adamson (Ilion/Thomas R. Proctor) scored eight points on 4-of-5 shooting and also had eight rebounds and five blocks as the Saints improved to 8-5 with a 50-37 win over 25th-ranked RPI.

The next day, Cook’s pin in 2:38 helped South Dakota State rout Campbell University 39-3, and he was a 6-2 winner over his 32nd-ranked opponent in a 42-3 victory over Ohio University.