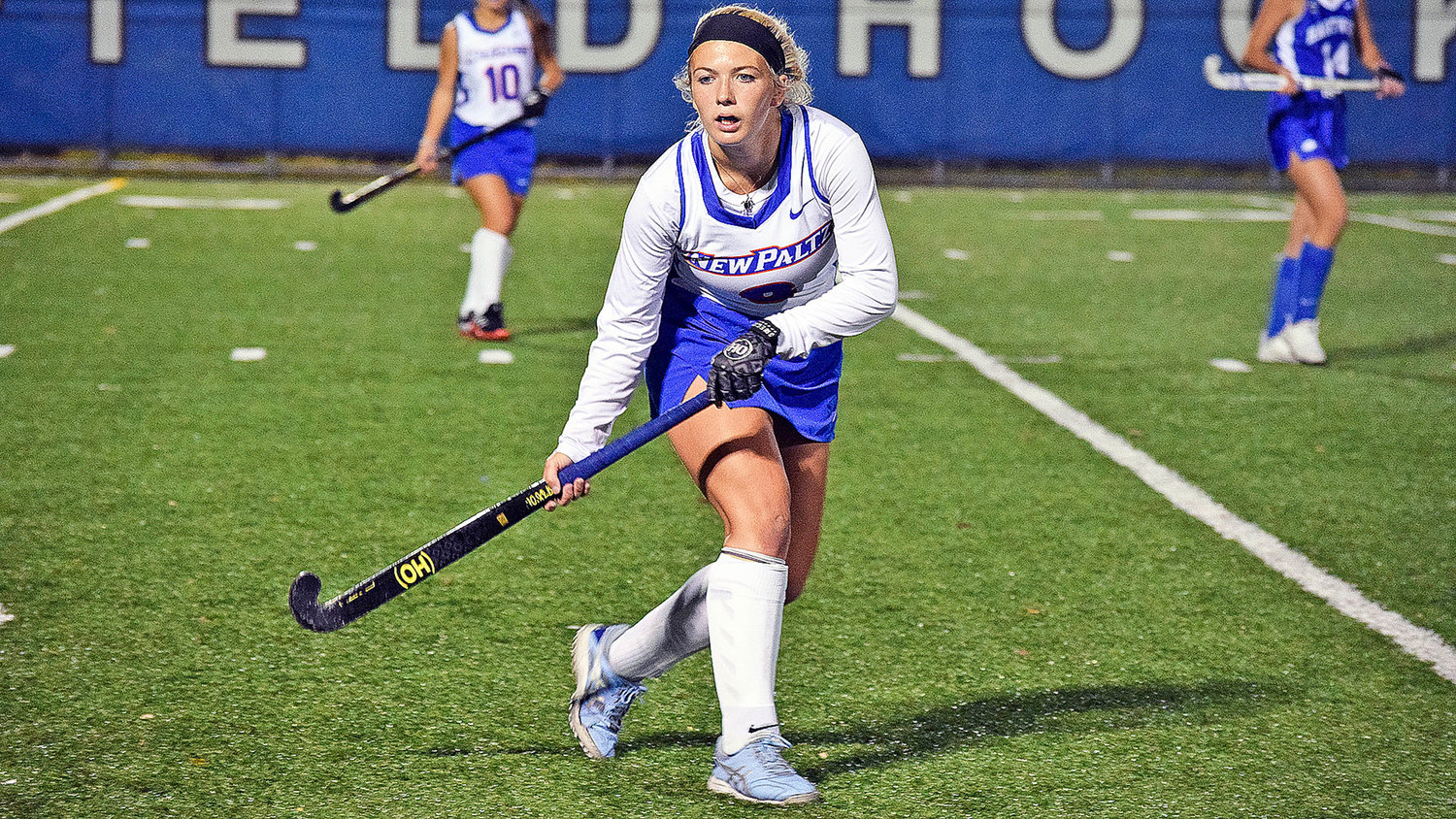 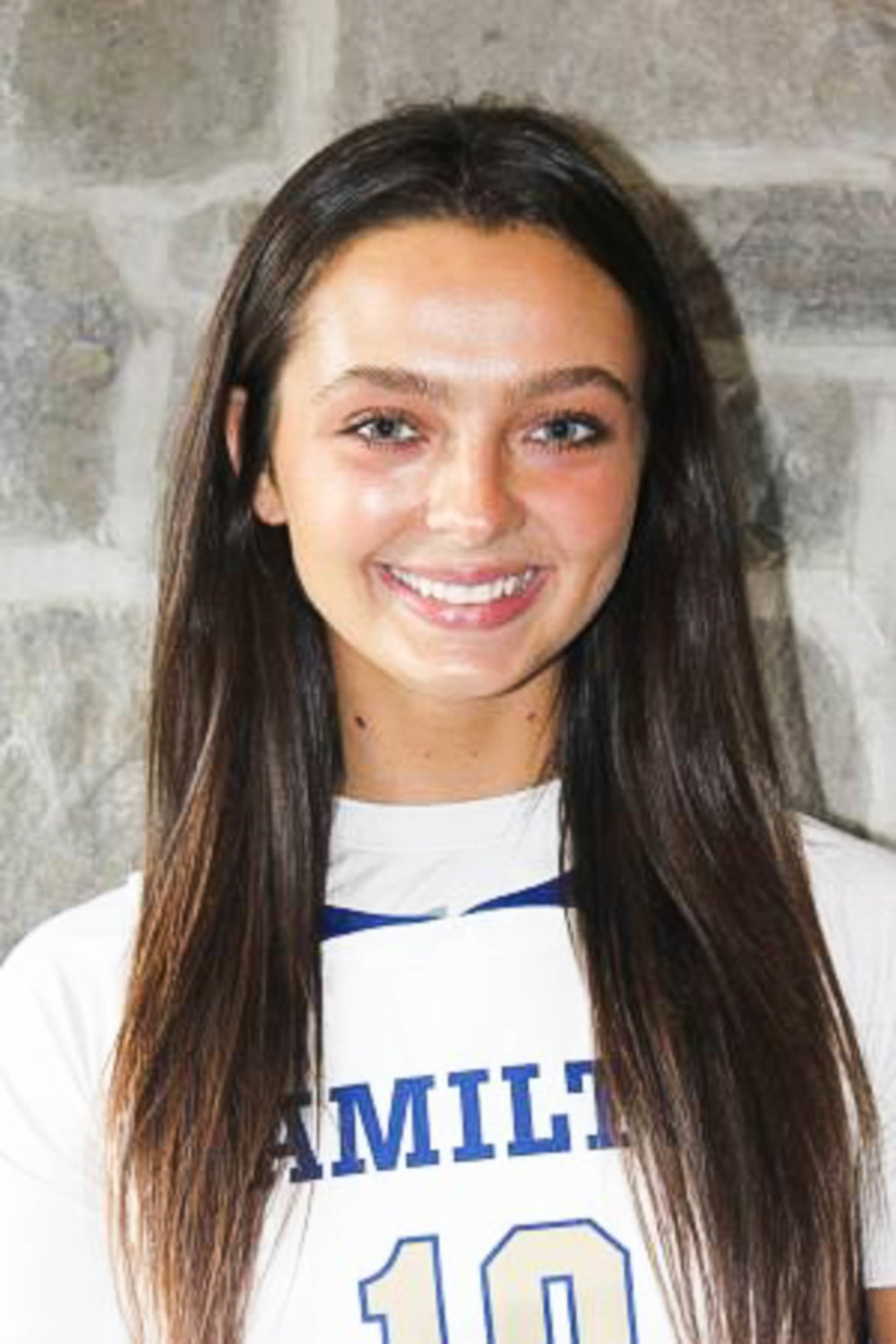 Her SUNY New Paltz field hockey coaches and teammates called Natasia Plunkett (Holland Patent) “our beast,” so it came as no surprise when the senior forward ended another monster season as the State University of New York Athletic Conference (SUNYAC) Offensive Player of the Year.

Plunkett was the Hawks’ leading scorer with 33 points on 15 goals — the fourth-most in program history — and three assists, and she was named to the All-SUNYAC First Team for the third time. Only four other players in the history of the program have scored more points in a single season.

“She’s a force on the field. She’s our beast. That’s what we called her,” New Paltz head coach Shanna Szablinski said in a story on the school’s website. “She’s scary and she is that player that will do whatever it takes to score. She’s just extremely explosive and dynamic, and as a forward that’s a deadly combination.

“Learning the skills to execute and making those decisions in the moment was something she developed over time. You can’t teach her grittiness and aggressiveness,” Szablinski said, “but you can definitely develop her as a player and that’s a ticking time bomb in my eyes for just a phenomenal attacker.”

Already a two-time All-Region selection, Plunkett tied a program record with four goals in one game and she also had a pair of three-goal games. She led the league with eight goals in SUNYAC play, averaging 1.33 per game.

Plunkett ended her New Paltz career with 33 goals, six assists and 72 points, ranking fifth all-time in goals and eighth in points in program history despite playing only three seasons.

“She understood how to read the defense and exploit their weaknesses. There was a clip of just how quick she can turn the ball into someone’s feet and that is an art as a player,” Szablinski said. “I think that’s something that takes time and experience but being able to recognize when to shoot versus when to find feet inside the circle is an art and she really executed that well. That’s what made her the Attacking Player of the Year in my eyes. Just great decision-making, taking risks and the ability to understand the weakness of the defense and what you can achieve at that moment. That’s what separated her. …

“She is also very savvy defensively, which you never really see forwards have both. I think that really inspired and taught our younger players the importance of second effort and re-defending and that’s something that she did exceptionally well.”

Simzer twice tied the Oswego record with a pair of four-goal games, and she led the conference with her 17 goals and 36 points

Corrigan, a first-team selection for the second time, tied a Cortland record with four assists in one game. Named the Most Valuable Player of the SUNYAC Championships, Corrigan ended the season with 25 points on eight goals and nine assists.

SUNY Oswego senior defender Kaitlyn Mastracco (Rome/RFA) made the All-SUNYAC Second Team. She was sixth in the conference with 10 goals and finished 10th in total points (22).

Sehring scored a career-high 16 points and matched another career high with 11 rebounds in Hamilton’s 62-57 win over Swarthmore College. She then earned tournament MVP honors with 16 points and nine rebounds as the Continentals beat Vassar 71-60 in the finals.

In SUNYAC women’s basketball, SUNY Geneseo junior Kiley Snow (Whitesboro) shot 6 for 7 from the field, including 3 for 3 from beyond the arc, and scored a career-high 19 points in a 69-31 win over Keuka College. She scored 12 first-quarter points, including eight straight during the Knights’ 17-2 start. On Tuesday, Snow’s 5-for-10 three-point shooting and team-high 17 points weren’t enough in a 57-50 loss to Ithaca College.

Le Moyne College’s Sydney Lusher (Oneida) shot 4 for 6 from three-point range and scored 20 points and Haedyn Roberts (Holland Patent) had 19 points and 14 rebounds in an 81-67 season-opening win over Lake Erie College. Roberts then had 17 points and seven rebounds and Lusher added 12 points and seven assists in a 60-47 win over Post University.

Williams scored 14 of his career-high 20 points and shot 4 for 6 from three-point range in Cortland’s 87-69 first-round win over Union College.

Colgate University senior Sydney Bard (New Hartford) has been named ECAC Women’s Ice Hockey Defender of the Week for the second time this season after helping the nationally-ranked No. 4 Raiders improve to 13-1 with a pair of road wins.

Bard’s third assist of the night in a 5-4 victory over Harvard University came on a game-winning power-play goal scored with less than five seconds remaining.

Bard is third on the team in scoring with 14 points on two goals and 12 assists.

An unbeaten Mohawk Valley Community College women’s soccer team reached the finals of the NJCAA Division III Championships before its season ended with a 2-1 loss to Dallas College Brookhaven.

MVCC’s Jazmyn Gillette (Mohawk/Central Valley Academy) scored her 26th goal of the season on an assist from Olivia Bochniak (Barneveld/Holland Patent) and goalie Hannah Pcola (Cassville/Mount Markham) made seven saves for the Hawks (15-1-1).

After playing Delta College to a 1-1, double-overtime draw in the semifinals, MVCC advanced by winning a penalty-kick shootout. Alyssa Shepherd (Sauquoit/Sauquoit Valley) scored her 13th goal off an assist by Amber Piersma (Cassville/Mount Markham) to tie the game in the 56th minute. Shepherd, Piersma, Gillette and Kendall Decker (Remsen) scored in the shootout and Pcola finished with 13 saves.