He is 13 games into his final collegiate baseball season, and SUNY Oswego’s Ryan Enos is off to the best start of his school record-breaking career. That’s a fact. Just don’t ask the senior … 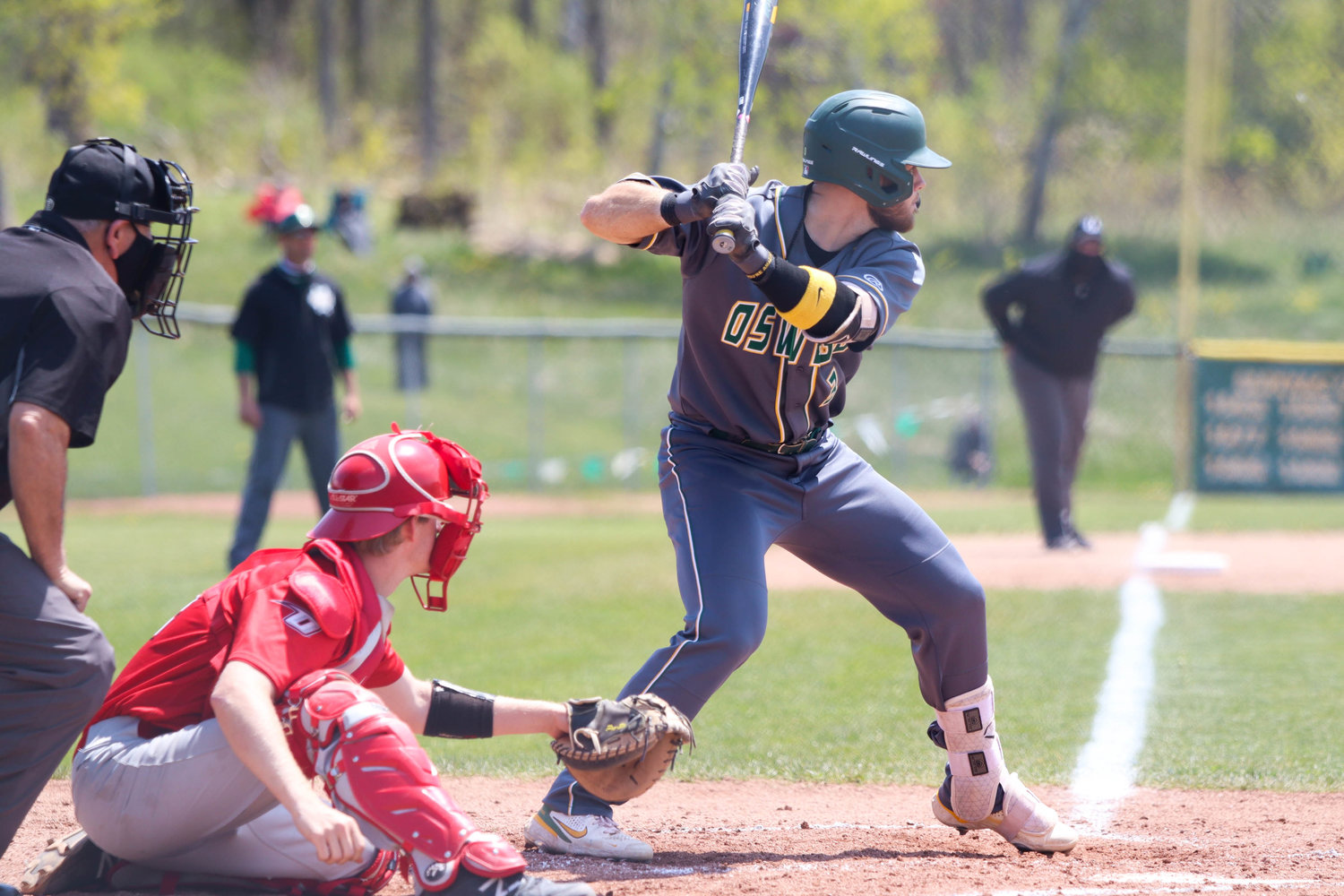 ON FIRE — SUNY Oswego fifth year senior Ryan Enos has gotten off to a scorching hot season this year. The Oriskany High School product entered the week ranked in the top 10 in NCAA Division III baseball in three categories. He was fifth in batting average (.558) and slugging percentage (1.019) and eighth in on-base percentage (.636).
(Photo courtesy Alexis Fragapane) 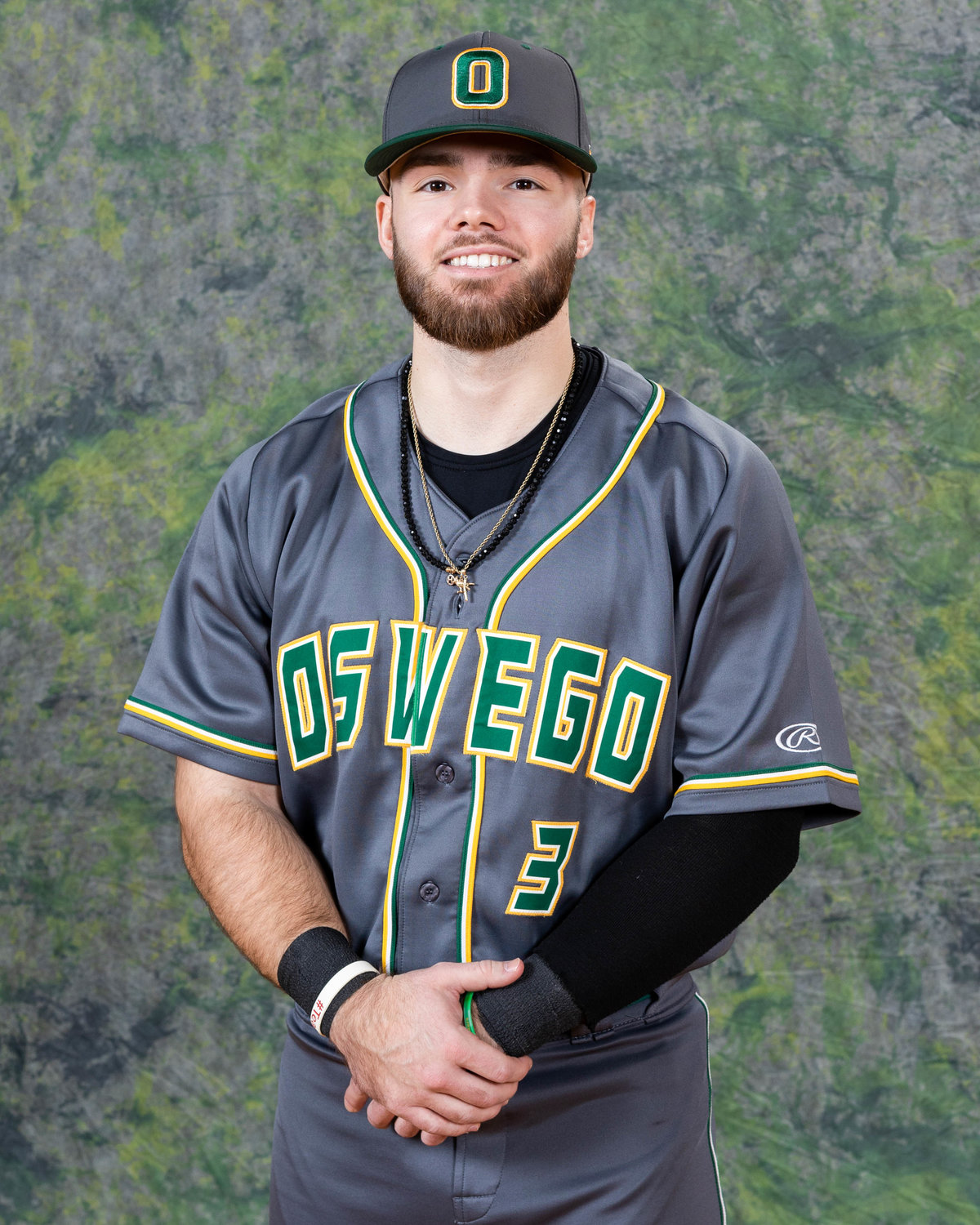 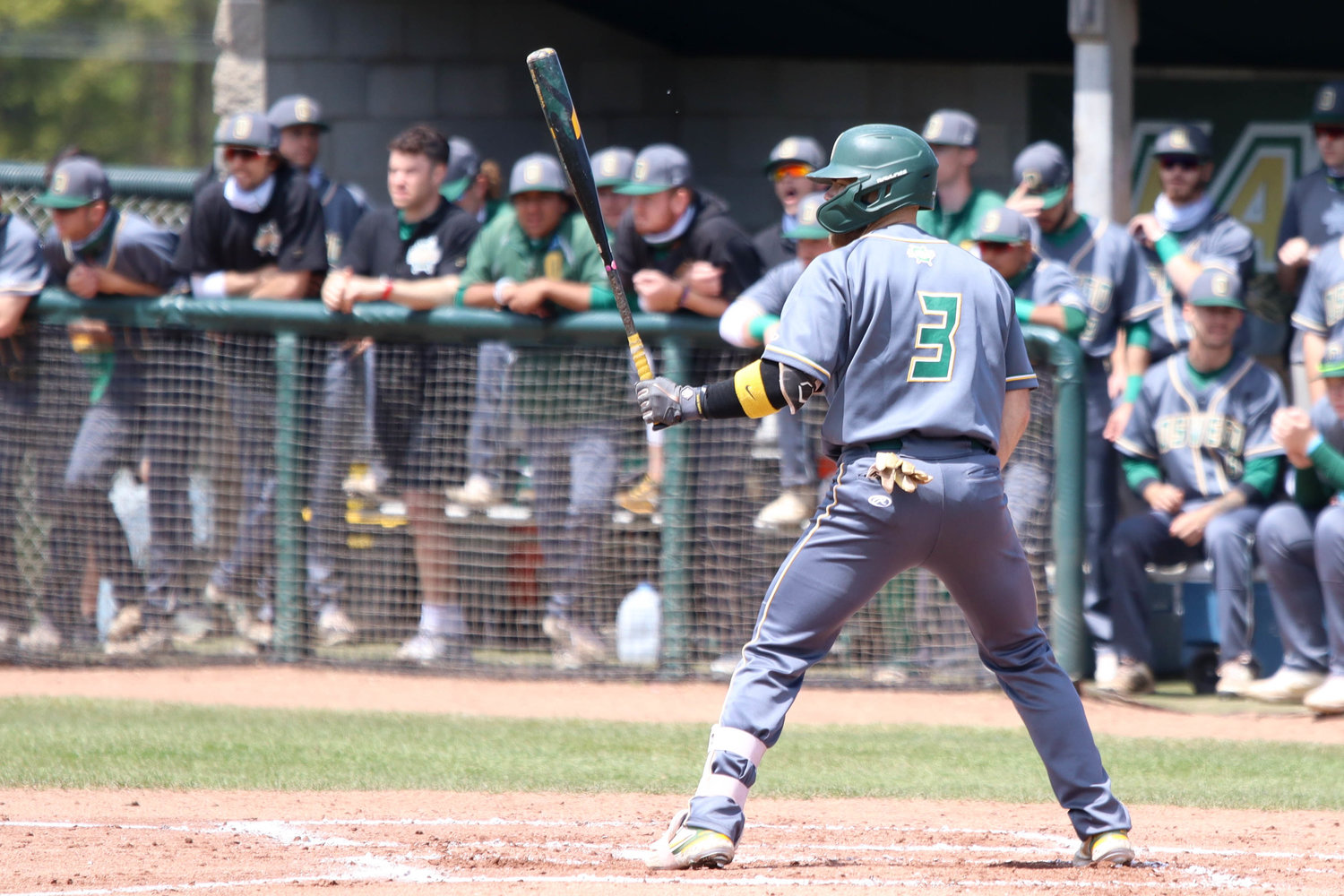 SETTING THE TABLE — Ryan Enos of SUNY Oswego, who played his high school baseball for Oriskany, is piling up eye-popping offensive stats to start his final season for the Lakers. With the team at 10-3 to start the campaign, Enos is batting .558 and slugging 1.019. He leads the team with seven doubles, five home runs, 22 RBIs and 11 stolen bases in 12 attempts.
(Photo courtesy Alexis Fragapane)
Previous Next
Posted Thursday, March 31, 2022 8:30 am
Ron Moshier
Sports columnist

He is 13 games into his final collegiate baseball season, and SUNY Oswego’s Ryan Enos is off to the best start of his school record-breaking career. That’s a fact.

Just don’t ask the senior infielder from Oriskany to explain it.

“I really can’t,” Enos said earlier this week, not long after returning from the team’s annual spring break trip with a .558 batting average and three single-game school records. “I’m just seeing it really well. I’m on time for everything. ... I just started out hot and have been able to continue it.”

How hot? Well, Enos entered the week ranked in the top 10 in all of NCAA Division III baseball in three categories. He was fifth in batting average (.558) and slugging percentage (1.019) and eighth in on-base percentage (.636).

Enos also leads the team with seven doubles, five home runs, 22 RBIs and 11 stolen bases in 12 attempts, and the Lakers, not coincidentally, are off to a 10-3 start.

The 5-foot-9, 175-pound Enos still doesn’t consider himself a power hitter. “No, definitely not,” he said. “They just happen sometimes.”

But it happened a school-record three times when Oswego outslugged Keystone College 27-14. Besides his three solo homers, Enos finished 6-for-7 with five RBIs, and his six hits and five runs scored broke two other program records.

“I’ve never been in a game like that before,” he said. “I got to hit in each of the first four innings and I had nine (plate appearances). It was pretty crazy.”

Those first 13 games were played in Maryland, Virginia and Florida, and eight of those games were played against teams nationally ranked at one time or another in the Top 25, including a three-game set against No. 1 Salisbury. Along the way, the Lakers beat No. 18 Shenandoah, No. 6 Rowan and No. 13 Johns Hopkins.

Enos has hit safely in every game, and has twice been named the SUNY Athletic Conference’s Athlete of the Week. He hit two more solo homers and had four hits and six RBIs in a win over Beloit and he drove in four runs with a pair of doubles in a win over Salve Regina.

Enos, a fifth-year senior — Oswego played only nine games in a 2020 season suspended by the coronavirus pandemic — has a double-major in wellness management and business administration and is minoring in athletic coaching. He is a three-time first-team Academic All-American.

On the field, he shared SUNYAC Player of the Year honors and was named to the All-Region first team after hitting .369 last season. He began the week as a .363 career hitter and he is already Oswego’s all-time record holder with 165 runs scored and 56 doubles.

Enos played for the Utica Blue Sox the past two seasons, batting .293 and .298, and he plans to return to the Perfect Game Collegiate Baseball League team later this year. He spent the offseason working out six days a week at the Accelerate Sports Complex in Whitestown. He lifted weights and spent hours in the batting cage, working out alongside two other SPI Fitness members — Siena College senior outfielder Vincenzo Castronovo (Utica/Thomas R. Proctor) and Carson-Newman University senior catcher Matt Parkinson (Whitesboro).

Castronovo, a Bryant University transfer, slugged a three-run homer in Sunday’s 11-5 win over Saint Peter’s. He also went 4-for-5 with a pair of RBI doubles in loss to The Citadel, and he’s hitting .239 with 13 RBIs for the Division I Saints, who started 0-9 and 2-16 but have won their last three games.

Parkinson is back in Tennessee playing for Division II Carson-Newman College. The Eagles entered the week 17-15 and Parkinson was hitting .263 with a home run and eight RBIs.

Like Enos, SUNY Cortland graduate student Zach Durant (Verona/VVS) earned an early-season honor from conference coaches when he was named SUNYAC Pitcher of the Week on March 22. The Red Dragons’ captain has started five games for nationally-ranked Division III Cortland and has yet to allow an earned run, going 3-0 with 16 strikeouts in 22 1/3 innings.

Slippery Rock University senior catcher Connor Hamilton (Forestport/Adirondack) helped his Division II team from Pennsylvania win its first 10 games and climb into the Top 25 nationally. The 6-foot-2, 235-pound Hamilton opened the season with a 3-for-3 day — including two homers and three RBIs — and the next day he hit a grand slam and was 2-for-2 with three walks. He entered the week leading The Rock with a .436 batting average, 19 runs, six home runs, 19 RBIs and 11 walks. Hamilton hit safely and had at least one RBI in 11 of Slippery Rock’s 12 games, and he was tied for third nationally in home runs per game.

Closer to home, junior outfielder Zach Brush (New York Mills/Notre Dame) and graduate student Derrick Miller (Westernville/Rome Free Academy) starred in Division II Le Moyne College’s 16-2 win over Saint Michael’s last Saturday. Brush had three hits and four RBIs and Miller was 4-for-4 with two RBIs. Brush, the Dolphins’ leadoff hitter, homered and had four RBIs in an early-season win over Shippensburg, and he is hitting .382 with 14 RBIs and eight stolen bases. Le Moyne is off to a 9-11 start.