A three-hit, three-RBI day at the plate and a diving catch in centerfield were the contributions by junior Savannah Cole in helping New Hartford to a Section III Class A softball … 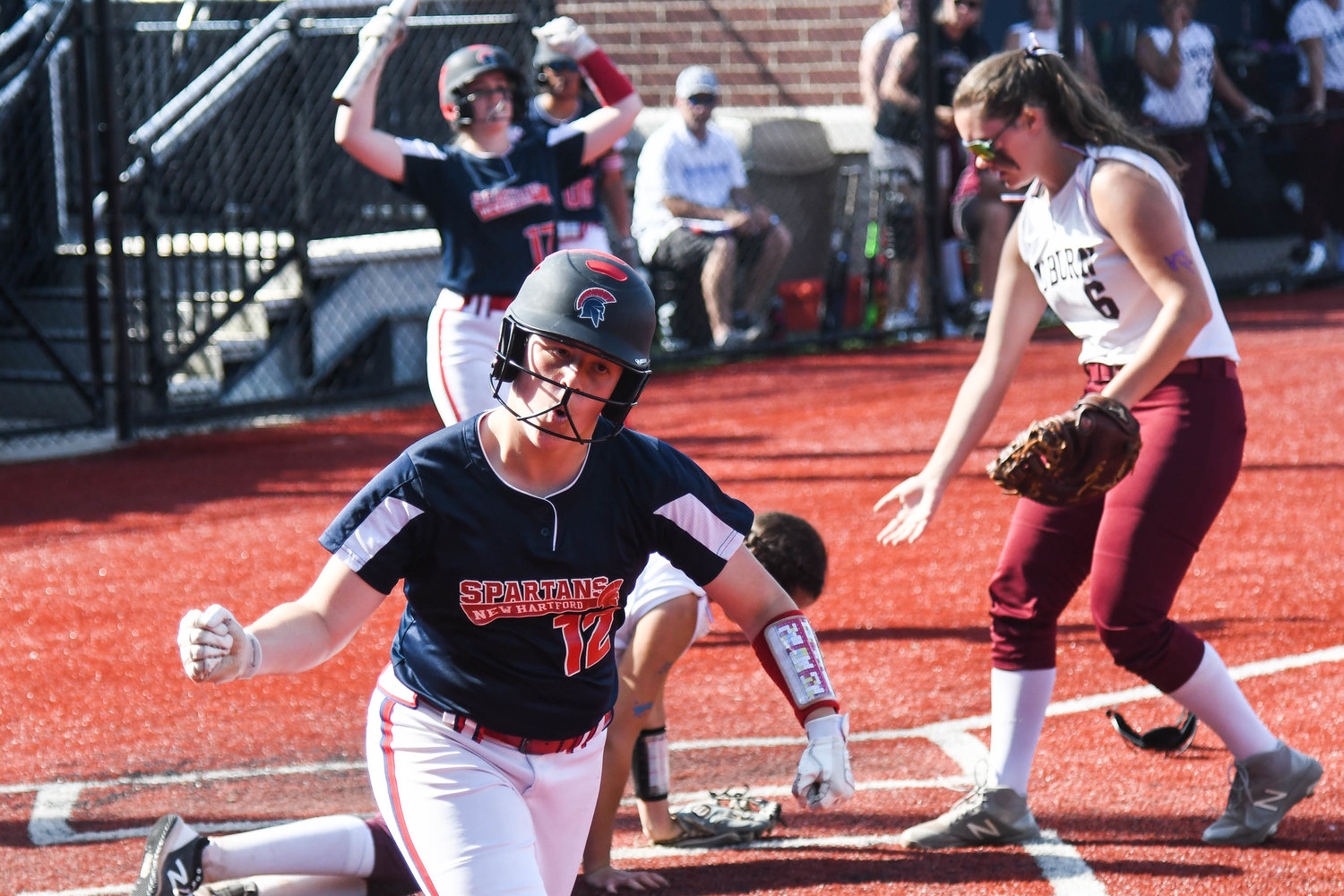 New Hartford baserunner Sienna Holmes celebrates after sliding in safe at home plate during the Section III Class A final against Auburn on Thursday at Onondaga Community College in Syracuse. Holmes pitched the Spartans to a 6-3 win.
(Sentinel photo by Alex Cooper) 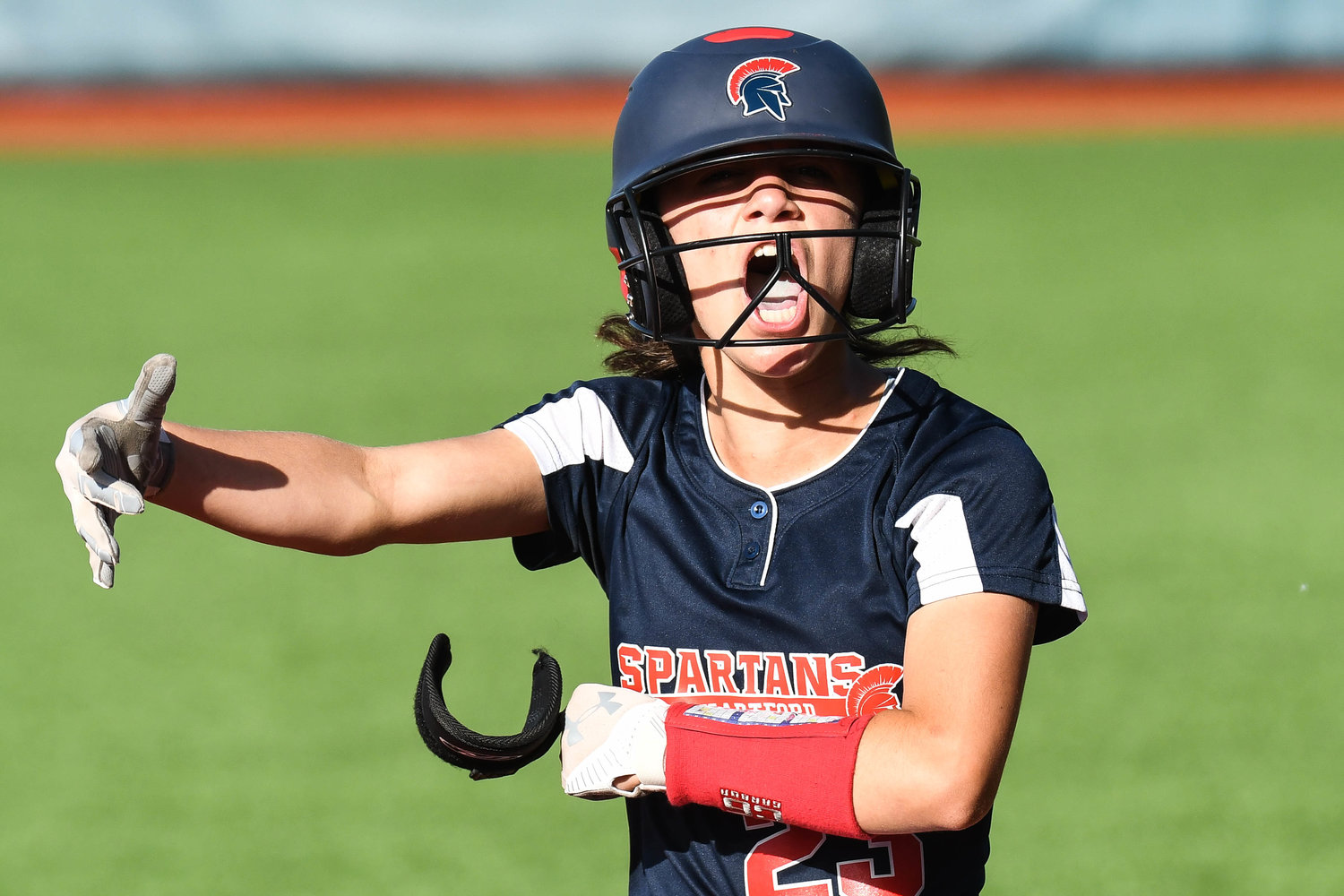 New Hartford's Olivia Vitullo yells in excitement after hitting a single during the Section III Class A final against Auburn on Thursday at Onondaga Community College. She and her teammates won 6-3 for the softball program's first sectional title since 2008.
(Sentinel photo by Alex Cooper) 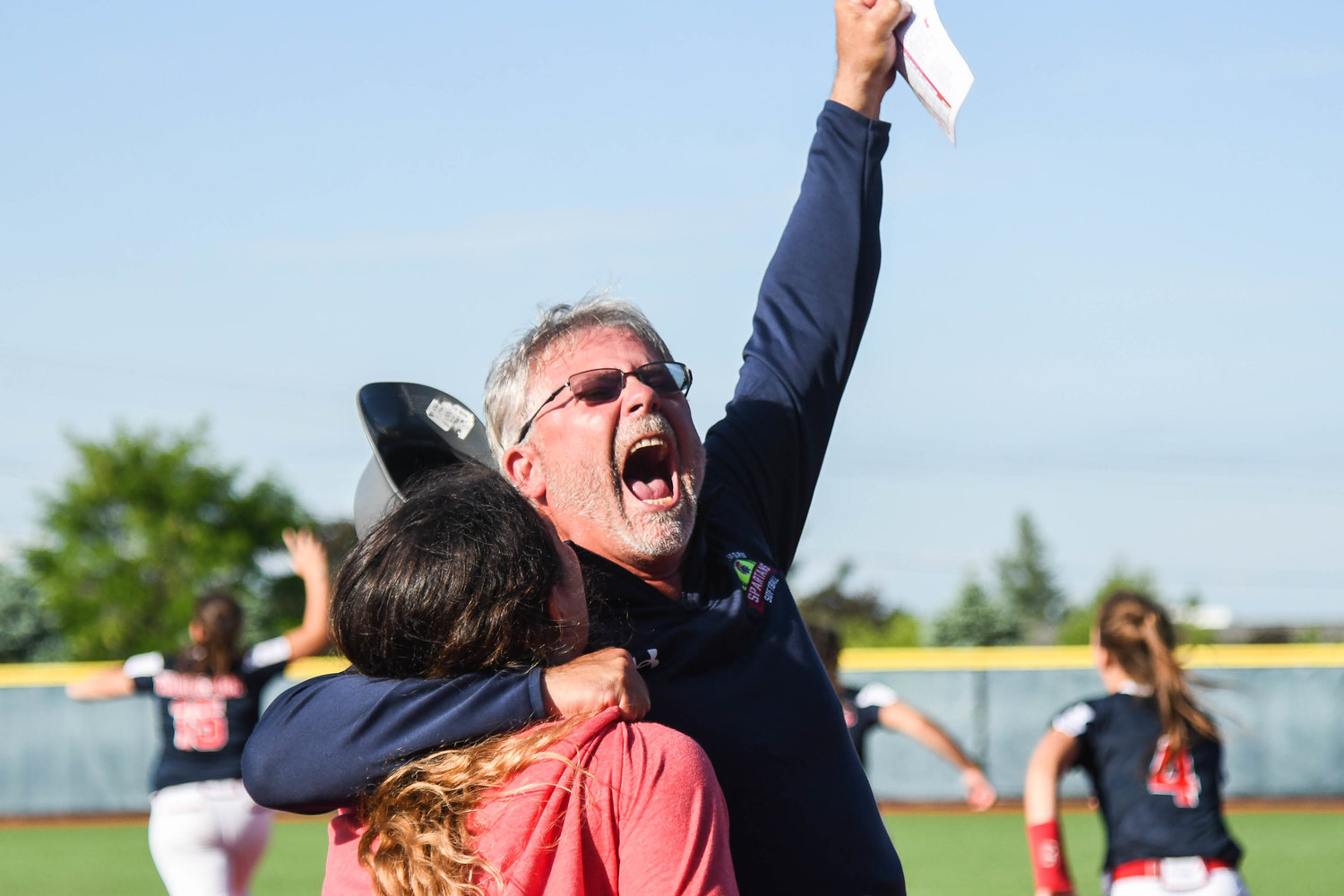 New Hartford head softball coach Dan Stalteri celebrates after winning the Section III Class A title 6-3 over Auburn on Thursday at Onondaga Community College. It is the first full season for Stalteri at the helm, after his first year was wiped out by COVID-19 and last season was only limited games.
(Sentinel photo by Alex Cooper) 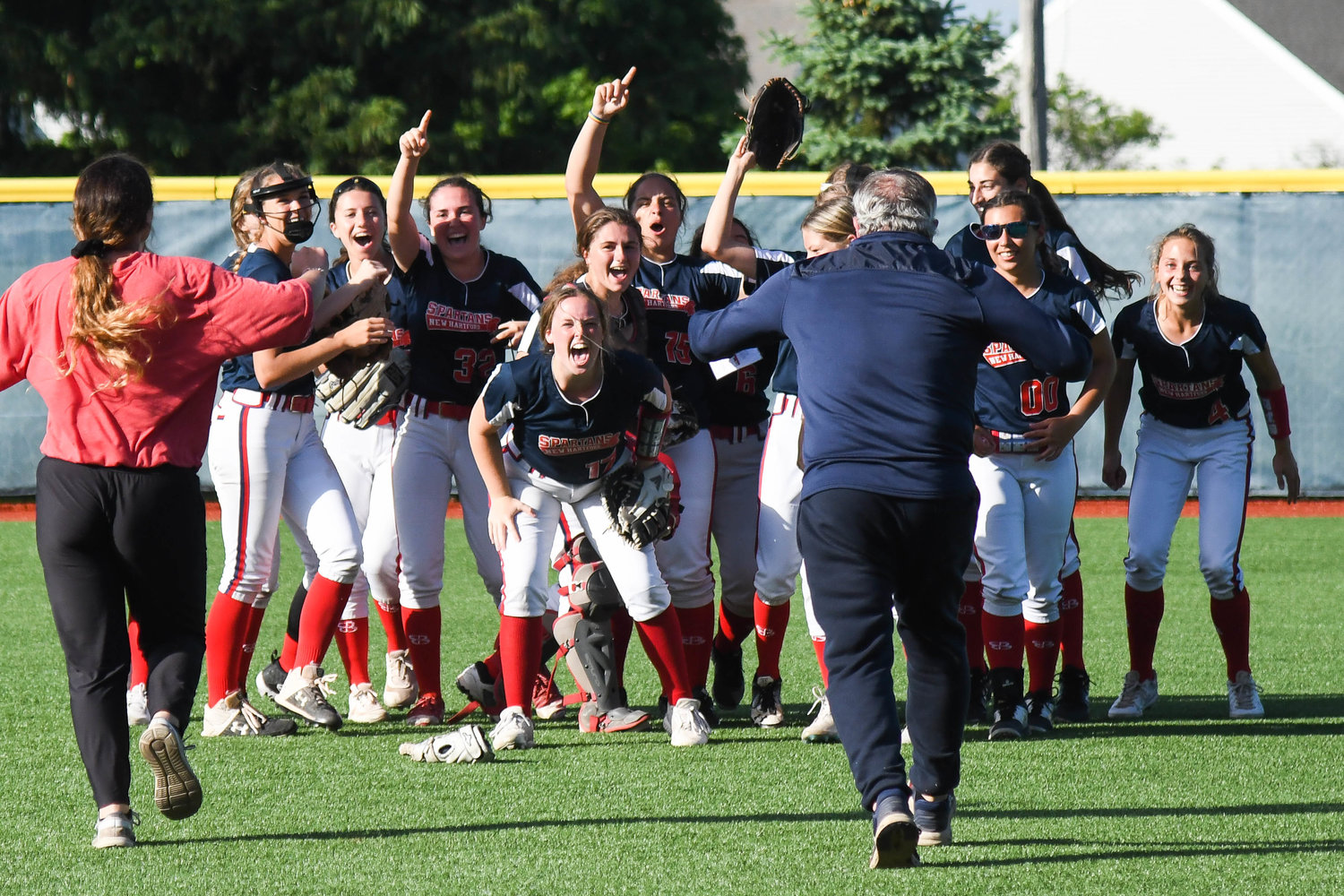 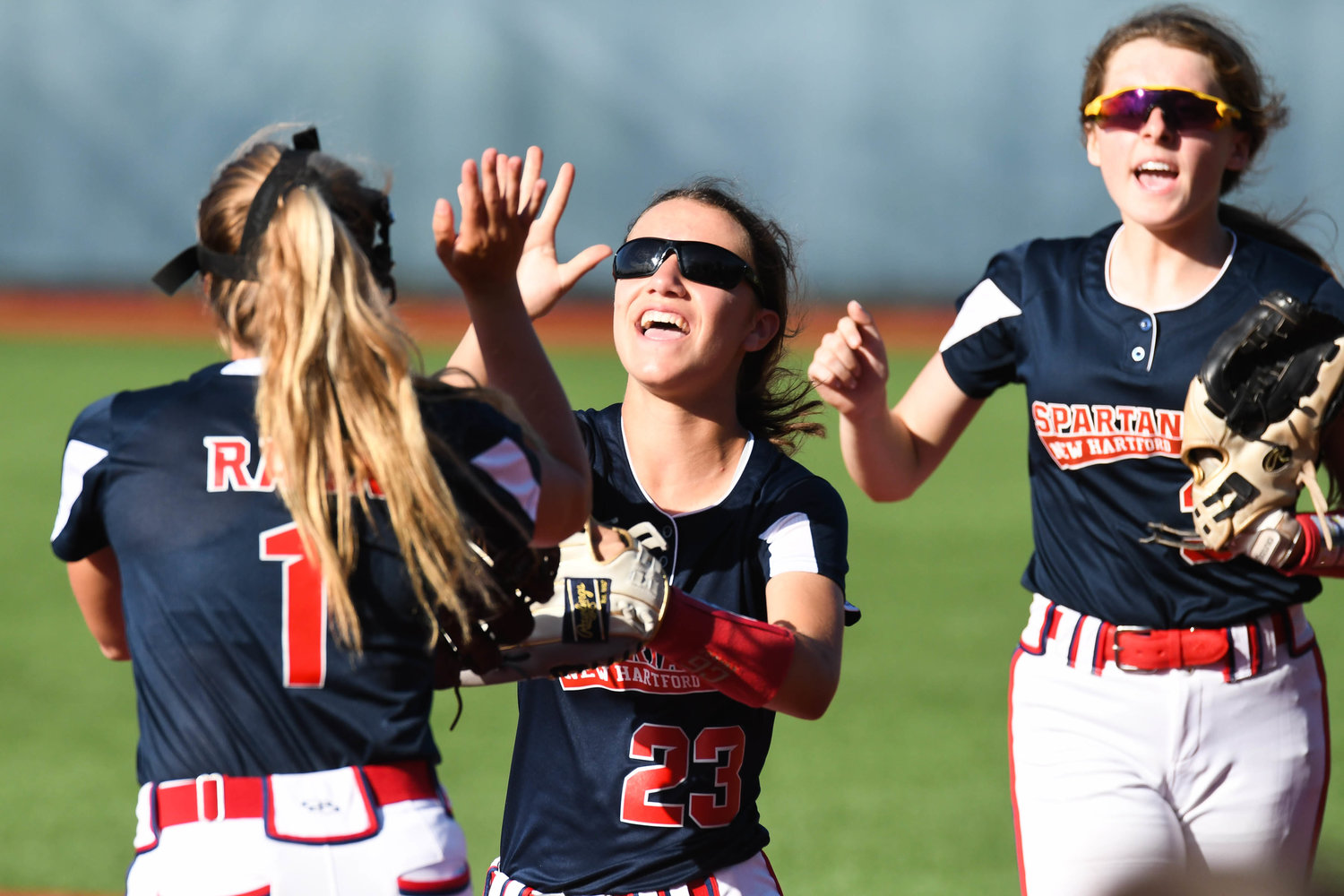 New Hartford player Olivia Vitullo (23) celebrates with teammate Taylor Raux (1) after making a play in the outfield during the Section III Class A final against Auburn on Thursday at Onondaga Community College.
(Sentinel photo by Alex Cooper) 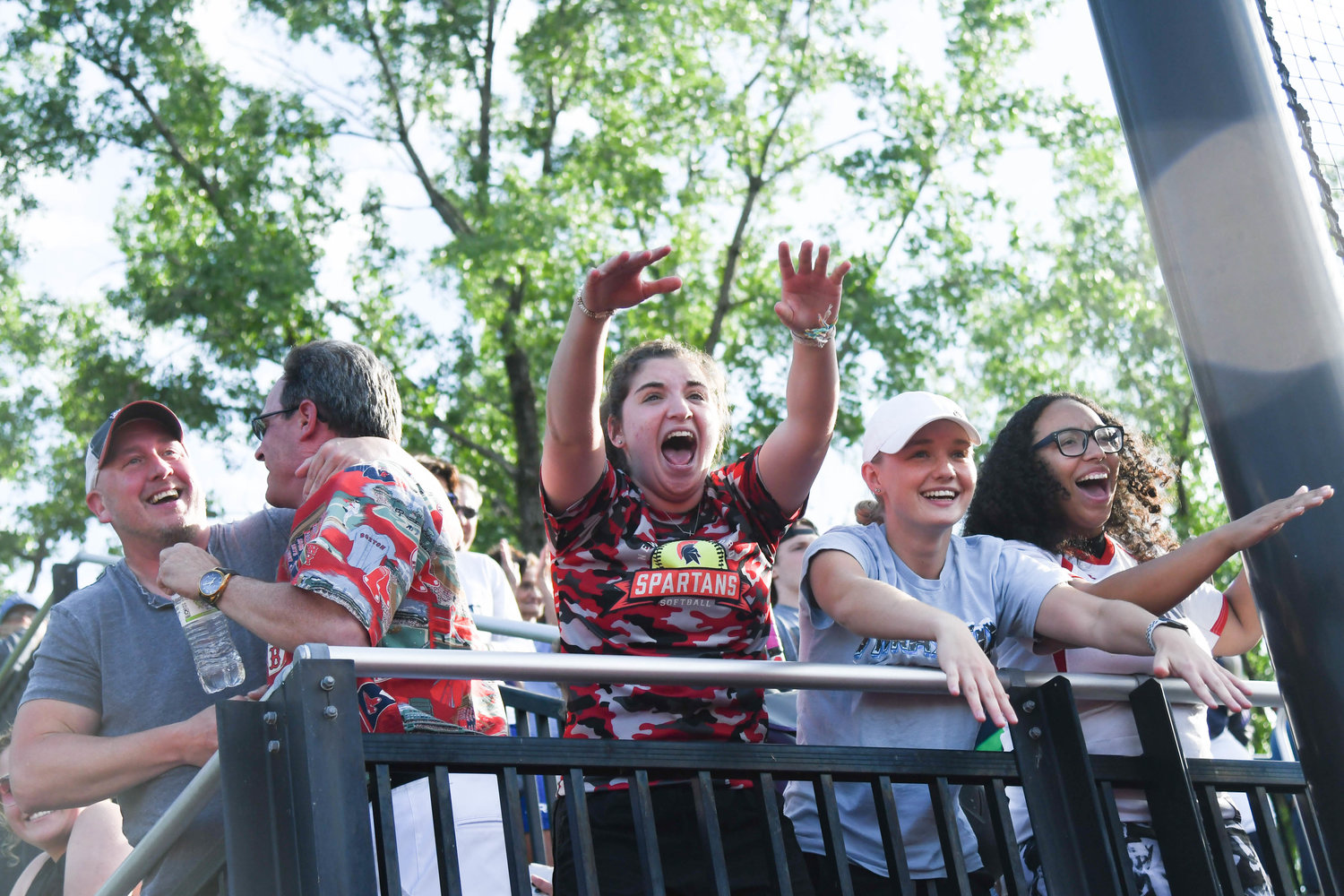 SYRACUSE — A three-hit, three-RBI day at the plate and a diving catch in centerfield were the contributions by junior Savannah Cole in helping New Hartford to a Section III Class A softball championship Thursday.

New Hartford, the four seed, extended its win streak to eight games with a win over the second seed. The win pushed the Spartans’ record to 16-4. The two teams did not play each other in the regular season.

“It feels awesome. We worked all year,” said Cole, who won a state title in the fall with the soccer team. “I went in with an all-or-nothing mindset.” Cole’s diving catch in centerfield with one on and no outs in the fourth inning came with her team up by two runs. “Offense, defense, you have to have to give it all on both,” she said.

Head coach Dan Stalteri took over the job three season ago, but COVID-19 wiped out one season and shortened the next. Now, with a full schedule, the team is at the top of Class A in the section. “We’re fighters. It’s a team concept,” he said. “They don’t get fazed by too much.”

Stalteri’s message to the team the night before the game, he said, was: “Let’s get on top quick.” Message received. And it propelled the Spartans to the school’s 10th Section III title this school year. It was the team’s first sectional title since 2008.

Cole smacked a two-run single up the middle in the top of the second for the game’s first runs. She drove in Raven Gonzales and Danielle Lucas, who’d both walked and had moved over on a bunt.

Auburn got one run back in the bottom of the inning. Runner Olevia McLeod came around to score from second on a bunt that was bobbled by pitcher Sienna Holmes then thrown away.

Holmes got that run back singlehandedly when she led off the third with a triple to the wall in right centerfield then scampered home on a wild pitch to restore the two-run lead.

The Spartans started the top of the fourth with an extra base hit as well, this time a double by Cole. She came in to score on a fielding error. Alex Volo, who reached on the error, stole second and came all the way around to score on an error on the play.

Cole came through again in the fifth, with a single to score Sophia Burynski.

Auburn put up two runs in the fifth on an Emma Merkley single up the middle that scored Grace Hoey and Sydney Marinelli. That cut the Spartans’ lead to three.

“They gave me a couple scares. but when (Holmes) got through the fifth,” Stalteri said he felt more comfortable. When she headed out to pitch the seventh, he told that for all the critics, “now’s your time to prove them wrong.” And she retired Auburn in order to seal the win.

Holmes allowed three runs, two of them earned, on four hits and four walks. She struck out five, giving her 122 strikeouts in 113 innings this season. Cole said Holmes “has held down the mound all season.”

Madison Lowe took the loss for Auburn, allowing six runs on eight hits and five walks. She struck out eight.

New Hartford will play Saturday at Carrier Park in DeWitt at a time to be announced against Section II’s Troy, which beat Massena 16-1 in five innings.