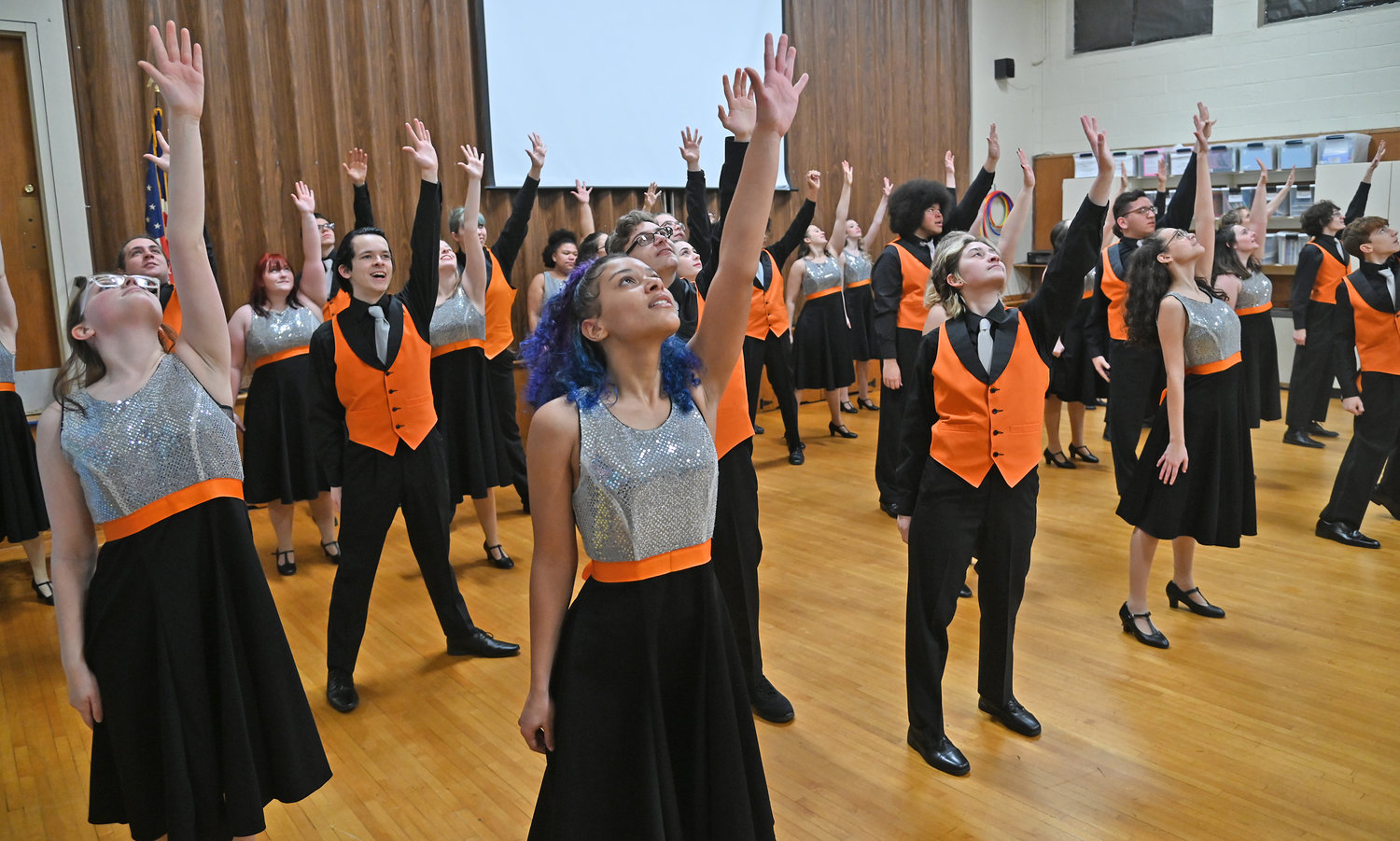 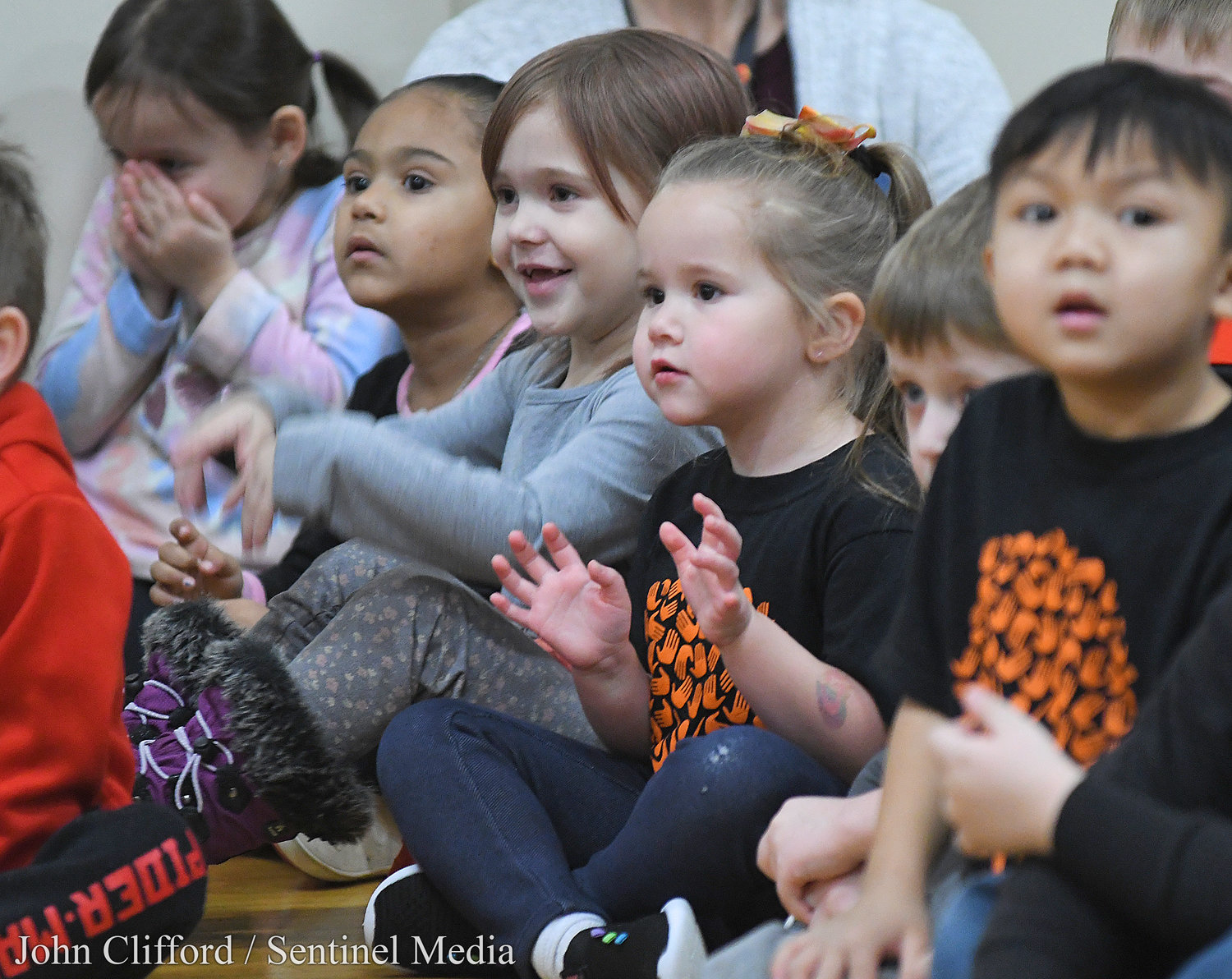 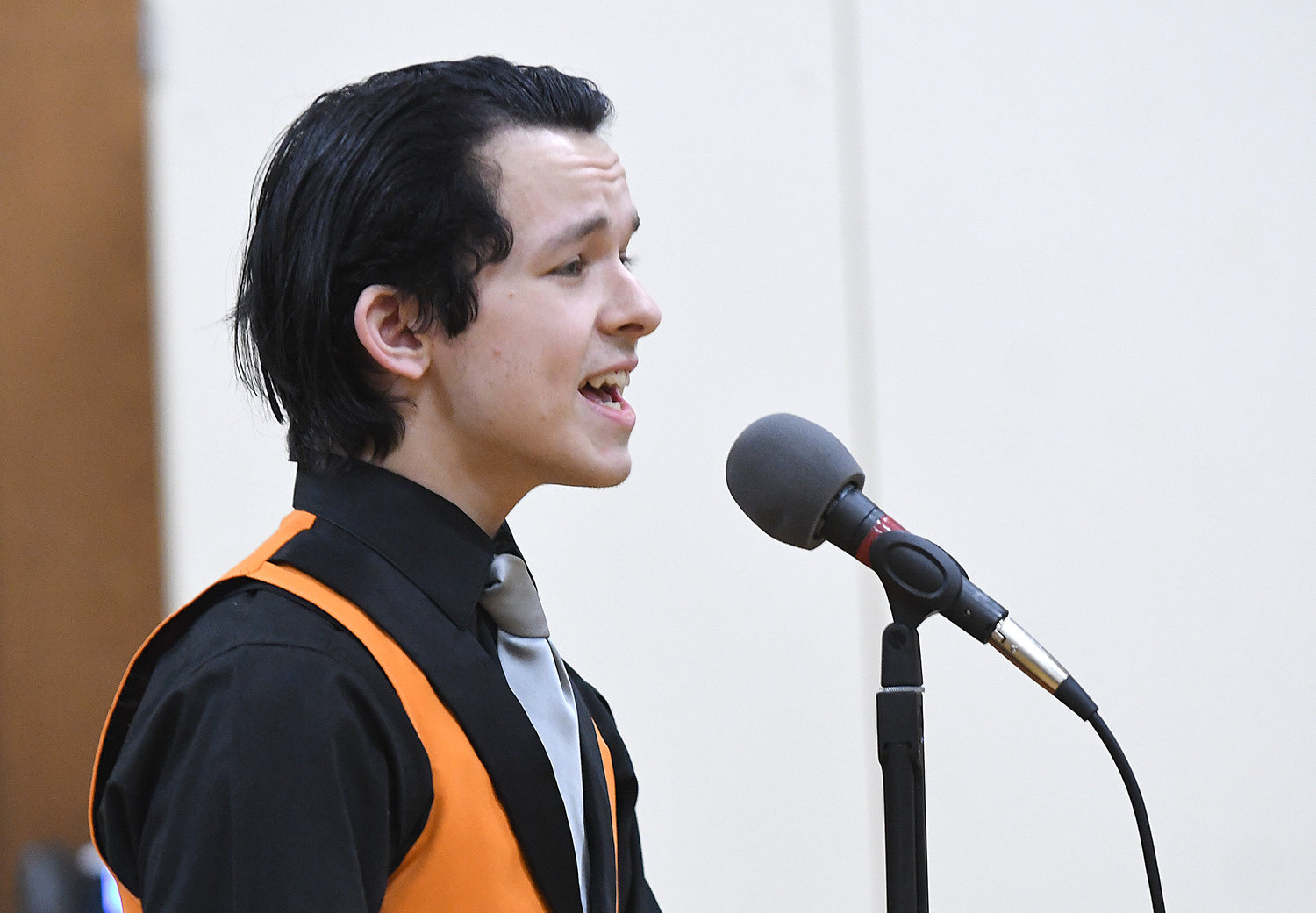 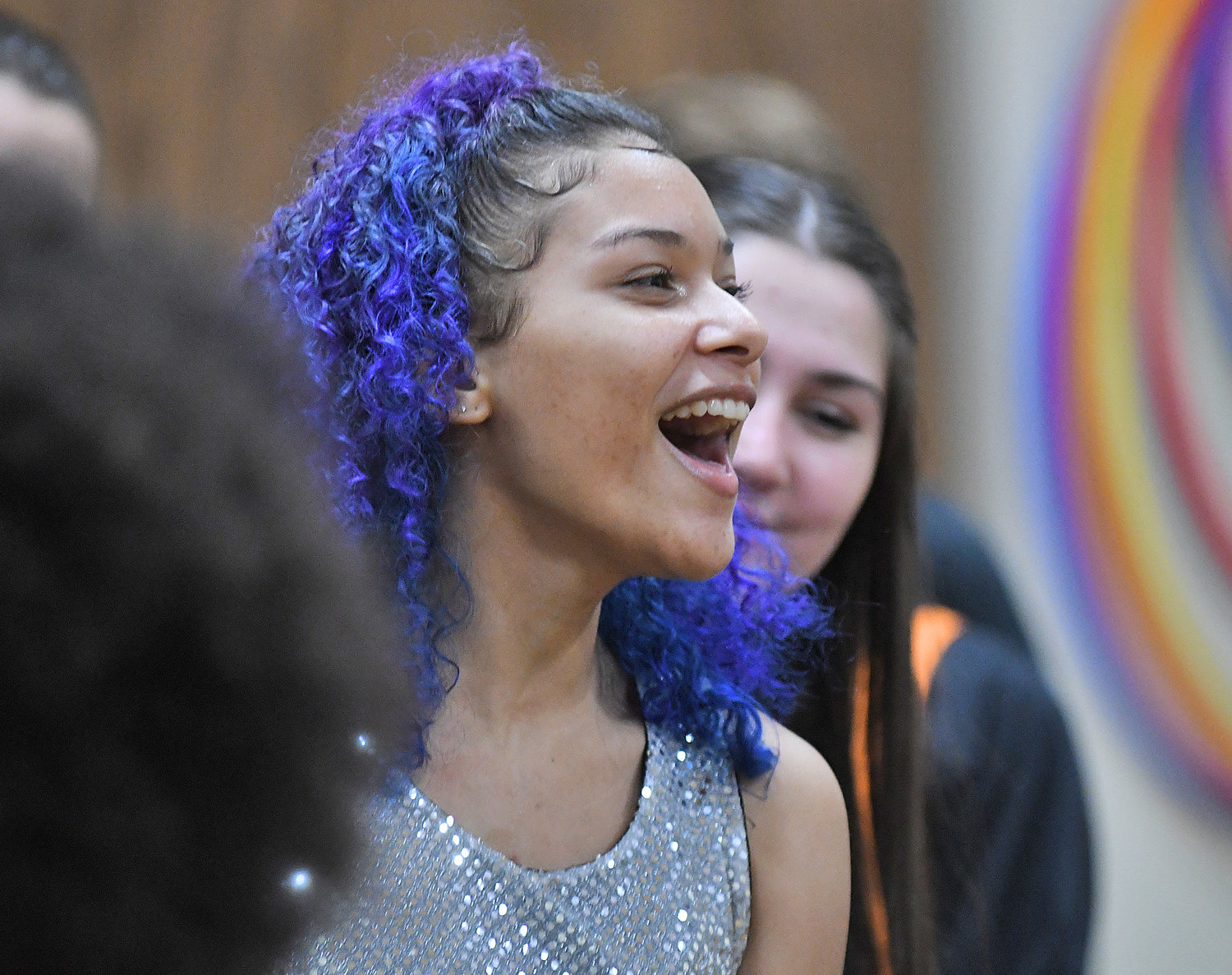 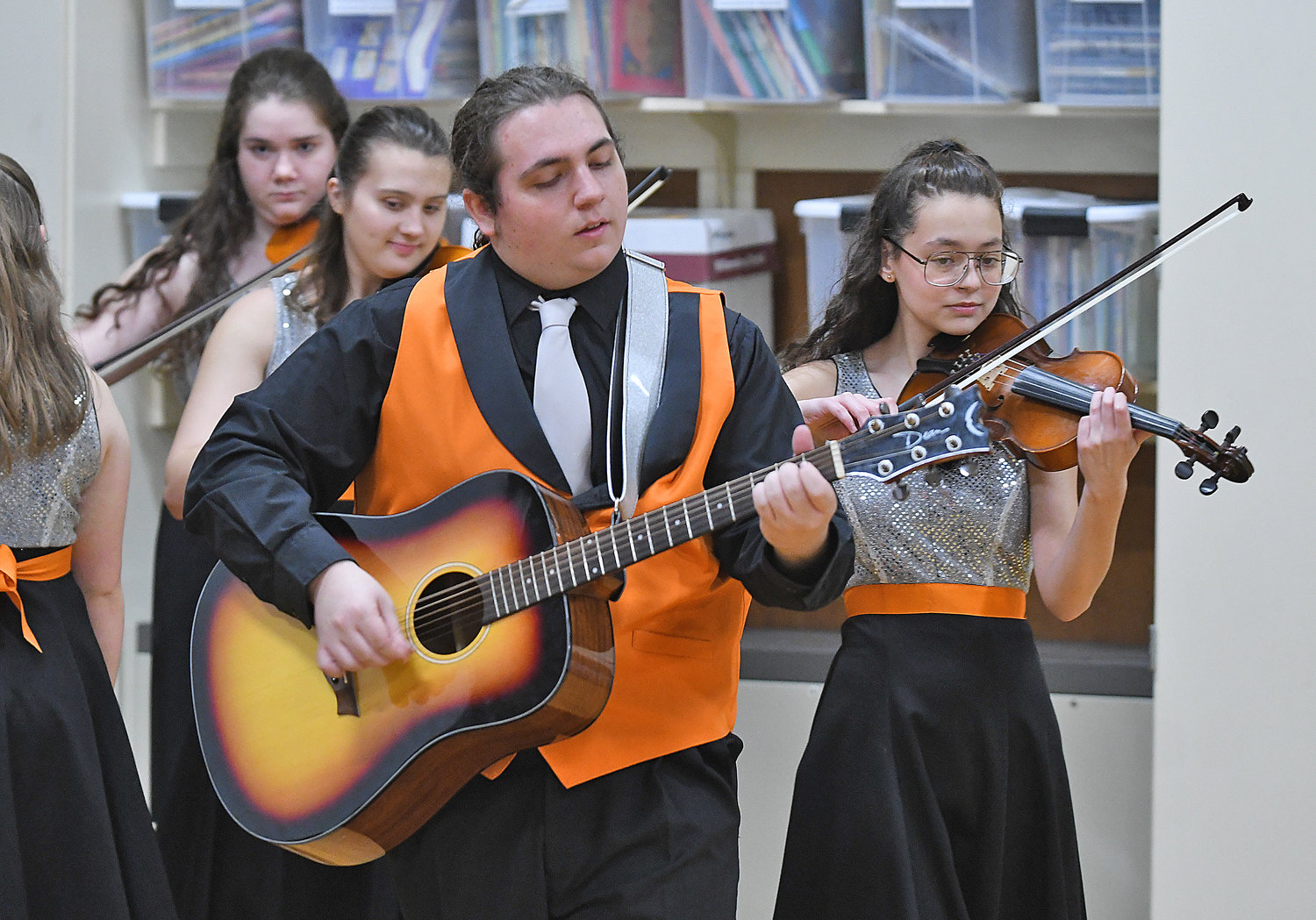 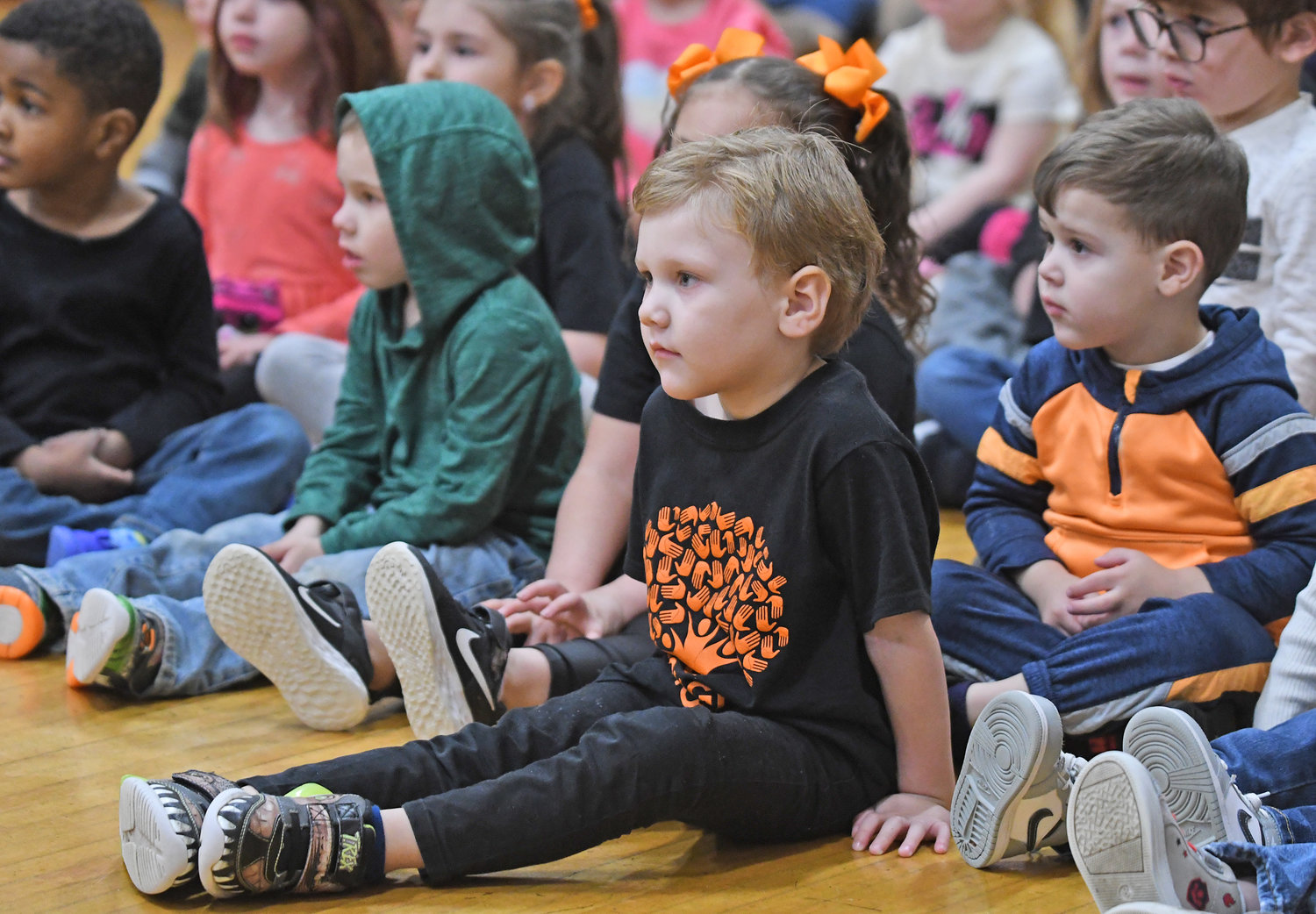 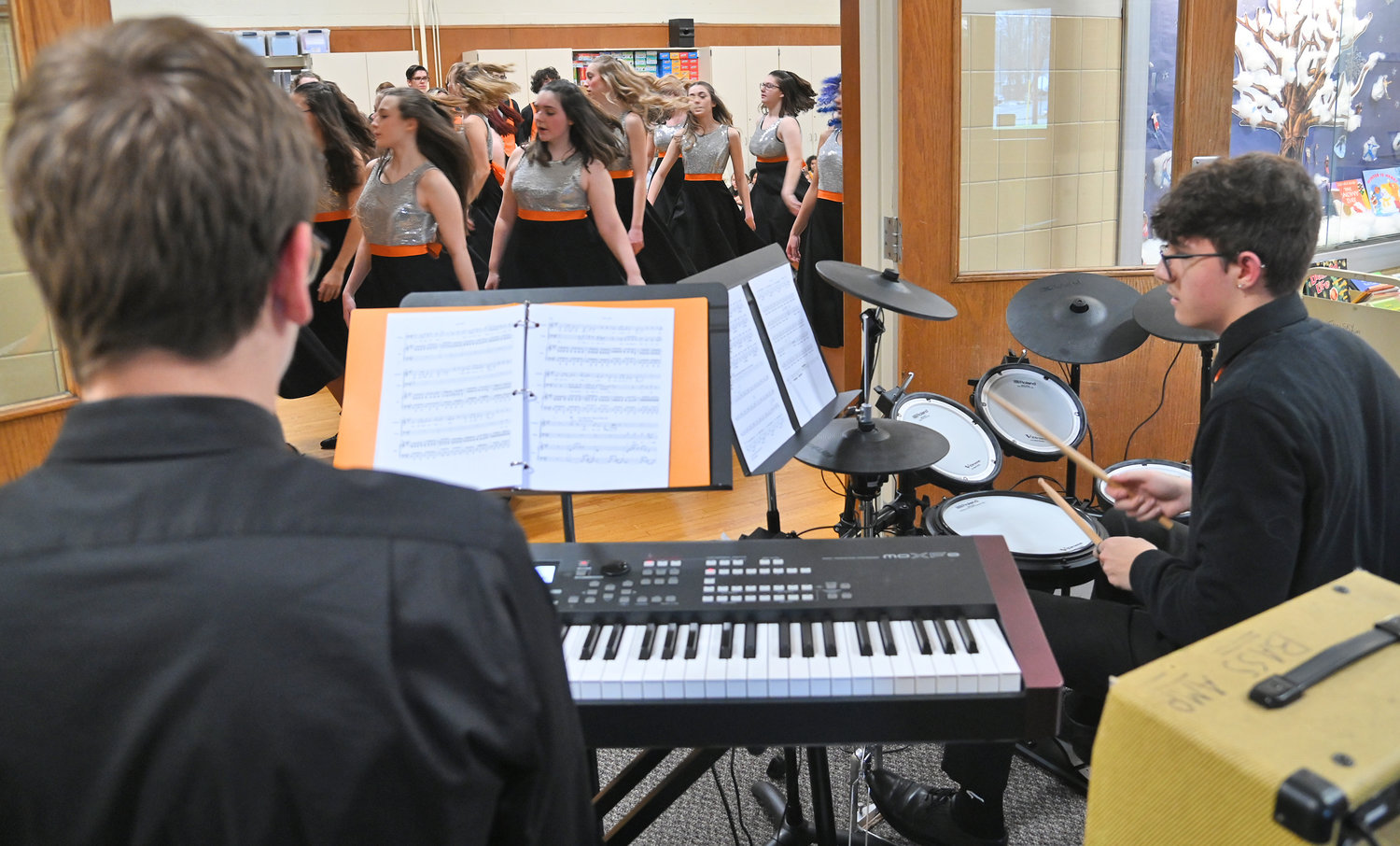 The Rome Free Academy Rhapsody Show Choir performs Friday, Jan. 13 at Clough School in Rome. The band was out in the hallway and singers and dancers were in the gym.
(Sentinel photo by John Clifford) 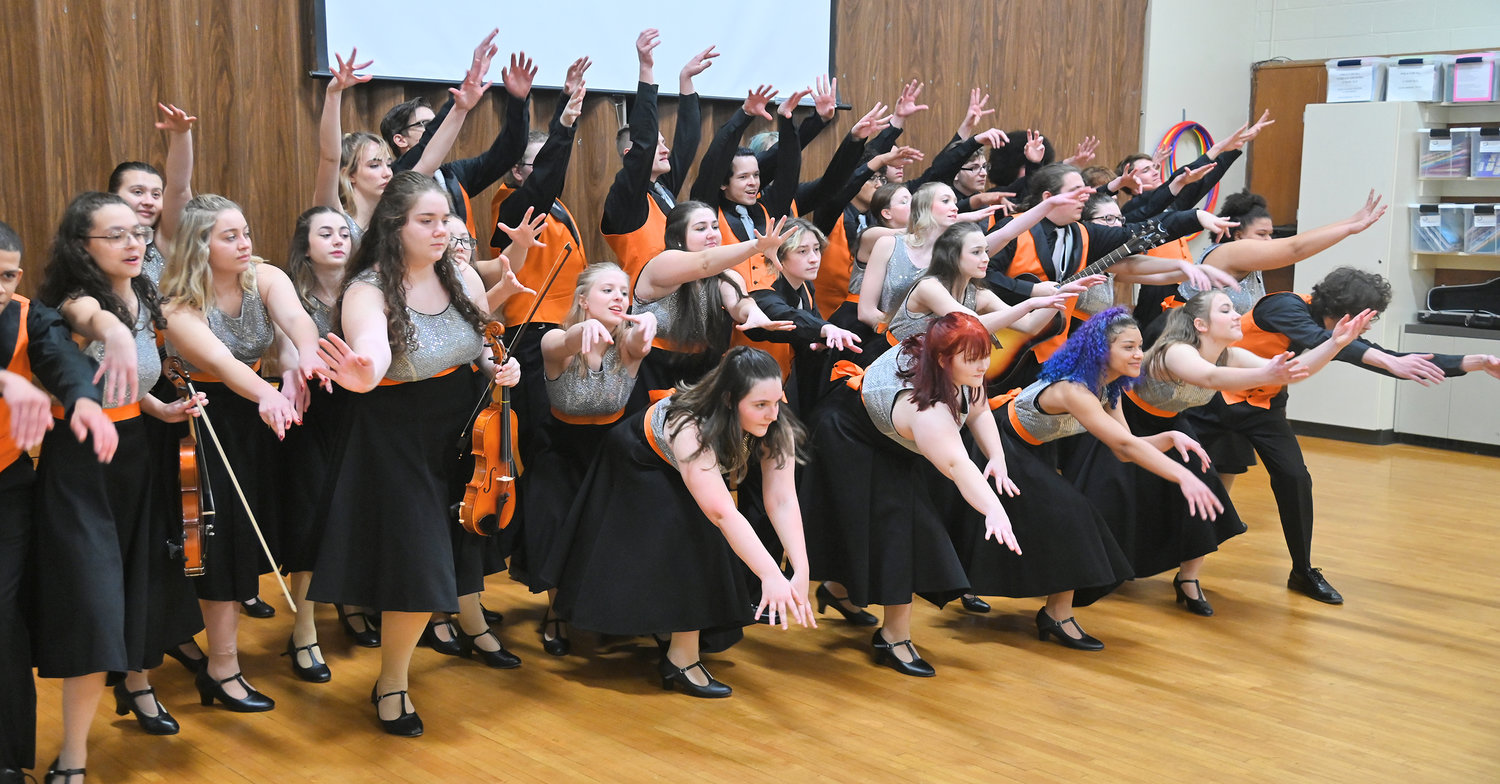 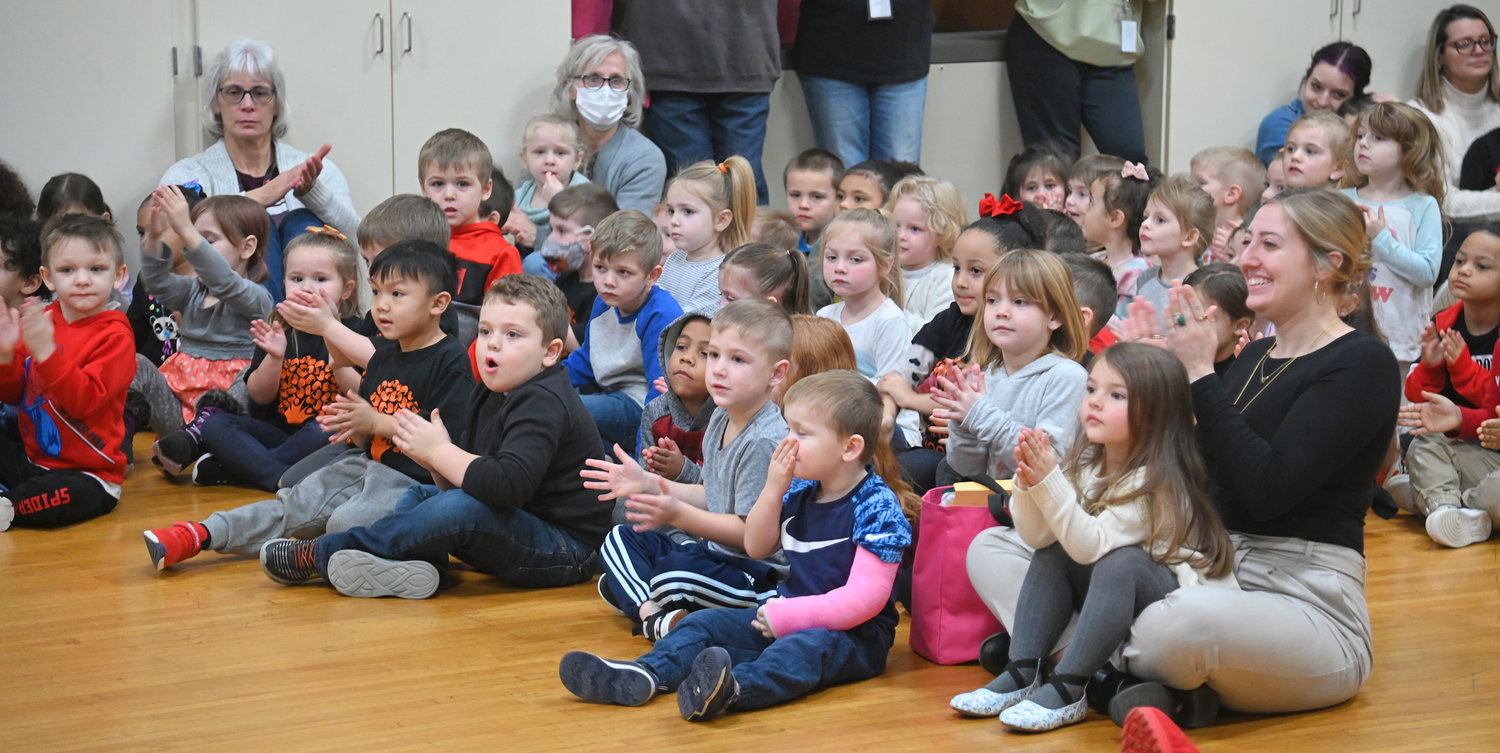 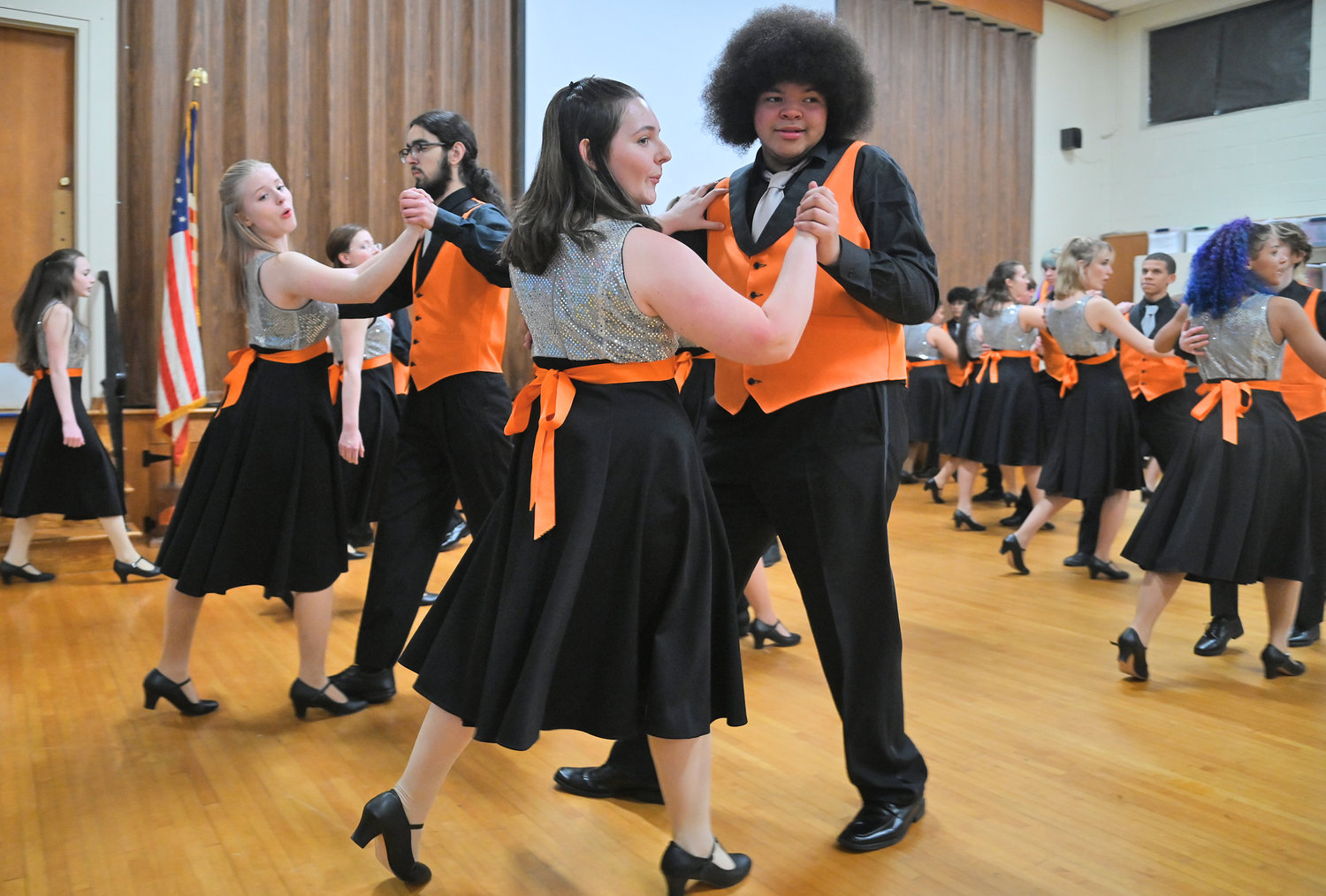 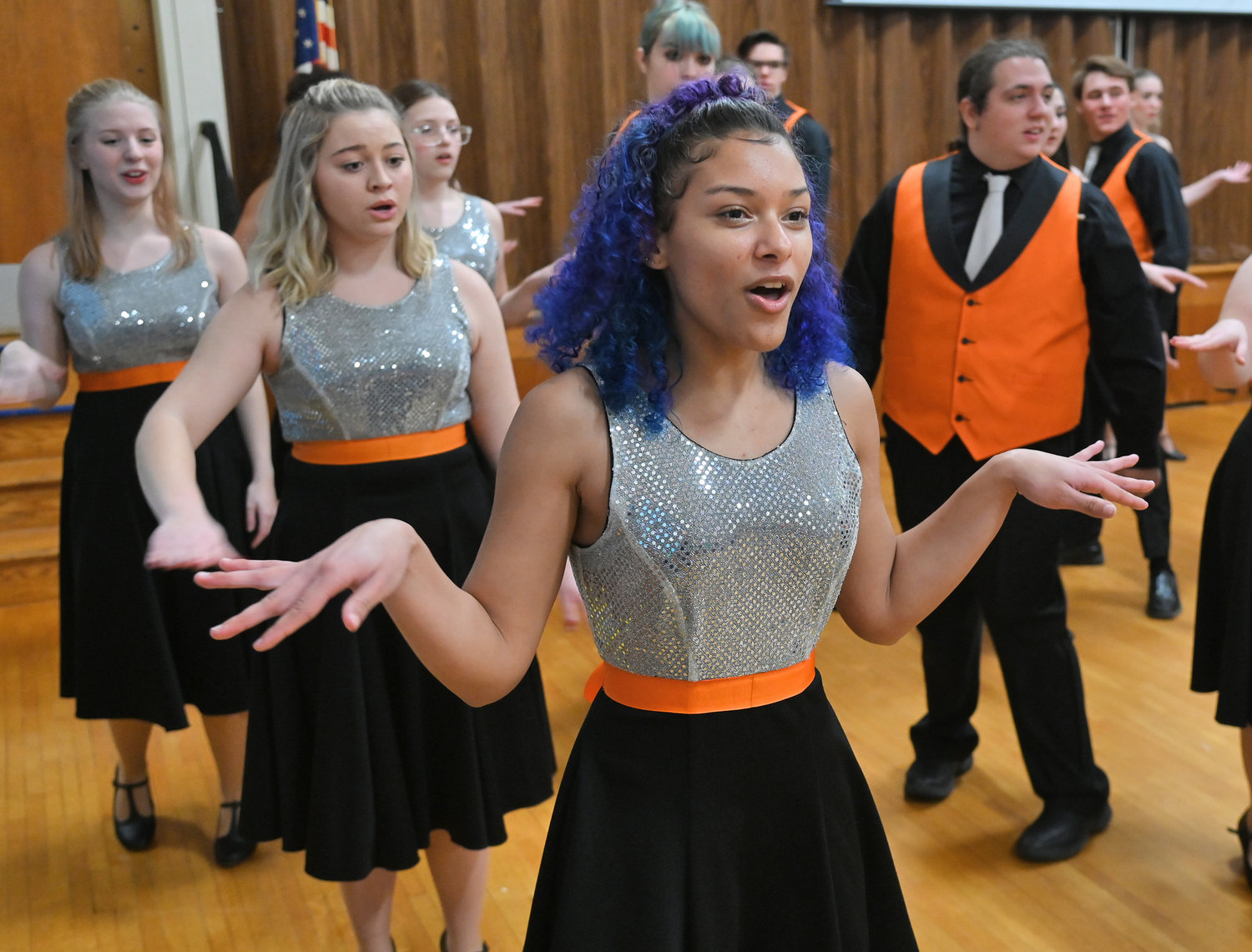 The non-competitive event is open to the public. In addition to the Rhapsody Show Choir from RFA, the event will bring out student choirs from the Frankfort-Schuyler, Herkimer, Holland Patent, New Hartford, Norwich, Sauquoit, Vernon-Verona-Sherrill, Waterville, Westmoreland and Whitesboro school districts.

There were student auditions at the beginning of November, Jake Meiss said, and then they began to rehearse two to three days a week. He said there are 38 students in grades 9-12 at RFA in the Rhapsody Show Choir and Kristen Meiss said there will be more than 260 student participants from all the schools combined at the festival.

There are multiple benefits to being a part of the group, Jake Meiss explained.

“RFA students benefit from being in Rhapsody by becoming better performers - not just their singing, but definitely their dancing and stage presence as well,” he said. “All the schools benefit from participating in the Show Choir Festival by meeting and collaborating with similar students from other schools, making new friends and getting an appreciation for other schools’ music programs.”

Winkler said the Rhapsody Show Choir did a mini-tour of the Rome district elementary schools Friday, performing their full set at each school to share some of the festival experience in advance with their younger peers. Throughout the morning and into the afternoon they visited Clough, Stokes, John Joy and Bellamy schools.

They are expecting to also visit Denti, Gansevoort and Ridge Mills on a second tour Feb. 1, she added.

And for anyone who misses the Jan. 20 festival performance, there will be another chance to see the RFA Rhapsody Show Choir - and several college a cappella groups as well - at the Collegiate A Cappella Invitational coming up Feb. 4 at RFA. Rhapsody’s show will be the same at both events, but the other groups will be different, Kristen Meiss said.

Having so many students - as well as the directors from the different districts as well - all coming together with a common camaraderie in music is a big part of the thrill of the festival, Jake Meiss said.

“It’s such a feel good night,” he explained. “The energy level is ridiculously high, because the students are all so excited for each other. And the directors from all the other schools are great people - talented, hard working and wonderful to work with!”

Kristen Meiss echoed the sentiments about the positive energy and all of the schools supporting each other’s performances.

“We really try to stress that this is a celebration and not a competition,” she said. “I also love how we combine all of the schools together for one big finale. Seeing the stage packed full of students, all in their own schools’ uniforms, but singing and dancing together as one, is a powerful end to the evening.”

Tickets are $8 in advance and available at Jervis Public Library, 613 N Washington St. in Rome, and from students in the performing groups. Tickets will be $10 if still available at the door, but with so many groups performing the show will likely sell out. 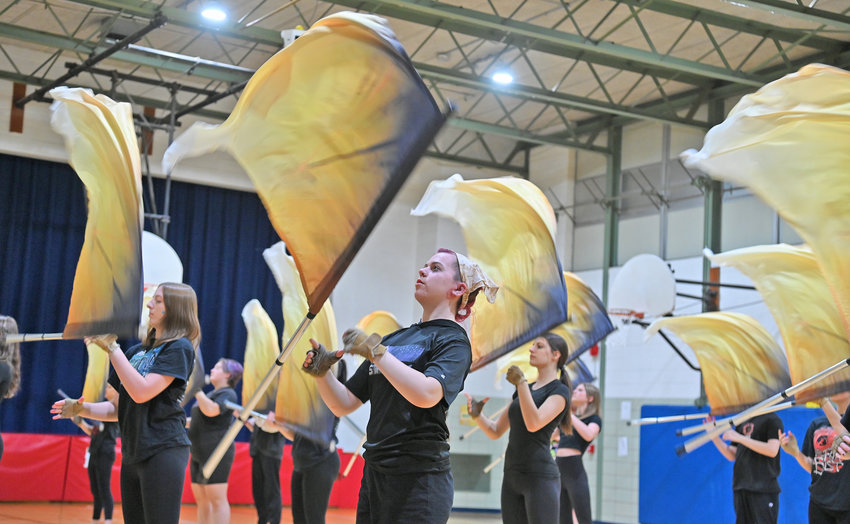 The New Hartford Winter Guard program has big plans for 2023 — a fun-filled season of hard work— that will end with going to international color guard championships.