More than 100 students from colleges and high schools across the state met at Mohawk Valley Community College Saturday for the excitement of the annual CNY Hackathon. 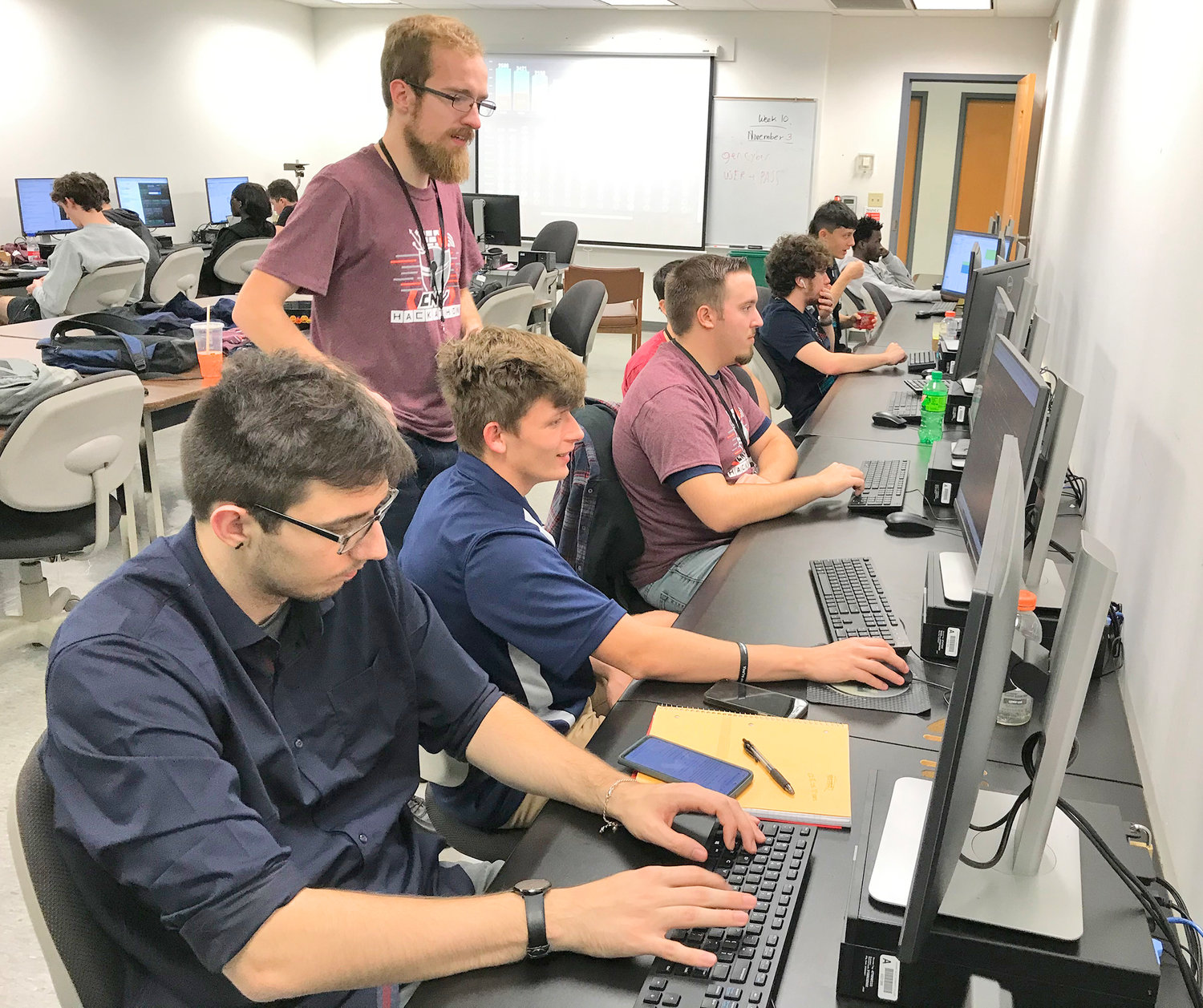 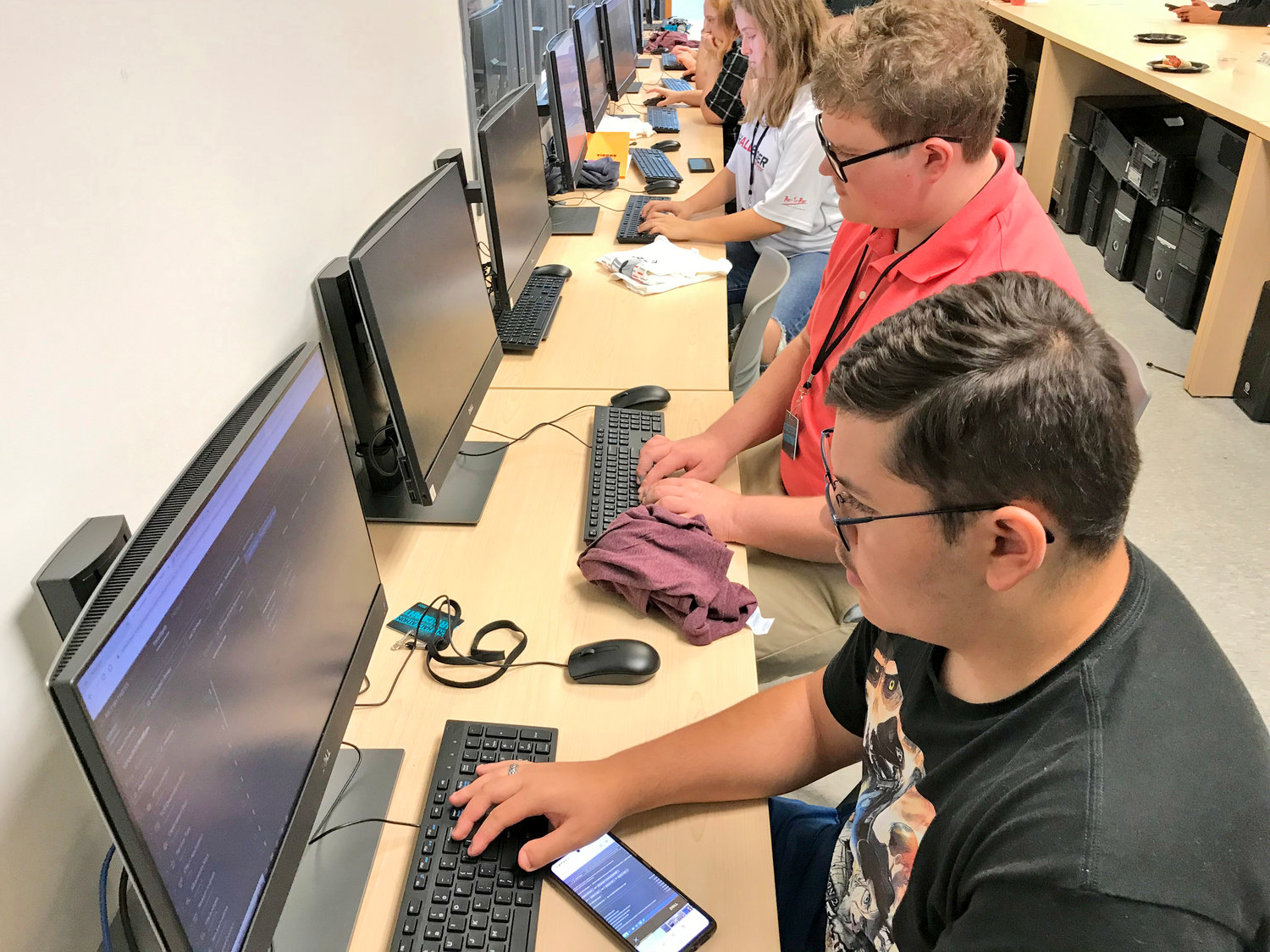 UTICA — More than 100 students from colleges and high schools across the state met at Mohawk Valley Community College Saturday for the excitement of the annual CNY Hackathon - a realistic simulation of computer hacker attacks that those students were tasked to prevent.

“This gives them a great experience they might not get in the classroom,” said event facilitator Sean Drzewiecki, a cybersecurity consultant with NetWitness in Rome and a former CNY Hackathon participant himself. “It’s something a bit different that builds on the skills they learn in the classroom and gives them the chance to learn something new, too.”

The CNY Hackathon is a collaboration between MVCC, Utica University, SUNY Polytechnic Institute in Utica, Syracuse University and University at Albany, explained Jake Mihevc, dean of the School of STEM-Transfer at MVCC and co-founder of the hackathon. It gives participants “a realistic simulation of adversarial attacks on virtual machines that students must secure in real-time to keep the bad guys out,” Mihevc said.

It was the 10th year for the CNY Hackathon, with 80 college students participating. This was the first year for the high school students to join the event, with 30 coming in from Oneida-Herkimer-Madison BOCES in New Hartford, Herkimer-Fulton-Hamilton-Otsego BOCES in Herkimer, Whitesboro High School and even St. Lawrence-Lewis BOCES in Canton.

Mihevc said the younger students had a workshop and the chance to participate as “exhibition teams.”

With its simulation of actual cybersecurity work, the CNY Hackathon offers the students a look at their own potential future roles, Mihevc explained. The event increases their engagement in the classroom as they learn the reasons they must master certain cybernetic skills and abilities, he said, and it “turbo-charges” the workforce readiness of regional cybersecurity graduates.

The event was for all skill levels and more than 50 of the students were there for the first time this year. It gave them an invaluable chance to network with each other and share their knowledge and experiences, Mihevc added.

“We mix up the students so they are working with students from other programs they just met, which cross-saturates the students with knowledge from all of the different academic programs and builds the soft skills necessary within the workforce,” he said.

Rome Free Academy 11th grader Tylor Graf admitted he is a “beginner” when it comes to cybersecurity.

“I really don’t know much about this but I am learning a lot,” he said. “It’s really fun and I would love to come back.”

“I think it’s a really nice opportunity for all of us,” added ninth grader Michael Cannistra from Notre Dame Junior/Senior High School in Utica. “It’s opening up all sorts of pathways for us and showing us what people in cybersecurity do.”

The event has been so successful the National Security Agency has taken notice, Mihevc noted. MVCC has been designated by the NSA and the Department of Homeland Security as the Regional Resource Center for the northeast region of the United States.

“The ongoing success of the CNY Hackathon has led to MVCC receiving ongoing funding from the National Security Agency to run a version of the event across the country each year, and last year over 55 colleges and 500 students participated,” Mihevc said.