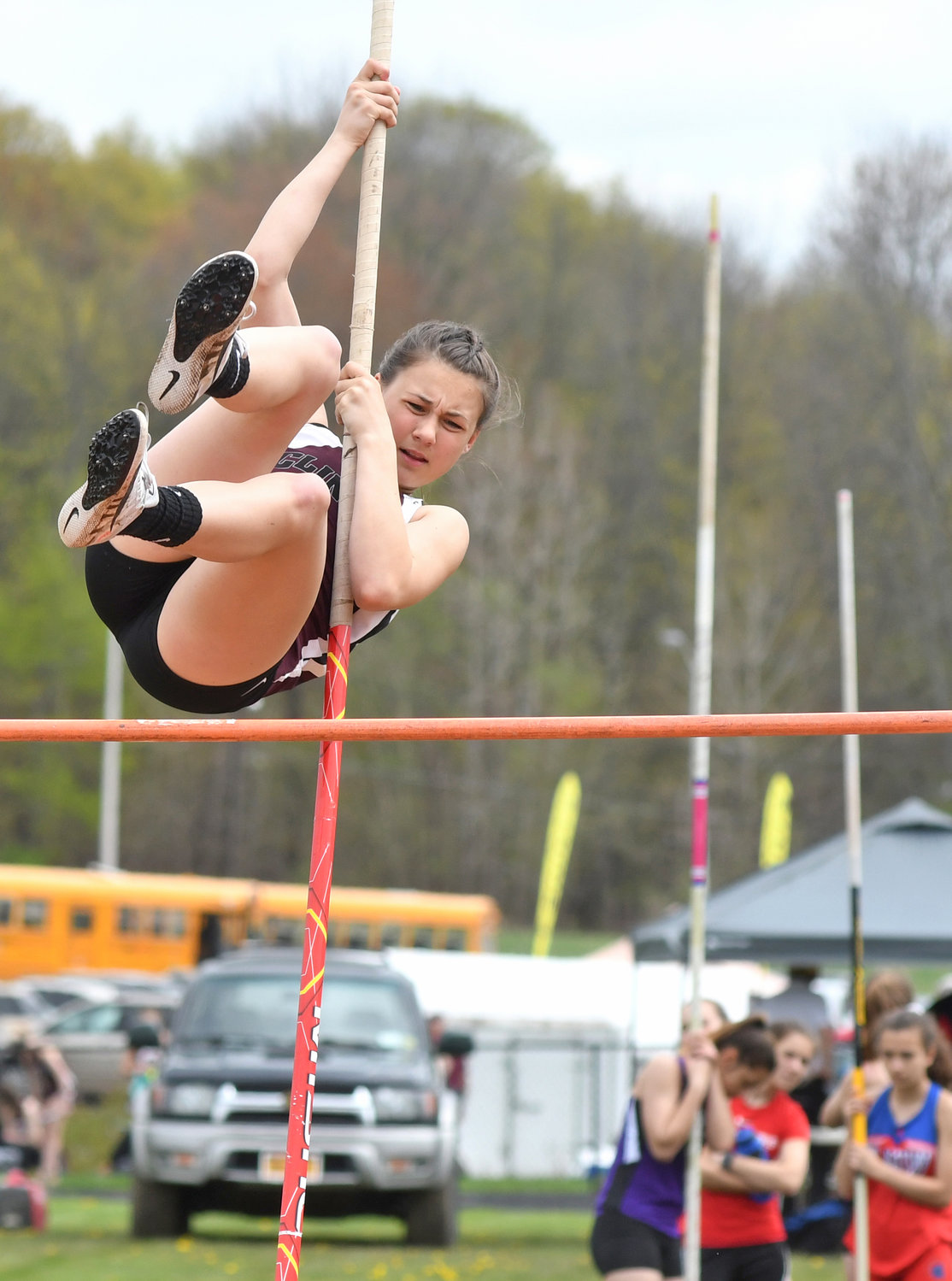 Clinton’s Claire Barone, shown in 2019 during an event, recently set the school record with a mark of 10 feet, five inches. She plans to participate in the pole vault along with lacrosse in college.
(Setninel file photo by John Clifford)
Ben Birnell
Sports writer
email / twitter

CLINTON — Claire Barone, a Clinton senior, is having a standout spring in two sports.

Most notably, Barone broke the Clinton program record in the pole vault at the fifth annual Ed Wadas co-ed invitational last Friday at Whitesboro. In an attempt that featured its own twists and turns before it even happened, she eventually vaulted to a mark of 10 feet, five inches.

The previous record of 10 feet, four inches was set by Hannah Shankman in 2014.

As a lacrosse player, she’s having a standout season with Clinton, totaling 19 goals and four assists. She also has nine ground balls. In her Clinton career, she has 38 goals and 15 assists.

Barone is set to play the sport in college in addition to planning to participating in the pole vault.

What was going through your mind on the attempt where you reached the record in the pole vault?

“Well, before my attempts that day, it was chaos. Because we couldn’t find my pole,” she said.

Where was it? Originally, she thought she mistakenly left it at Utica’s Thomas R. Proctor High School a week earlier. She started to drive to Proctor to look before coach Andrew Willis called her about a mile from the school to tell her it was found.

The jump itself “was probably one of the worst jumps of my life, honestly. I forgot to turn. I just prayed I went over, I guess. Then, I landed on my stomach. You’re supposed to land on your back. I turned around and I was expecting the bar to fall on me,” she said.

She said she ran over to friend and New Hartford High School graduate Riley Brennen, who was watching her at the meet and hugged her.

There are a few elements involved with the pole vault. How much work has gone in to help you with that event?

There’s a tremendous amount of work, she said. She started participating as a freshman because coaches wanted her to do the high jump. She was “fascinated” by the pole vault.

She had one practice before she participated in a meet. Her marks were 6-foot, 6 inches and seven feet, she said.

That’s funny to her because the starting height now is five feet and she can reach that on the high jump, she said.

When the COVID-19 pandemic started, she was able to practice because one of her coaches, Sam Catterson, has a pole vault runway in his backyard, she said.

You’re also playing lacrosse. What do you like most about playing the sport?

“I’m very excited to go to the next level to play lacrosse. I feel like I’ve done everything I can do (with Clinton). I love playing with my team. They helped get to where I’m going to go.”

COVID altered her sophomore and junior seasons, which put a damper on recruiting.

“I didn’t have a season for either of those, really. I was going to all these random camps on Long Island and in Maryland and St. Bonaventure just to get film to send to colleges.”

What are your college plans?

She’s going to Albright College, which is a Division III school in in Reading, Pennsylvania.

What drew her to the school? Coincidences, she said. The name of the school’s library is the same as her grandma’s maiden name. The lacrosse coach, Jen Willis, previously coached for then-Utica College.

And, the roommate she will have at Albright has the same downhill skis.

“I’ve never met anyone who has the same skis as me,” she said.

Is there an athlete that you look up to? What stands out about them?

“I don’t have cable, so I can’t really watch anyone. I just look up to people not so much in my sports, but athletes in general who have good morals and energy. I love watching those clips when athletes get excited for other people and not just for themselves.”