Thanks to the efforts of three dedicated firefighters, the “hidden little gem” that is the Clinton Fire Department Museum will soon be open to the public to show off old fire trucks,. 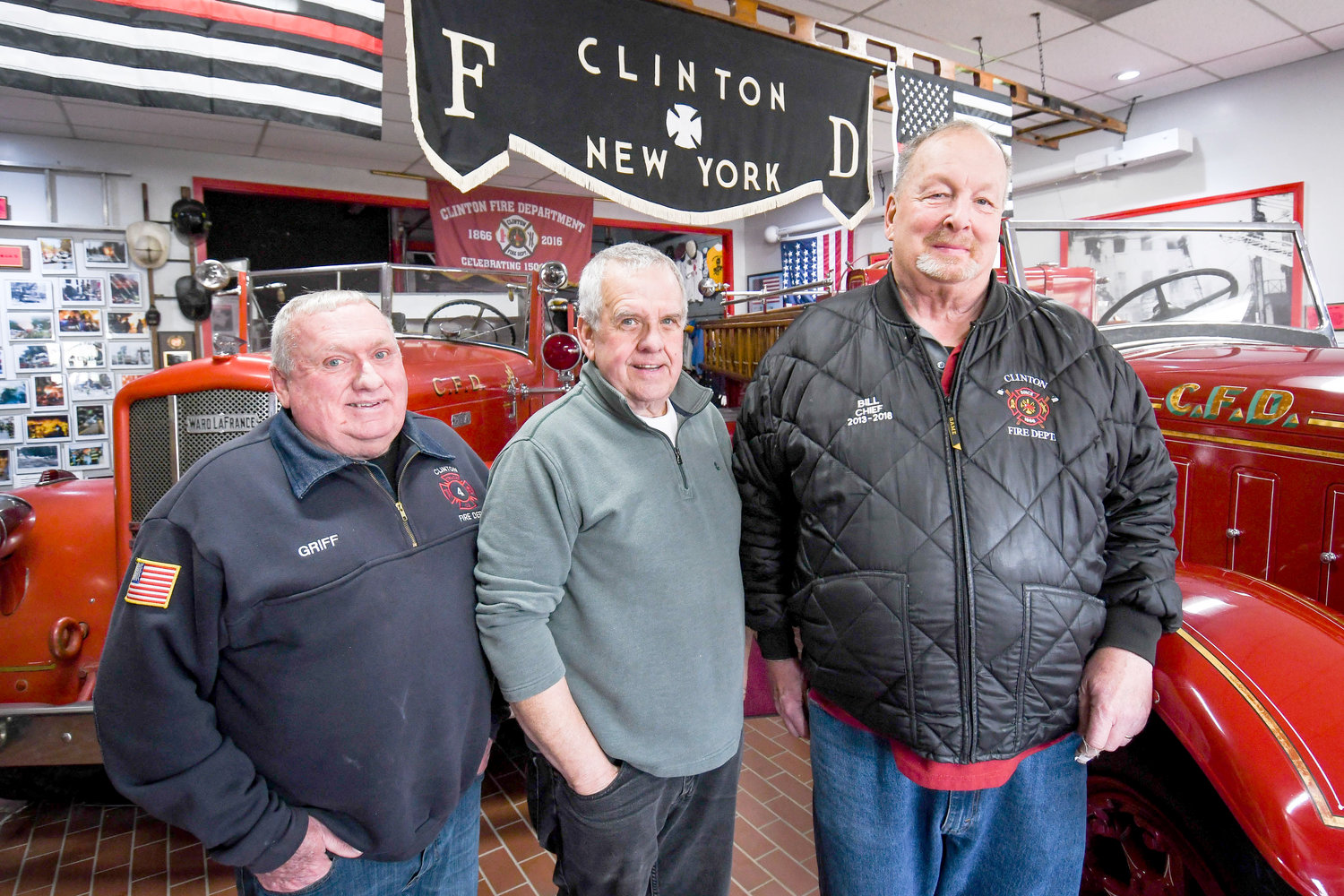 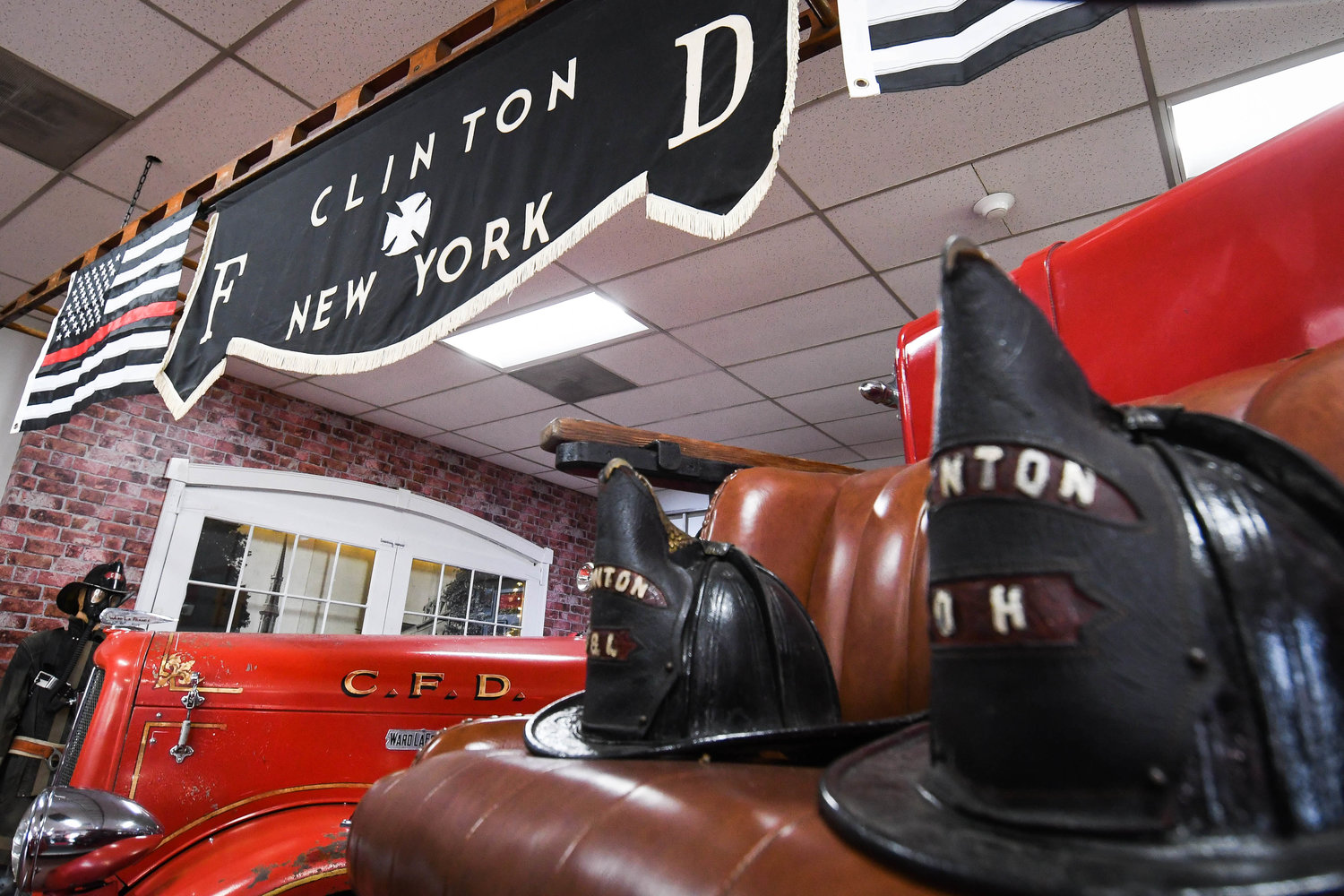 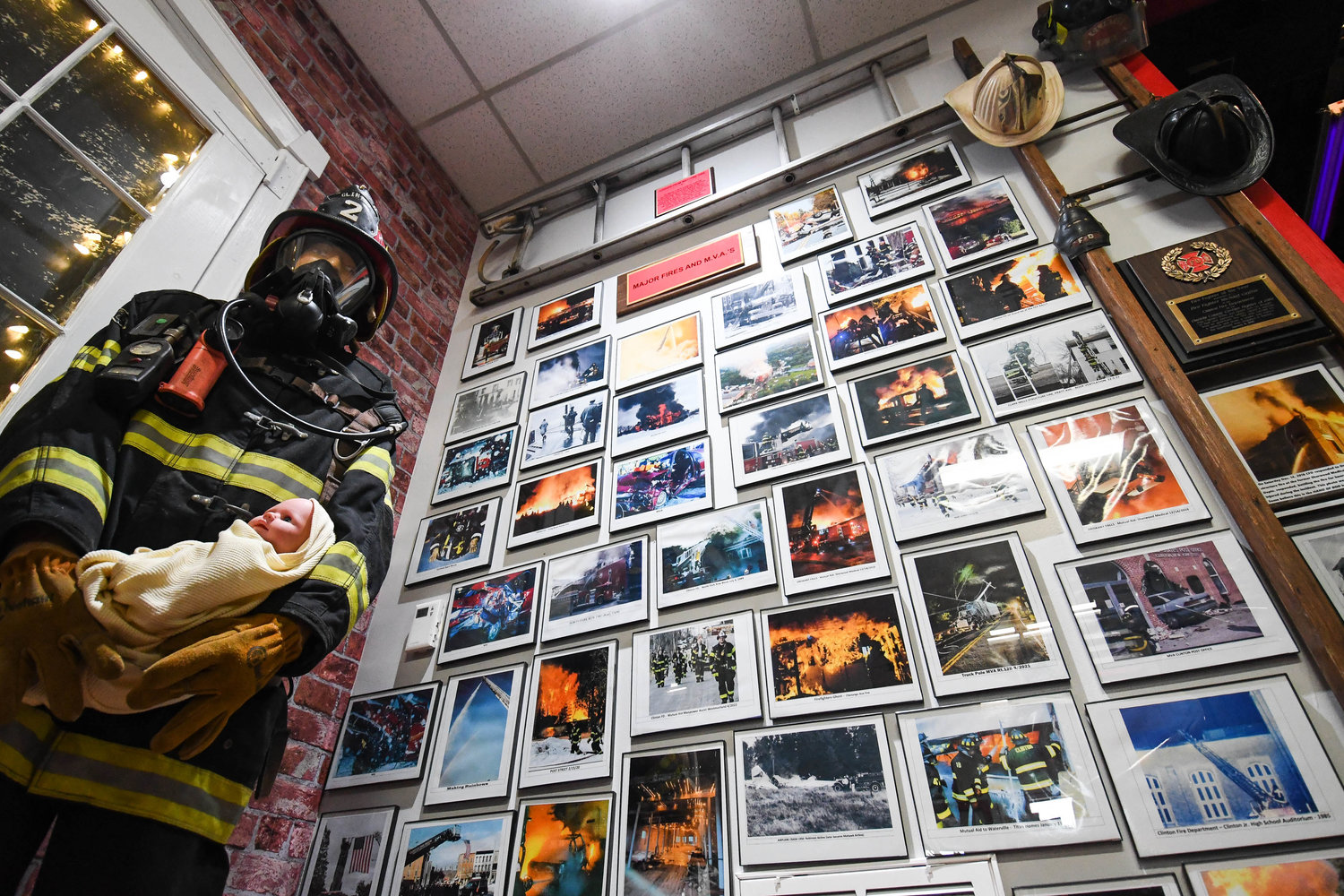 A wall of old photographs showcasing historic fires in the Village of Clinton.
(Sentinel photo by Alex Cooper) 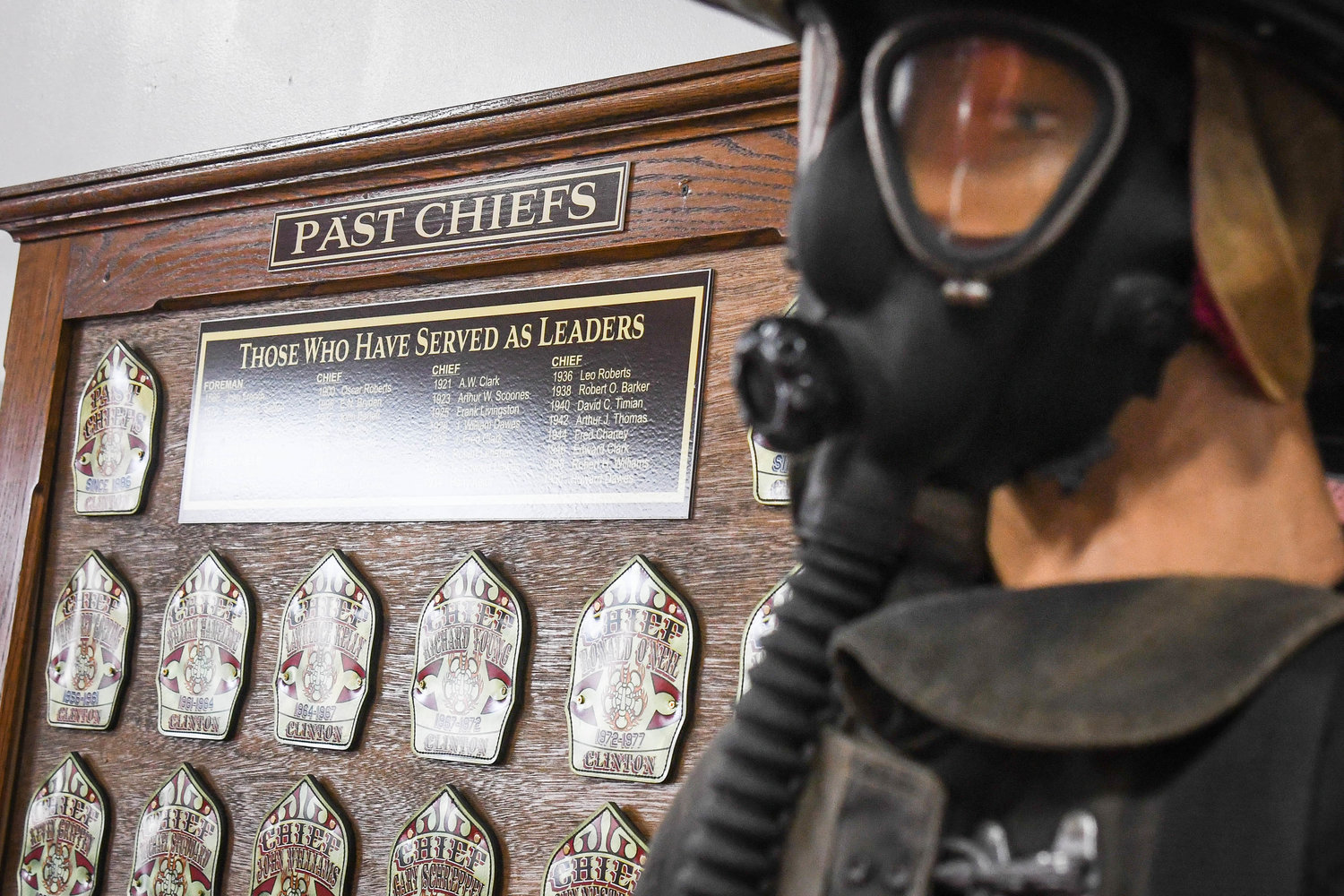 A plaque showcasing the past fire chiefs from Clinton's more than 150 years of service.
(Sentinel photo by Alex Cooper) 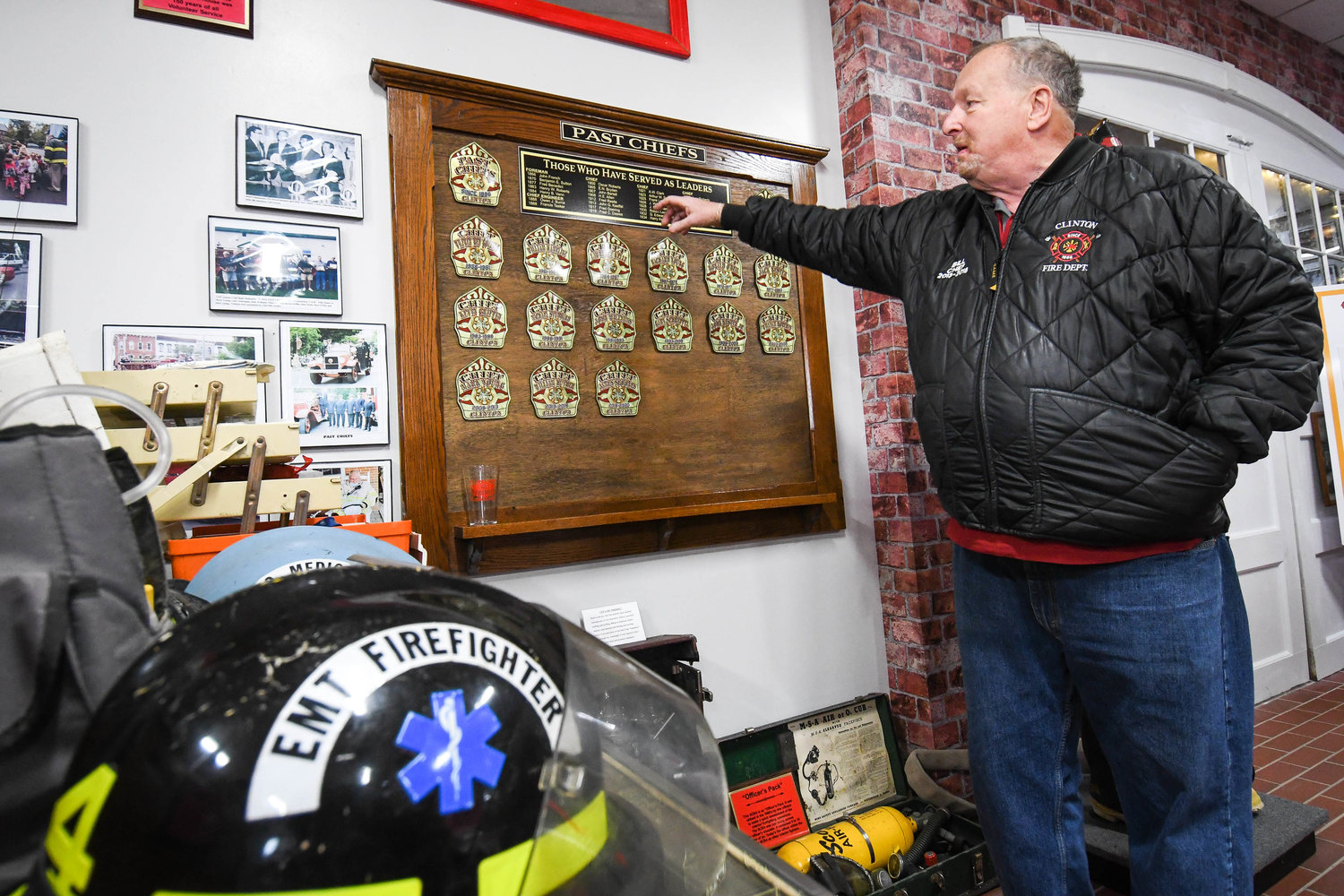 Former fire chief Bill Huther shows a board of past chiefs in the Clinton Fire Department Museum on Franklin Avenue in Clinton. The line of chiefs dates back more than 150 years.
(Sentinel photo by Alex Cooper) 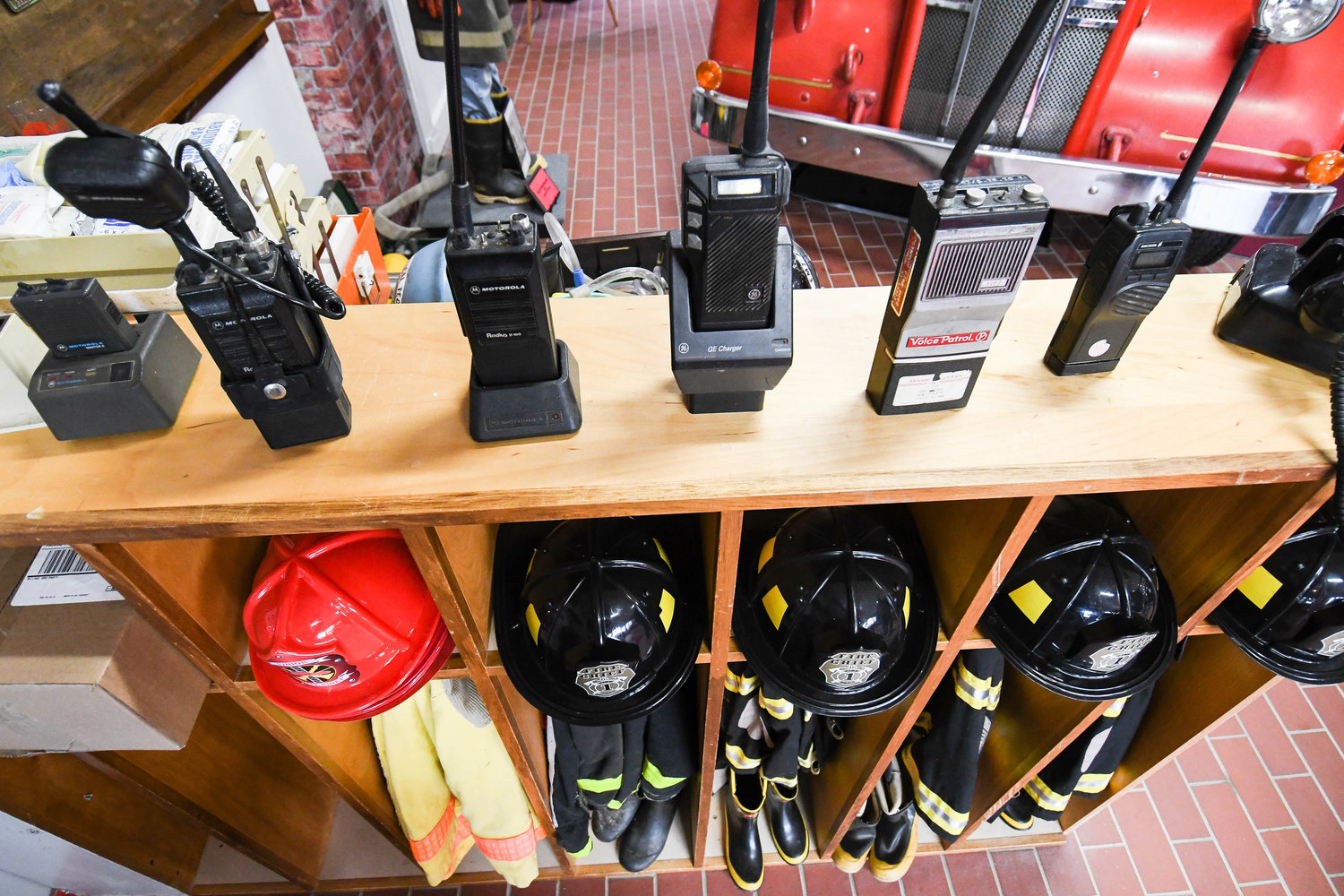 Children are able to dress up in firefighter equipment while visiting the Clinton Fire Department Museum. The children's corner also features a jump seat taken from an old fire truck, as well as an interactive set of lights and siren.
(Sentinel photo by Alex Cooper)
Previous Next
Posted Friday, November 25, 2022 6:41 am
Sean I. Mills
Staff writer
email / twitter

CLINTON — Thanks to the efforts of three dedicated firefighters, the “hidden little gem” that is the Clinton Fire Department Museum will soon be open to the public to show off old fire trucks, equipment, and more from over 150 years of history.

Located at the reserve firehouse at 55 Franklin Ave., the history museum will have its first official open house from 2 to 4 p.m. tomorrow (Saturday). A second open house will take place on Saturday, Dec. 10. Attendance is free, and the public is encouraged to attend.

“If you’re coming to Clinton, this is something to see,” said former Clinton Fire Chief Bill Huther, one of three officers who helped put the latest museum remodel into service.

“There’s still a little bit of work to be done on it, but we’re pretty happy with the way it turned out.”

The museum features old and new firefighting gear, historical photographs of large fires from the village, patches, plaques, and memorials from past firefighters, and so much more. There are two classic fire trucks in the museum itself: a 1934 Buffalo Engine and a 1950 Ward LaFrance, both of which were used by the Clinton Fire Department in decades past.

“People often ask, why do we have all this stuff? And how do we amass all this stuff?” Huther joked. “I think our fire department was the original hoarder. They just never threw anything away.”

The museum also has an 1876 button hand pump, the second piece of apparatus the department ever bought. The pump was pulled by firefighters around the village, and was used until 1915. The hand pump was restored in 1984 by Clinton volunteers.

“When I was a kid, I remember this thing was all black and kind of beat up. This was actually lovingly restored by our own members,” Huther said of the button hand pump.

He said firefighters used cotton balls and acetone to wipe away decades of muck without ruining the wood finish underneath.

The Clinton Fire Department was founded in 1866, in the wake of a major fire in the village in 1862. The first volunteers were mostly former Civil War soldiers. The museum has pictures dating back from the late 1800s to today, showing off old equipment and how the fire department and firefighters used to look back in the day.

There’s also a kids corner, complete with firefighter costumes, lights and siren for the children.

The museum itself was first built in the 1980s, when an addition was put on the reserve fire station on Franklin Avenue. A few years ago, Huther said the department needed to make more room in the truck bays and couldn’t justify keeping some of their old apparatus. So Huther, former chief Kevin Griffin and past president Paul Riley decided to knock down some walls to squeeze the antique trucks into the original museum space.

The three men continued working through the COVID quarantine to turn all of the extra room into a bigger, better museum, with plenty of help from the Clinton fire community. It unofficially opened a year ago, with visitors mostly coming through word of mouth.

With the two upcoming open houses, Huther said they’re hoping to turn their “hidden little gem” into a village staple.