Starting today, a complete streets concept will be implemented on Genesee Street for a 90-day trial. 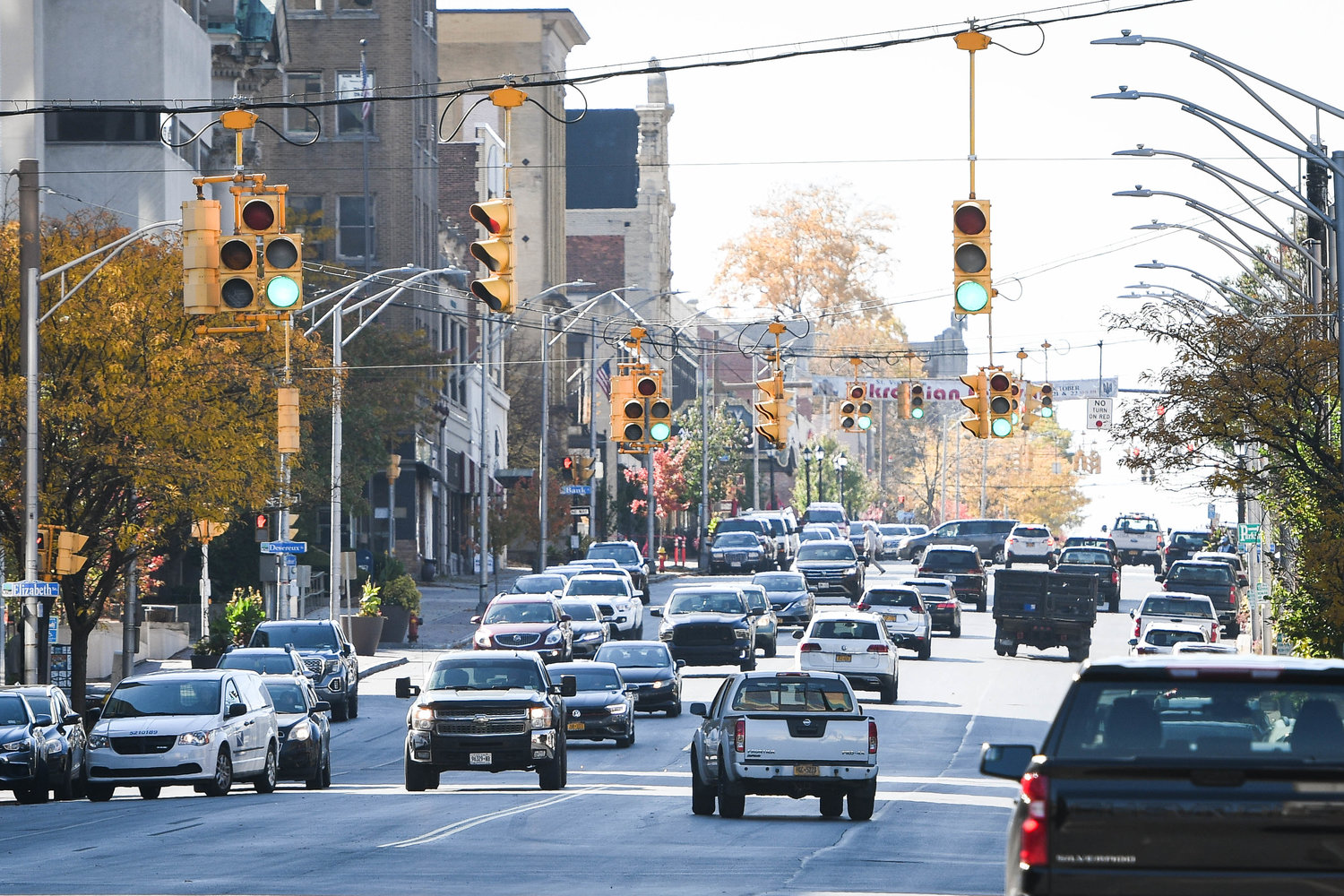 Traffic makes its way down Genesee Street on Friday, Oct. 21 in Utica. On Saturday, Genesee Street, from Oriskany Street to Cottage Place, will decrease from four lanes to three. The street will be comprised of one northbound lane, one southbound lane and a turning lane in the middle.
(Sentinel photo by Alex Cooper)
Posted Saturday, October 22, 2022 6:30 am
Thomas Caputo
Staff writer
email

UTICA — Starting today, a complete streets concept will be implemented on Genesee Street for a 90-day trial.

Genesee Street, from Oriskany Street to Cottage Place, will decrease from four lanes to three. The street will be comprised of one northbound lane, one southbound lane and a turning lane in the middle. The middle lane will also have designated delivery zones for delivery vehicles to park in.

On-street parking in both the northbound and southbound lanes will remain while bike lanes will also be added on both sides to accommodate cyclists.

According to the U.S. Department of Transportation, the complete streets concept is "designed and operated to enable safe use and support mobility for all users" with a goal to "make the transportation network safer and more efficient."

On Wednesday, the Utica Common Council voted on legislation brought by councilors Katie Aiello, Celeste Friend and Frank Meola to implement the complete streets concept for Genesee Street for a 90-day trial. Officials with the city of Utica have previously engaged in discussions regarding changes to Genesee Street for years, however, no major changes have come as a result.

With five councilors voting in favor, the legislation passed by a majority vote.

Aiello has been a staunch advocate for implementing complete streets and believes the changes to Genesee Street will be able to increase a pedestrian presence downtown and accommodate people with disabilities throughout the city, all while keeping traffic steady.

Responses to the trial from other business owners along Genesee Street have been mixed.

During the Utica Common Council meeting, Aiello said she has been in touch with business owners along Genesee Street who support the trial, however, some business owners like Nancy Ford of Nancy L. Ford Photography in Franklin Square, right off Genesee Street, believes that the buildup of traffic will be inevitable by eliminating lanes and that the trial should have taken place a year after the Nexus Center and the Wynn Hospital have arrived.

"All of these changes are just going to be a stress on small business," she added.

In a letter addressed to Aiello and the council a day after the council meeting, Linda Iannone, booking and events director for the Stanley Theatre, expressed her concerns with how the theatre and nearby businesses would be able to operate under the trial.

"I am concerned as to how this will affect the theatre and our surrounding neighbors," Iannone said. "Parking is already at a premium and you are taking away valuable real estate at the expense of the businesses, not only the theatre, but the surrounding restaurants that provide a valuable economic impact to the city."

In the letter obtained by the Daily Sentinel, Iannone invited Aiello and the council to witness the tour of the musical "Tootsie" load into the theatre on Tuesday, Nov. 1, as Iannone stated that tractor trailers loading into the theatre require four lanes due to their size.

Iannone believes that reducing the lanes could potentially harm the theatre's business of accommodating tours and private events.

"It is unreasonable to expect several tractor trailers for Broadway shows to unload in the middle of Genesee Street," Iannone added. "They carry hundreds of thousands of dollars worth of equipment, cases, set pieces, etc. They need full access to the dock."

With Jan. 20 being the 90-day mark, the council intends to review the effects and opinions of the complete street concept and make a decision on whether or not to make the changes permanent for Genesee Street.