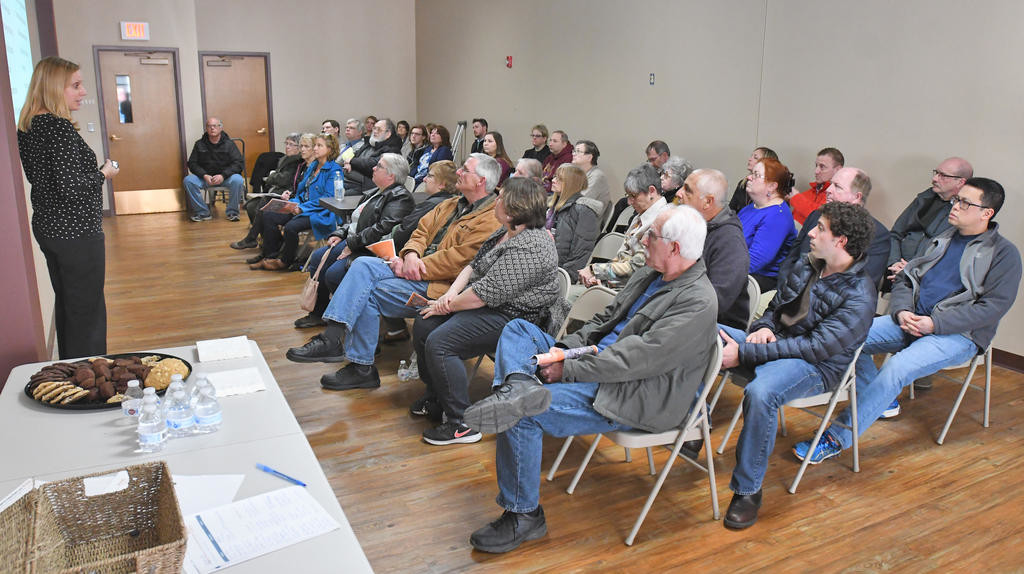 READY TO SUBMIT — Kimberly Baptiste, left, of Bergmann Associates presents the final details of the city’s Strategic Investment Plan to the public Thursday. The city will submit that plan to the state for approval of which projects to fund and how much each will get out of the $10 million in Downtown Revitalization Initiative the state has awarded Rome. (Sentinel photo by John Clifford)
Posted Friday, March 23, 2018 4:00 pm

The city presented the proposal it will submit to the state to the public Thursday for how to split up the $10 million Downtown Revitalization Initiative funds it will receive. There were no significant changes compared to February’s revised plan.

A public information meeting was then held. Both were overseen by project consultant Bergmann Associates.

The Strategic Investment Plan defines prioritized projects to be submitted to New York State for approval and funding. It also outlines the target area for the projects and funds.

The city must submit its Strategic Investment Plan for state approval by March 29.

The state will cull the list by either removing projects or reducing the amount of money to be contributed to certain projects so that the final number equals the $10 million commitment.

Here are details for the final dozen projects, broken down by how much DRI funding would be earmarked for each:

“We’re going to have construction going on here for the next 24 months,” said Izzo of the pace
once the projects get approved.

Two of the most talked about projects at the public meeting were the bus stop and the future of the Liberty-George parking garage site.

One resident of Georgian Arms apartments across George Street from the parking garage asked that the surface level parking by the long-term use for the site rather than just temporary. She noted that residents who no longer can park at the garage must park at the nearby Madison Plaza apartments and walk home.

Criticisms of the Centro bus stop were varied: the narrowed street, visibility in and out of the parking lot around the shelter, lack of heat and bathrooms at the facility, snow removal on site.