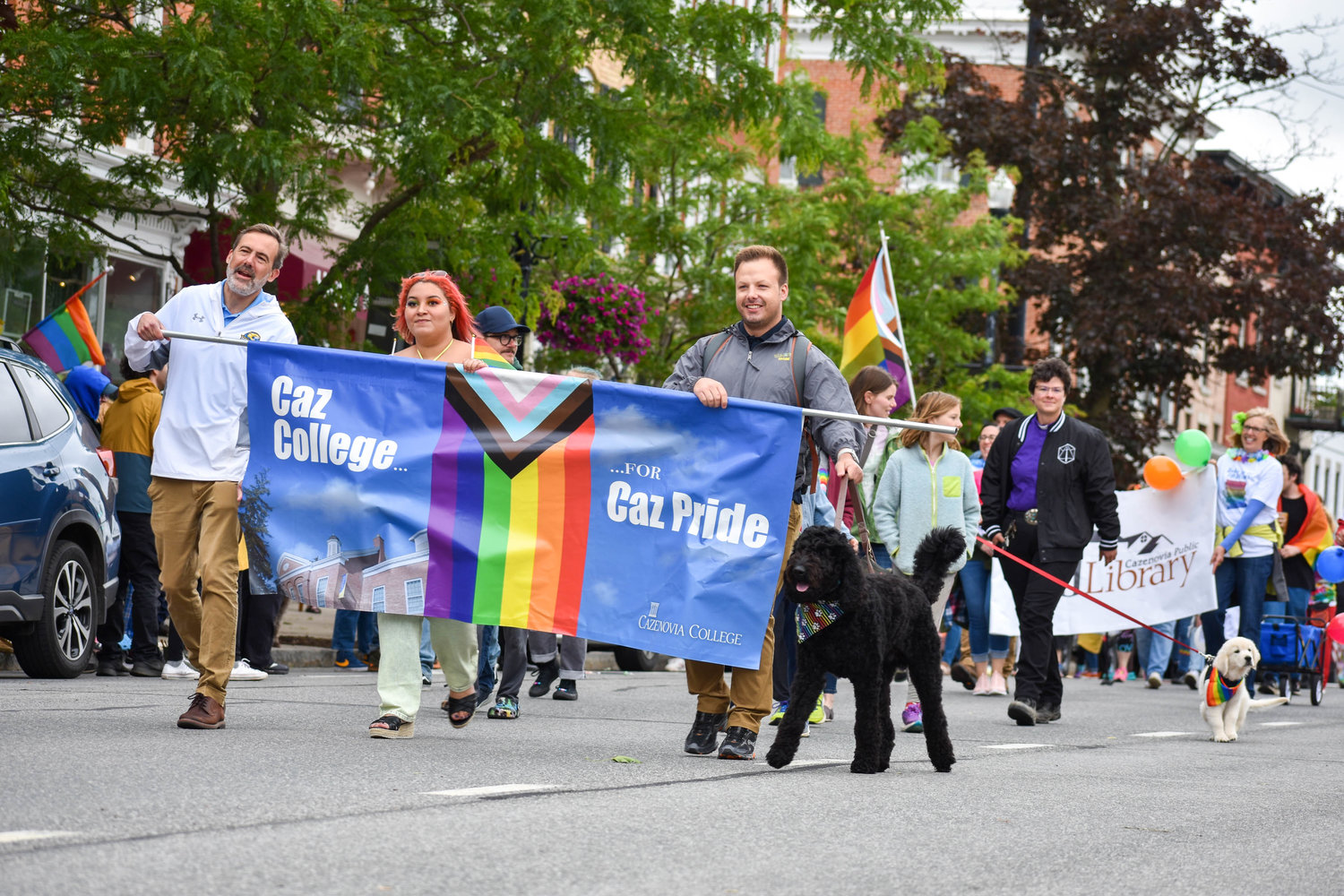 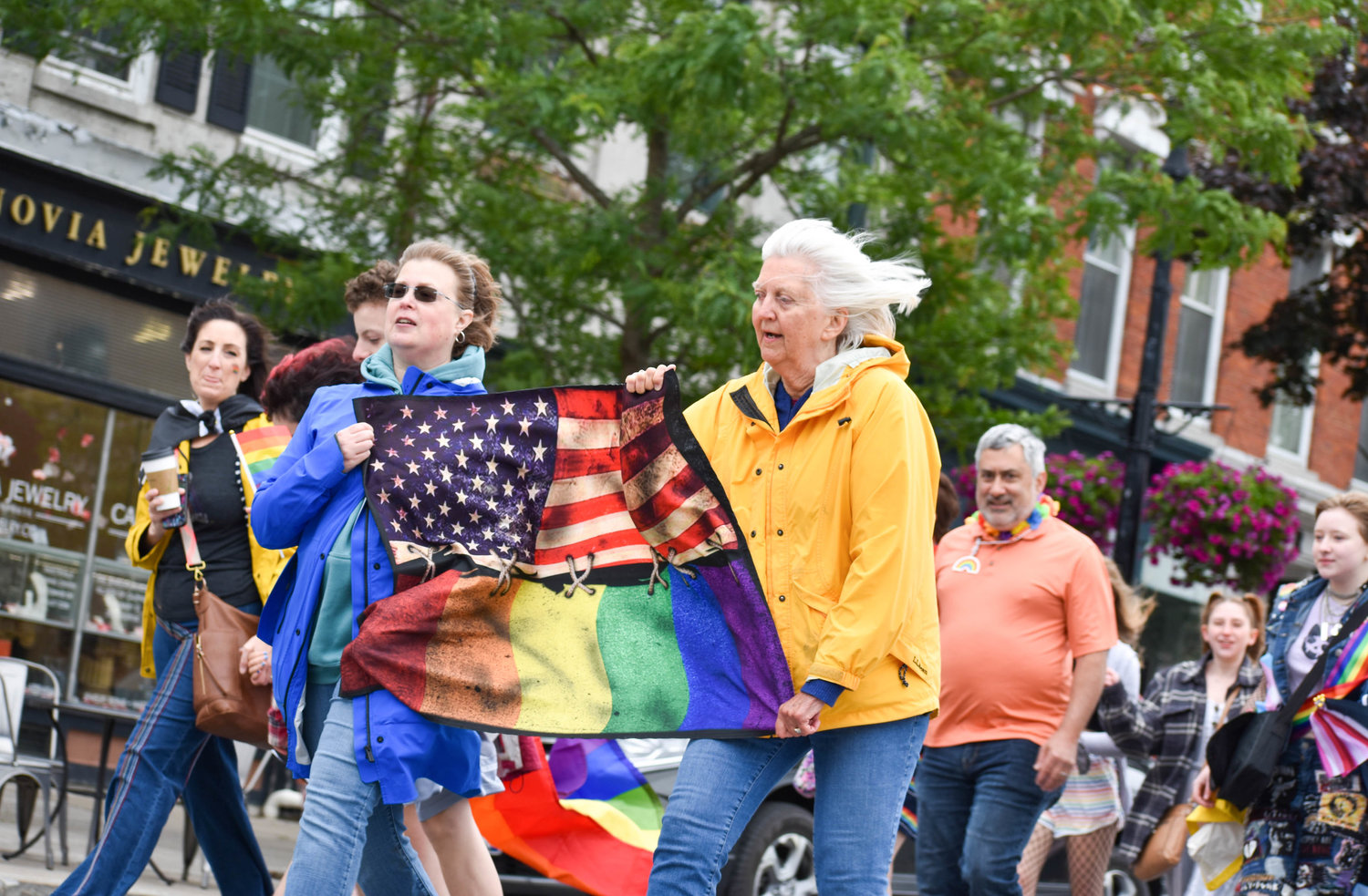 Pride flags and their variations were waved proudly as parade-goers marched down Albany Street in Cazenovia on Saturday, June 18.
(Sentinel photo by Carly Stone) 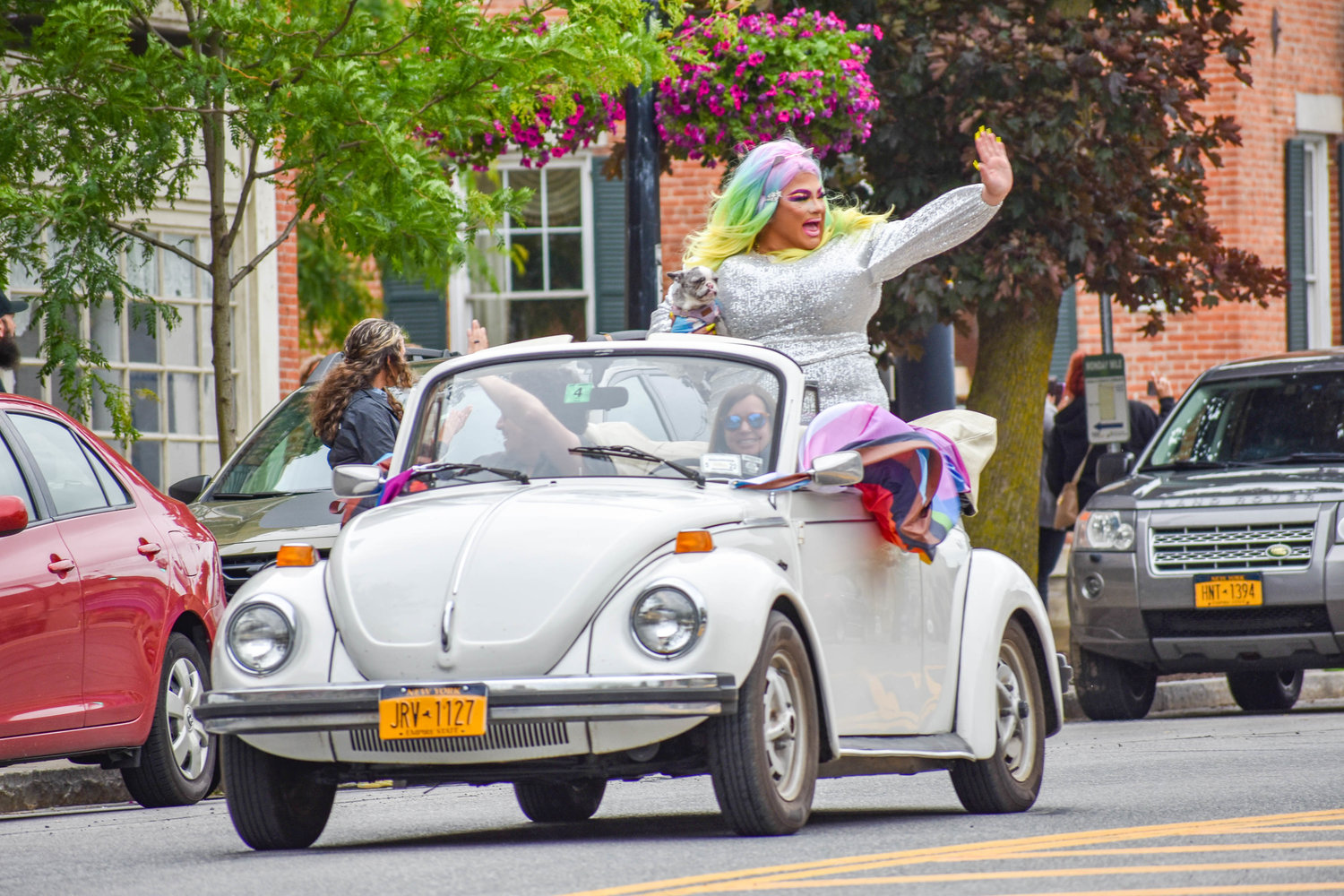 CAZENOVIA — Rainbows filled the streets this past weekend to mark the village’s 2nd annual Pride Fest, hosted by the Caz Pride Committee. The festivities were kicked off with the occasion’s first ever pride parade on Saturday.

Several pride attendants — a number of them younger in age — came out to show their support and be themselves. Various LGBTQ flags were waved proudly and their colors adorned many pride-goers' cheeks. Despite chilly temperatures and mists of rain, a certain sort of sunshine was emanating from the crowd.

“We’re just celebrating love and joy,” reflected Travis Barr, a member of the LGBTQ community, Caz native, and local business owner leading the effort to organize Caz Pride. What’s more, Barr said, is there wasn’t just one type of person in attendance; there were all sorts of backgrounds, ages, and identities present, he reflected, which meant a lot for this celebration of togetherness and inclusivity.

“What we’ve been through with the last few years with COVID and politics and feeling divided, and feeling like we’ve lost that sense of being able to communicate and being OK with not agreeing but still supporting one another and loving one another, it’s so nice to have Caz Pride be that thing that brings us together,” Barr remarked.

In its second-year run, Caz Pride Fest took off in terms of community engagement, Barr shared. “Last year was great. Attendance exceeded our expectations. As we were planning this year, things sort of just snowballed with certain businesses that I consider true allies really stepped up to the plate in asking to be a part [of it].”

Meier's Creek Brewing Company hosted Drag Bingo — MC'ed by Anita Buffem, a longstanding persona of Barr’s — and the Pewter Spoon Cafe and Loka Leaf Tea Lounge hosted a family brunch, to name a few of the local establishments that offered up their space and resources for the Caz Pride Committee’s events throughout the week.

After the parade, attendants gathered at Lakeland Park to enjoy food trucks and visit different vendors, many of which were LGBTQ support organizations. The Haven at Skanda, a non-profit farm sanctuary in Cazenovia, sought feedback for hosting a potential LGBTQ youth support group for grades 5-7. Other organizations providing resources were Sage Upstate, which offers programs and outreach to counter isolation and improve health for older LGBTQ people, and the YMCA of Central New York, which hosts online creative writing workshops for LGBTQ and gender-nonconformting students and peer supporters.

The Amy Bradstreet Ally Award was presented to Casey Frazee for her positive contributions in the community and her role in creating change through action and love.

Fun as the day was, Caz Pride is about more than having a good time, according to event organizers. “For us, Caz Pride is not only to create visibility for the LGBTQ community, but really our core mission is to let the youth know that they’re important and that they’re valid, their experience is valid, and that there’s a place for them. And above and beyond that, to bring everyone together,” Barr shared. “It was so amazing to get so much feedback from kids and families that were very emotional about how much it was needed.”

In the village, many young people face unacceptance from their families due to their identity or sexual orientation, Barr said, and some of these situations have even resulted in homelessness. Barr said giving everyone a safe space is important, and for many, Caz Pride was one of them.

Other fun events like a Prom “do-over” and film festival could be on the horizon along with a pride-flag raising ceremony, as the Caz Pride Committee looks toward the future. The organization is also in the beginning stages of becoming an official nonprofit, Barr shared.

The Prom “do-over” is for “people like me who didn’t get to go to prom with their significant other because it didn’t feel comfortable” and “kids who maybe don’t feel comfortable today going to their prom,” Barr explained. “We have a lot on the vision board and so we’re excited to get into more fundraising to do that.”

Anyone interested in joining the Caz Pride Committee can contact cazenoviapride@gmail.com. Barr is the committee’s only LGBTQ member, but hopefully that can change as the group expands, he said.