Cazenovia College dedicated the property at 9 Sullivan St. which was recently donated to the college by the Christakos Family, with a formal ceremony on Friday, Sept. 23. 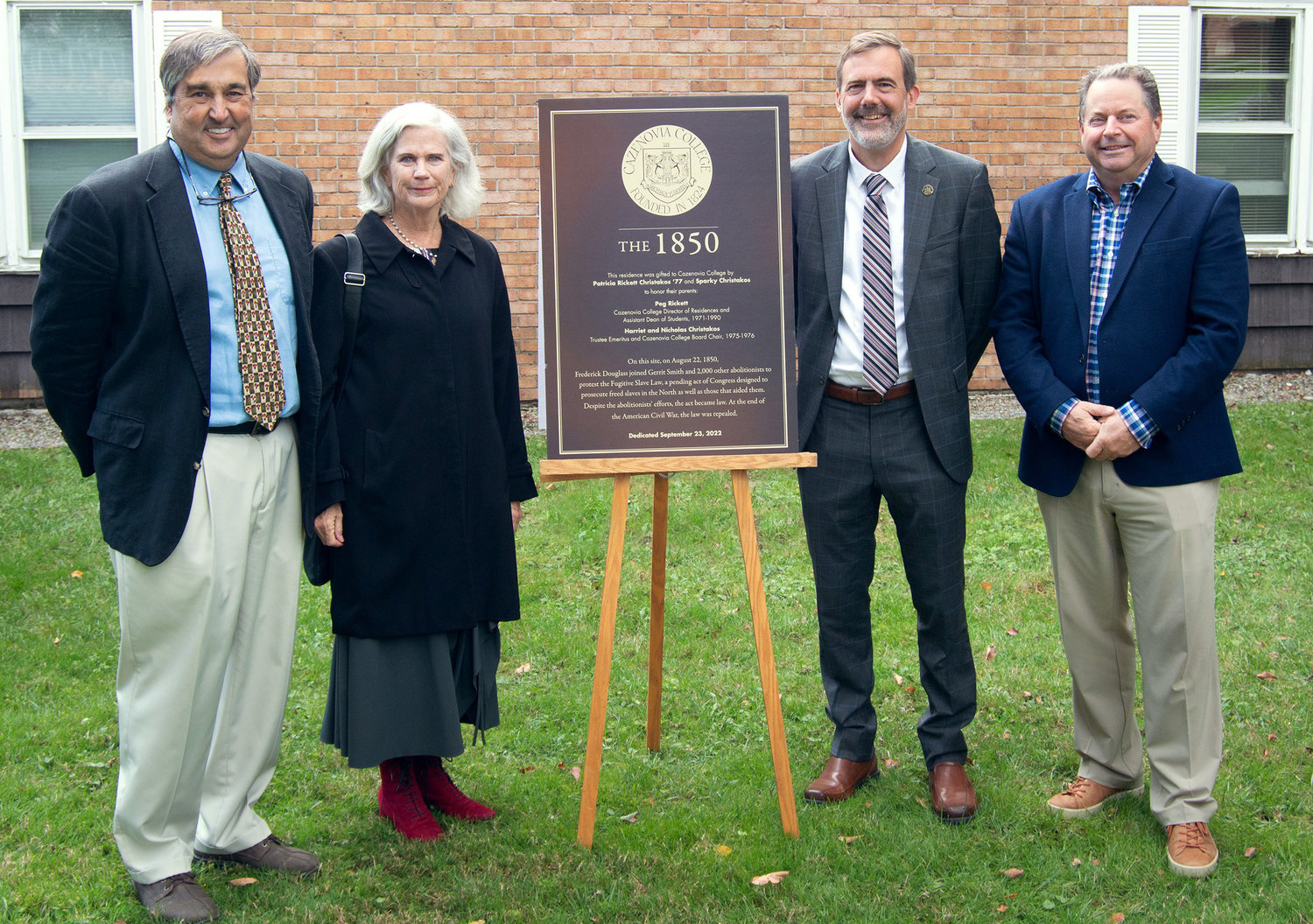 Cazenovia College dedicated the property at 9 Sullivan St. which was recently donated to the college by the Christakos Family, with a formal ceremony on Friday, Sept. 23. From left: Sparky and Patricia Ricket Christakos, donors of the property; David Bergh, Cazenovia College president; and Kenneth C. Gardiner, chairman of the college’s board of trustees.
(Photo submitted)
Posted Friday, September 30, 2022 12:50 pm

CAZENOVIA — Cazenovia College dedicated the property at 9 Sullivan St. which was recently donated to the college by the Christakos Family, with a formal ceremony on Friday, Sept. 23.

The College unveiled the naming of the site as “The 1850,” in recognition of the history of the site where over 2,000 abolitionists gathered in 1850. The property is one of the largest individual gifts the college has received.

The $1.8 million property includes one- and two-bedroom apartments. Prior to the donation, the college was renting the complex for student housing.

Patricia Ricket Christakos and Sparky Christakos donated the residence to honor their parents Peg Rickett, and Harriet and Nicholas Christakos. Peg Rickett served at Cazenovia College from 1971 through 1990 as the director of residences and assistant dean of students.

Harriet and Nicholas Christakos have supported the college for decades, with Nicholas serving as a trustee emeritus and board chair from 1975 to 1976.

Nine Sullivan Street is the historic site of the Cazenovia Fugitive Slave Law Convention of 1850. In August of 1850, Frederick Douglass joined Gerrit Smith and 2,000 other abolitionists to protest and plan resistance to the Fugitive Slave Law, a pending act of Congress designed to prosecute freed slaves in the North as well as those that aided them.

Despite the abolitionists’ efforts, the act became law, although it was repealed at the end of the American Civil War. The convention brought so many people to the village that the only place that could hold them was Grace Wilson’s apple orchard on Sullivan Street, now the site of apartments.

A formerly enslaved man, Frederick Douglass was a prominent activist, author and public speaker. Born in Utica, Gerrit Smith was an American reformer who provided financial backing for antislavery crusades. Smith and Douglass were drawn together by their shared commitment to ending slavery and guaranteeing equal rights for all. They are considered two of the most influential and powerful abolitionists and were among the first five people inducted into the National Abolition Hall of Fame and Museum in Peterboro.

“This property impacts all of us and is so important to our community,” noted Sparky Christakos.

Patricia Christakos added, “Thank you for learning the history of this property and the history of our family. My mother would be so proud to be a part of this community today just as she was when she worked at Cazenovia College.”

A reception followed the dedication where Hugh Humphrey, a former Madison County judge and a founding member of the National Abolitionist Hall of Fame, joined via live stream to provide a brief history of the state of the country in 1850 and the significance of “The 1850” property.