UTICA — Ryan Schmelzer is preparing for the Utica Comets’ playoff series the best way he can. The Comets’ captain, who turned pro in 2018 and has played nearly 200 American Hockey League games, … 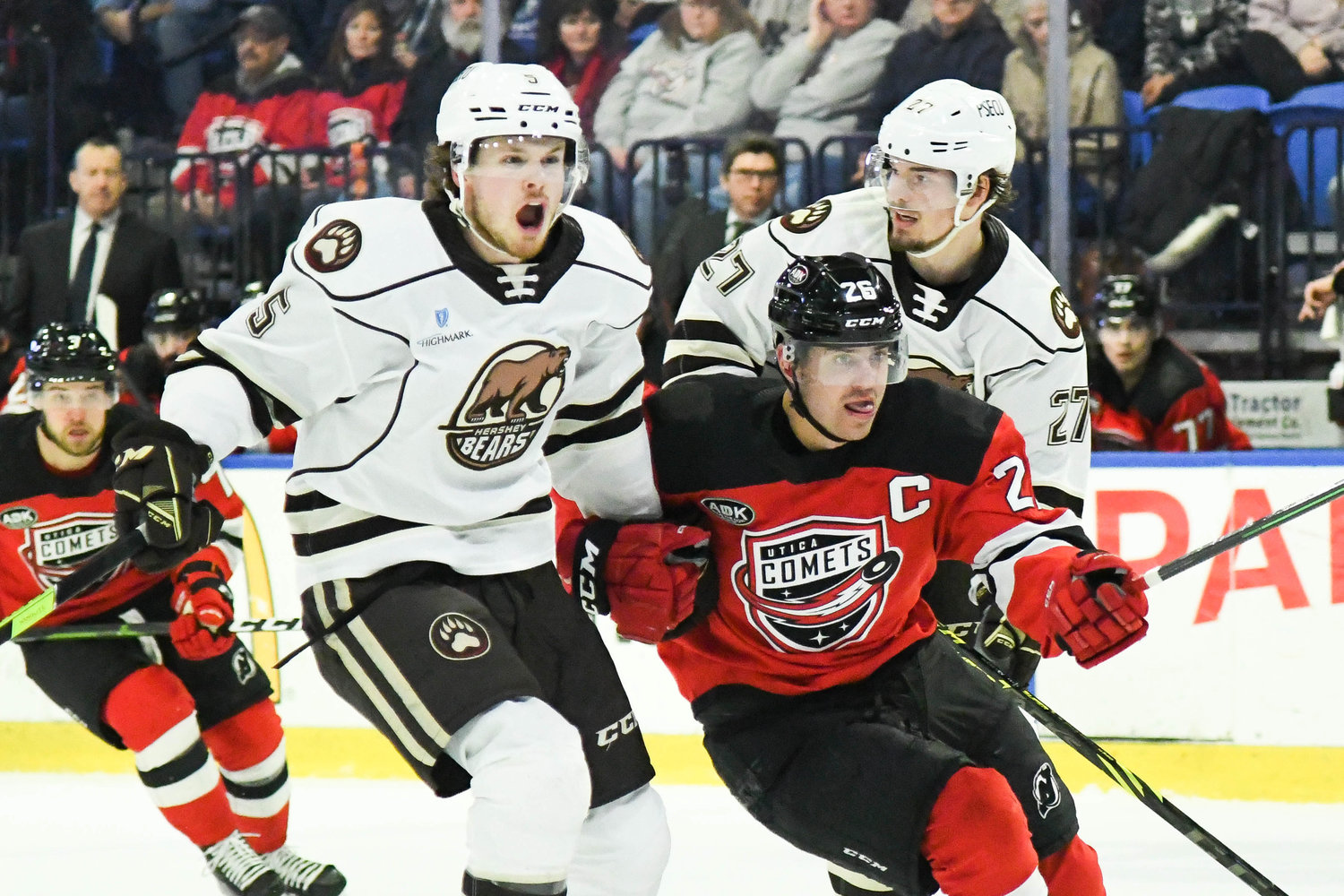 Utica Comets captain Ryan Schmelzer has been a key player for the team this season. He’s looking forward to his first postseason experience in the AHL.
(Sentinel photo by Alex Cooper)
Posted Friday, May 6, 2022 7:30 am
Ben Birnell
Sports writer
email / twitter

UTICA — Ryan Schmelzer is preparing for the Utica Comets’ playoff series the best way he can.

The Comets’ captain, who turned pro in 2018 and has played nearly 200 American Hockey League games, is getting his first Calder Cup playoff experience. So, this is a new experience for him and many on the roster.

With the Comets earning a bye into the North Division semifinals and more than a week off by virtue of their Eastern Conference-best 43-20-8-1 regular-season record, Schmelzer is trying to keep tabs on what’s going on in the playoffs.

The Comets are set to make a return to the playoffs – along with the whiteout atmosphere in Utica’s downtown arena – at 7 p.m. Tuesday when the team is scheduled to take on the winner of a best-of-three series between Rochester and Belleville. Rochester grabbed a Game 1 win in overtime Wednesday after trailing 3-0.

“You want to see if the playoff atmosphere changes anything,” said Schmelzer, who played 17 playoff games with ECHL Adirondack in 2018. “I know a couple other guys watched (Rochester and Belleville). Some didn’t. I think it is whatever gets you prepared in the best way. If you want to watch and see what they do and if that helps you, go ahead and do it. If you’re a guy that shows up and it doesn’t matter who we’re playing, you just play your game, that’s great, too. There’s a balance between both of them. For me personally, I like to see what’s going on.”

Getting a chance to play in the postseason is exciting and it is why you play the games, Schmelzer said. He’s among 20 Comets players who haven’t played any AHL playoffs games.

“It is going to be fun with the year that we’ve had this year and the expectations we’ve had throughout the year,” said Schmelzer, who earned the team honor for “Most Heart” this season. “We know what the fans are going to bring and we’re excited what that is going to be.”

He’s been a leader for the Comets as captain for Utica in the first year of the affiliation with the New Jersey Devils. He’s had career-bests in goals (18) and points (32) in 64 games.

“Schmelzy’s a guy that doesn’t (show) a lot of overall emotion. I think he’s got a demeanor that is a great reflection on our team. When things start getting hot and heavy in games and he speaks everyone listens. I think he meshes well with the other leaders in our locker room and carries a strong voice,” Comets coach Kevin Dineen said. “You can have all those things – those are all intangibles – but you have to back it up with your play. He’s done that from Day 1.”

Schmelzer said there has been a positive energy among the players as they ready for their playoff series.

“Everyone is in good spirits and good moods,” Schmelzer said. “Our mindset is that we’re ready and we want to get started. There’s nothing but good vibes.”

There were two updates regarding New Jersey prospects Thursday.

Forward Chase Stillman – who had been assigned to Utica recently after his juniors season ended – is not available for Utica’s’ first series, Dineen said. He has an undisclosed injury.

During his season-end news conference Thursday, Devils General Manager Tom Fitzgerald said 20-year-old defenseman Shakir Mukhamadullin has obtained his visa and is set to travel to the United States and join the Comets.

It is unclear when the 6-foot-4, mobile defenseman will join the Comets. It is also unclear if he will play any games as Utica has nine defensemen on the roster.

Among the players with Utica, forward Samuel Laberge participated in a non-contact jersey Thursday. Dineen said he’s made good progress and they’ll see how it goes with him.