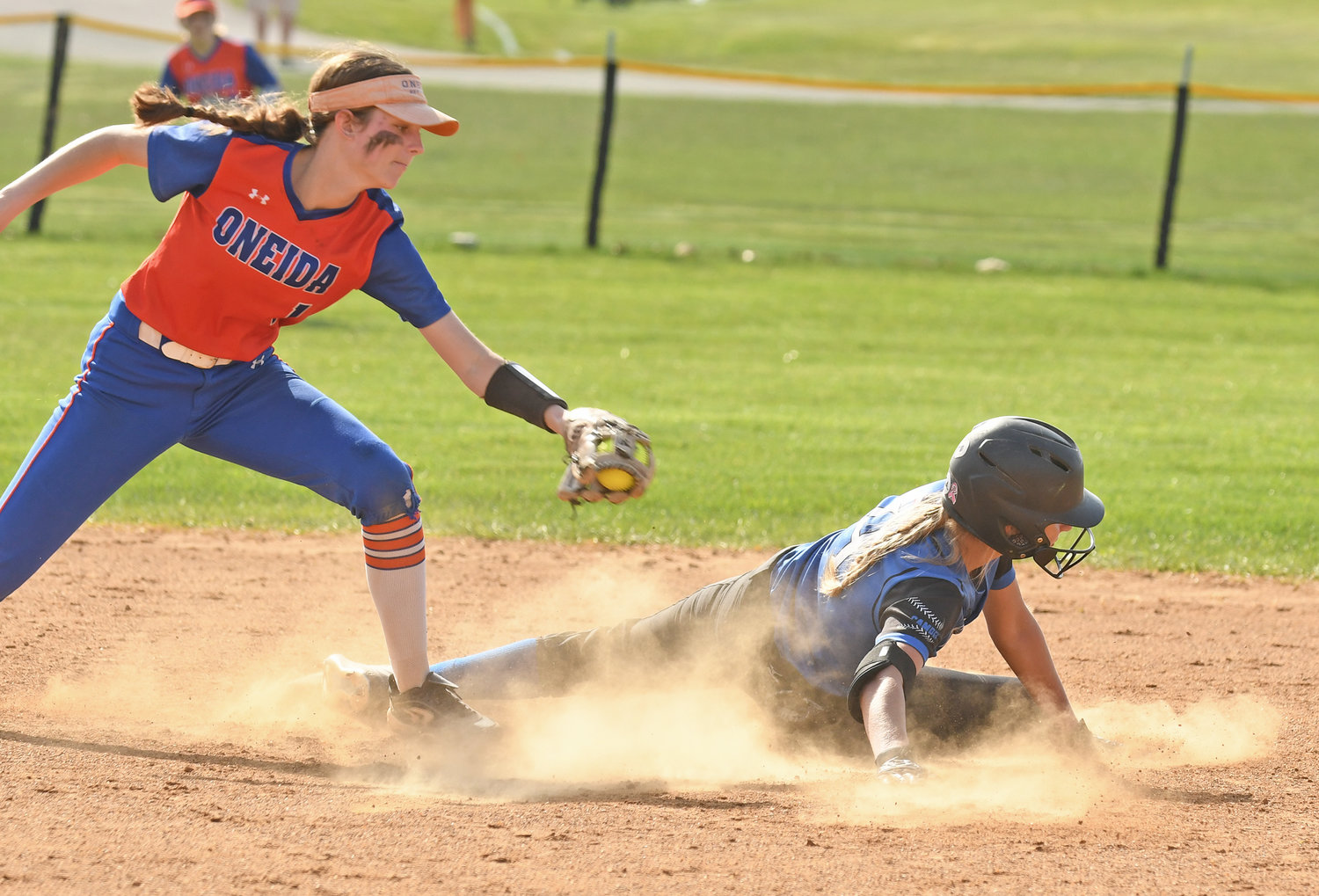 SAFE AT SECOND — Oneida shortstop Kaylin Curro reaches out but can’t quite get the tag on Camden baserunner Jadyn Prievo in the Tri-Valley League matchup at Oneida Monday. The Blue Devils won 9-6.
(Sentinel photo by John Clifford) 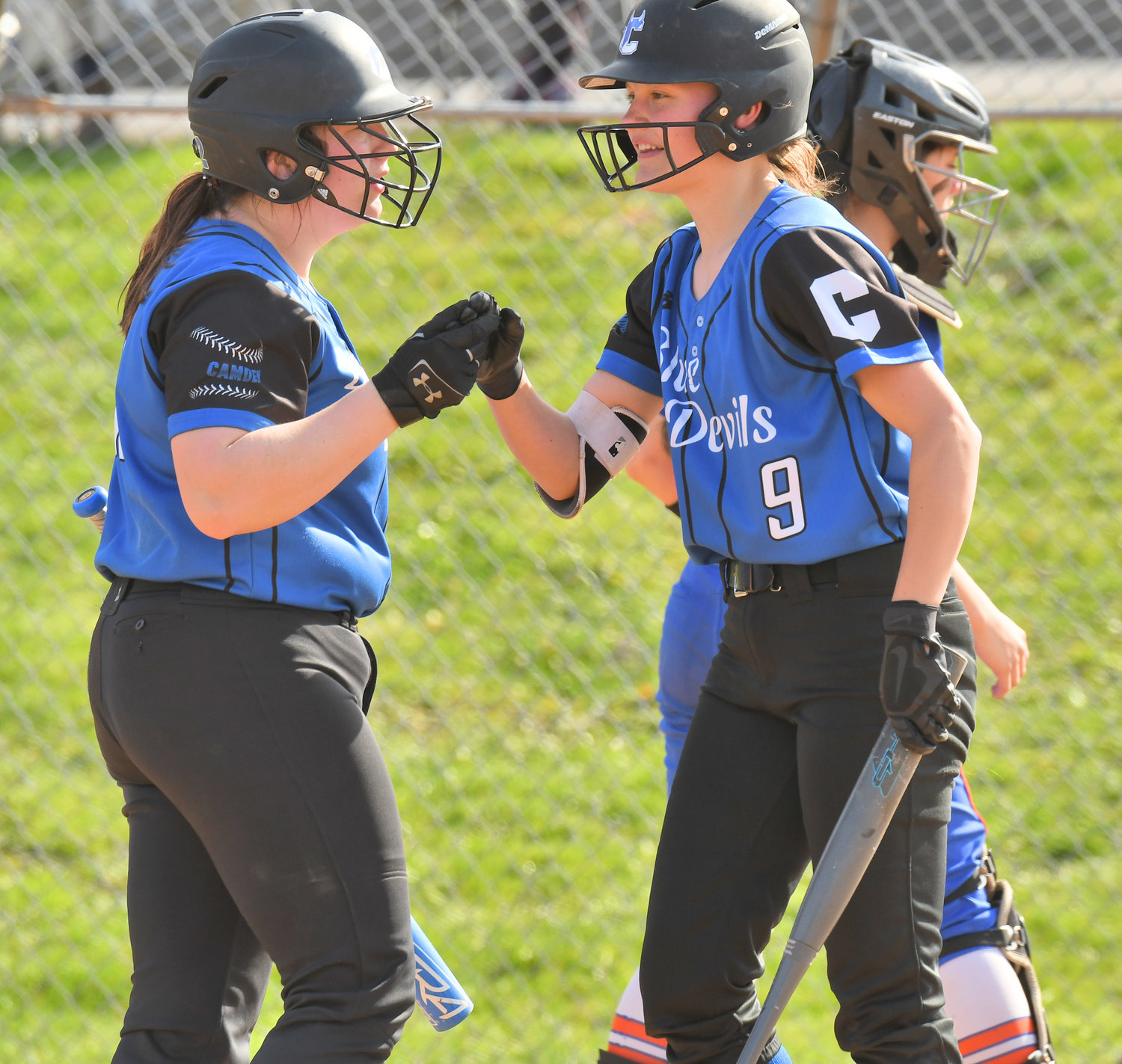 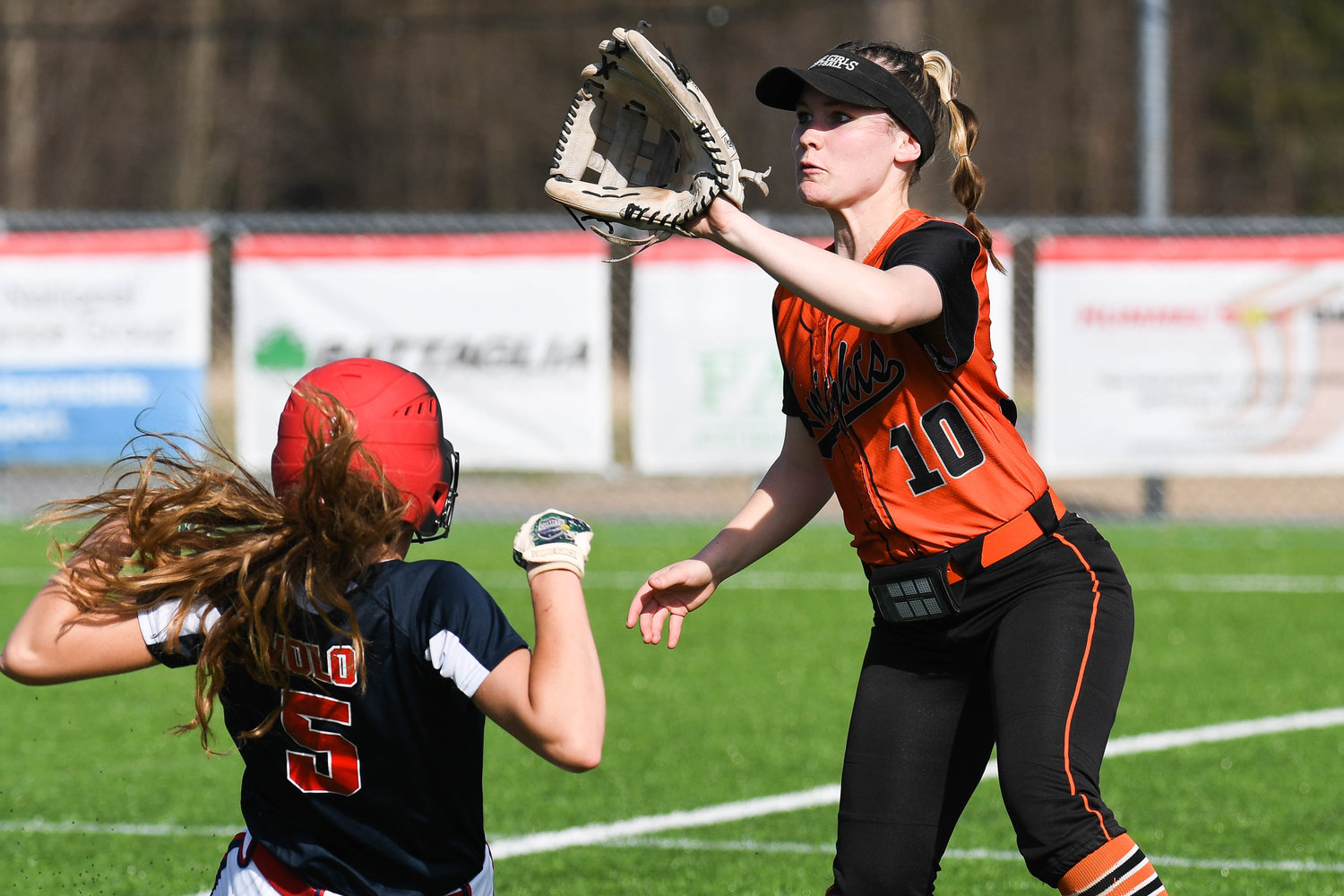 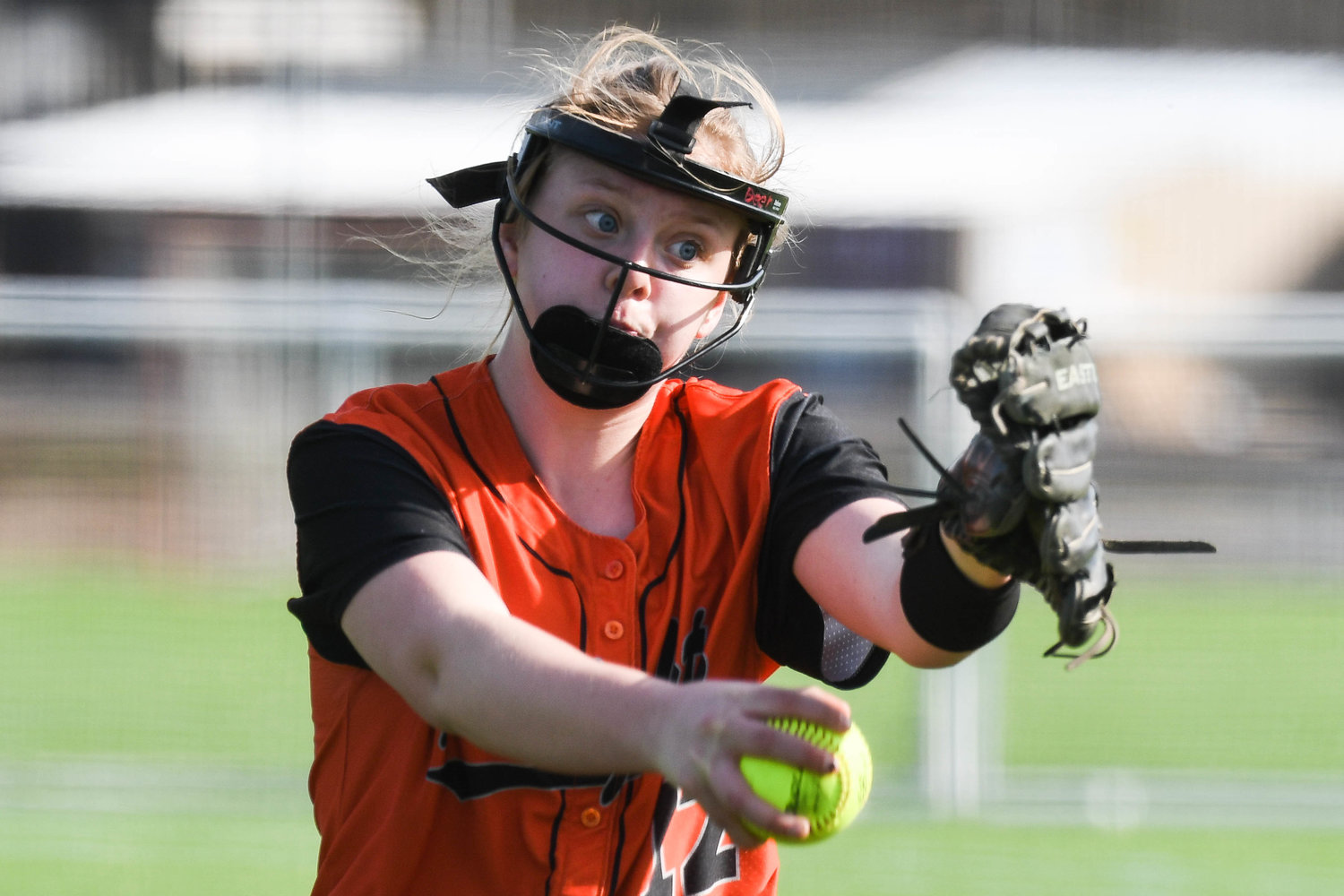 Camden held off a late comeback attempt by Oneida for a 9-6 road softball win in the Tri-Valley League Monday.

The Blue Devils led 4-2 after two innings and 8-2 after a four-run top of the fifth. Then Oneida scored four runs over the last three innings but it wasn’t quite enough.

Ryleigh Johnson got the win in the circle. She went the distance, allowing six runs, one of them earned, on seven hits and three walks. She struck out seven.

Kerrigan Crysler also threw a complete game, allowing nine runs, seven earned, on 12 hits and a pair of walks. She struck out nine.

Oneida falls to 2-3 and is 1-1 in the league. The team played at Vernon-Verona-Sherrill in the TVL Tuesday. Results were not available at press time.

Camden hosted Adirondack in a non-league game Tuesday. Results were not available at press time.

The New Hartford softball team came back from down 4-0 after four innings against RFA Monday to get an 8-7 TVL win in 11 innings in a home game played at Accelerate Sports in Whitesboro.

The Spartans needed two runs in the bottom of the seventh to tie the game 5-5 to push the game to extra innings. Both teams scored a run in the 10th. RFA took a 7-6 lead in the top of the 11th but New Hartford scored two to win.

For RFA, Laina Beer threw a complete game, allowing eight runs, seven of them earned, on nine hits and four walks. She struck out nine.

Morgan Russo had a double and home run to power Central Valley Academy to a 9-2 win at home over Vernon-Verona-Sherrill Monday in the TVL.

CVA scored in all but one inning. Russo drove in two and scored three times. Kaylee Beam had three hits, a run and an RBI.

Madison Obreza was the winning pitcher. Kendal Lehnen took the loss in the circle.

CVA improves to 2-2 and travels to play a league game against Utica Proctor at 4:30 p.m. Thursday. VVS, 0-2, hosted TVL foe Oneida Tuesday. Results were not available at press time.

Whitesboro defeated Utica Proctor 12-2 at home in the TVL Monday.

Courtney Robinson threw a complete game in the win. She allowed two runs, one earned, on four hits and a walk. She struck out six.

Utica’s Joely Welpe had a single and double with an RBI.

Grace Simmons took the loss, going the distance and allowing 12 runs, nine of them earned. She gave up eight hits and walked two while striking out three.

Tagliaferri pitches and hits to help Oriskany to victory

Juliette Tagliaferri was the winning pitcher and had a pair of hits in Oriskany’s 14-6 win over Hamilton Monday.

Tagliaferri threw a complete game, striking out six. She also was 2-for-4 with a double and a run batted in at the plate.

Lani Roberts was 2-for-4 with a double for Oriskany. Brooke Matys and Kaylee Burnop each had two hits as well.

For Hamilton, Kiley Delaney was 2-for-4 with an RBI and Taylor Basher was 3-for-3.

Oriskany travels to Poland to play a league game at 4:30 p.m. Wednesday.

Hanna Rossi threw a two-hitter for Holland Patent as the Golden Knights softball team got a 12-1 road win against Sherburne-Earlville Monday in Center State Conference action.

Rossi allowed one earned run on two hits and a hit batter with 13 strikeouts.

Meanwhile the HP offense scored in five of seven innings, including a five-run fourth. Rossi had a double, homerun, two runs and two RBIs. Ella Armitage had a single, double, two runs and an RBI. Terralyn McLaughlin had two hits, a run and an RBI. Maggie Cummings had two hits and scored four times.

For Sherburne, Haleigh Fisher took the loss, allowing 12 runs, three of them earned, on seven hits and nine walks. She struck out 14.

HP visits Canastota at 4:30 p.m. Wednesday in the league.

The New Hartford Spartans lost 17-7 in girls lacrosse Monday to Indian River in a non-league contest.

New Hartford trailed 10-4 at the half.

Emily Picolla made seven saves in net in the loss.

Leading the way for Indian River was Maddie Goodrich with five goals and four assists and Raven Marsell with six goals and an assist.

Eliz Payne made five saves to earn the win.

The Spartans are 3-2 overall. The team played a TVL contest at Whitesboro Tuesday. Results were not available at press time.

The Whitesboro boys tennis team defeated Camden on the road in the Tri-Valley League Monday, 4-1.

Whitesboro is 1-2 overall. The Warriors hosted Utica Proctor Tuesday in the TVL. Results were not available at press time.

Camden falls to 0-2 and hosted Oneida Tuesday in the league. Results were not available at press time.

The New Hartford boys tennis team got a 4-1 road win over Oneida in the TVL Monday.

David Fener and David Berg won their singles matches for the Spartans.

New Hartford won both singles matches with pairings of Arda Sencicek and Leo Padula and Kenneth Kowalczyk and Deen Kaakour.

New Hartford improves to 3-0 overall. The Spartans hosted RFA in TVL action Tuesday. Results were not available at press time.

Oneida is 3-1 and traveled to Camden Tuesday in the TVL. Results were not available at press time.

Clinton falls to 0-2 on the season and visited non-league foe Little Falls Tuesday. Results were not available at press time.

The RFA girls golf team started the season with a home win over Oneida, 214 to 296, Monday at Rome Country Club.

Evie Denton led the way for RFA, firing a 47. Kayleanna VanDeusen shot a 50. Leah Marsden shot a 58 and Belle O’Rourke shot a 59.

In Oneida’s first match of the season, Stella Davis and Claire Vacarro had team-best 64s.

Oneida plays next against Holland Patent and New Hartford at 3:30 p.m. on May 2 at Stonebridge Golf Club.

Michael Occhipinti and Jamie Stole were the RFA medalists with scores of 45. Lenny Dormio shot a 52 and Landon Piersma shot a 53.

CVA’s medalist was Connor Tutty with a 40.

RFA is 0-2 and hosts Whitesboro in the TVL at 3:30 p.m. Wednesday at Rome Country Club.

CVA, 1-0, was at New Hartford Tuesday in the league. Results were not available at press time.

The Oriskany boys golf team opened the season with a 182-256 win over host Canastota Monday at Kanon Valley.

The medalists for Oriskany were Nick Deriso and Patrick Maher, who both shot a 43.

Oriskany defeated Mount Markham 106-146 in the league Tuesday at Cedar Lake Country Club. The match was shortened to five holes.

The Clinton boys golf team defeated Holland Patent at home at Skenandoa Club by a score of 192 to 216.

Anthony Ritz and Caden Engle both shot 43 to lead the Warriors.

HP travels to Canastota at 3:30 p.m. Wedneday at Kanon Valley.

CVA’s Connor Tutty was the top medalist with a score of 40 in the team’s open match of the season. Gabe Smithson totaled a 41, Nolan Tutty had a 44, Troy Kelly finished with a 48 and Derek Newtown had a 51.

For Rome Free Academy (0-2), Michael Occhipinti and Jamie Stolo led the team with a 45. Lenny Dormio had a 52, Landon Piersma followed with a 53 and Brody Barrett had a 55.

New Hartford won 281-233 in the first match of the season for both teams.s

New Hartford junior Cam Jenkins was the medalist after carding 44. RFA’s top individual was Occhipinti, who had a 48.

New Hartford is scheduled to play Central Valley Academy at 3:30 p.m. Tuesday at Skenandoa in Clinton.

RFA is also set to play Wednesday against Whitesboro at Rome Country Club.

Jake Coughlin had the low round for Whitesboro with a 40.

The medalist for VVS was Caleb Decker, who shot a 39.

Whitesboro will play against host RFA at 3:30 p.m. Wednesday in the TVL at Rome Country Club.

VVS hosts Camden at 3:30 p.m. Wednesday in the league.

The Utica Proctor boys tennis team won all five matches against RFA in a home match in the TVL Monday.

The doubles pairs to win were Emin Skiljan and Maksim Morgan and Khang Lai and Ayush Gurung.

Utica is 2-0 overall and 1-0 in the TVL. The Raiders were at Whitesboro Tuesday in the league. Results were not available at press time.

RFA falls to 0-2, 0-1 in the league, and traveled to New Hartford for a league match Tuesday. Results were not available at press time.

HP shuts out Sauquoit in tennis

The Holland Patent boys tennis team got a 5-0 road win at Sauquoit Valley in the Center State Monday.

The winning pairs for the Golden Knights in doubles were Christopher Kelly and William Zimmerman and Sawyer Locke and Daniel Carhart.