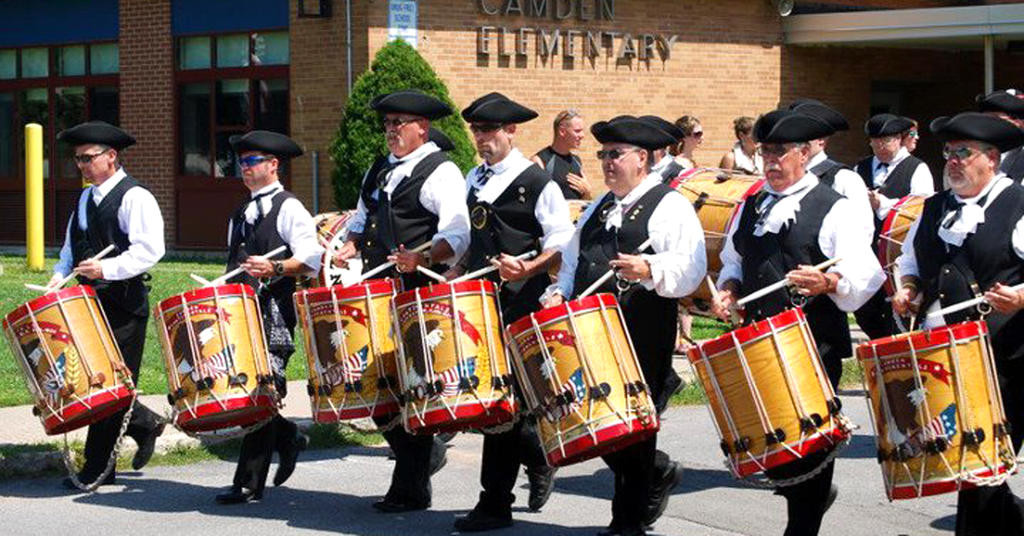 YANKEE DOODLE — Members of the historic Camden Continentals Fife and Drum Corps march down the road near Camden Elementary School during a recent parade. (Photos submitted) 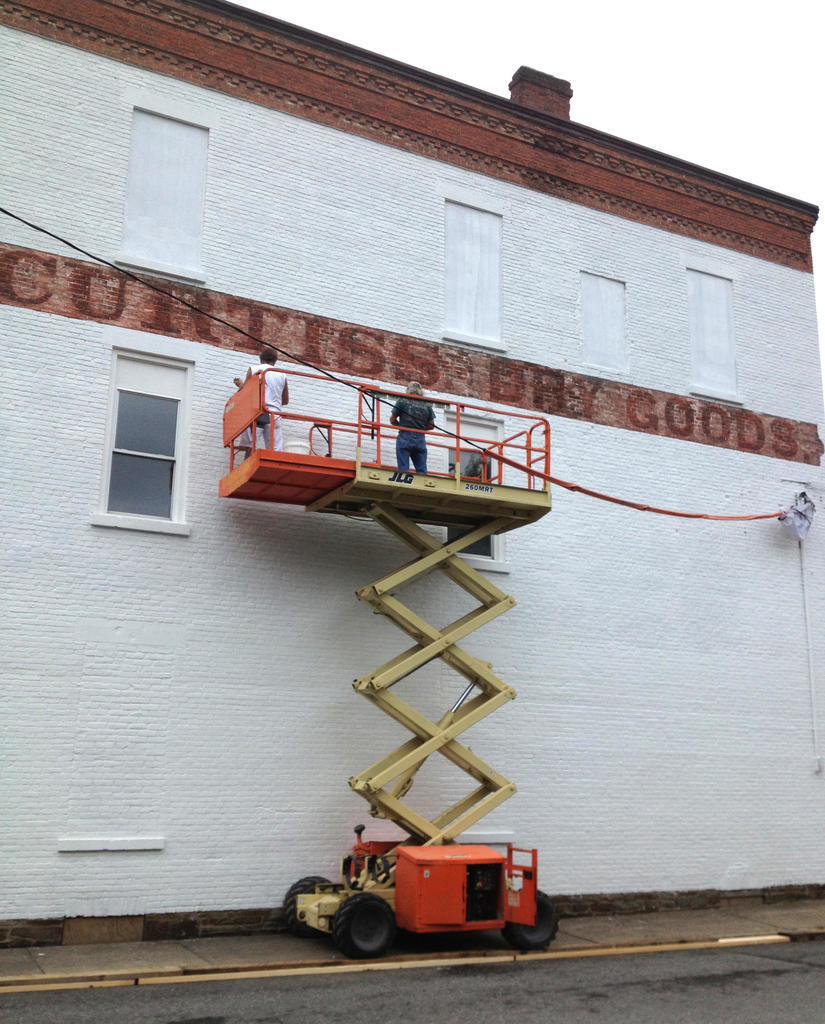 MEN AT WORK — Two workers on a scaffold paint the wall of the Camden VFW post white to give artist Jane Grace Taylor a clean canvass to work on to paint the Camden Continentals Fife and Drum Corps mural. 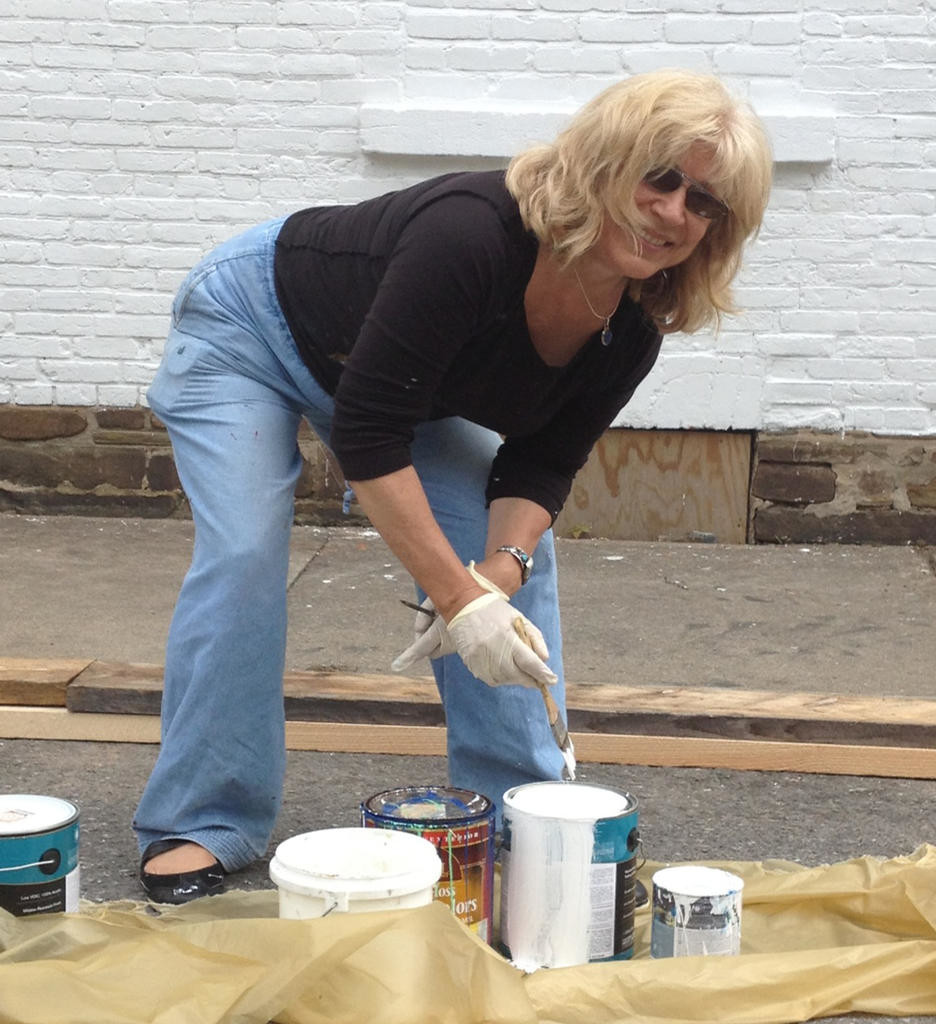 ARTIST IN ACTION — Artist and retired art teacher Jane Grace Taylor gets ready to paint the Camden Continentals mural on the VFW wall. The mural is an enduring historic view of the renowned Camden group. 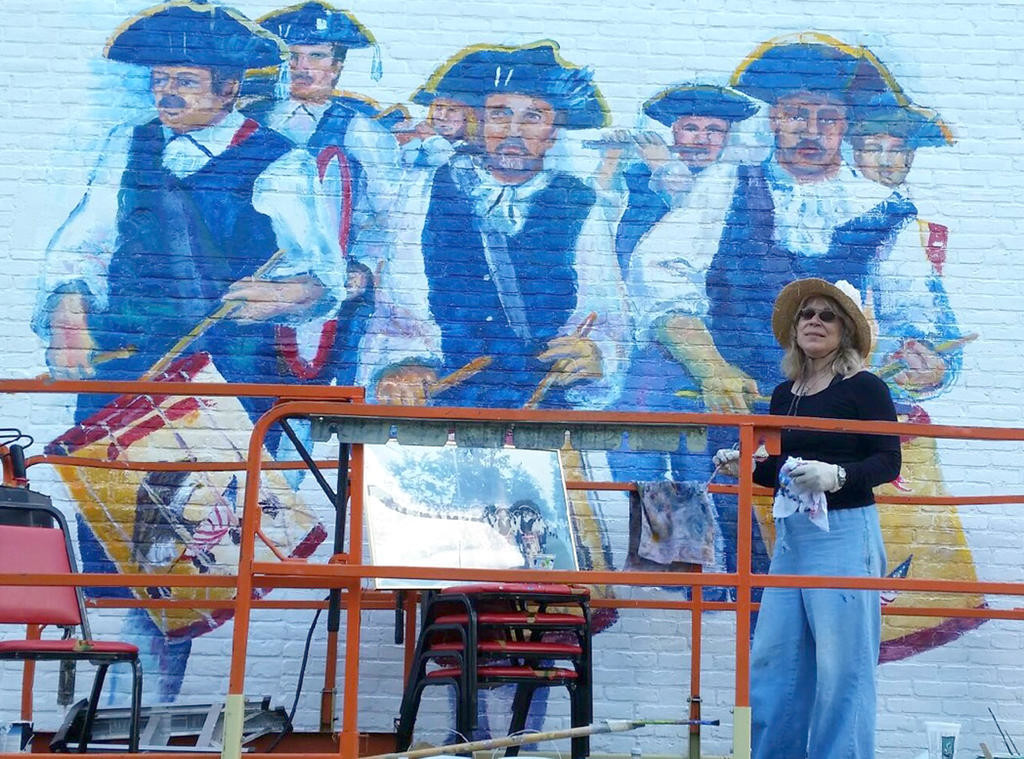 COMING TO LIFE — Members of the Camden Continentals Fife and Drum Corps, and the ancestors who started their legacy 164 years ago, begin to take shape on the VFW wall by the hands of Jane Grace Taylor. (Photo submitted)
Previous Next
Posted Sunday, August 31, 2014 9:00 am
Nicole A. Elliott

CAMDEN — Frank Bergin has a lot of pride for his hometown.

He founded the Camden Irish Parade and later moved on to organize the efforts that led to the construction of Freedom Park, which honors Oneida County’s 12 heroes who made the ultimate sacrifice in the wars of Iraq and Afghanistan.

Now Bergin is on to a new project.

To add to the “beauty, history and pride” that is the Queen Village, Bergin said he is trying to raise money to help support the painting of the Camden Continentals Fife and Drum Corps mural on the rear wall of the Veterans of Foreign Wars Post #6530 on Main Street, facing the village park.

Enlisted for active duty is artist and retired Rome schools teacher Jane Grace Taylor. Taylor most recently completed the 100-foot Erie Canal mural on the rear of the town building in Verona facing Route 46. She is most known for her work on the Patriot’s Wall off Erie Boulevard in Rome, which is commonly mistaken for Paul Revere. Walls have also become the canvasses for Taylor at the Erie Canal Village and Rome Sports Hall of Fame, as well as the Martin Luther King Jr. Dream Park on South Street in Utica.

Taylor, who received her master’s of fine arts degree from Syracuse University, has won two national Sumi-e Society of America, Inc. awards for her watercolor work, in addition to several other prizes. She now resides in Webster, Monroe County.

By Wednesday evening Camden’s mural was complete, and now Taylor is headed for an art show in Rockville, Md., near Washington, D.C., where some of her watercolor works have been accepted. The Glenview Mansion show opens the second week of September.

“The Camden fife and drum corps is 164 years-old and I am putting ghost images of founding members in the clouds,” Taylor described of her work earlier in the week. “There are 20 portraits in the painting. There were 18 (portraits) in the recent Utica mural, so this is a new record. This is my third mural this summer.”

Taylor used images of Continental members in her painting, much like she used a picture of Brigadier General Peter Gansevoort to inspire her patriot mural in Rome.

​“The people of Camden are proud of their hometown and go to great lengths to take care of it. Camden also takes great pride in a very special group of people who have been an important part of every parade and ceremony in Camden and who have brought cheers from young and old, the Camden Continentals Fife and Drum Corps,” Bergin said.

​A “costly, but worthwhile effort,” Bergin said he hopes community members will step up and support the painting of the mural. He said the cost is approximately $4,500.

Those wishing to make a donation toward the effort may send donations to The Camden Fife and Drum Corps Mural, 2682 Waldron Road, Camden, N.Y. 13316.

Camden Continentals Corps Director Jeffrey Waterman said it is a “great privilege and honor” to have his historic drum corps featured on the VFW.

“It’s been quite an honor and we’re really happy about it,” he said.

The Camden Continentals did not actually begin in Camden.

In 1850, one of Waterman’s ancestors, Alanson White, organized a fife and drum corps in Taberg. In high demand in their time, the Taberg Fife and Drum Corps played at political rallies and patriotic celebrations, including the inauguration of President Ulysses S. Grant.

It was in 1947 that the corps moved to Camden and became the Camden Continentals.

Waterman described the painting of the mural as a “one person show,” with several bystanders stopping by to watch Taylor’s progress.

“It’s amazing to see because I can’t even draw a straight line,” he laughed.

Waterman said the mural was Bergin’s “brain child” and he recently provided him with several pictures of the fife and drum corps over the years.

Currently about 40 men and women make up the corps. Waterman is celebrating his golden anniversary with the corps this year, and hopes to one day pass on his legacy to his Army son.

“I’ve been a member of the Continentals since I was 9 years-old,” said Waterman, who has directed the corps since the end of 1973. “Actually my sister got in the year before me — she’s also a fifer. I started out on fife too because I used to watch my uncle take the corps around town. It’s just fun to be a part of it.”

The Camden Continentals can still be seen at local parades, and occasionally they perform competitively at firemen’s field days. They do between 15-18 performances a year, Waterman said. To keep the corps going, they sell store gift and gas cards as fund-raisers throughout the year.

“We have quite the reputation here and we appreciate the support,” Waterman said. “Camden has always been great to us.”