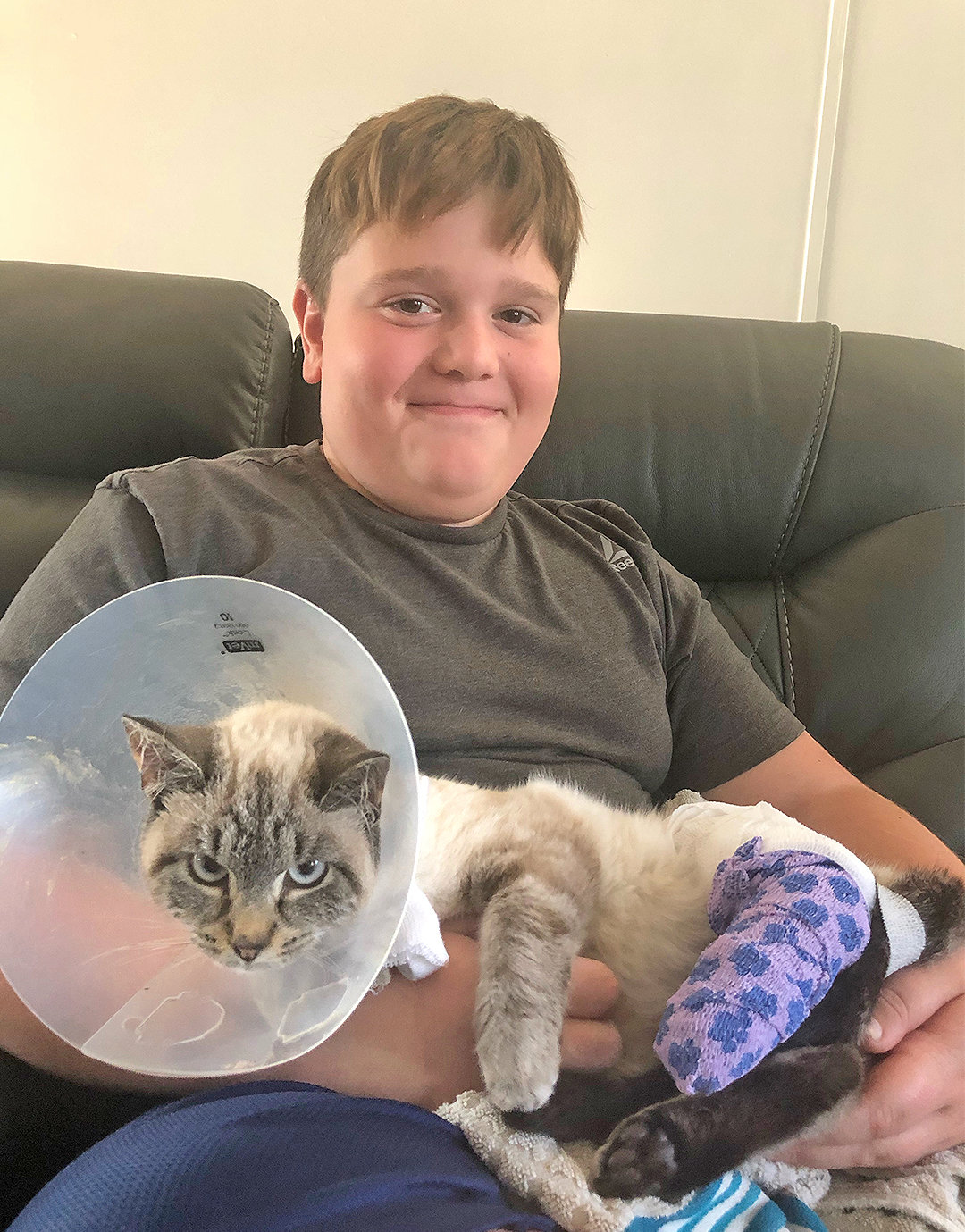 ON THE MEND — 11-year-old Jayden Rattray of Camden holds “Lucky”, a cat rescued after it was hit by a car in Camden and left for dead. After failing to find an owner, Jayden has adopted the cat as his own.
(Photo Courtesy Karen Hall) 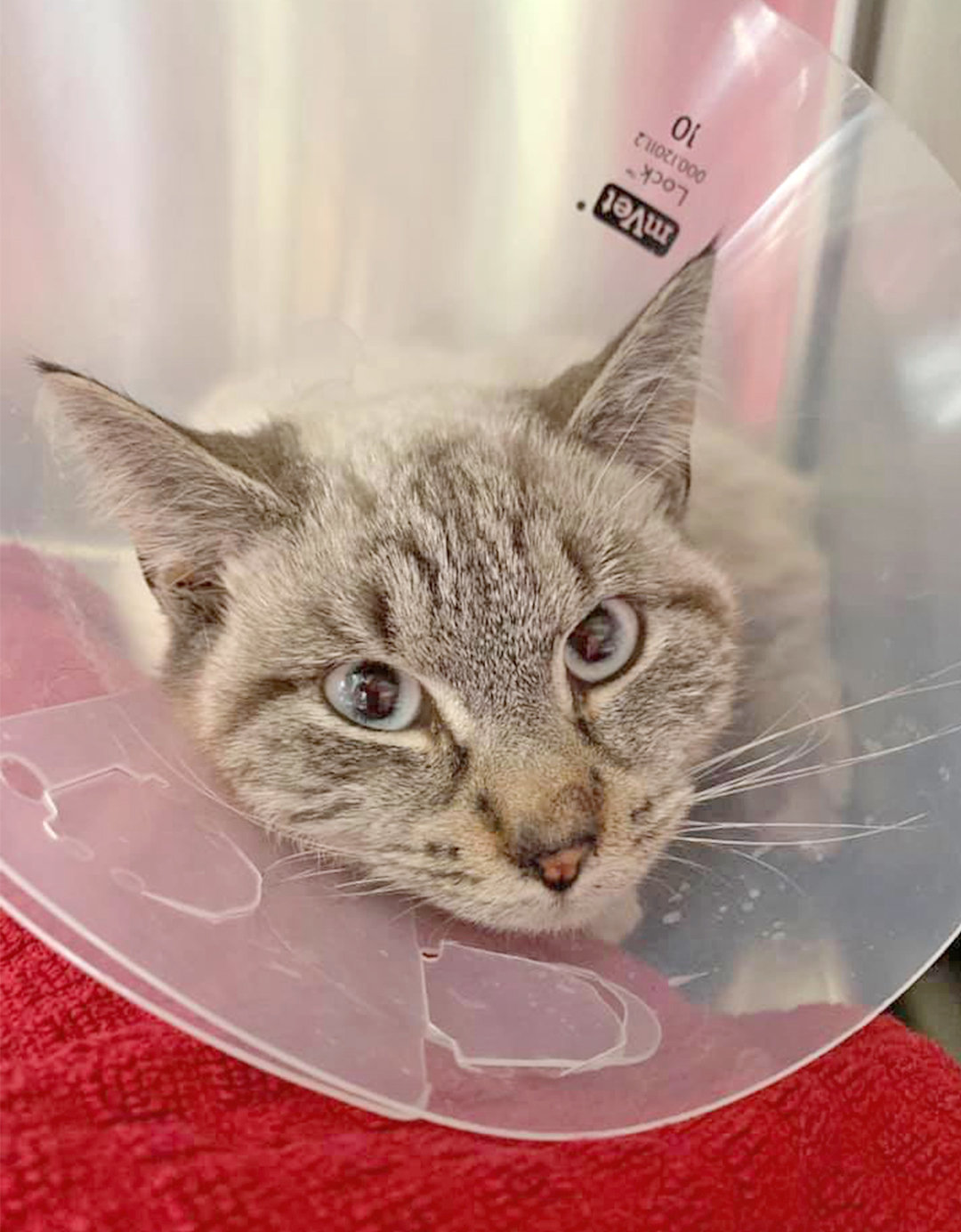 RECUPERATING — “Lucky” the cat gets some rest and recuperation after being hit by a car and adopted Jayden, Rattray, 11, of Camden.
(Photo Courtesy Karen Hall)
Previous Next
Posted Tuesday, November 10, 2020 11:44 am
Charles Pritchard
Staff writer
email

CAMDEN — Jayden Rattray, 11, was being driven home recently by his grandmother, Karen Hall, when they saw something in the middle of the road.

“It was by the post office, laying in the road and it was moving,” Hall said. “We realized it was a cat that got hit [by a car]. And whoever hit it, left it there.”

But the boy and his grandmother couldn’t leave it there to suffer. Jayden got out of the car, his grandmother said, and carried the cat to the side of the road. Somebody notified the police. Hall said since there’s no dog warden equivalent for cats, people are told to leave injured cats.

“The local vet in Camden wouldn’t take the cat unless I told them I would be financially responsible,” Hall said. “At that point, I couldn’t be. So we kept calling and Clinton Pet Vet told us if we could bring them the cat, they’d take her.”

Jayden asked his grandmother to get the injured cat to the Clinton Pet Vet and find someone who can take care of her.

Hall said in the two hours that Jayden held the injured cat as he and his grandmother were in the process of getting it much needed medical attention, Jayden fell in love with the animal — and vice versa.

“I wasn’t just going to let her stay there,” Jayden said. “What if you were an animal and you got hit by a car, and they just let you sit there?”

The cat, which Jayden has named “Lucky,” suffered a broken pelvis, a torn up leg, and a concussion.

“We think someone owned the cat, because it’s declawed,” Jayden said.

They’ve tried to find an owner, reaching out on social media in the hopes that someone would recognize it — but to no avail.

“We posted it all over and Clinton Pet Vet has posted stuff as well,” Hall said. “No one has come forward and I don’t think anyone will.”

Unless an owner comes forward, Hall said it looks like Jayden will be adopting Lucky. All the while, Jayden called in to Clinton Pet Vet almost every day, asking about Lucky’s condition. She came home with Jayden on Nov. 9.

The cat isn’t out of the woods yet; however “she’s in rough shape,” Hall said. “She has an infection in her leg. And she’s in a lot of pain.”

Hall added that the cat definitely calms down and relaxes around Jayden, who sits with her and keeps her company as she heals.

Jayden urged residents to take responsibility and to not let other animals suffer.