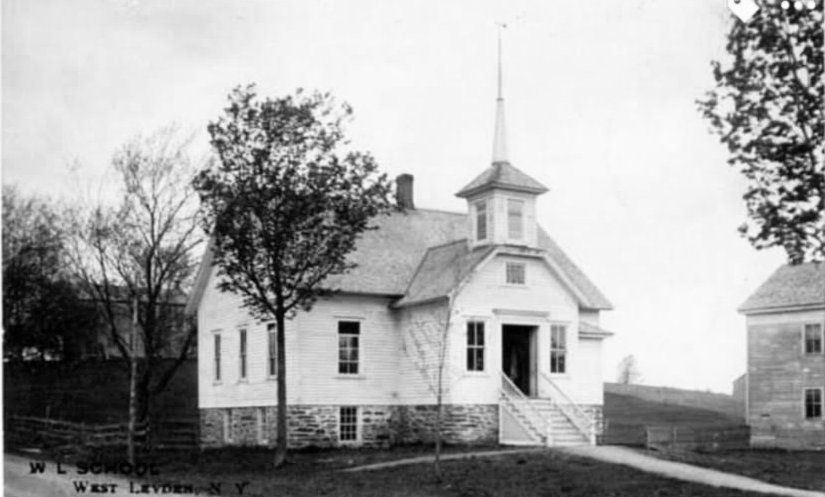 THOSE WERE THE DAYS – A photo of a school in West Leyden, NY, from days gone by. The image used here is from the collections of Mary and the late Larry Myers, as well as the Lewis County Historical Society, the Lyons Falls History Association, and from kind donors who wish to remain anonymous. The images are part of a continuing series printed each week in the Boonville Herald.
(Submitted photo)
Posted Thursday, June 23, 2022 7:00 am

NIAGARA MOHAWK TO BRING GAS SERVICE TO HOLLAND PATENT – Niagara Mohawk Power Corp. officials have announced that they plan to expand the company’s natural gas service into the Village of Holland Patent now that the village and town boards have approved a petition for the area.The Trenton Town Board approved the company’s franchise petition at a meeting last Wednesday, June 11, and the Holland Patent Village Board offered its approval Thursday evening, June 12. Niagara Mohawk Gas Regional Manager Bill Nicholson said he expects to receive approval from the New York State Public Service Commission this summer.

TWO SOUTH LEWIS SENIORS HAVE ESSAYS PUBLISHED NATIONALLY – Valerie Ackerman and Dale Austin, both seniors at South Lewis Junior-Senior High School, have received notices that their original essays have been accepted for publication in the National Anthology of High School Essays published by the National Essay Press. Both essays had previously been published in the New York State edition of the anthology. Miss Ackerman is the daughter of Mr. and Mrs. Fay Ackerman of Constableville and will attend Alfred University in the fall. Austin, the son of Mr. and Mrs. Leonard Austin of Glenfield, will attend Houghton College.

CORNER STONE LAYING – The corner stone of the New M. E. Church of Boonville N. Y. will be laid on Saturday, June 15th at 10-½ o’clock A. M. with appropriate services by Rev. Dr. L. C. Queal, Rev. C. S. White Presiding Elder of Utica District, and others. A general invitation to Pastors and people of other charges and a special invitation to former pastors of this charge – also pastors and people of other denominations and the public generally are cordially invited to attend. – C. PHILLIPS, Pastor.

CHEESE $.18 – Cheese prices were again advanced on Saturday in Watertown. The salesmen were expecting a slight increase owing to the fact that the other markets of the week were a trifle higher. The price committee had very little trouble on Saturday in reaching a basic price. R.F. Baker announced that cheese was worth 18 cents. A year ago the price paid was 13-½ cents. Only once last year did the price get up to 18 cents and that was the last session of the Board in November.

THE STEUBEN MONUMENT – The monument to the memory of Baron Steuben and designed through coming years to mark the spot where he rests has been completed and put in place. It is 25 feet in height and is said to be a fine specimen of tombstone architecture. It will soon be dedicated to its sacred purpose by appropriate and imposing ceremonies. It will doubtless become a favorite resort for all who are familiar with the life and services of the patriot hero who rests beneath the monumental pile of marble.