ORISKANY — Businessman James Kernan wants to spearhead the revival of the former felt mill on River Street.He bought the complex earlier this year at a county tax foreclosure auction and is now … 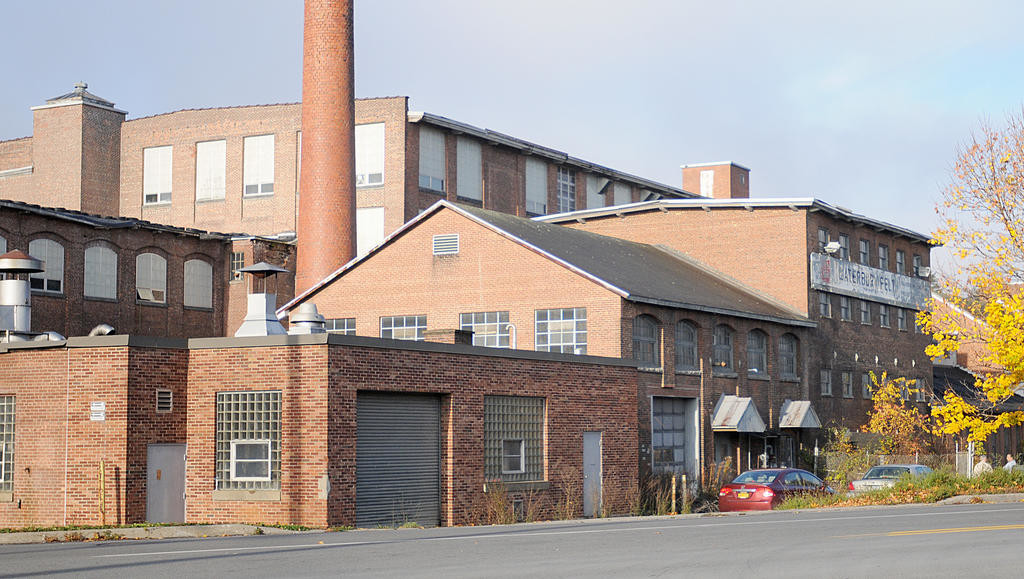 NEW LIFE — James Kernan has bought the former Waterbury felt mill in Oriskany and says he’d like to start its redevelopment by opening a career center there after renovations. The complex covers 4.4 acres. (Sentinel photo by Makenzi Enos)
Posted Tuesday, November 4, 2014 4:00 pm

He bought the complex earlier this year at a county tax foreclosure auction and is now proceeding with redevelopment plans.

“We will retain the historic elements that make this a landmark property,” he said. “Such as the bell that over a century ago rang every day for the community. At the same time we will modernize the facility so it can house jobs for the 21st century.”

The building’s interior, roof and flooring systems require a substantial amount of work.

His first goal is to open an apprenticeship program, similar to one that he presently operates in the Bronx at SUNY Maritime College. The Oriska Jobs and Careers Center provides workers a salary while getting on-the-job experience and classroom training in the construction trades.

The local version would serve the residents of Utica, Rome and the surrounding communities.

“It will help bring economic opportunity to the region,” said Kernan, a lawyer, engineer and former CEO of Oriska Insurance Co., headquartered in Oriskany. He sees an opportunity coming with the development of a nanotechnology sector in the local economy.

Alongside the careers center, the newly named Waterbury Square could also house a server farm, which is a cluster of computer servers that are networked together in one location. Water for cooling the server operation would come the Erie Canal feeder system. The Erie Canal passed through the village until it was re-routed during major reconstruction.

Such a venture would help attract high-wage tech jobs to the region, says Kernan.

But before any of this happens, Kernan is working to sort out legal issues with the mill’s former owner.

Questions have arisen about whether the former owner is entitled to salvage wire and other metal items from the building, including the bell that has been part of the community since 1819.

“Rather than allow the property to become another structurally dilapidated facility, we plan on building upon what is there now,” he said.

The matter is scheduled to be argued Nov. 12 before a state Supreme Court justice in Rome.

Kernan offered the highest bid of $16,000 for the complex at the tax auction in August. The accumulated delinquent charges totaled $313,740, according to county records.

A mill has been at that location for more than two centuries, first as the Oriskany Manufacturing Co., according to records. Later it operated under the Waterbury name for many years.