Bulldogs and Wildcats to tangle a third time, this one for a section title

Bulldogs and Wildcats to tangle a third time, this one for a section title 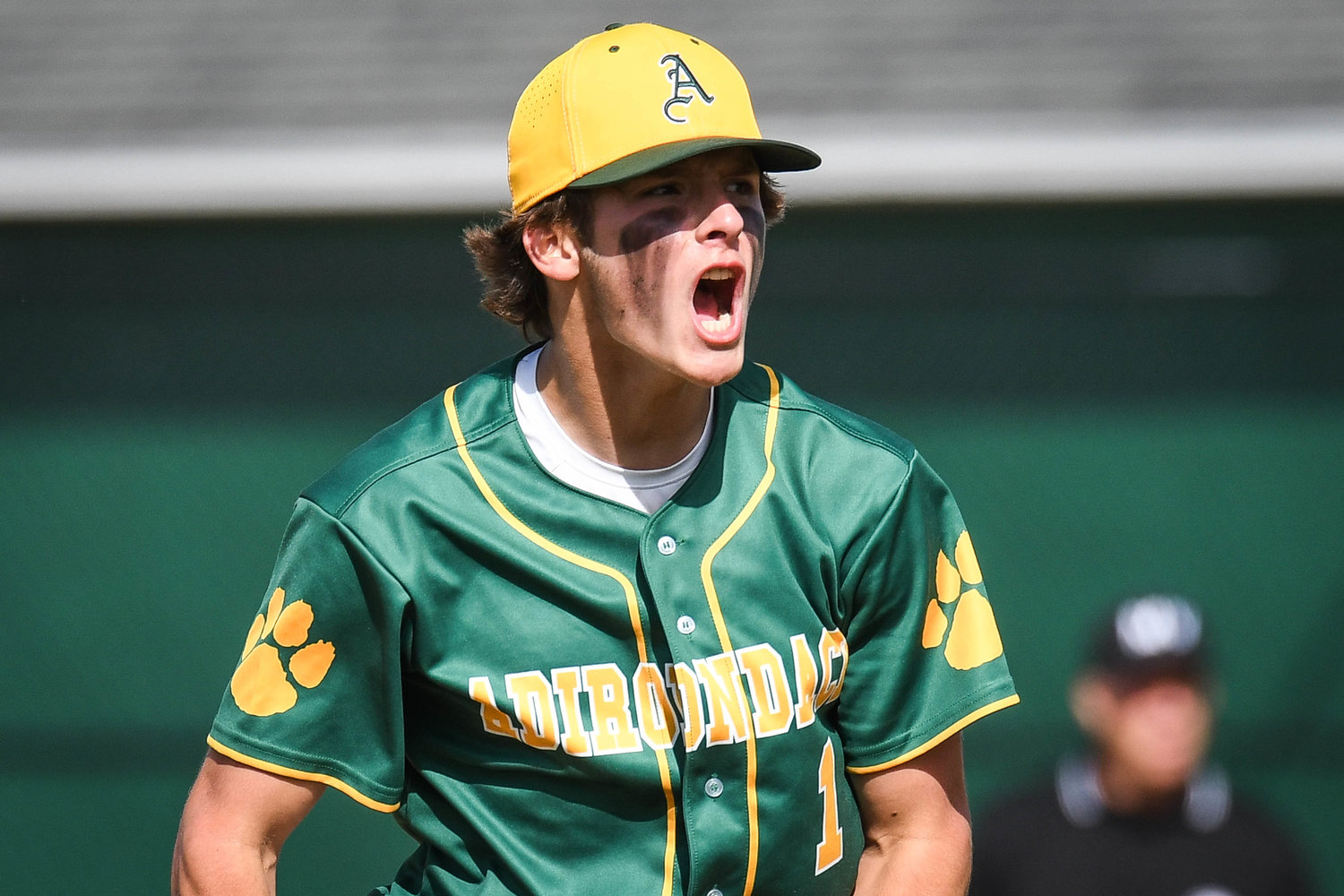 Adirondack starting pitcher Max Weiler celebrates after striking out the side against Bishop Ludden in the second inning of a Section III Class C semifinal on Saturday at Donovan Stadium at Murnane Field in Utica. Weiler got the win as the Wildcats punched their ticket to the championship game Tuesday with a 6-1 victory.
(Sentinel photo by Alex Cooper) 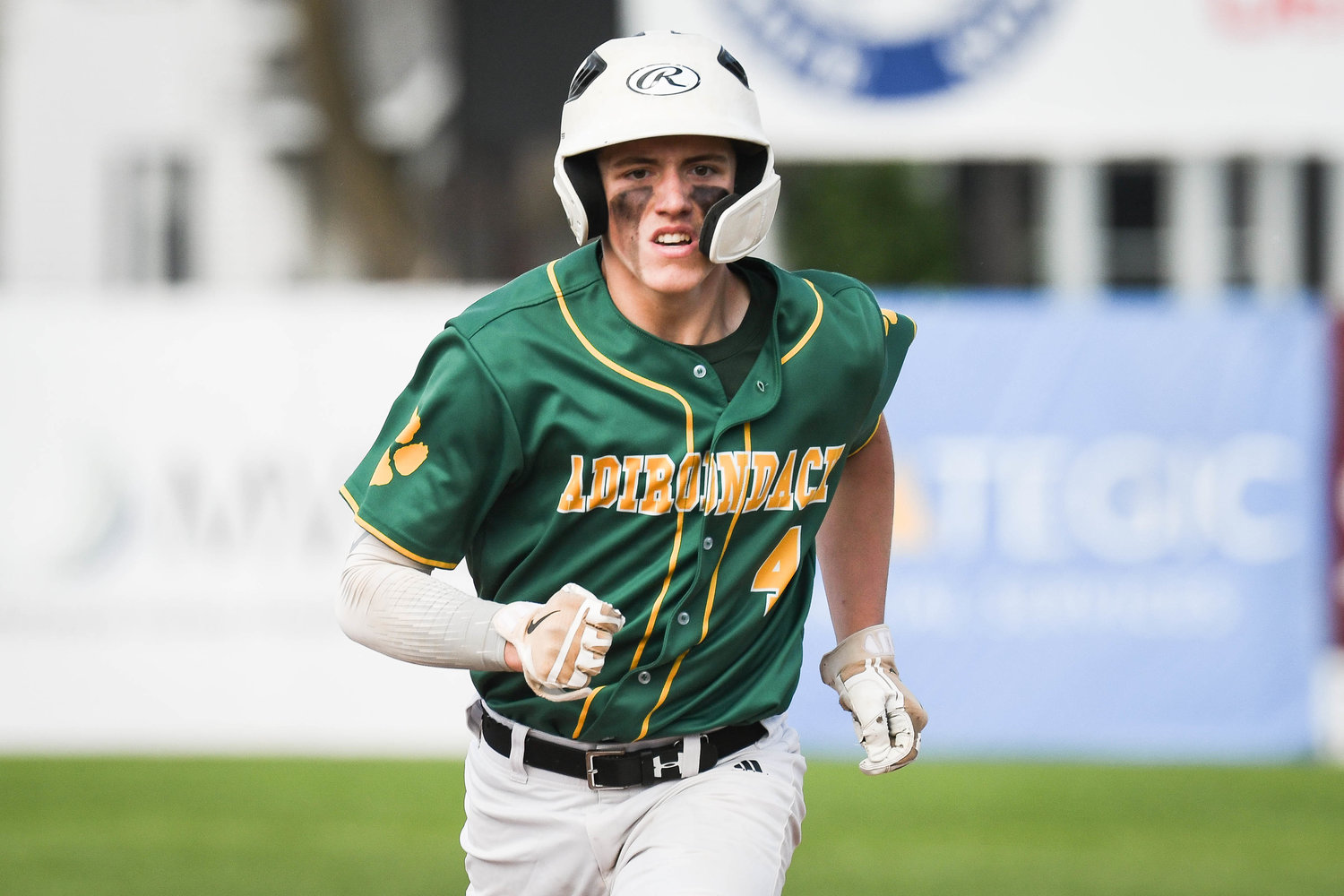 Adirondack baserunner Bailey Gleasman races to third base during the Section III Class C semifinal against Bishop Ludden on Saturday at Donovan Stadium at Murnane Field in Utica. He was 2-for-3 with a double and stolen base in the Wildcats' 6-1 win.
(Sentinel photo by Alex Cooper) 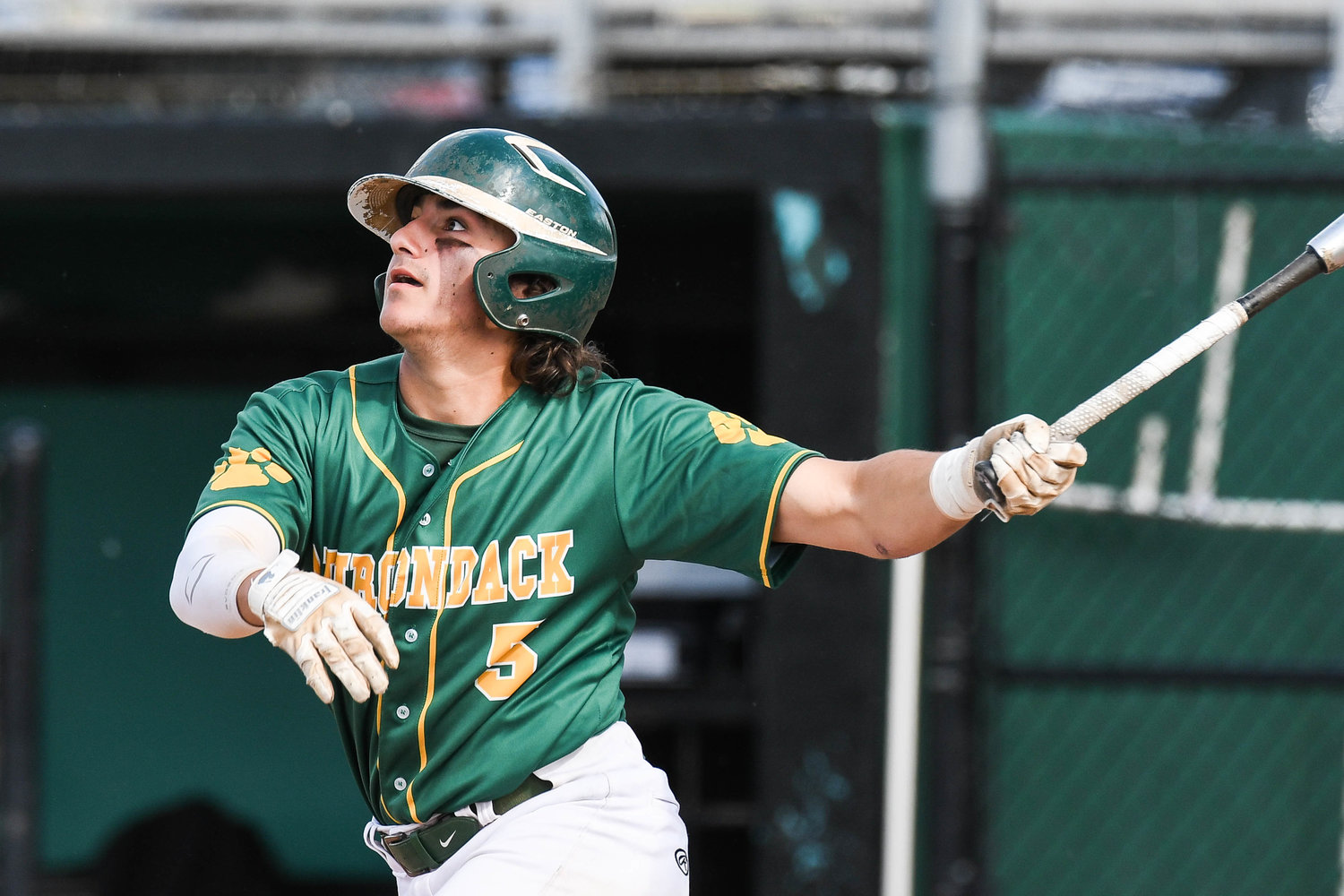 UTICA — The Section III Class C baseball title game will the third meeting of the season between undefeated top seed Westmoreland and underdog 11-seed Adirondack. The two teams won their semifinal games Saturday at Donovan Stadium at Murnane Field, first a 6-1 win for Adirondack over 10-seed Bishop Grimes then the Bulldogs 12-3 over 12-seed LaFayette.

The Westmoreland game started off a lot like many of the Bulldogs' other 18 wins, with a lot of runs scored in the first inning. Those big early leads have helped power the team to 15 wins by eight or more runs. They've outscored their three playoff opponents by a combined total of 44 to eight.

This time Westmoreland scored eight runs in the bottom of the first inning, knocking LaFayette starting pitcher Ben Ryan out of the game after 48 pitches and only one out.

It started quietly enough, with leadoff batter Josh Suber's hit finding grass between fielders who couldn't quite converge on it in time. Then Caleb Miller smoked a triple to right centerfield that chased home Suber. After two walks and a fielder's choice to get Miller out at home, the carousel of baserunners really started turning. Carson Nestved singled to score Jerry Fiorini and Mike Scalise, who had both walked, making it 3-0. Mitchell Holmes followed with a two-run double to score Owen Davison and Nestved, and it was 5-0. Suber came up again after a pair of walks that loaded the bases. He smacked a two-run single that scored Holmes and Hunter Kierpiec, who had walked. That was Ryan's last batter. Miller made it 8-0 with a sacrifice fly off reliever Andrew Porter that was so deep Anthony Sawanec scored from second base.

The big inning was a great example of the Bulldogs' game plan every time out, said head coach Paul Engelhart after the win. It's opposite field hitting, moving runners over and being aggressive on the base paths. "Innings like that kind of snowball. We try to put up a crooked number and make them play catch up," which takes a lot of energy, he noted.

Eight runs were plenty for Miller, Westmoreland's starting pitcher. He went the distance to earn the win, his eighth of the season. He allowed three runs, two of them earned, on six hits and one walk. He struck out nine.

"Caleb pitched a heck of a game," Engelhart said. And, he added, he plans to give him the ball to start the championship game Tuesday.

Miller said after the win that his approach on the mound didn't change when he went out for the top of the second with an eight-run lead. "I have to stay focused. I have to perform or they can do the same thing we just did." And the rest of the team has the same approach, he said. "We're just a high energy team" that likes to compete.

LaFayette did get two runs back in the top of the second. Daniel Porter led off with a double then Jacob Sadowski singled. Sean Zajac singled in Porter to make it 8-1 then Aiden Newkirk got a one-out fielder's choice to score Sadowski.

The two pitchers both settled in, with neither offense scoring another run until Westmoreland added three in the bottom of the fifth.

The Bulldogs pushed their lead up to nine in the fifth. An error allowed Nestved to get on base to start the inning. Holmes doubled behind him. Kierpiec hit a sacrifice fly, Suber got an RBI groundout and Miller's bloop single scored Sawanec, who had walked in front of Suber. That made it 11-3.

Westmoreland added one more run in the sixth when Davison singled and advanced two bases on a wild pitch. Nestved reached on an error and Davison scored on the play.

LaFayette managed a lone run in the top of the seventh but it far too little and far too late.

"I'm just trying to get on base any way possible," said Suber after the win. "I don't think any pitcher we've seen we've had real trouble with," said the center fielder, who had two singles, a walk, a run scored, three RBIs and a stolen base. He said the keys to keep the win streak going are in the team's balance. "Pitching is a big thing for us," he said, but also, "everyone, one through nine, can hit this year."

"We just have to go 1-0 that day," Miller said of the championship game. "We can't fall back on our two wins already," he said in reference to their success against Adirondack in the regular season.

Westmoreland will now take on fellow Center State Conference team Adirondack in the Class C championship game at 7 p.m. Tuesday at Onondaga Community College. The Bulldogs won both games the two teams played in the regular season, 11-0 at home on April 18 and 11-8 on the road May 7.

The first matchup, said Engelhart, was against a depleted Wildcat team. The close second game, he said, "was a gut check for us." But, he said, Adirondack has been improving all season, so "it's not a surprise to me at all" to see them make it to the title game.

Adirondack put together a three-run third inning and then relied on the left arm of starting pitcher Max Weiler to help the team earn a place in the Class C title game.

The Wildcats broke a scoreless tie in the top of the third. Gabe Cihocki led off with a walk then Alex Kaun moved him over with a sacrifice bunt. Kreedon Rogers singled then Colin White singled after him to drive in Cihocki. Brett Sanford followed with a two-run double deep to the right centerfield gap.

White flashed the leather to kill a potential rally in the bottom half of the inning. With two outs and a runner on second, the Adirondack third baseman dove in the hole, snared the ball and fired on to first to end the inning and prevent what could have been a run-scoring hit.

Meanwhile Weiler was dealing on the mound. He didn't give up Bishop Ludden's lone run until the fifth, and even then he buckled down in a tight situation to hold the lead, which was 4-1 at the time.

Through the first four innings, Weiler had not allowed a hit. In the fifth, he loaded the bases with one out on two walks and a hit batter. He gave up a two-out RBI single to Patrick Towsley but then retired the next batter.

"He threw strikes. That was his plan," said Adirondack head coach Phil Puleo after the win. "He's hard to hit when he's accurate and his soft stuff is good." Puleo, who made a mound visit in the fifth when Weiler was showing some frustration, said after the game: "That's probably the only thing he's had to overcome." His message to the players at the mound and on the bench after the inning was simple: "Every game there's going to be some adversity. If you can get over that, we'll be fine."

After the game, Weiler said the early run support was key. "Once you get runs, your energy level goes way up." He said that when the coach game out for the mound visit, "he (told) us we have to slow down," and that breather, that chance to refocus was all he and his teammates needed, he said.

The Wildcats pushed the lead to five in the top of the seventh. Kaun led off with a walk then Rogers put down a sacrifice bunt. An errant throw allowed him to reach base while Kaun came around to score. Then Rogers scored the last run of the game in style — stealing home when Dunham delivered a pitch as he raced to the plate. He dove headfirst and touched home just after the pitch arrived.

In the bottom of the seventh, Sanford came in to close out the game on the mound. He allowed one hit but no runs and the Wildcats retired the final out then celebrated a Class C title game berth.

Weiler got the win, going six innings and allowing a run on one hit with four walks and two hit batters. He struck out six.

Dunham took the loss in a complete game effort. He allowed seven hits and three walks with four strikeouts.

"I knew we had it in us," Puleo said. The team struggled at the start of the season, losing its first five games, including one at Westmoreland. But, he noted, "We didn't really have our set nine" at the time, for various reasons. Halfway through the season, the lineup was clicking and "all 14 guys (had) bought in." They won five of the last seven regular season games, and the three playoff wins have pushed the team's record to 11-11. "We got hot lately. Hoping to keep it rolling."

To finally get a win against the Bulldogs in the third meeting between the teams, Puleo said, Adirondack has to "stay up, stay alive on the bench. Gotta hit. We're a lot better when we hit," especially early in games, he said, as the Wildcats' pitchers are better when they can pitch with a lead.