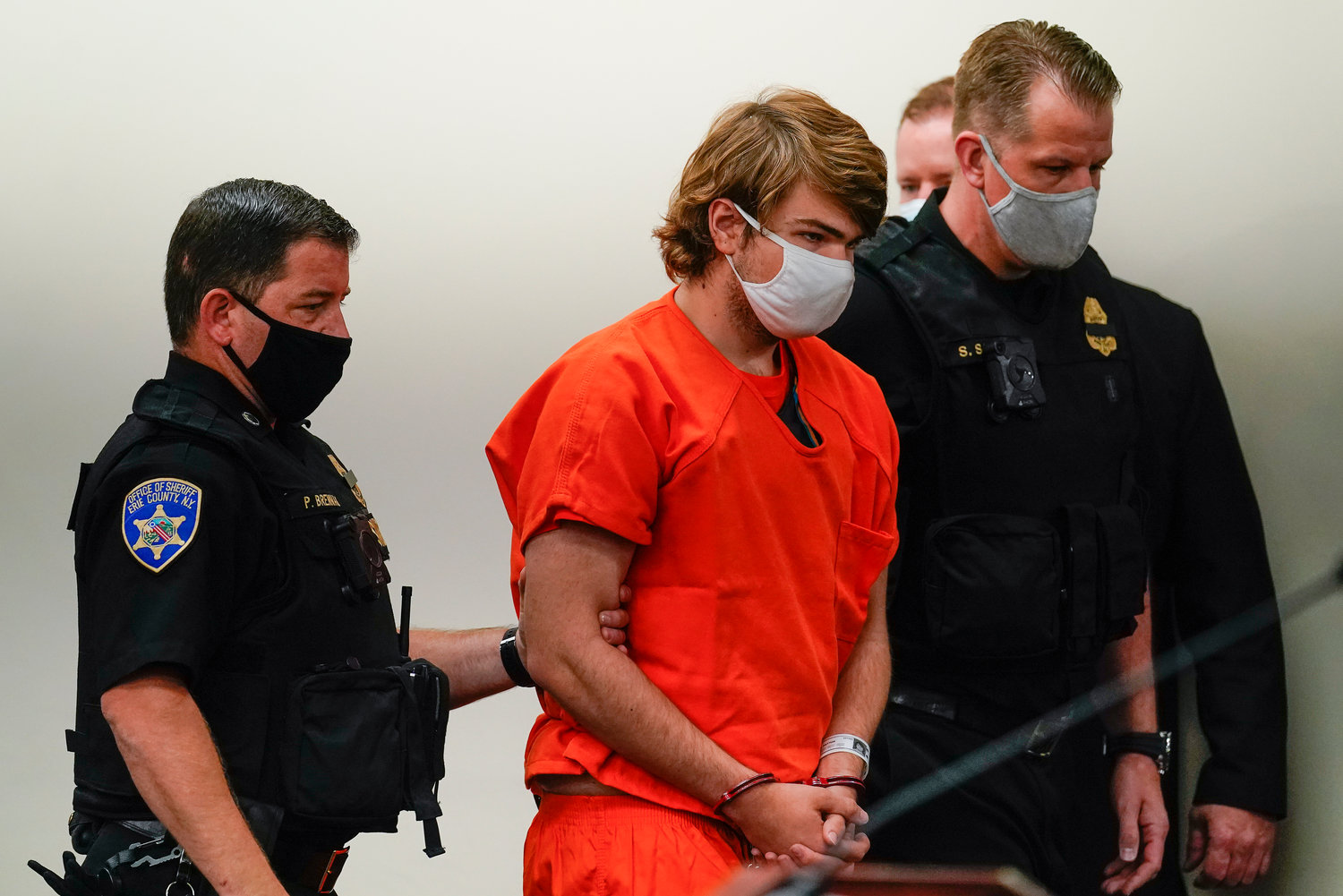 Payton Gendron is led into the courtroom for a hearing at Erie County Court, in Buffalo. Gendron faces charges in the May 14 fatal shooting at a supermarket.
(AP Photo) 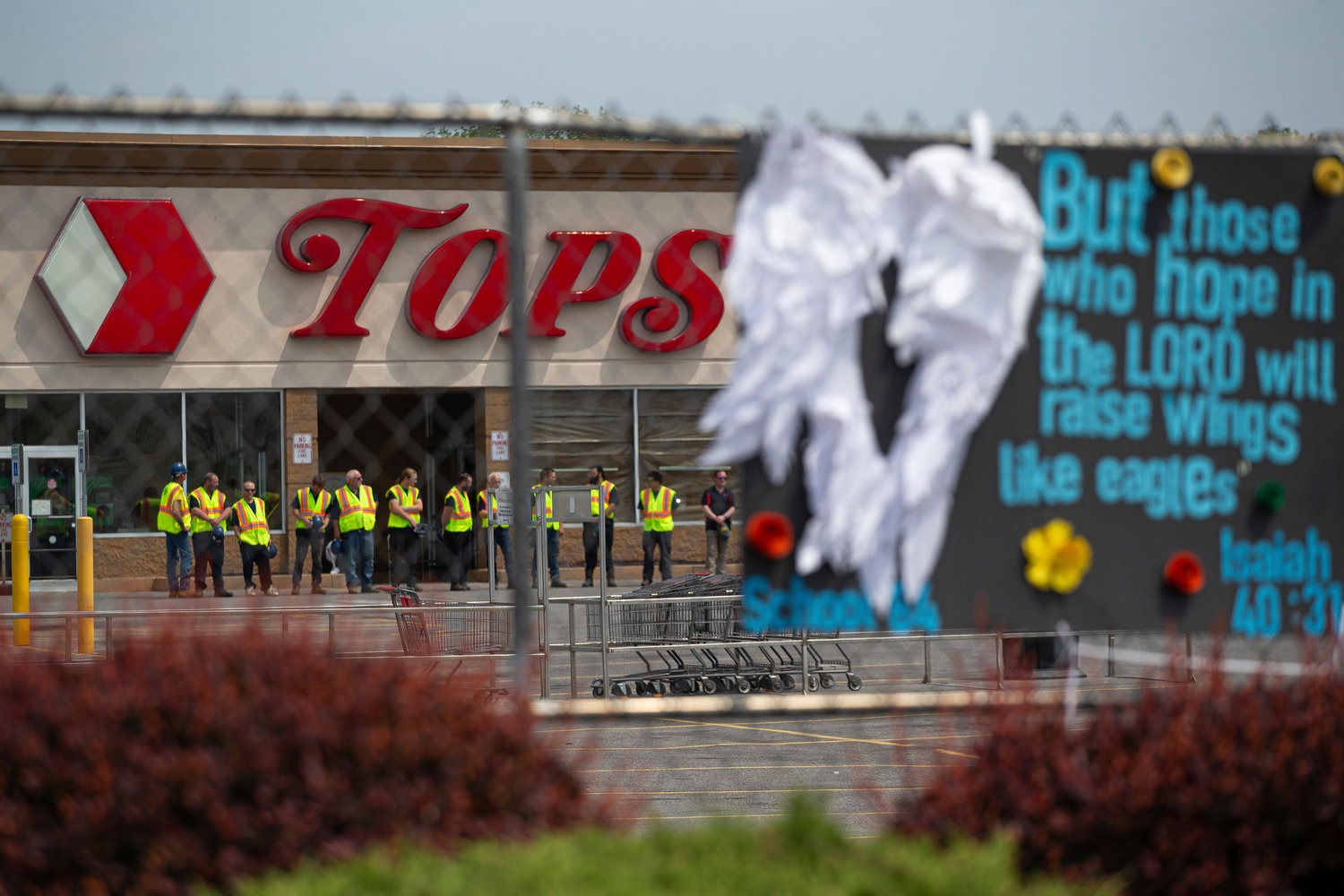 FILE - Investigators stand outside during a moment of silence for the victims of the Buffalo supermarket shooting outside the Tops Friendly Market on Saturday, May 21, 2022, in Buffalo, N.Y. Long before an 18-year-old avowed white supremacist inflicted terror at a Buffalo supermarket, the city's Black neighborhoods, like many others around the nation, had been dealing with wounds that are generations old. (AP Photo/Joshua Bessex, File)
AP 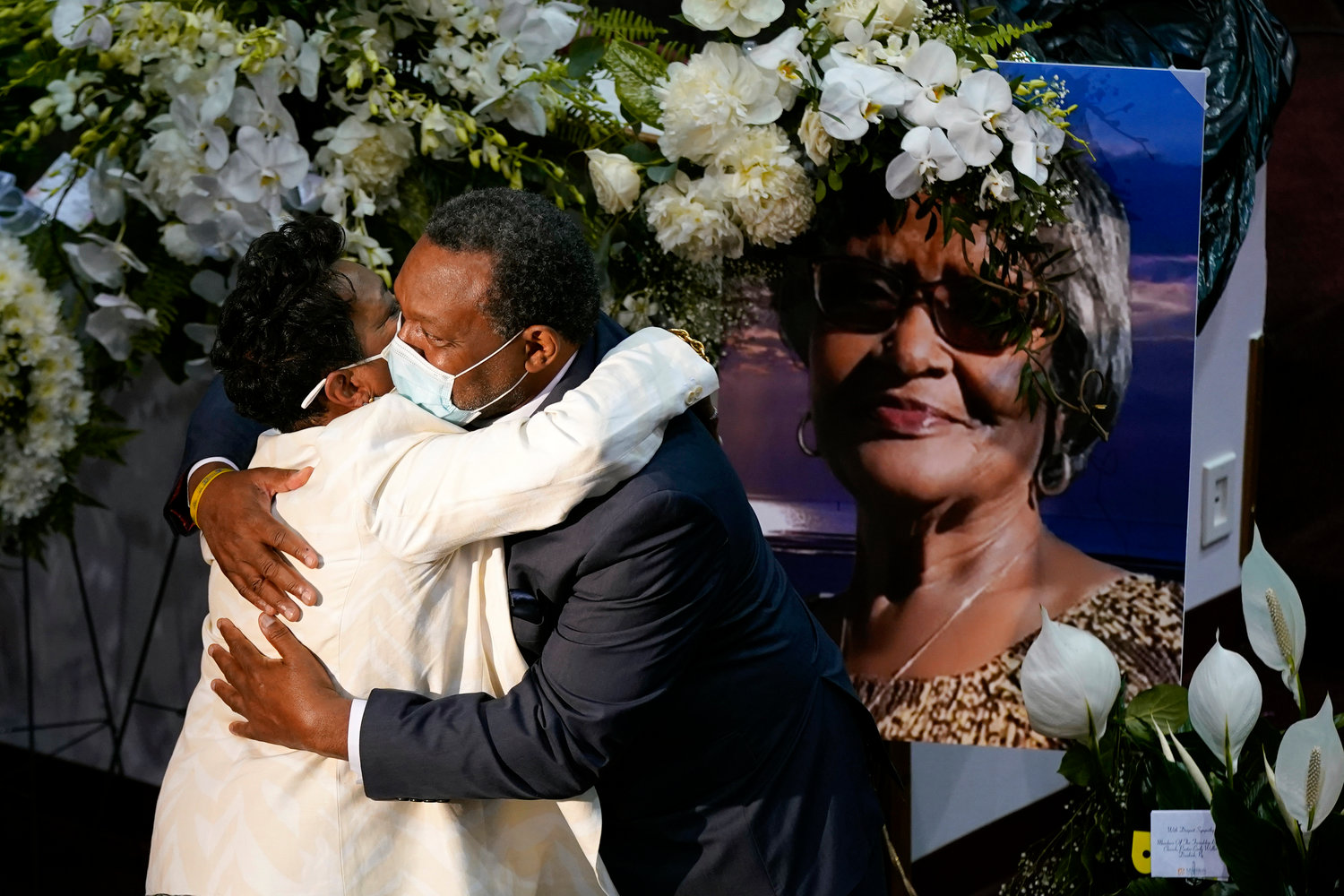 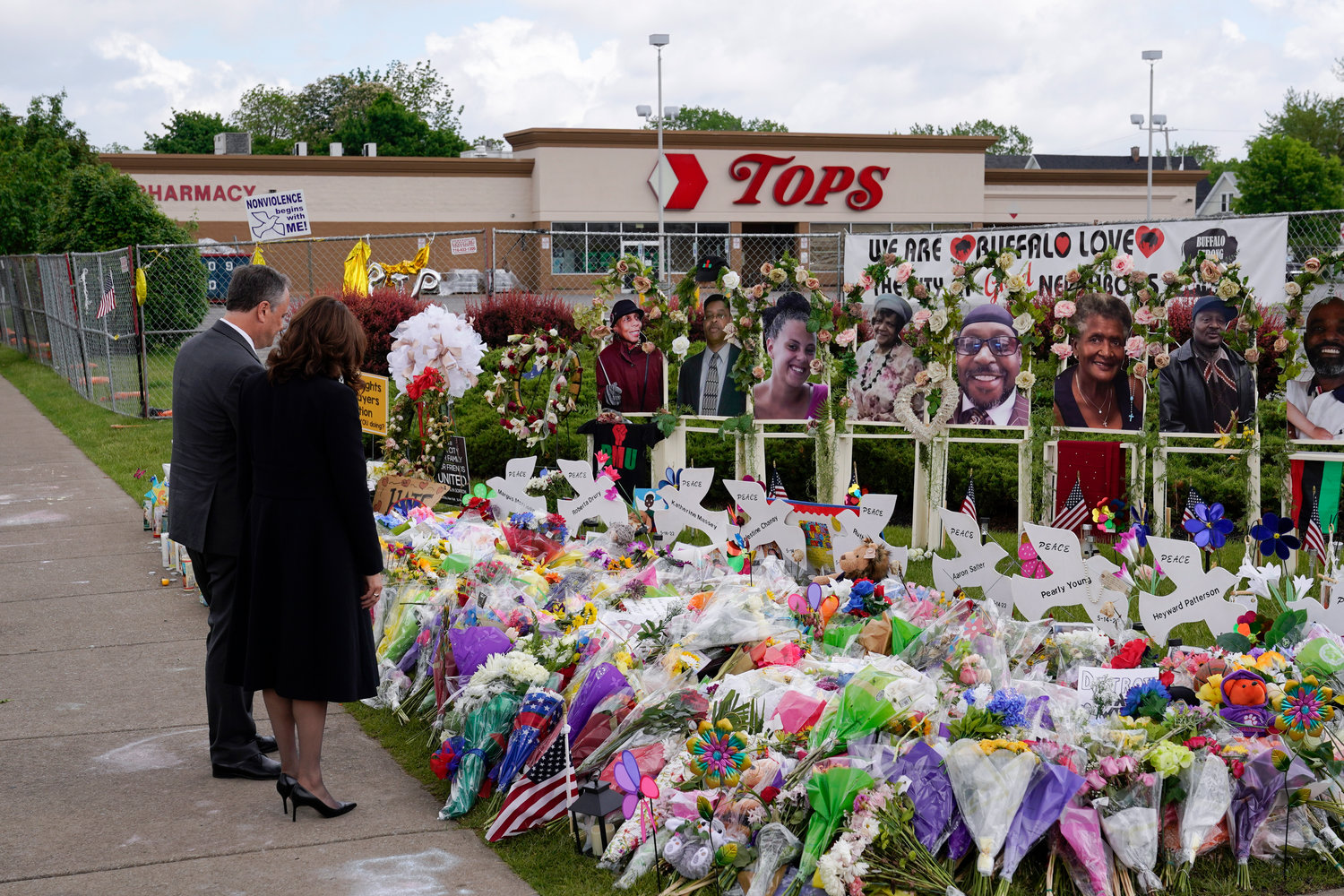 Vice President Kamala Harris and her husband Doug Emhoff visit a memorial near the site of the Buffalo supermarket shooting after attending a memorial service for Ruth Whitfield, one of the victims of the shooting, Saturday, May 28, 2022, in Buffalo, N.Y. (AP Photo/Patrick Semansky)
AP 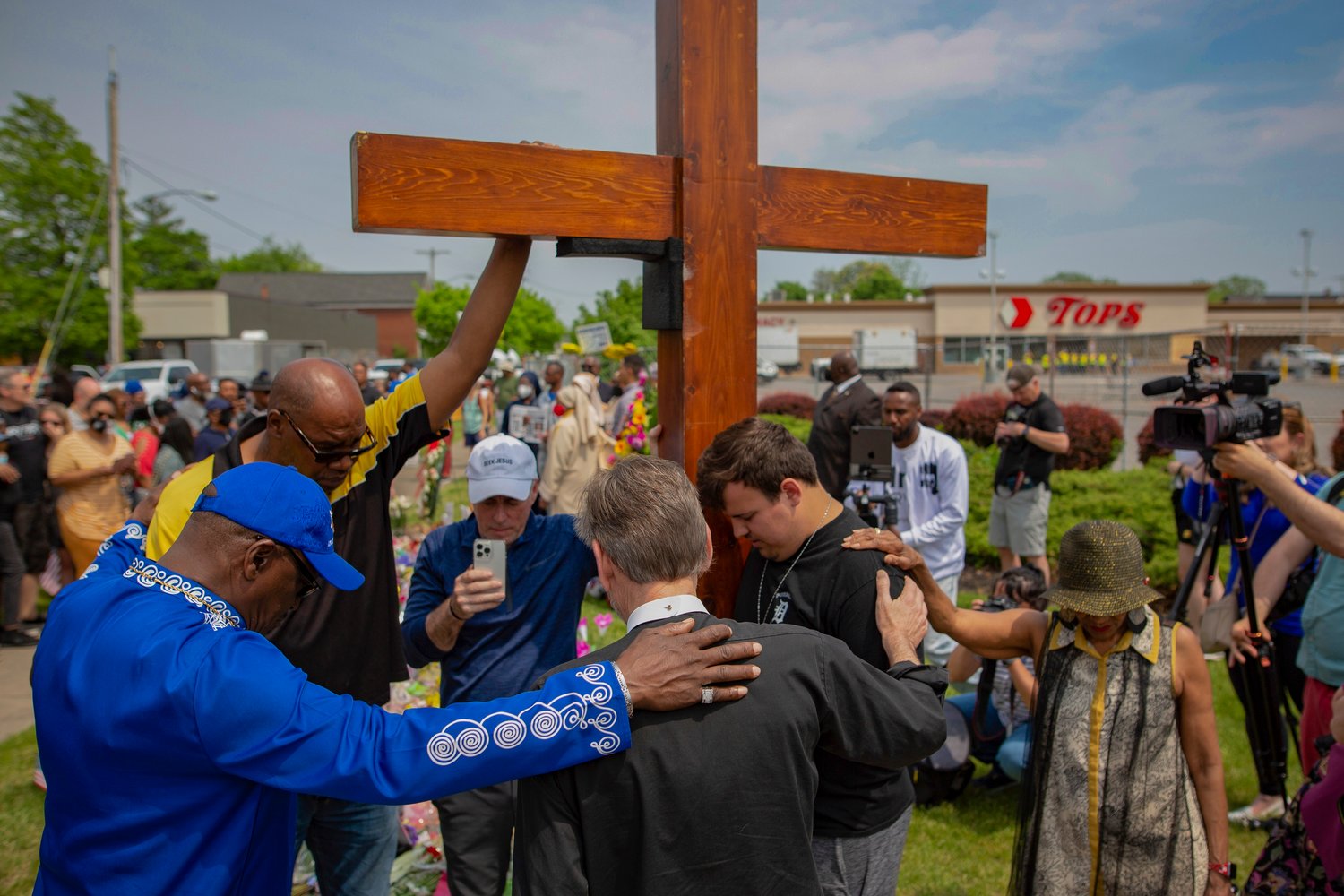 FILE - A group prays at the site of a memorial for the victims of the Buffalo supermarket shooting outside the Tops Friendly Market on Saturday, May 21, 2022, in Buffalo, N.Y. Funeral services are set for Friday for three of those killed: Geraldine Talley, Andre Mackniel and Margus Morrison. They are among the 10 people killed and three wounded May 14 when a white gunman opened fire on shoppers and employees at a Tops Friendly Market. (AP Photo/Joshua Bessex, File)
AP 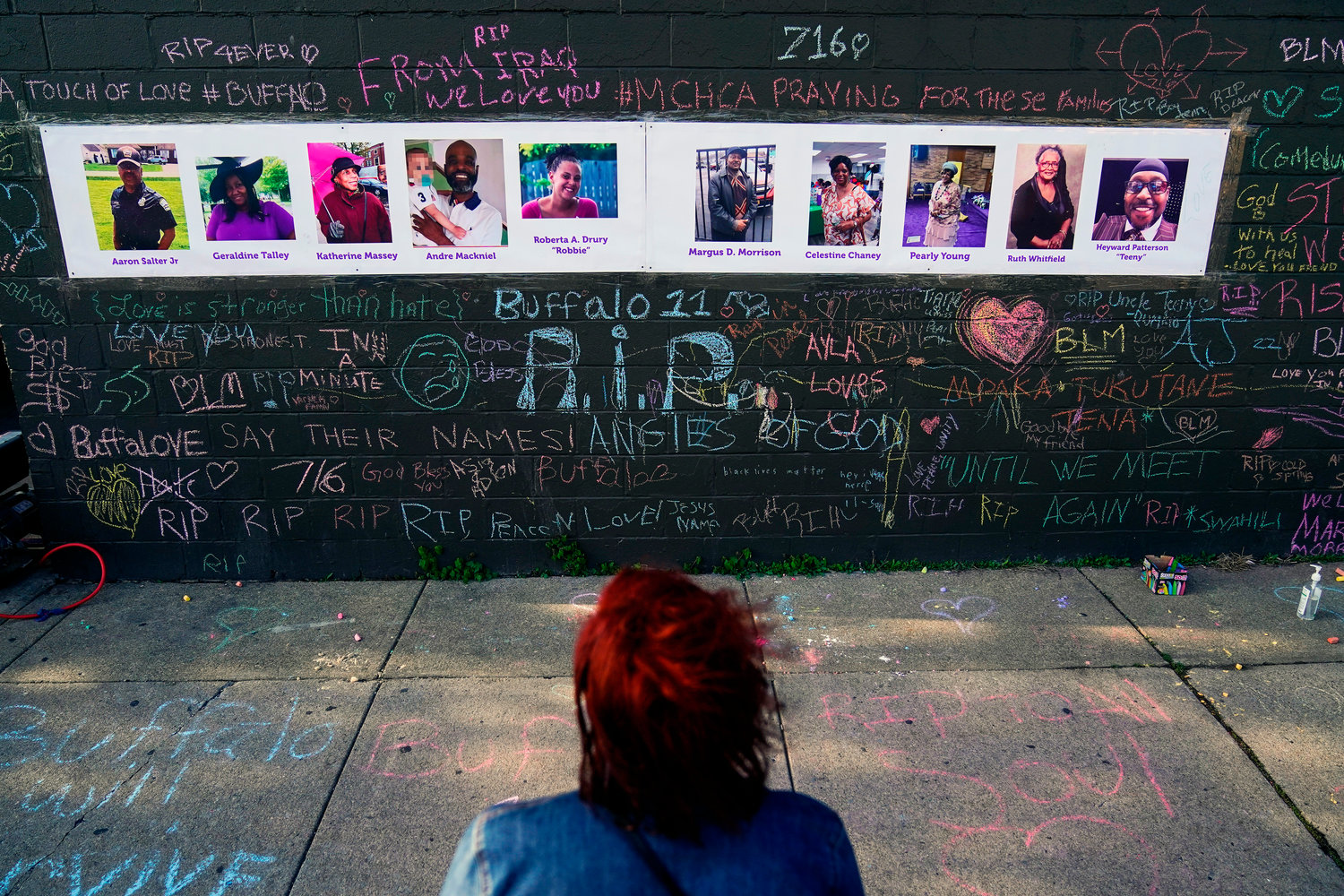 A person visits a makeshift memorial near the scene of Saturday's shooting at a supermarket, in Buffalo, Thursday, May 19, 2022. (AP Photo/Matt Rourke)
AP 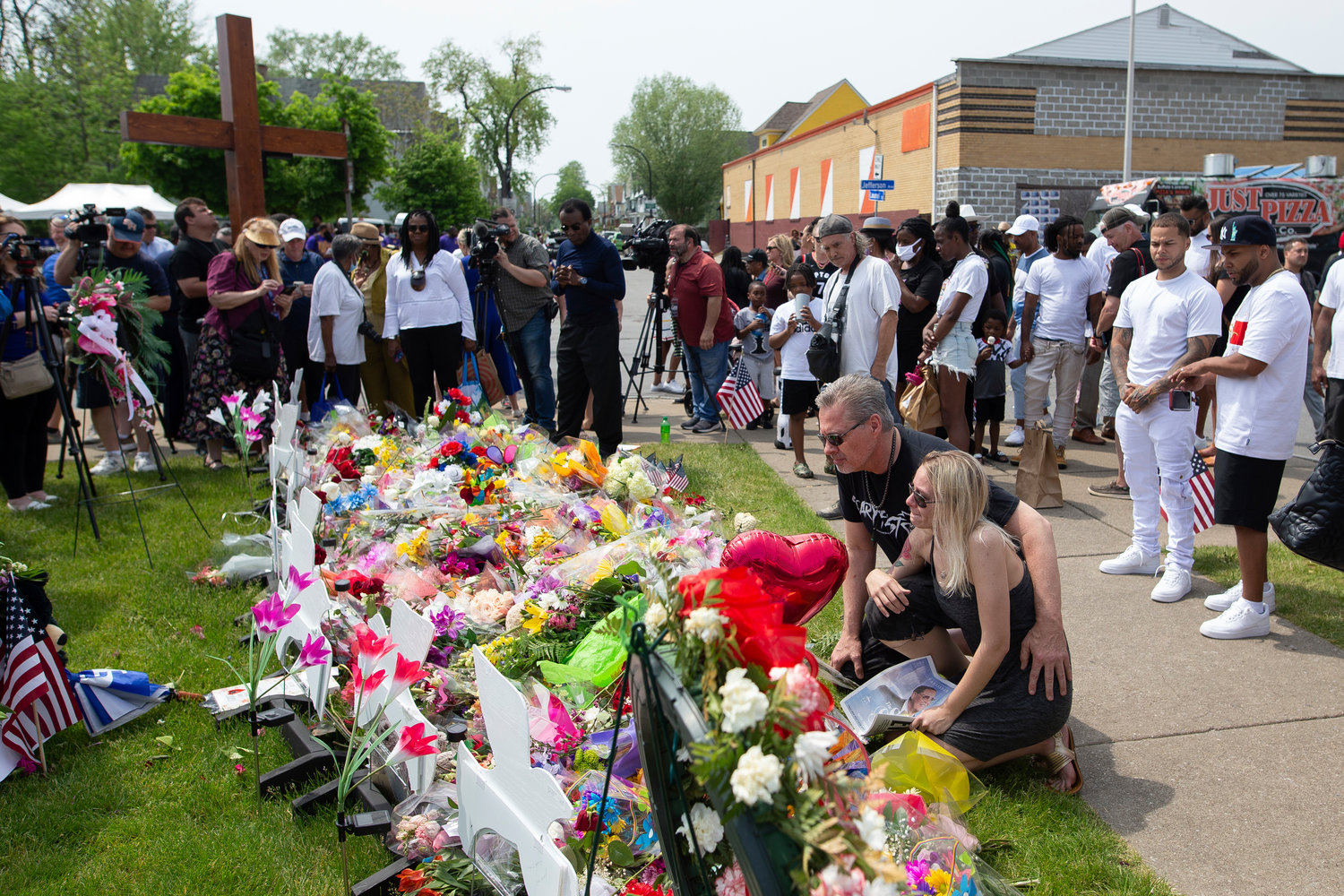 Michael Jordan and Heather Delorm, friends of Buffalo shooting victim Roberta Drury, visit a memorial for the victims of the Buffalo supermarket shooting outside the Tops Friendly Market on Saturday, May 21, 2022, in Buffalo, N.Y. Tops was encouraging people to join its stores in a moment of silence to honor the shooting victims Saturday at 2:30 p.m., the approximate time of the attack a week earlier. Buffalo Mayor Byron Brown also called for 123 seconds of silence from 2:28 p.m. to 2:31 p.m., followed by the ringing of church bells 13 times throughout the city to honor the 10 people killed and three wounded.(AP Photo/Joshua Bessex)
AP
Previous Next
Posted Wednesday, June 1, 2022 6:41 pm

BUFFALO (AP) — The white 18-year-old man accused of fatally shooting 10 Black people at a Buffalo supermarket was charged Wednesday by a grand jury with domestic terrorism motivated by hate and 10 counts of first-degree murder.

Payton Gendron, who has been in custody since the May 14 shooting, is scheduled to be arraigned Thursday in Erie County Court.

The 25-count indictment also contains charges of murder and attempted murder as a hate crime and weapons possession.

Gendron had previously been charged with first-degree murder in the shooting, which also injured three people. He has pleaded not guilty. Prosecutors told a judge May 20 the grand jury had voted to indict Gendron but did not disclose charges, saying proceedings were ongoing.

The domestic terrorism charge accuses Gendron of killing “because of the perceived race and/or color” of his victims.

Former Gov. Andrew Cuomo proposed the domestic terrorism hate crime law in August 2019, in the wake of a mass shooting targeting Mexicans at a Walmart store in El Paso, Texas. The measure, dubbed the “Josef Neumann Hate Crimes Domestic Terrorism Act” after an attack at a rabbi’s home in Munsey, New York, was signed into law on April 3, 2020, and took effect Nov. 1, 2020.

The charge, Domestic Acts of Terrorism Motivated by Hate in the First Degree, is punishable with a sentence of life imprisonment without parole.

Murder charges were filed for each of the victims, who ranged in age from 32 to 86 and included eight shoppers, the store security guard and a church deacon who drove shoppers to and from the store with their groceries.

The gunman, carrying an AR-15-style rifle he had recently purchased, opened fire on Saturday afternoon shoppers at the only supermarket in the predominantly Black neighborhood.

The shooting, followed 10 days later by a mass shooting that killed 19 children and two teachers inside a Uvalde, Texas, elementary school, has renewed a national debate about gun control and violent extremism.

Federal authorities also are investigating the possibility of hate crime charges against Gendron, who apparently detailed his plans and his racist motivation in hundreds of pages of writings he posted online shortly before the shooting. The attack was livestreamed from a helmet-mounted camera.

Gendron drove about three hours from his home in Conklin, New York, intending to kill as many Black people as possible, investigators have said.

His attorney, Brian Parker, said he had not seen the indictment and could not comment, adding that prosecution and defense attorneys have been barred by a judge from discussing the case publicly.