Get caught up on these recent varsity basketball games. 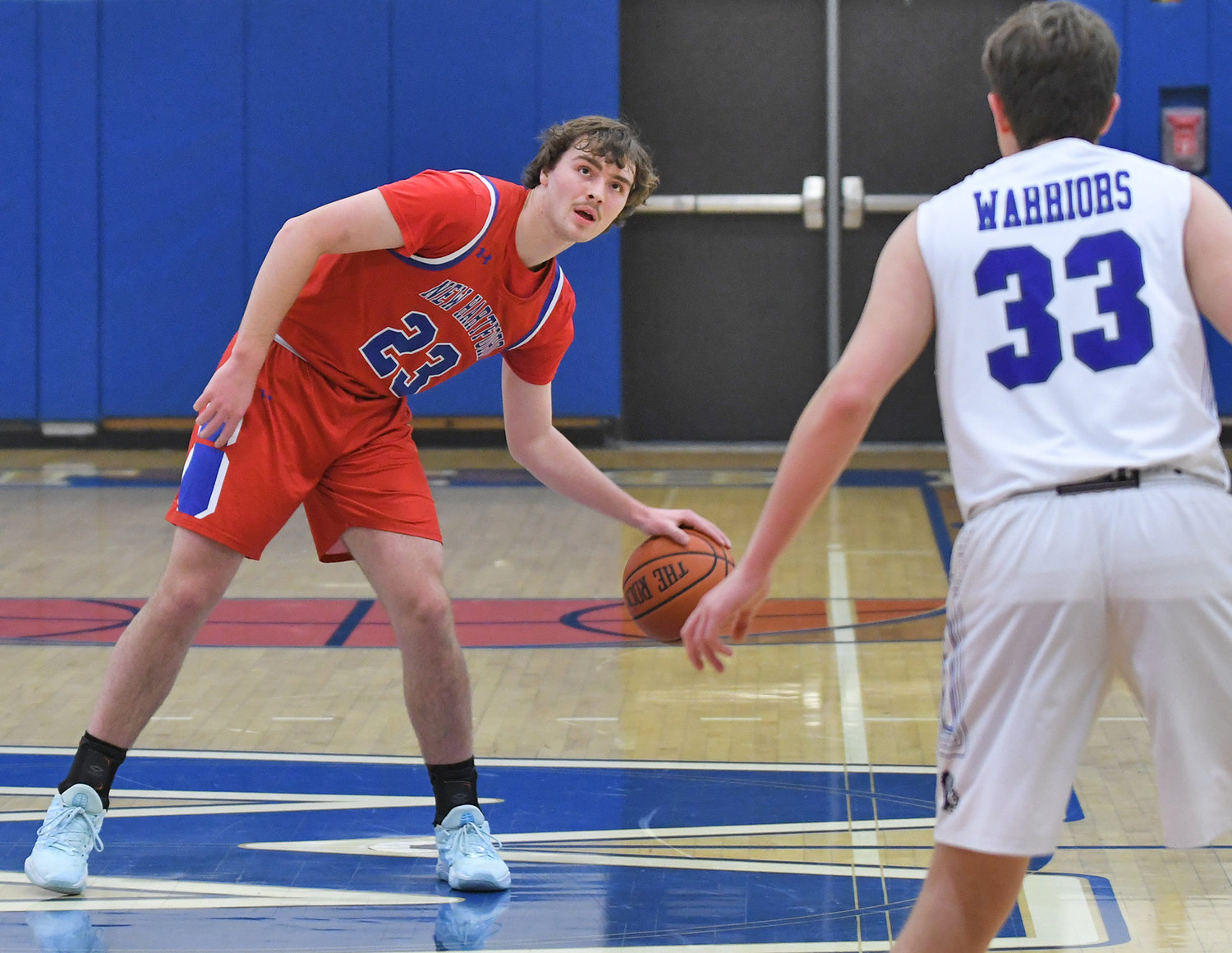 New Hartford’s Zach Philipkoski watches the clock for the last shot in the first quarter with Whitesboro’s Dan Russo guarding him Monday evening at Whitesboro High School. Philipkoski scored 17 and the Spartans got a 50-27 win on the road in the Tri-Valley League.
(Sentinel photo by John Clifford) 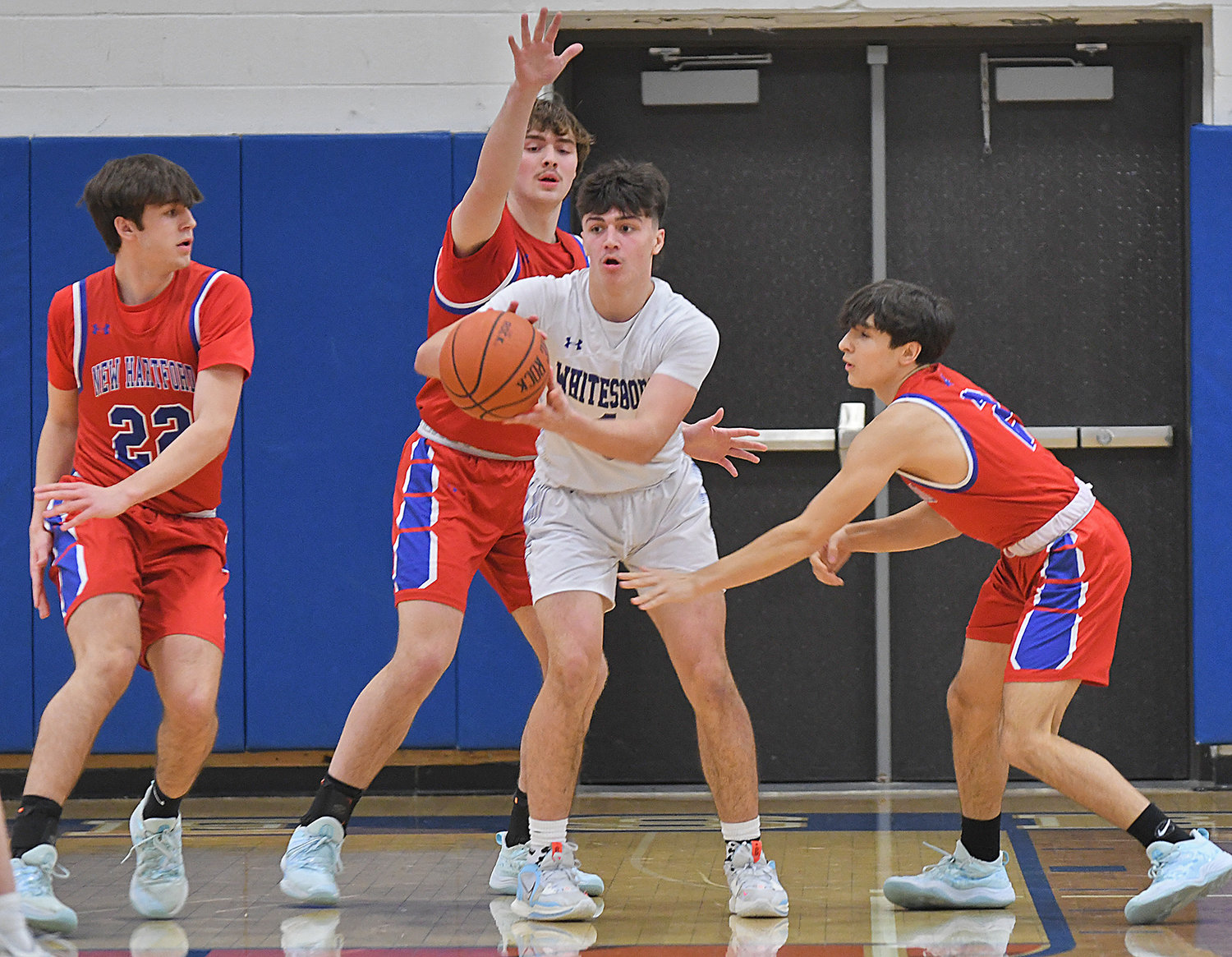 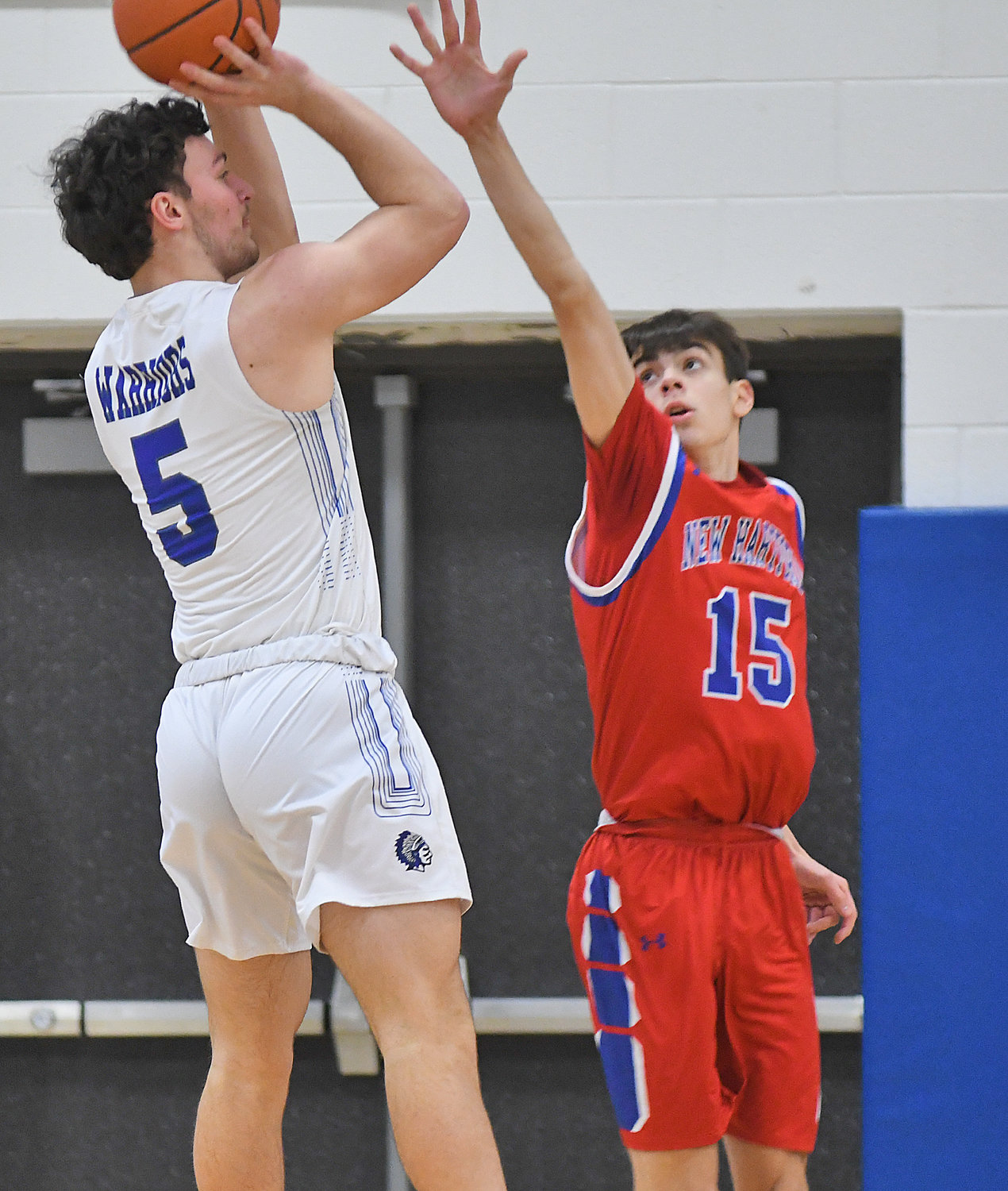 Kyle Meier of Whitesboro takes a shot with New Hartford defender Jameson Stockwell getting a hand out Monday night at Whitesboro High School. Meier led his team with 11 points and Stockwell led his with 19. New Hartford won 50-27.
(Sentinel photo by John Clifford) 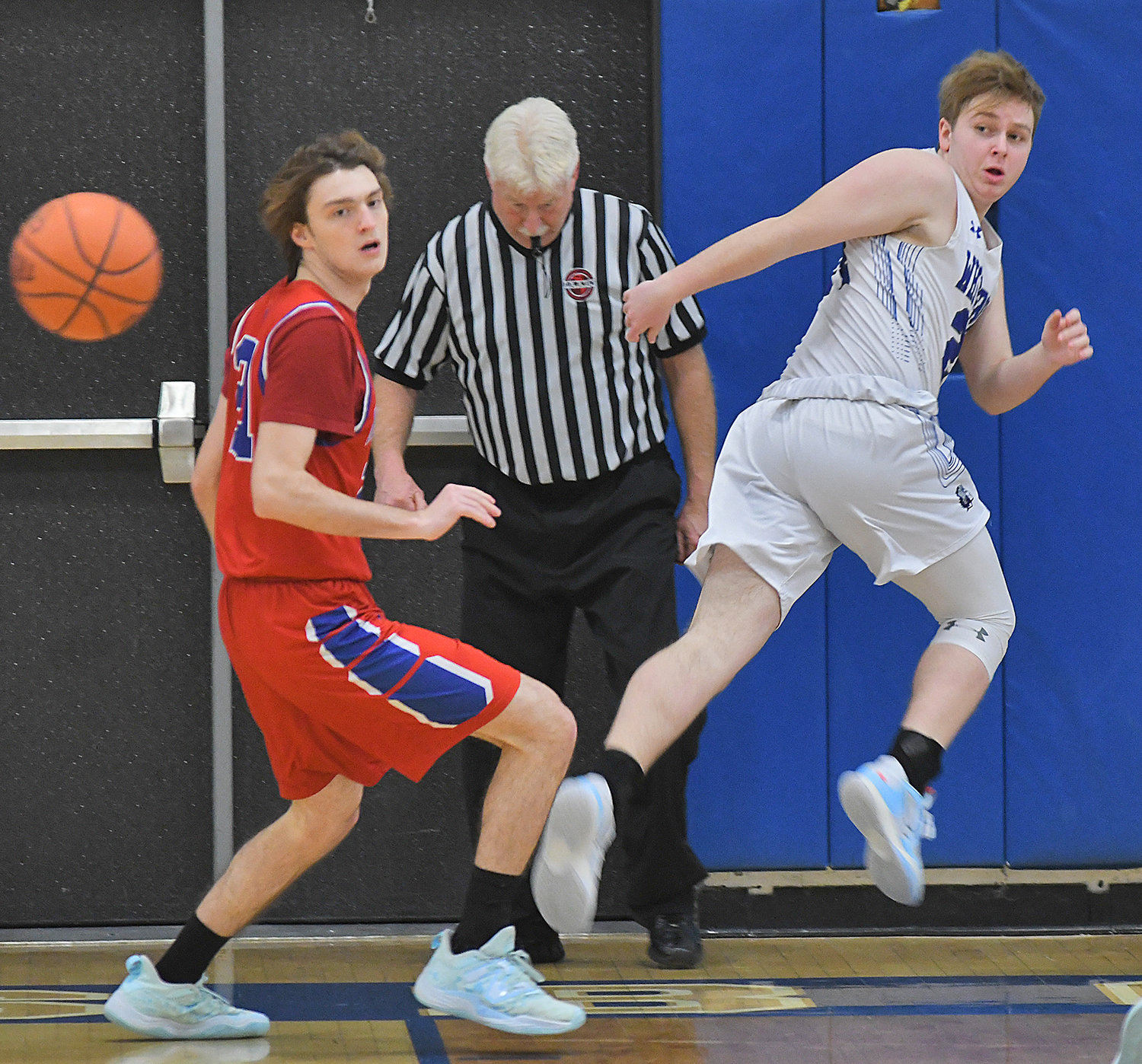 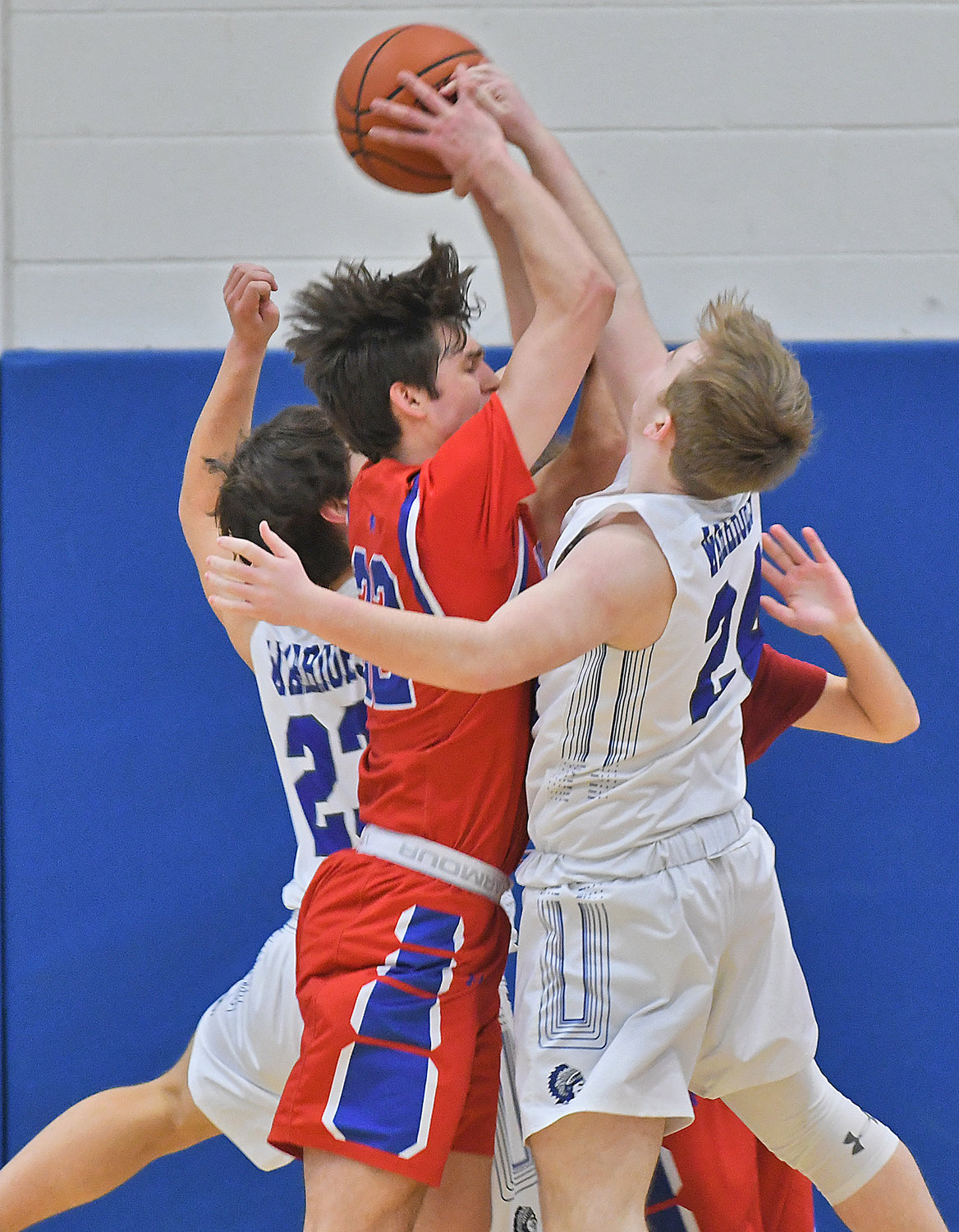 New Hartford's Colton Suriano gets tied up by Whitesboro's Ty Montrose, left, and Jason Roberts in the first half Monday at Whitesboro High School.
(Sentinel photo by John Clifford) 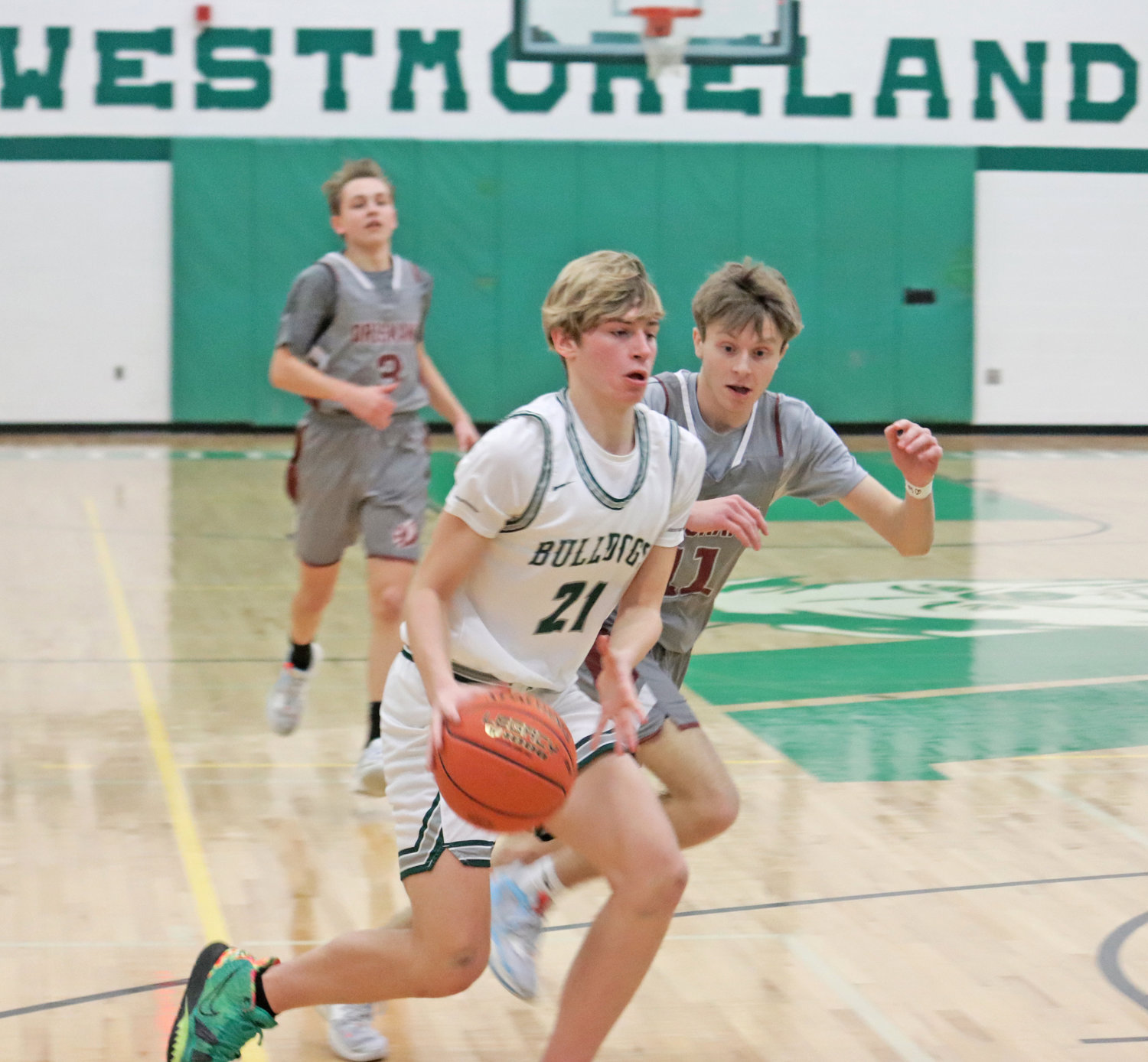 Westmoreland’s Bryan Doyle heads toward the basket as Oriskany defender Jack Tamburino closes in. Doyle led the Bulldogs with 17 points but Oriskany got the win Monday on the road, 54-42.
(Photo courtesy of Gary Dillon) 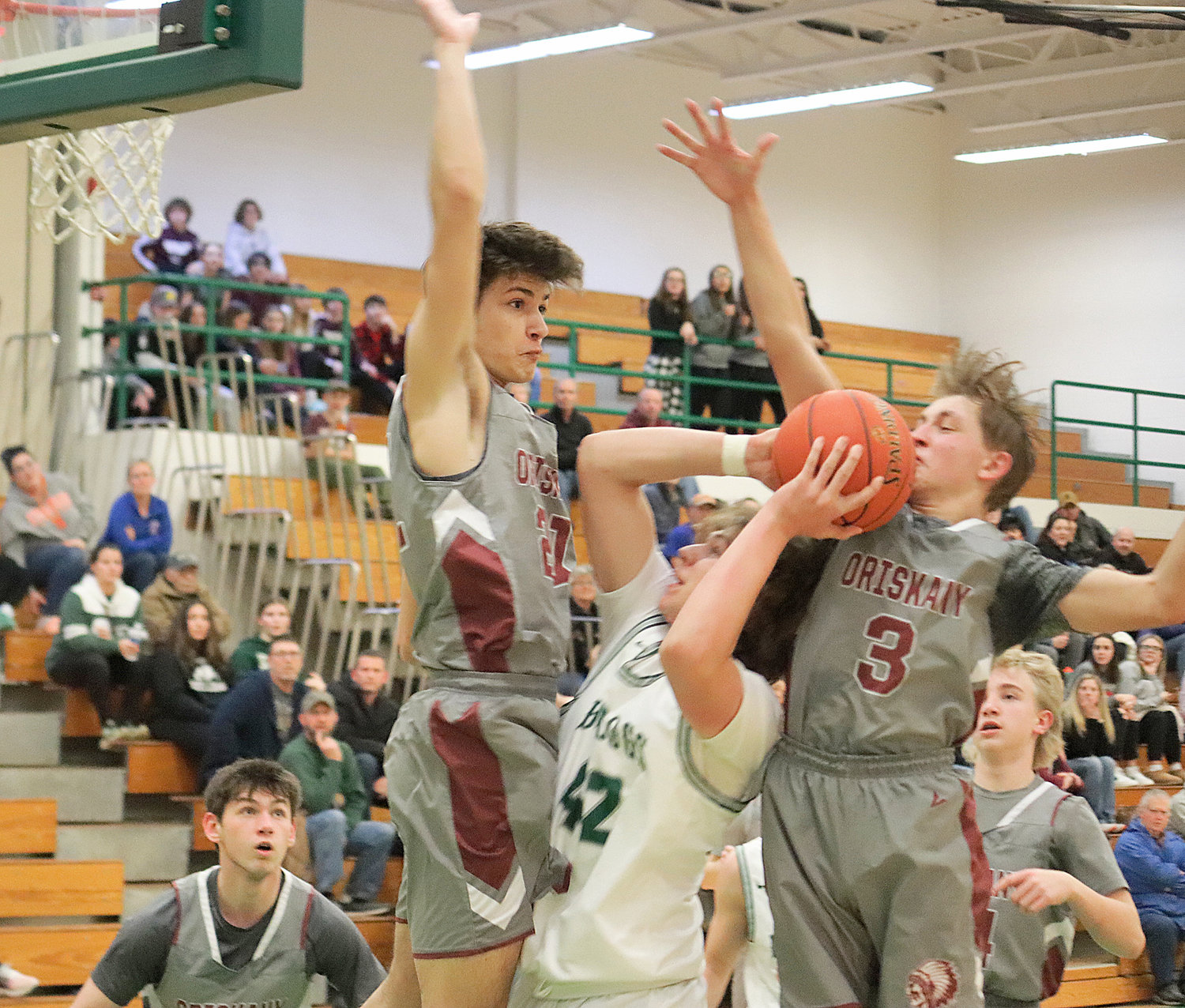 Mitchell Holmes of Westmoreland tries to get a shot off while sandwiched between Oriskany defenders Karsten Bates, left, and Anthony Kernan. Oriskany won 54-42 at Westmoreland Monday.
(Photo courtesy of Gary Dillon) 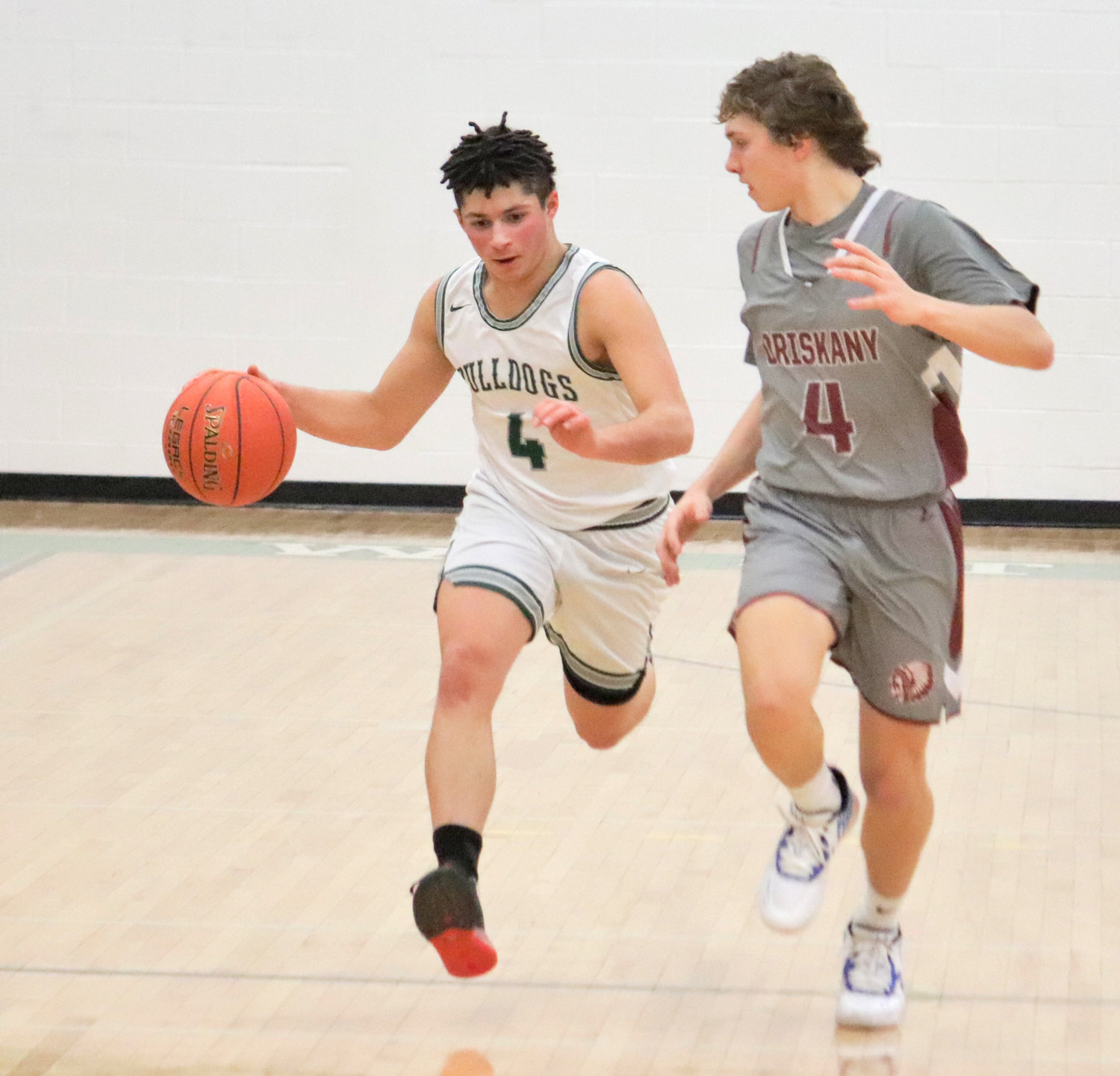 Anthony Sawanec of Westmoreland pushes down the court against Oriskany's Nick Hays Monday at home. Sawanec had six points and four rebounds but the Bulldogs lost 54-42 Monday.
(Photo courtesy of Gary Dillon)
Previous Next
Posted Wednesday, January 18, 2023 9:27 am

Jameson Stockwell and Zach Philipkoski combined for 36 points as the New Hartford boys basketball team earned a 50-27 win at rival Whitesboro in the Tri-Valley League Monday.

Entering Tuesday, Philipkoski was four points from 1,500 in his career, having recently become the program’s all-time scorer. Colton Suriano had five points but grabbed a dozen rebounds, dished out five assists and had three steals as well.

The Spartans led 19-11 after a quarter and built that to a 13-point halftime lead.

Whitesboro’s leading scorer was Kyle Meier with 11 points. He also had eight rebounds.

New Hartford (7-5) was scheduled to host Central Valley Academy in the TVL Tuesday. Results were not available at press time.

Whitesboro (4-8) was scheduled to host Oneida in the league Tuesday. Results were not available at press time.

Oriskany’s Nick Hays led the way with 16 points in the win.

Oriskany (7-2) hosts Dolgeville at 7 tonight in the league.

Two double-doubles for Warriors in win

Abby Hemstrought and Eva Gaetano both collected double-doubles for the Clinton girls basketball team in a 50-40 win at home over Sauquoit Valley in the Center State Monday.

Hemstrought led her team with 16 points and also had 10 rebounds, six assists and four steals. Gaetano scored 15, grabbed a dozen rebounds and added three steals and a pair of assists.

Statistics for Sauquoit were not provided.

Clinton (4-6) travels to Waterville at 7 p.m. Thursday in the league.