Recently, a caravan of semi-trucks cruised through downtown Utica, hauling sets, costumes, sound systems, and other production equipment to The Stanley Theatre. 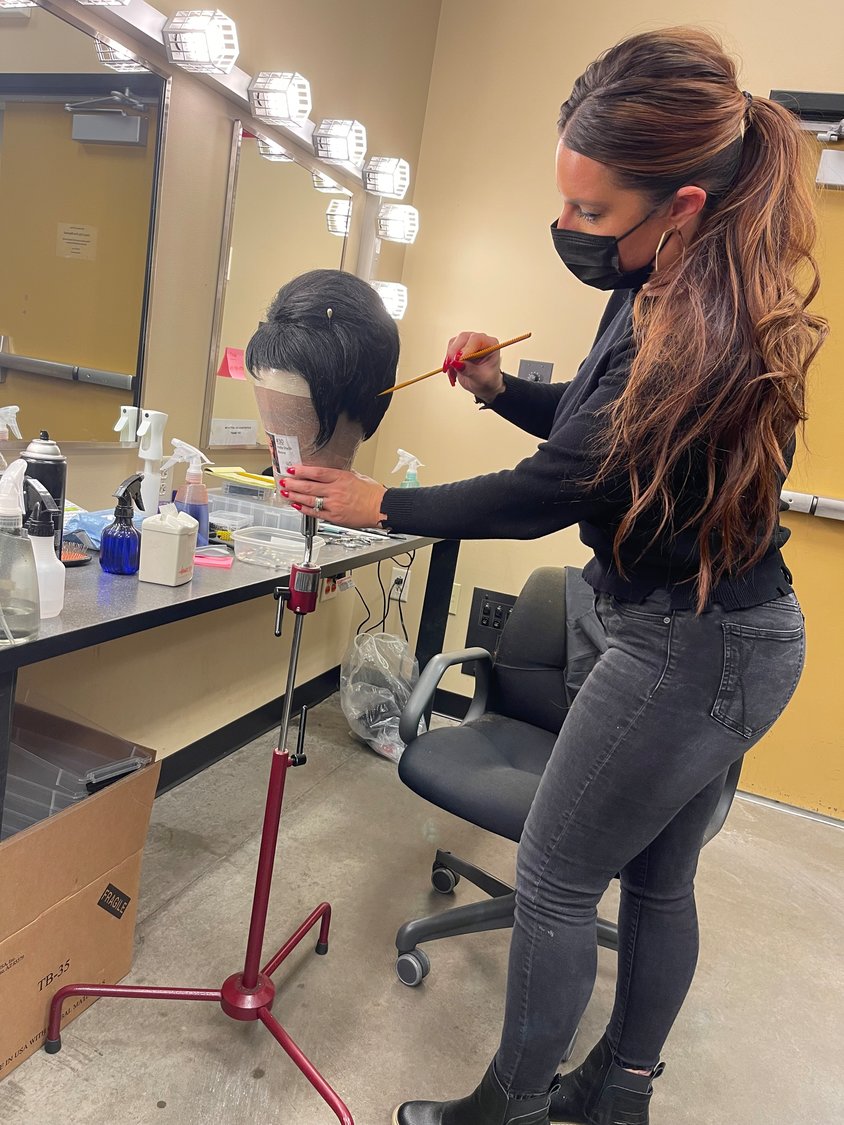 Hairdresser Christina Damiano works on set for the Broadway Theatre League of Utica’s two-day tech production of The Book of Mormon. Along with being a cultural catalyst for the community, Broadway Utica has also been a strong economic driver, contributing more than $1.7 million to the economy over the past five years.
(Photo courtesy of Tennille-Lynn Millo)
Tennille-Lynn Millo, Special to the Daily Sentinel

A couple of weeks ago, a caravan of semi-trucks cruised through downtown Utica, hauling sets, costumes, sound systems, and other production equipment to The Stanley Theatre for Broadway Theatre League of Utica’s two-day production of The Book of Mormon.

Arriving two weeks before its highly anticipated debut, the cast and crew stepped out of their big rigs and took in the sights and sounds of the area that would become their home and workplace for the next 14 days.

While local residents strolled past and struggled to get a glimpse of the latest creative endeavor to grace the Stanley’s stage, businesses rolled up their sleeves, anticipating the show’s dramatic, trickle-down impact.

The Book of Mormon isn’t your typical Broadway show. A nine-time Tony award-winning performance, The Book of Mormon is a satire that follows two Latter-day Saint missionaries as they attempt to preach the faith of the Church to the inhabitants of a remote Ugandan village. Grossing more than $700 million, and seen by nearly four million eople, the 14th longest-running musical on Broadway is already set to become Broadway Utica’s highest-grossing show in its 65-year history – giving Mohawk Valley a lot to gain.

“The Book of Mormon is our first tech show of the 2022-2023 season, which means it’s literally built from the ground up,” said Danielle Padula, executive director of Broadway Utica said. “Unlike other shows that are in town for a few days, our tech shows move into the area for several days or weeks and require all departments, including casting, lighting, set design, hair, and wardrobe to come together and rehearse and run through the show for several hours each day.”

“That is a huge factor in the city since tech crews utilize its hotels, restaurants, banks, and shops,” Padula added. “Becoming the home of a tech show is also very attractive for our patrons as we become the launching point for The Book of Mormon’s tour, which gives our ticket holders an exclusive premiere. It also puts Utica’s name on the map.”

Along with being a cultural catalyst for the community, Broadway Utica has also been a strong economic driver, contributing more than $1.7 million to the economy over the past five years. Nearly 70% of each show’s budget is spent on hospitality, accommodations, advertising and promotion, and theater and equipment rentals.

“That percentage does not include the amount of money our patrons spend at local restaurants, bars, or lodgings when they attend a show,” Padula said.

ITEA Local 1, a labor union for the theatrical industry, has been providing outside assistance for area shows for more than 22 years. A staple when it comes to filling theatrical positions, ITEA prides itself on recruiting skilled laborers, set and lighting designers, wardrobe consultants, and hairdressers as shows come into town.

“People tend to look at the arts and see the work that’s in front of them. I see jobs – truck drivers and welders, hairdressers and wardrobe designers, loaders and set designers, and lighting and sound specialists. There’s so much that goes into any performance, and while a lot of what we see onstage is from outside our area, much of what surrounds that has a local connection. For The Book of Mormon, that connection included the employment of 59 people,” said Joe Fanelli, president of ITEA Local 1.

Among the loading crew and lighting designers comes the pool of talent Fanelli spends his time scouting locally.

Christina Damiano, a hairstylist at Posh Salon in New York Mills and stylist for The Book of Mormon, grew up in theater. Seated in the velvet rows at the age of five, Damiano memorized the songs and fell in love with an art form her mother held dear, which made her an ideal fit when an extra hairstylist was needed for Hairspray last season.

“This is the closest I’m going to get to something like Broadway, so it’s meaningful,” Damiano said. “I’m backstage steaming wigs and curling hair while singing along with the actors. It’s a different life from the salon. There’s so much happening around you with set design and rehearsals. You’re meeting people from all over the world and are enmeshed in theatrics. For me, that’s everything.”

“My love for theater and my love of hair have come together in a unique way, and I wouldn’t have this opportunity if shows like these weren’t coming to our area. And, who knows, maybe one day I might find out I had a great conversation with the next great actor while working on The Book of Mormon,” she said.

Harley David is another talented find that Fanelli worked to bring to The Book of Mormon. The owner and fashion director of Harley David LLC, David has worked in costume design for local productions with Utica University, and on the runways for fashion shows in New York City.

“The work I do with The Book of Mormon is similar to the runway in theory. I’m stitching and tending to quick mends and prepping actors in wardrobes before they jet onto the stage, yet there’s this ambiance around the theater that separates the two,” David said. “It’s been a wonderful opportunity to be invited to a show and work beside creative, like-minded people. It brings a new aspect to my work and mindset.”

There will be a lot of excitement as The Book of Mormon premieres this weekend, but the repercussions are already being felt before the actors take the stage. From engaging conversations with local residents at area eateries to the job prospects for employment, the shows are a catalyst for much more than the arts — both on and off the stage.