At the Boonville-Oneida County Fair Cattle Show, it’s so “moo-ch” about family. 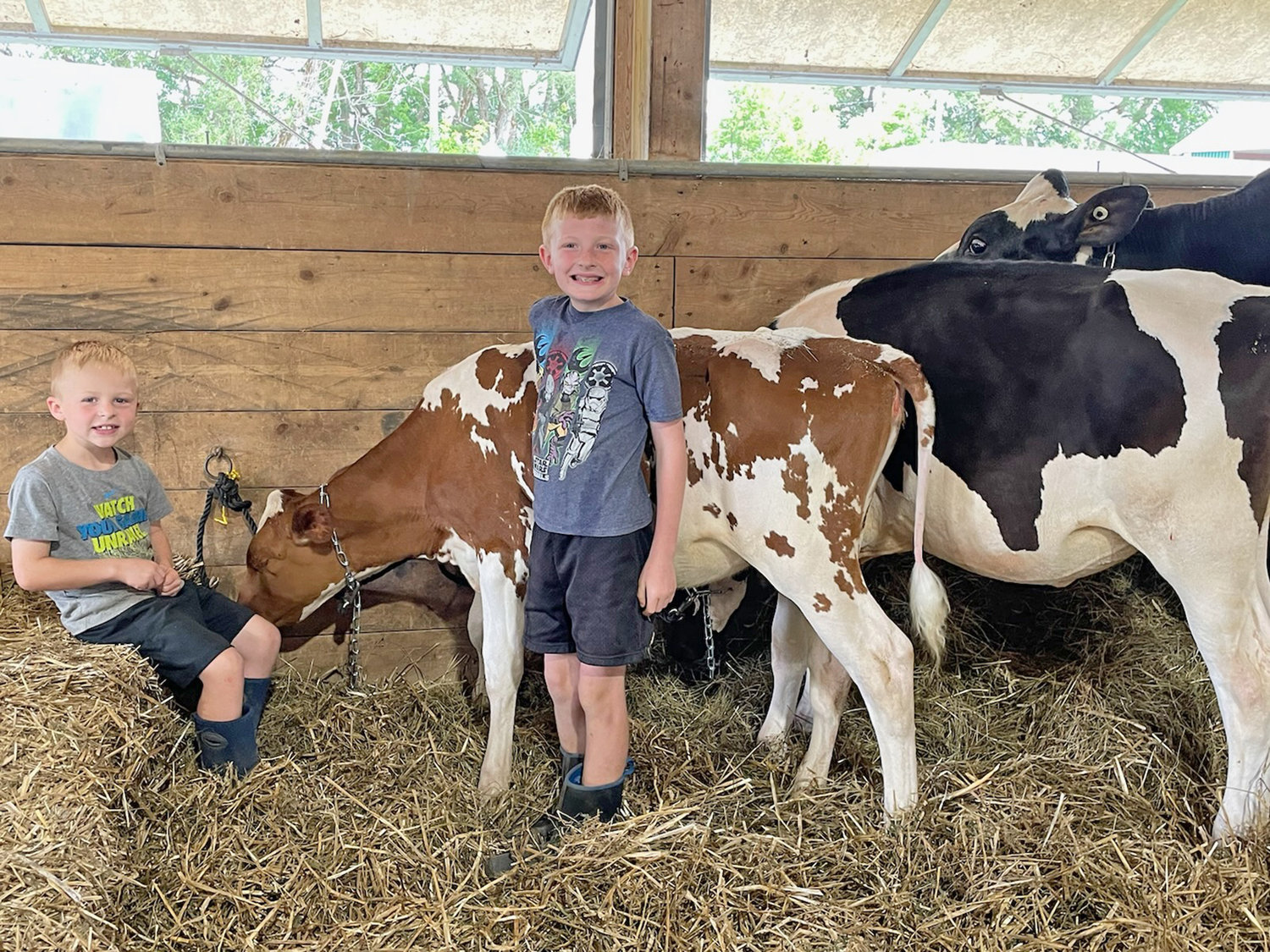 Landon Willson, 6, and brother Chase Willson, 9, show off a prized cow that is competing, and on show at the Boonville-Oneida County Fair. Both represent By-Design Farm in Ava. Their mother Brianne Willson said participating in the county fair each year allows the opportunity to pass down farming to the next generation.
(Sentinel photo by Nicole Hawley) 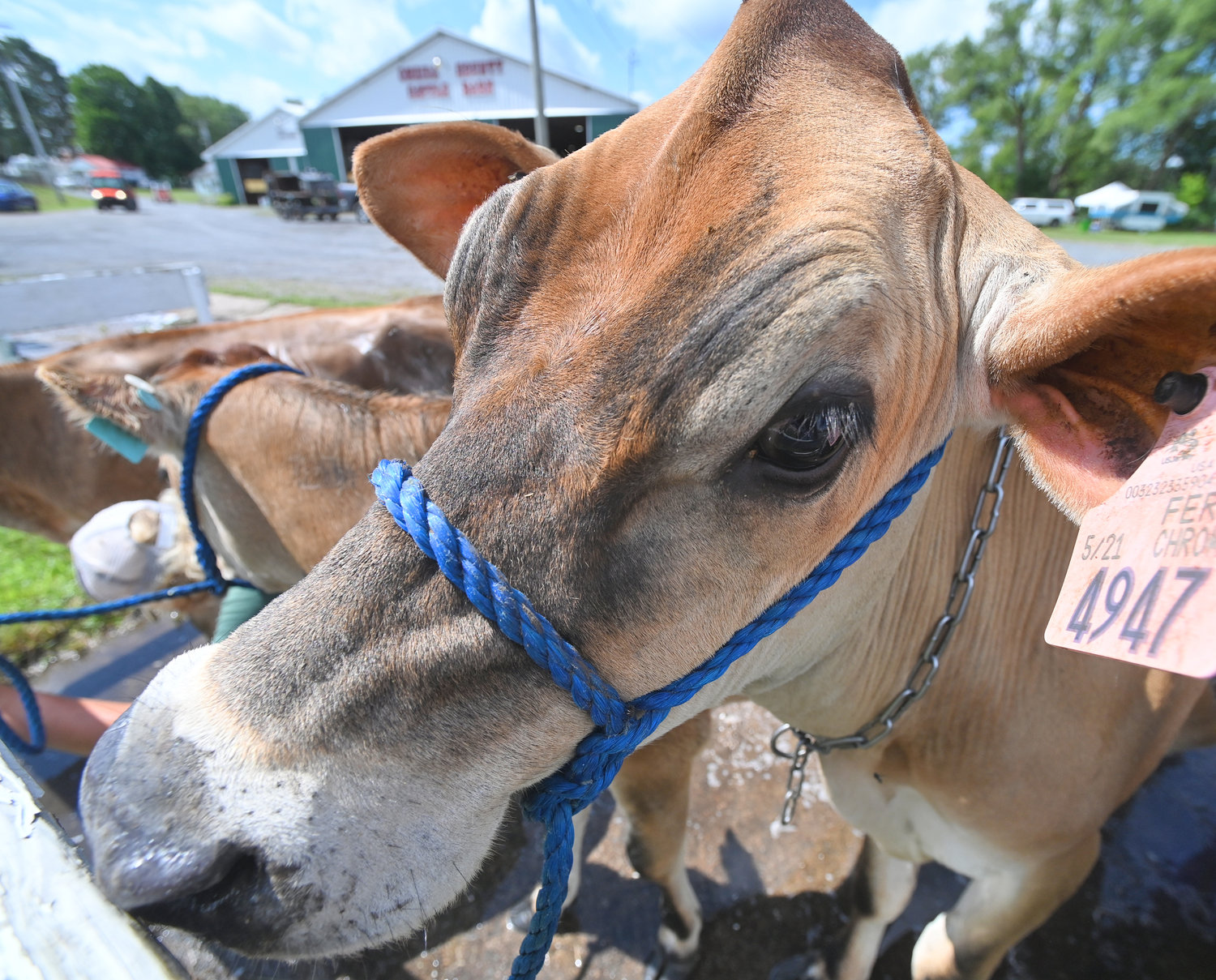 A brown Swiss cow has "her eye on the prize" as she awaits her turn to get washed up for the Boonville-Oneida County Fair this week.
(Sentinel photo by John Clifford) 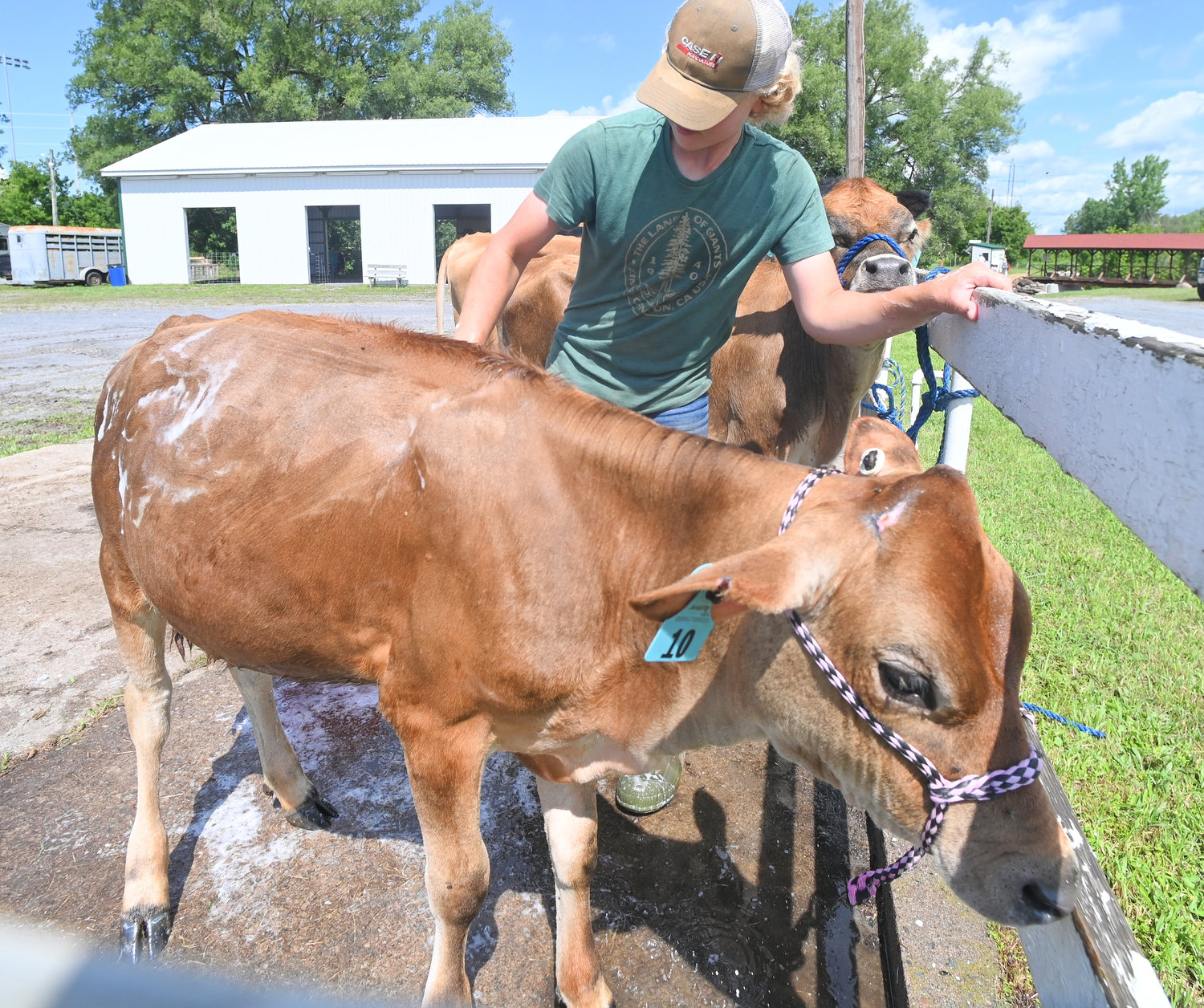 Elliott Meays, 15, cleans up a brown Swiss calf named Molly on Monday at the Boonville-Oneida County Fair. The fair officially started on Tuesday and runs through Sunday.
(Sentinel photo by John Clifford)
Previous Next
Posted Wednesday, July 27, 2022 7:19 am
Nicole A. Hawley and Jack Elliott, Sentinel Media
BOONVILLE — At the Boonville-Oneida County Fair Cattle Show, it’s so “moo-ch” about family.
Brianne Willson, of By-Design Farm on Sly Hill Road in Ava, had her sons Chase, 9, and Landon, 6, with her at the fair Tuesday on Opening Day, along with their five holsteins and brown Swiss cow. They have a total of about 70 cows back on the farm.
“They are the kids’ cows,” said Willson of the cattle they were showing at the fair. “We’ve been coming to the Oneida County Fair since 1995, so this is our 27th year.”
While Willson was participating in the fair back when she was a kid, she said showing cattle at the county fair was an introduction toward passing down their livelihood to the next generation.
“It’s generational — now the kids help out in the barn every day before school, and even after school,” she said.
Willson explained there are two different competitions for cattle at the fair:
• The Showmanship Competition: It gives an opportunity to portray the skills learned while caring for your livestock and the preparation made for competition, including how to properly walk a cow.
“You have to tailor it (walking) to hide the flaws of your cow and show off its strengths,” Willson explained. “They are judged on cleanliness too. You have to know your cow and know how to set her up.”
• The Conformation Class: Compares the animal to its breed standard, similar to a dog show. All the judges have different tastes, Willson said, but all are looking for the perfect cow to win. She said it’s quite comparable to a beauty pageant.
Before they’re shown, Willson said the children need to bring their cattle to the ring to be properly cleaned and groomed.
While farmers who participate in the Oneida County Fair Cattle Show don’t need to qualify in order to move on to the State Fair in Syracuse at the end of the summer, Willson said her family prefers their local fair for now, in comparison to the high competition and expense of participating at the state level. They previously had shown their cattle nationally, and even internationally.
Joy Starling, of Par Four Farms in Lowville, Lewis County, was at the fair with family members and son Jonathan, who will be a senior in the fall at Lowville Academy. Like Willson, Starling shared that she spent her childhood participating in the Boonville-Oneida County Fair, having grown up in Lee Center.
She recalled the days of spending fair nights in the back of her family’s station wagon, where these days, the Starlings bring along their truck-pulled trailer for a more comfortable night’s sleep. Her family started participating in the fair back in 1976.
Starling remembered when the Oneida County Fair had two full barns of holsteins and other cattle for show, “but the numbers are not as good now.”
Starling said just in the area where she grew up, there used to be at least a dozen farms, but now there’s only 1 or 2. It’s a different situation in Lewis County, she said.
“In Lewis County, the cows out-number the people,” she said. “We wish we could get more people interested in livestock showing here.”
The Starlings were showing nine cows in all at the Boonville-Oneida County Fair — holsteins and jerseys. She added that being at the Oneida County Fair was like attending a family reunion because it’s often the only time each year they get to see fellow farmers they’ve made friends with over the years.
As for the livestock — “We like to show the distinction between beef and dairy cows,” she said.
“Once in a while” the Starlings have brought their cattle to the State Fair, if they “have a particularly good cow.”
The heifers are “judged on what they look like — each judge has their own ideal in mind, so each judge is unique,” she said. “It makes it difficult.” Her farm has about 40 cows total.
Meanwhile, Oneida County 4-H Team leader Lisa Farney was making sure the livestock showers were aware of all the special events and activities going on for children each day and evening of the week-long fair. 4-H is also in charge of all the craft and educational exhibits on display at the fair’s Exhibition Hall.
Farney said educators with Cornell Cooperative Extension were also at the fair this year showcasing different programs, such as nutrition and child care, as well as agriculture in the Exhibition Hall.
4-H programs the children would be participating in throughout the week included the Barnyard Olympics, the Cow Costume Contest and other educational activities that would teach them how to better care for their animals.
“It’s great to see the kids participate,” said Farney, adding that despite the pandemic cancelling the county fair in 2020, and placing restrictions on the 2021 fair, youth participation in showing has actually grown this year. The same can be said about 4-H, she said.
“Participation in 4-H has been fairly steady in spite of COVID-19 too,” said Farney. 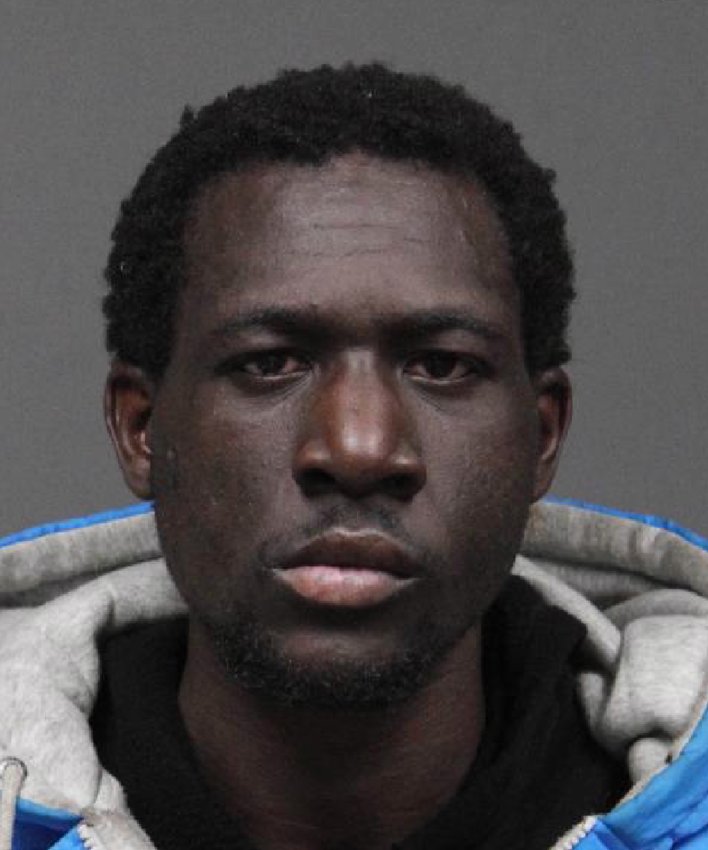