Once again, the future of the proposed retreat center at the former Air Force test annex is up in the air after being tabled by the Ava Planning Board at Tuesday’s meeting. 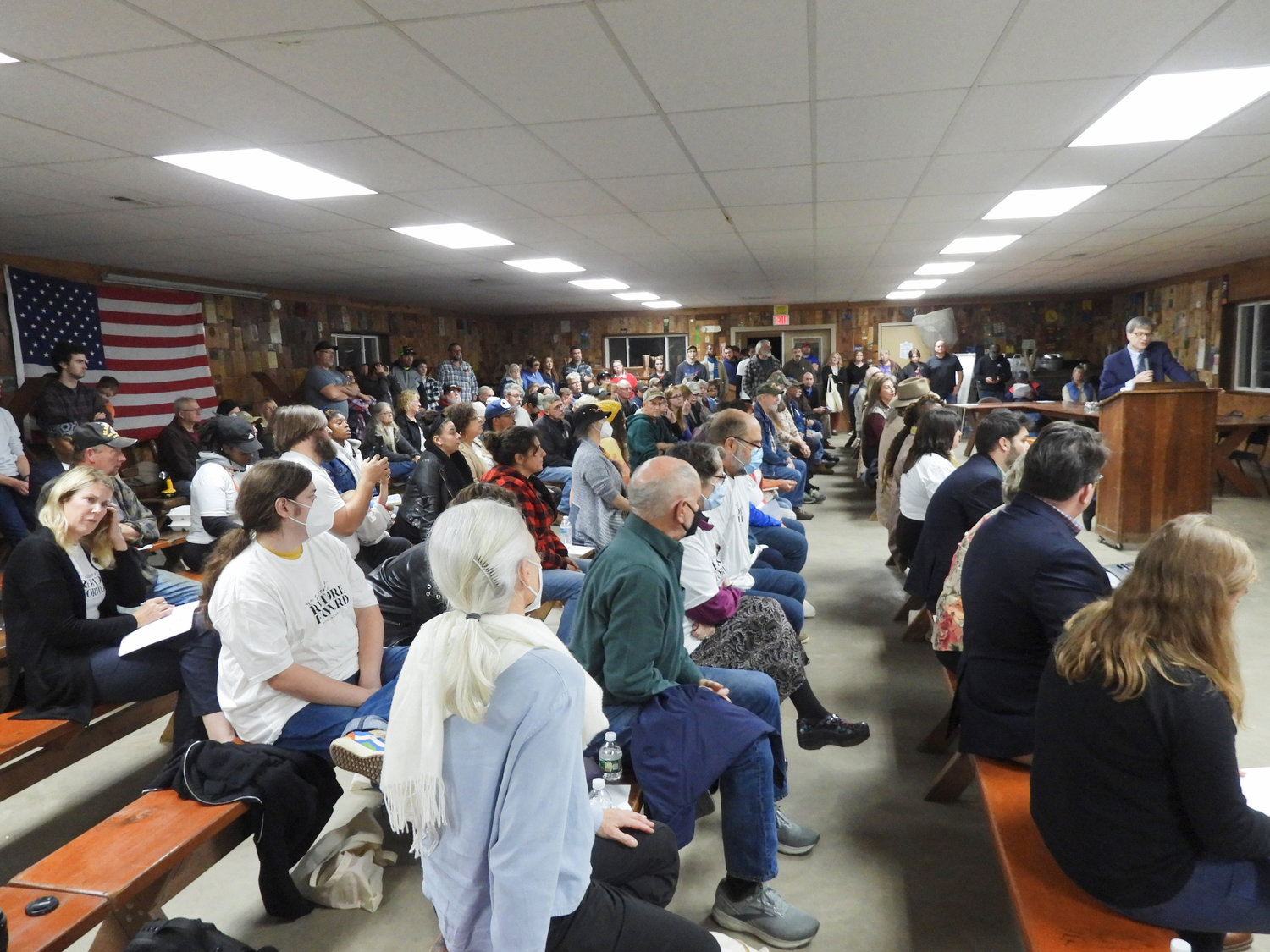 The Town of Ava Planning Board meets at Camp Kingsley on Tuesday, Nov. 2 where more than 100 people showed up to discuss a proposed retreat in the town.
(Sentinel photo by Charles Pritchard) 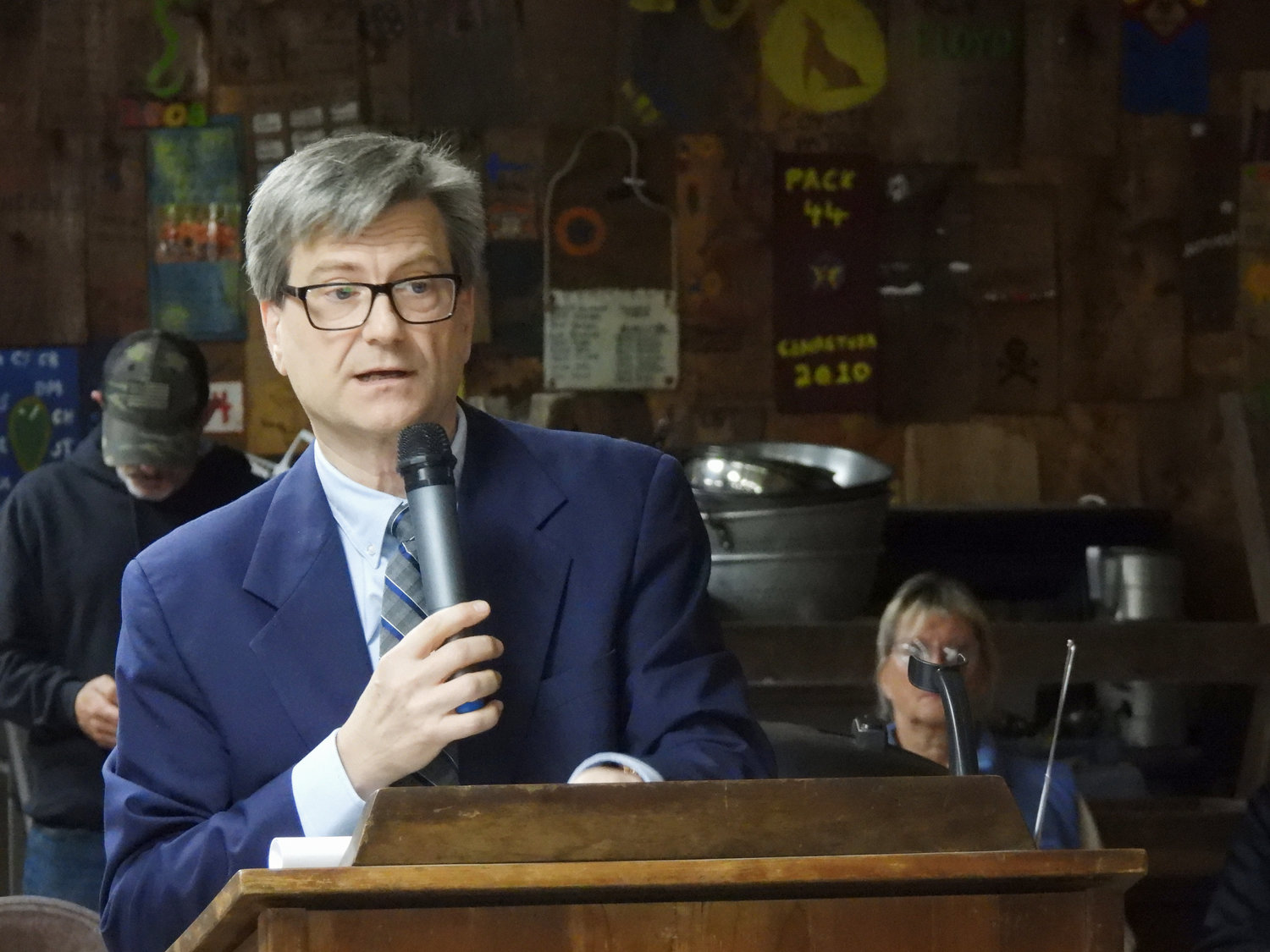 Robert Burgdorf, a real estate lawyer with Nixon Peabody LLP out of Rochester, speaks on behalf of an application for a retreat by Restore Forward.
(Sentinel photo by Charles Pritchard) 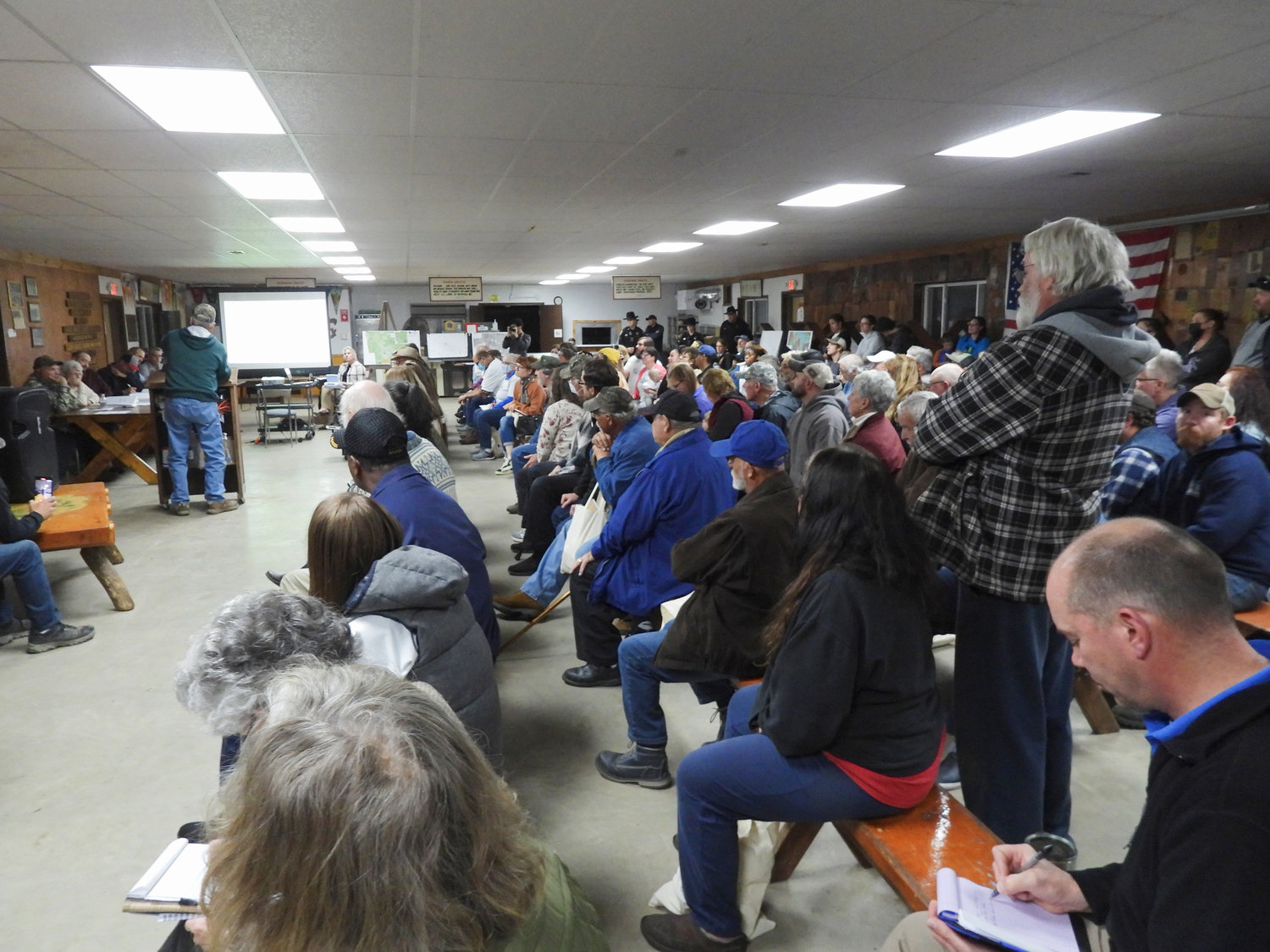 The Town of Ava Planning Board meets at Camp Kingsley on Tuesday, Nov. 2 where more than 100 people showed up
(Sentinel Photo by Charles Pritchard)
Previous Next
Posted Friday, November 4, 2022 12:30 pm

AVA — Once again, the future of the proposed retreat center at the former Air Force test annex is up in the air after being tabled by the Ava Planning Board at Tuesday’s meeting.

Restore Forward, affiliated with Black Women’s Blueprint, purchased from the town of Ava around 293 acres of land on Webster Mill road that once belonged to the Air Force until the late 1990s.

Restore Forward is looking for a site plan approval to develop and operate a campground retreat center on 30 acres of the parcel of land. There’s space for 90 RVs to be placed on the campground. The campground is expected to create around 60 to 70 jobs and 40 to 50 interim construction jobs.

In the application, the campground “… is intended to provide a holistic-themed retreat, offering a serene location where all people can come to camp, visit, restore themselves, and participate in holistic education activities … as well as recreational activities.”

In May 2021, the Ava Planning Board held a meeting to hear about this project for the first time — but it was shut down when the crowd of around 70 people grew unruly and began yelling questions.

With concerns mounting, the Oneida County Sheriff’s Office was on hand to oversee the meeting, and the meeting was held at Camp Kingsley to accommodate a crowd, estimated to be about 100 people on Wednesday.

T-shirts and stickers announcing the wearer’s support for Restore Forward were worn by around half of those in attendance.

Representing Restore Forward and speaking on their behalf was Robert Burgdorf, a real estate lawyer with Nixon Peabody LLP out of Rochester.

Burgdorf gave a 30-minute presentation on the proposed campsite, detailing what the campsite would be and answering questions that were posed at the last meeting.

On the topic of questions raised at the last meeting, Burgdorf answered some of the most commonly asked questions.

They are as follows:

Is the facility open to anyone?

“Yes, it’s open to anyone from the public,” Burgdorf said.

Will the campground create traffic congestion?

“No, the stays at the campground are intended to be an average of three days, not coming and going. And there aren’t that many cars that would be accessing the property,” he said.

Will the water supply to the campground create an undue burden on the water table?

“It’s been concluded in the water supply well and onsite sanitary waste treatment report, prepared by Barton and Loguidice, that there won’t be any undue burden,” Burgdorf answered.

Will the campground be affiliated with or intend to provide services to released felons?

“We’re not sure where that question came from, but the applicant is not affiliated with any prison service and does not recruit as part of its population. It has no direct link or associations with prisons or prison programs and in no way is the campground intended to service that population,” Burgdorf said.

Where does the applicant get their money?

“Not legally relevant, but interest in answering questions, we listed the 60 largest donors and grants in the application, from the United Way to other well-known foundations. It’s all public knowledge,” Burgdorf said.

Will the applicant pay property taxes?

“The applicant will pay any and all real property taxes required by them. As a non-profit corporation, there may or may not be some real property tax exemptions they may apply for. But that’s governed by state law,” he said.

Burgdorf said Restore Forward has a companion application with the Ava town board related to a 280-A issue, requiring certain access requirements.

Board Chairman Keith Redhead read a letter from the West Leyden Volunteer Fire Department, saying it has read the water supply well and onsite sanitary waste treatment report for the campground.

The driveway would also need to be wide enough to handle fire trucks coming into the campground.

Board Member David Thornton made a motion to table the application until the 280-A issue has been resolved. The motion was passed unanimously.

Multiple people spoke at the public hearing, with many of the concerns coming from those against the project being transportation issues.

“My main concern is transportation on the road,” said Anna Weaver. Weaver resides in Western, but she has property in Ava. “We’re a small, rural farming community. We have three active farms along that road, and they have a lot of large farming implements that slow traffic. And recently, the horse farm expanded. I’m not sure how the study was done and said it won’t impact, but 90 RVs have to impact it. And the roads aren’t in the best shape, to begin with.”

One resident, Tom Tkachuk, earned the ire of those in attendance when he pointed out that Restore Forward spent $250,000 on this property, which went right into the coffers of Ava, and challenged anyone in the audience to speak up if they’ve made such a contribution to the town.

In response, many people grew angry and yelled that “They pay taxes.”

Reverend Linda Logan of Trinity Episcopal Church said she was impressed with the proposal and its intent to help multiple people in the community through efforts of meditation and communication, offering the opportunity for people of different backgrounds to get to know each other.

“I think a number of people in the audience would claim affiliation with some Christian denomination,” Logan said, shifting gears. “If you do, you are supposed to be imbued with the philosophies and policies of Christ — which is to raise people up, to see the benefit in each person, to quit castigating people, and celebrate the diversity of God’s creation.”

“I’m delighted Restore Forward is here, and I look forward to working with them in any way I can.”

There will be an Ava Town Board meeting on Wednesday, Nov. 9 at 7 p.m.