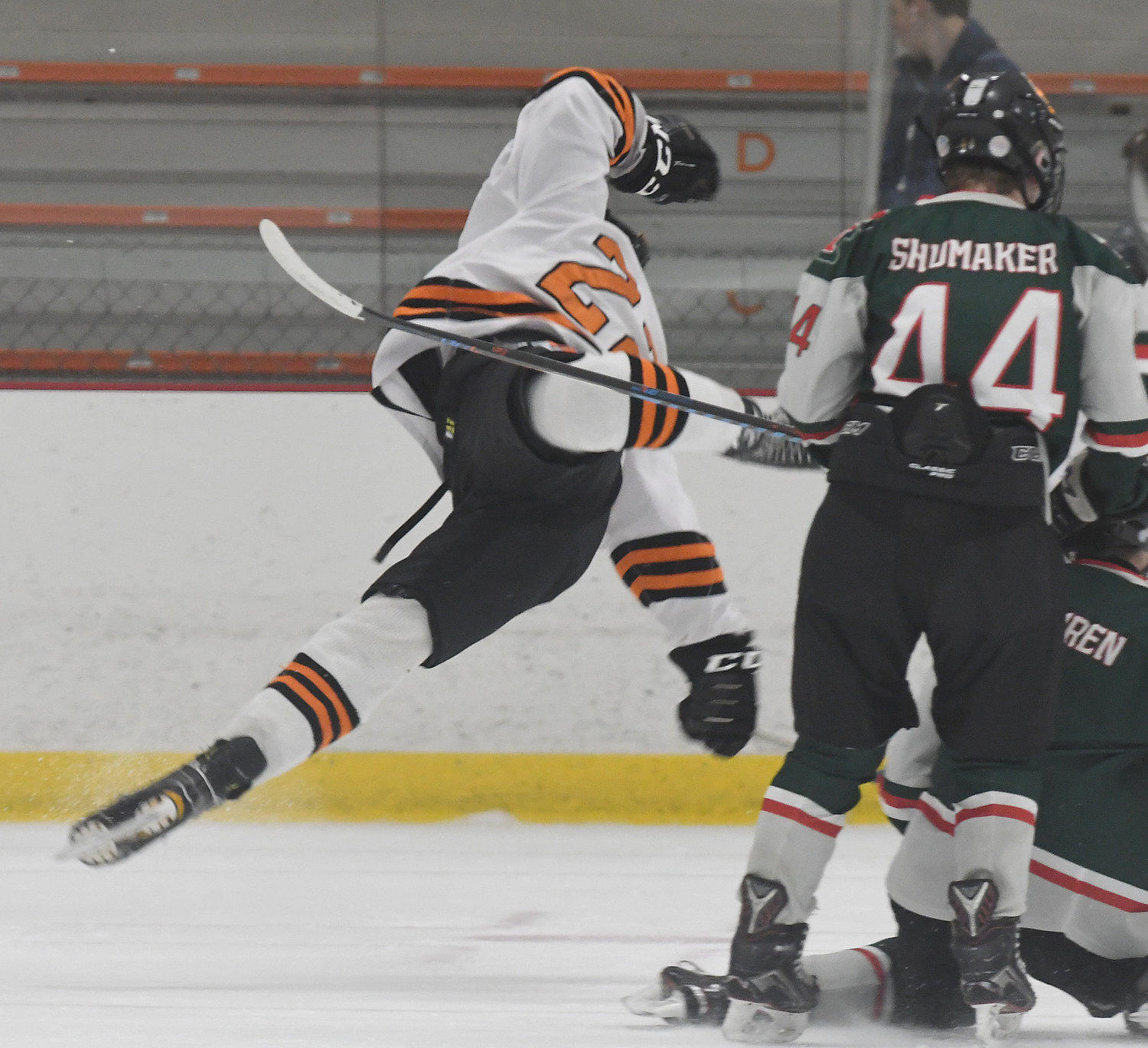 TAKES A TUMBLE — Rome Free Academy defenseman Danny Mecca goes flying after he was swept off his feet during a rush into the offensive zone early in Friday night’s 4-1 in over Fulton at Kennedy Arena. Mecca scored the team’s first goal on a power play in the first period.
(Sentinel photo by John Clifford) 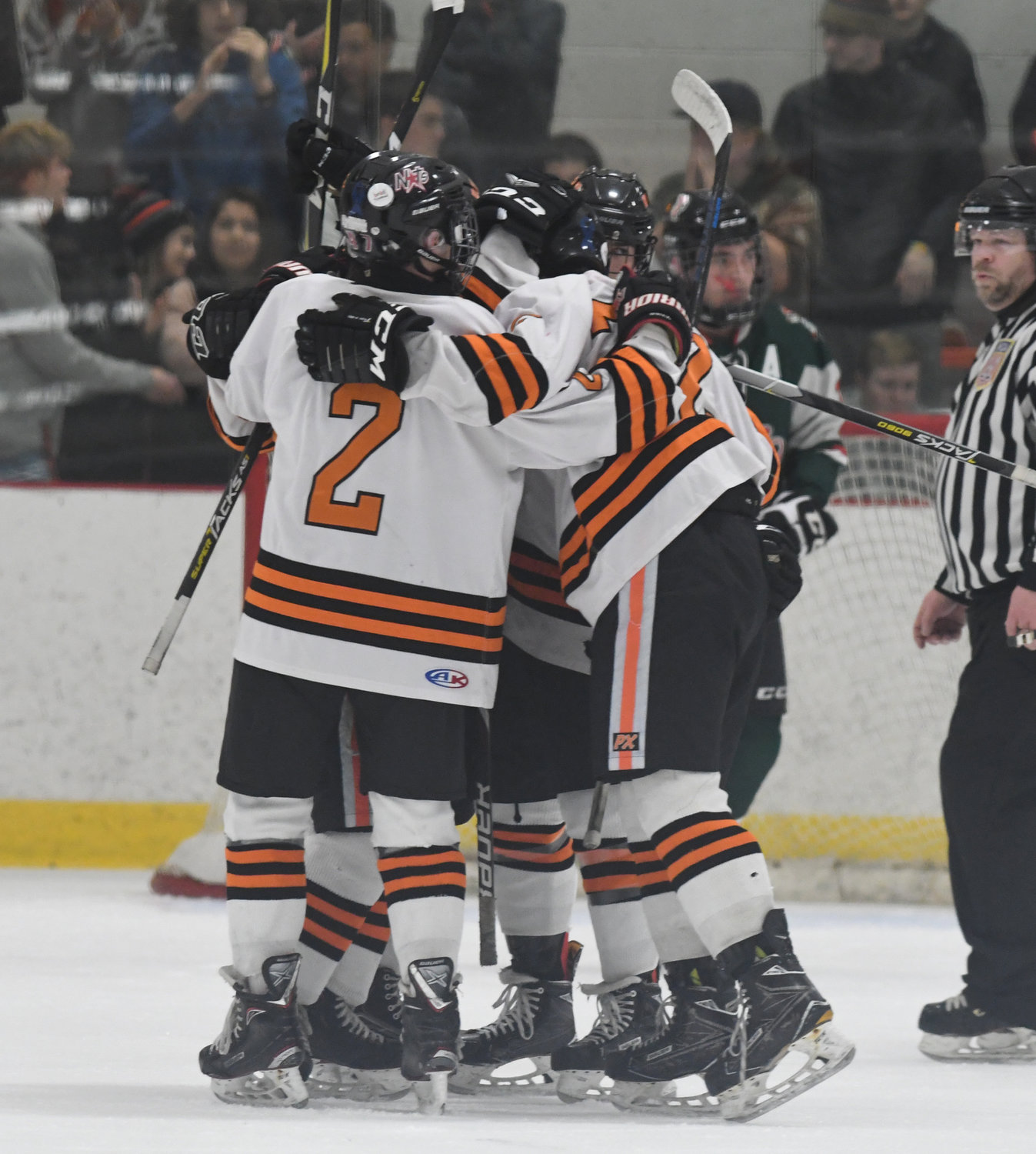 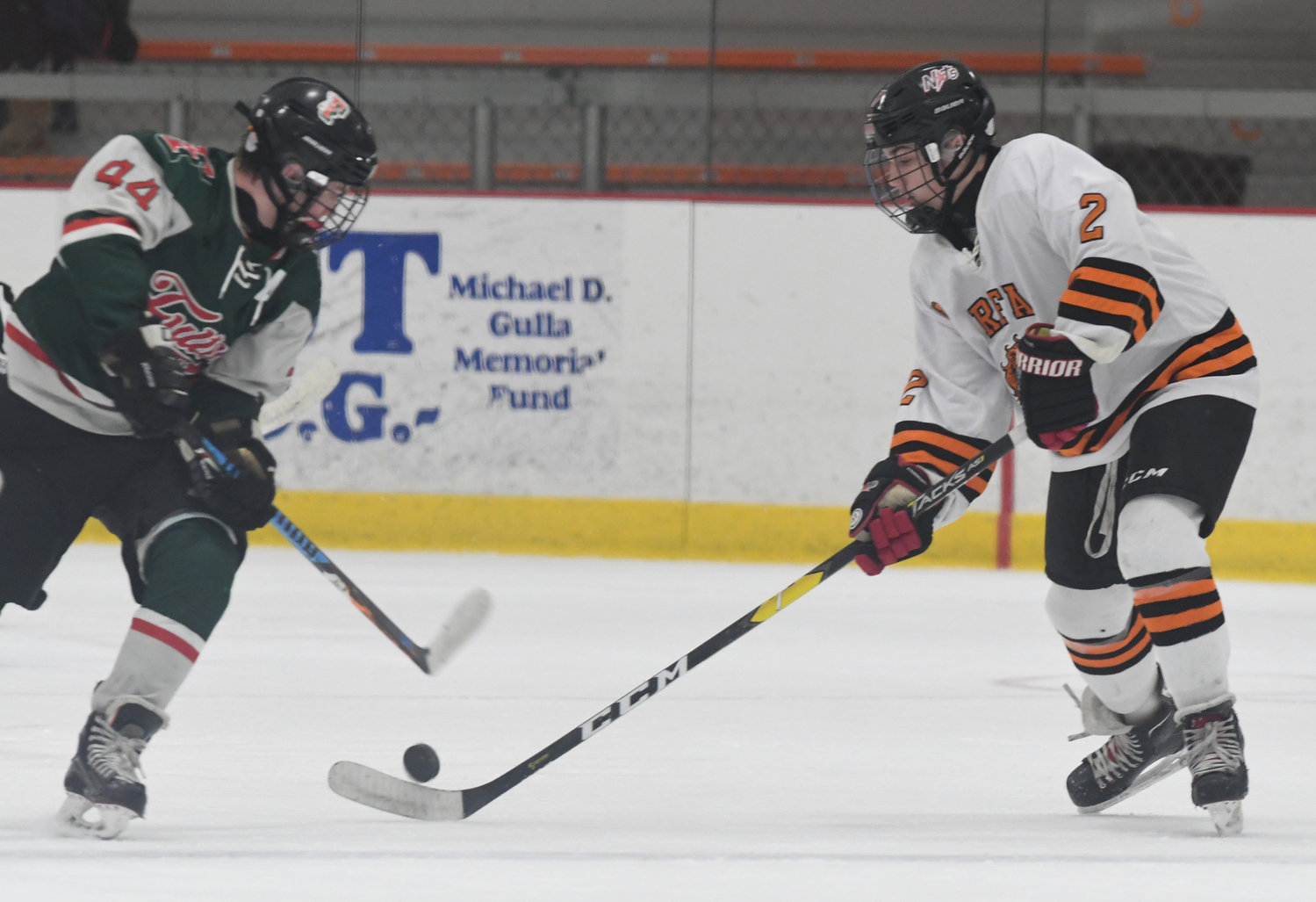 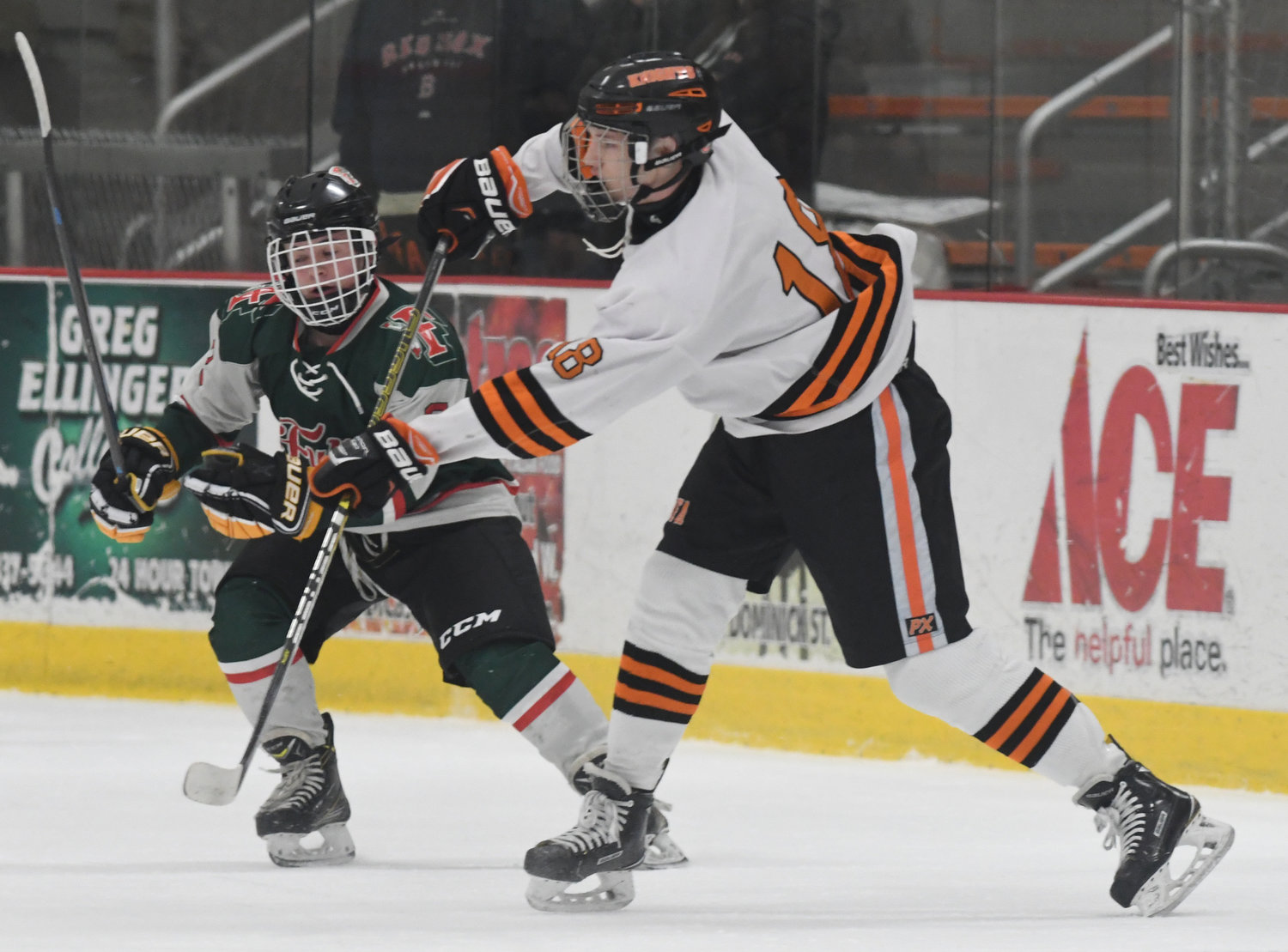 The Division I victory pushed the Black Knights’ league record to 6-2, and the team is 12-3 overall. They are 9-0 at home.

The Knights got on the scoreboard first with a power play goal just over ix minutes into the contest. Senior captain Danny Mecca took a pass off a face-off win immediately after the penalty, blasting a one-timer past Red Raider goalie Jaden Lee. Griffin Eychner and Jake Hall earned assists on the play.

Eychner would get a goal of his own to push the first period lead to 2-0. With 3:40 remaining in the opening period, Defenseman Aaron Russell carried the puck in on the right side and threw a pass to Hall on the doorstep on the right side. Hall tipped the puck and Eychner grabbed the loose puck on the other side of the goal mouth, ramming it home for the score. Hall and Russell were credited with assists.

RFA would have to kill almost five minutes of power play time when Eli Dormio was called for checking from behind 1:40 into the second period.

Fulton took a penalty just before the Dormio penalty expired and Rome prevented Fulton from scoring on the man advantage. The period was a scoreless affair but Rome dominated puck possession and outshot Fulton 15-3 in the middle frame.

The Black Knights stretched the lead to 3-0 with a second power-play goal, this one with 12:22 left in the game. Hall passed to Eychner, who in turn shipped a pass from the left circle to linemate Aaron Simons at the top of the goal crease. Simons scored and Hall and Eychner had assists.

The Knights had to kill another five-minute major with 8:22 left in the game. A fracas along the boards in the Rome zone erupted, and the result was Mecca getting a major penalty for head contact. He was ejected but will not miss the next game. Fulton could not capitalize on the advantage.

Within seconds of the major expiring, however, the Red Raiders got on the scoreboard. Joseph Galvagno cut in on RFA goalie Isaiah Nebush and scored. Derek Schumaker collected an assist. Nebush stayed down after the play, having taken a stick blade to the throat during the scoring play, but he would stay in the game.

Logan Dorfman would close out the scoring for RFA with an empty net goal with 56 seconds left in the game. Kyle Lubey was credited with an assist on the play.

The RFA first line of Hall, Simons and Eychner continues to put up impressive numbers. Eychner has 11 goals and 11 assists. Hall has nine goals and 13 assists. Simons has five goals and four assists. “Those three guys right now are really moving the puck well. It’s like they know where each other are on the ice at all times,” said RFA coach Jason Nowicki after the win. The three are routinely putting up positive plus-minus ratings, he noted. And mixing those players with the third line has elevated the other players’ games as well, he said. “Those guys are really coming along,” he said of Joey Gulla, Jake Premo and Dominick Gualtieri.

Nowicki said he was impressed with the team’s ability to kill 14 minutes shorthanded. “We continue to really battle a man down. The kids know what we want to do a man down.”

Nowicki continued: “I love coaching this team. Every night we have different guys stepping up. This team likes to rally off each others’ play. And that’s what hockey is all about.”

Sophomore defender Jared Hussey, who put up a plus-three night, said the coaching staff continues to “want us to be up in the play more” as a defensive group, while staying smart about positioning.

He said teams have underestimated Rome as a smaller team that is primarily built for speed but has played more physically in recent weeks. “It’s all about who really comes to play, and so far this year it’s us. We’re a team that wants to do big things.” And that means focus in practice, a strong power play, forechecking and “staying positive with each other on the bench.”

Nebush stopped 23 of 24 Fulton shots for the win.

The Black Knights play their final game of the regular season outside Kennedy Arena when they travel to Cicero-North Syracuse for a 7:30 p.m. game on Tuesday.