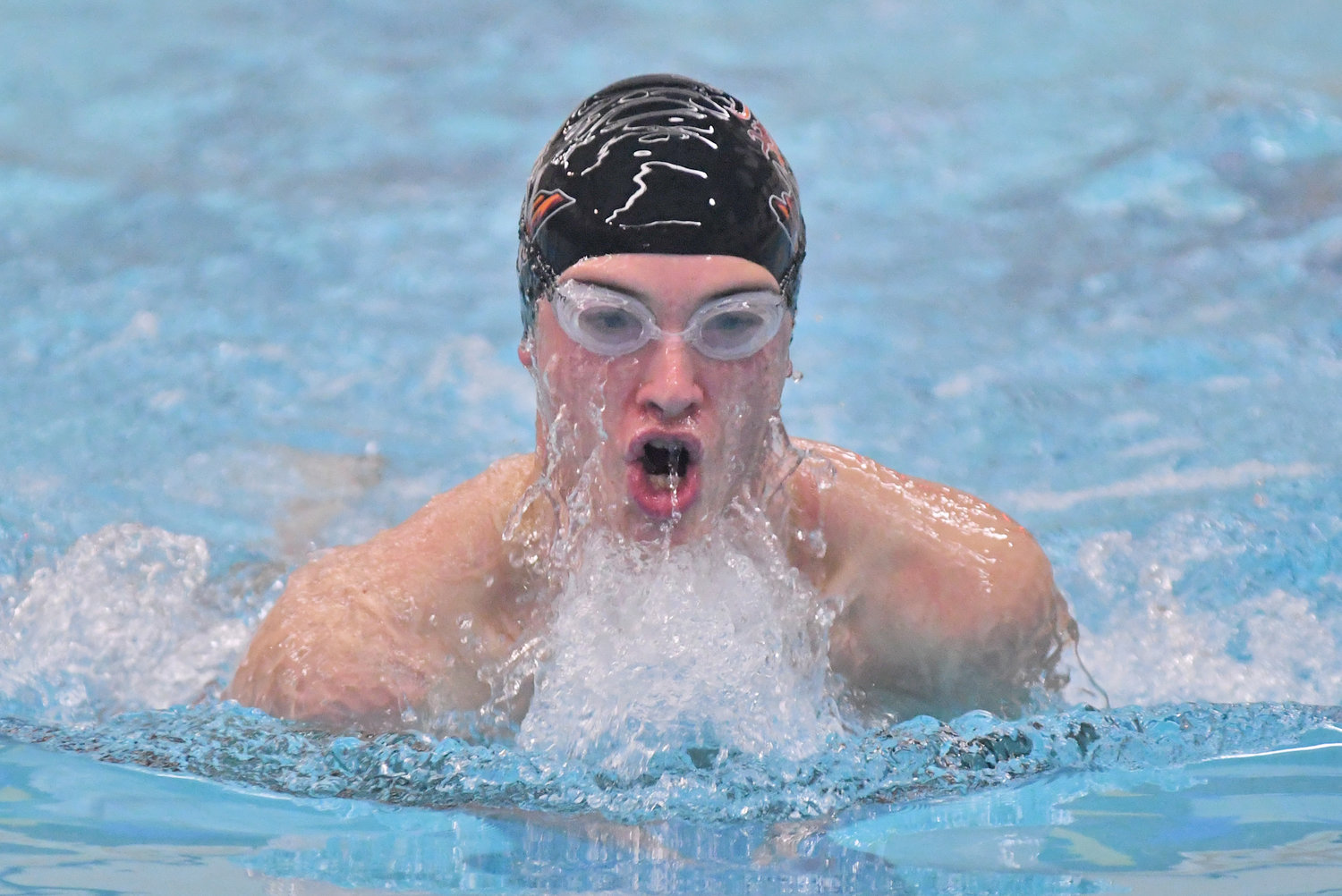 UP FOR AIR — Rome Free Academy swimmer Jack Anderegg comes up for a breath of air while competing in the breaststroke portion of the 200-yard medley relay during this Dec. 16 file photo in Holland Patent. Anderegg won the 100 butterfly in 1:09.31 against Cooperstown on Thursday.
(Sentinel file photo by John Clifford)
Posted Friday, January 14, 2022 9:00 am

The Rome Free Academy swimming and diving defeated Cooperstown 59-39 at home to improve to 9-0. The team sits atop the Center State Conference standings.

RFA won the 200 medley relay with a team of Cody Madonia, Dominick Gratch, Joseph Keeney and Tanner Brawdy in 1:52.28.

William D’Agata won the diving event for the Black Knights.

RFA hosts Oneida in a league meet at 4:30 p.m. Tuesday in an event at the Holland Patent pool.

The Holland Patent boys and girls bowling teams got 5-0 wins against Herkimer at home at King Pin Lanes in Rome Thursday in the Center State.

The girls were led by Avery Carlson, who rolled a high game of 212 and high series of 554.

Herkimer’s Aleah Oldfield led the Magicians with a 131 gameand 344 series.

For the boys, HP’s Dmitry Lukashevich had a high game of 232 and high series of 612.

For Herkimer, Michael Conley had a high game of 215 and high series of 557.

Westmoreland, 2-2 this season, hosts Chittenango at 6:45 p.m. Tuesday in the league.

The Adirondack girls volleyball team got a 3-2 win at Clinton Wednesday in non-league play.

Adirondack statistics were not provided.

The Wildcats is on the road today at 7 p.m. against the Utica Academy of sciences in the Center State Conference.

The Warriors host Morrisville-Eaton at 7 p.m. Tuesday in a non-league matchup.

The Holland Patent girls volleyball team won 3-1 on the road against Remsen Wednesday in non-league play.

HP is at Sherburne-Earlville at 7 p.m. today in the Center State.

Remsen hosts Morrisville-Eaton at 7 p.m. today in the Center State.

The Westmoreland girls volleyball team suffered a 3-0 loss at home against Canastota Wednesday in non-league play.

For Westmoreland, Mia Lazzara had three kills, six digs and a pair of aces; Sam Dee had three digs and two aces.

Canastota statistics were not provided.

Westmoreland travels to Cooperstown at 7 p.m. today in the Center State.

Notre Dame powers past Camden on the hardwood

The Utica Notre Dame girls basketball team jumped out to a 11-1 lead after a quarter Thursday against visiting Camden. The Jugglers won the Tri-Valley League matchup 41-16.

Camden statistics were not provided.

Camden hosts Whitesboro at noon Monday in the TVL.

The Oriskany girls basketball team fell behind early and couldn’t catch up in a 79-37 loss at home Wednesday to West Canada Valley in the Center State.

West Canada led 27-7 after a quarter and took a 44-17 lead into the half. Reese Fellows had a game-high 24 points for the visitors, as well as 18 rebounds for a double-double. Erin Gorinshek had a double-double as well, with 16 points and a dozen boards. The team had a third double-double, as Olivia Morreale had 12 points and 10 assists.

For Oriskany, Jordyn Coleman had a team-high 16 points and Ashley Reid added 10.