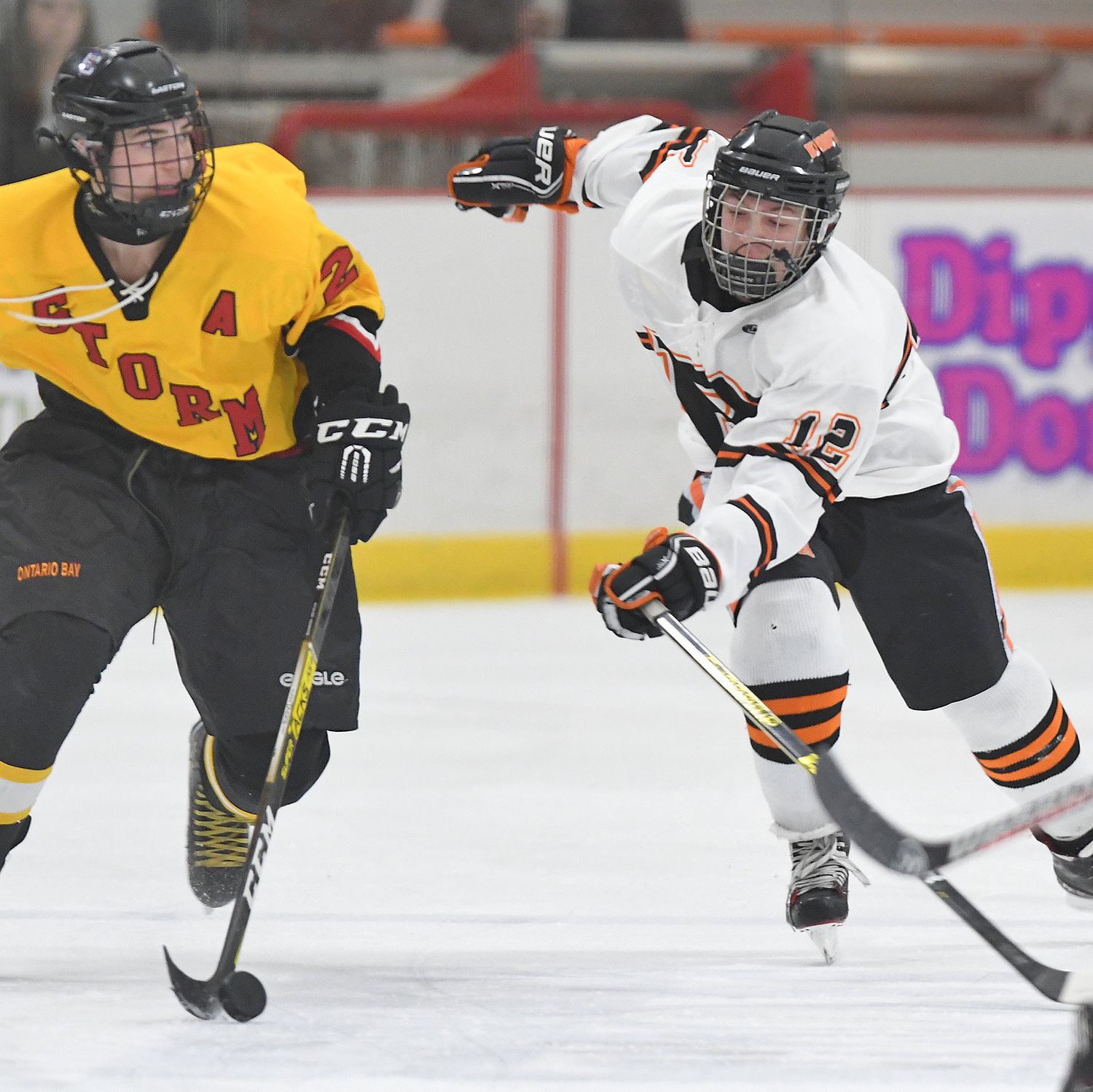 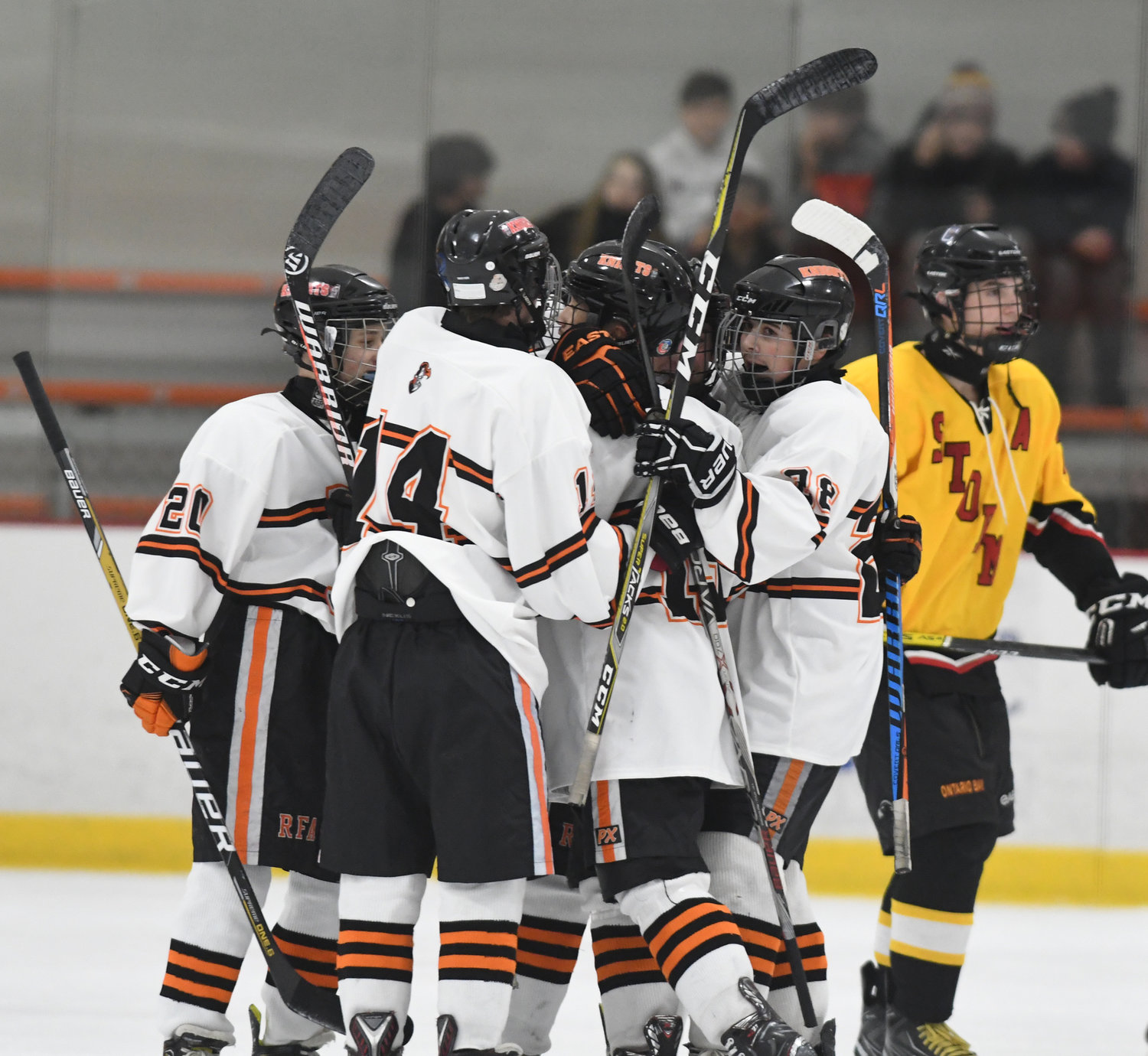 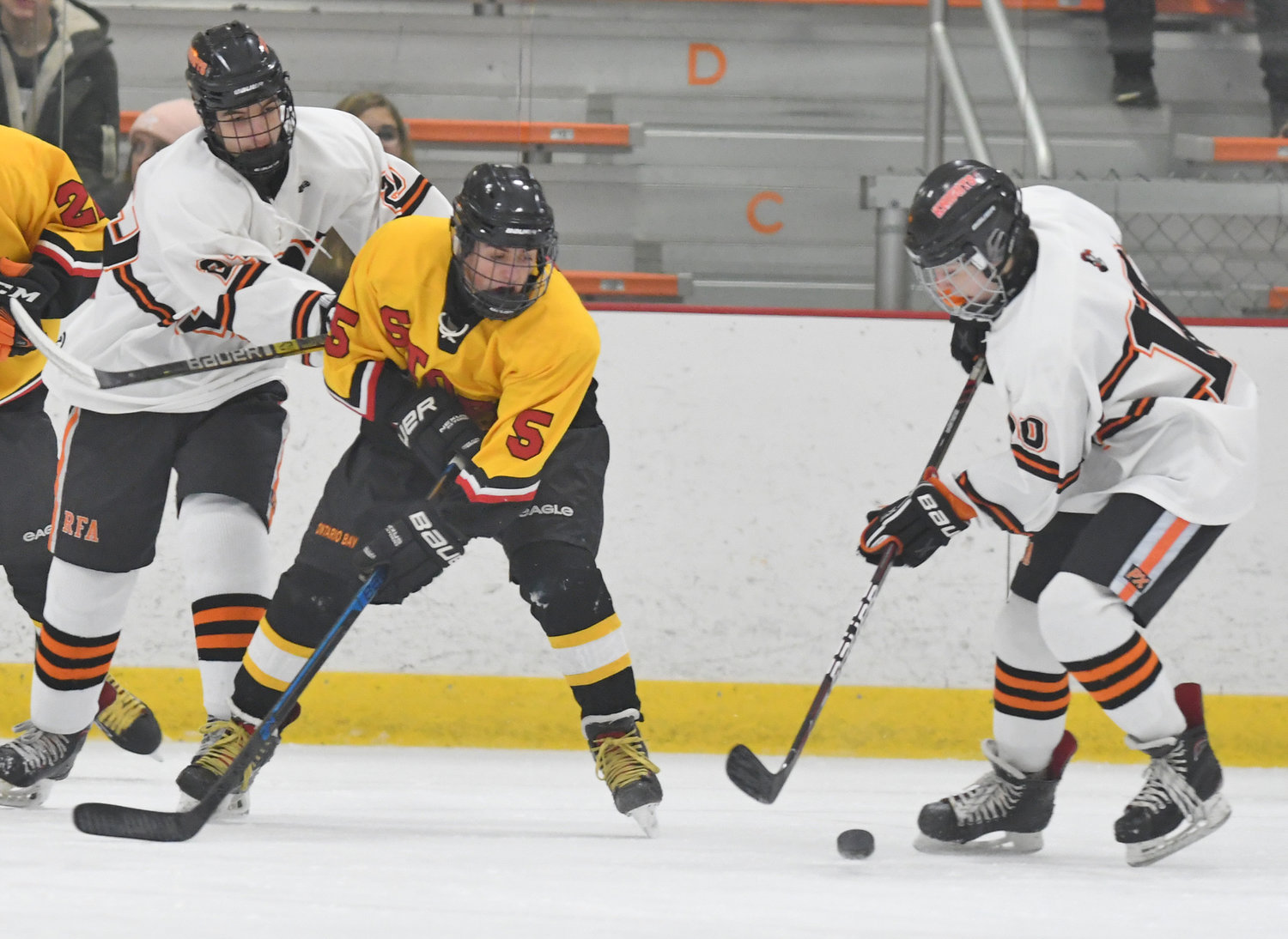 RFA DOMINATES — Griffin Eychner of Rome Free Academy, left, and teammate Jason Combs, right, surround Ontario Bay's Caeden Goodnough during the first period as Combs gets possession of the puck. Eychner led the Black Knights to an 8-1 win with three second period goals and two assists to go with them.
(Sentinel photo by John Clifford) 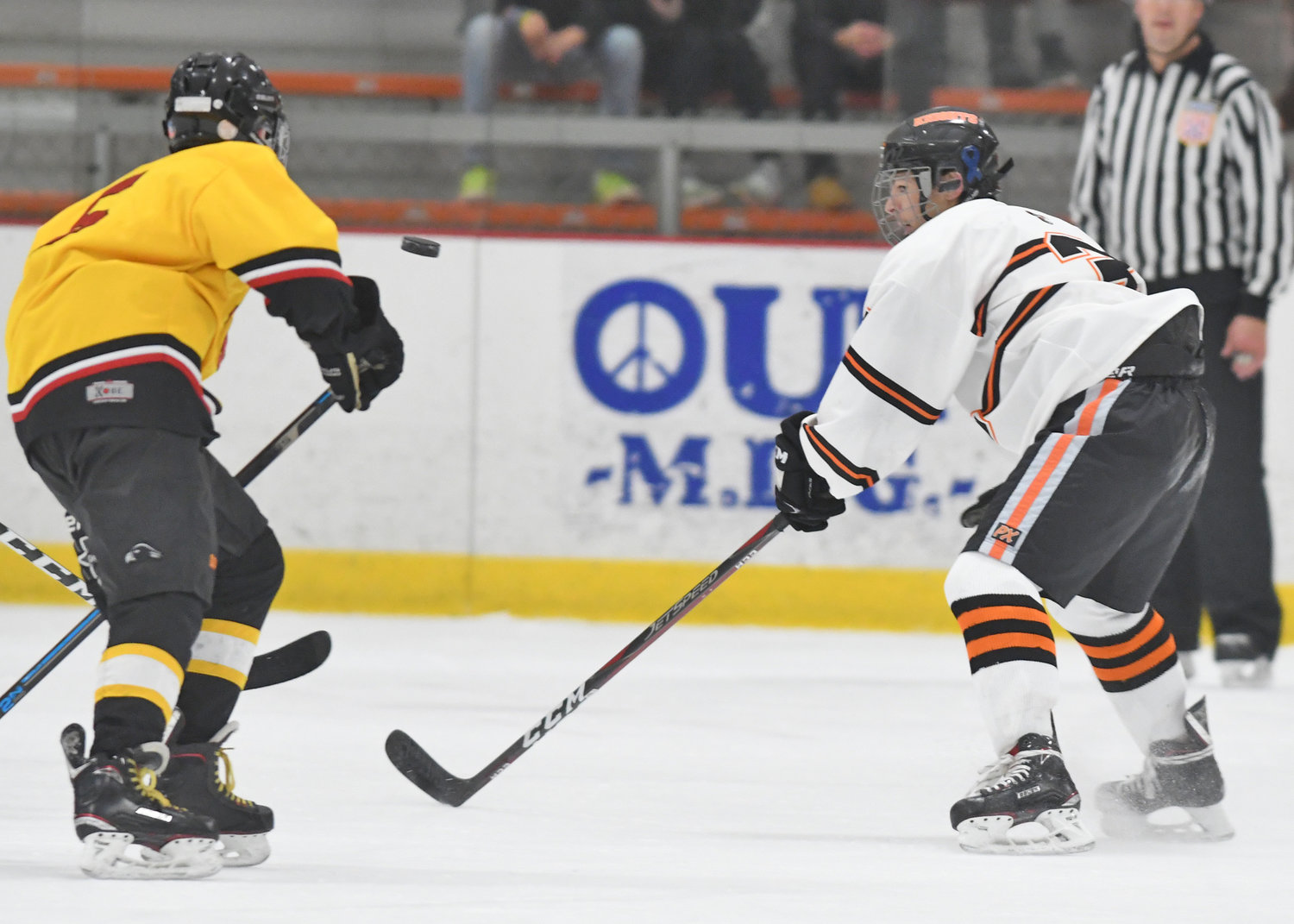 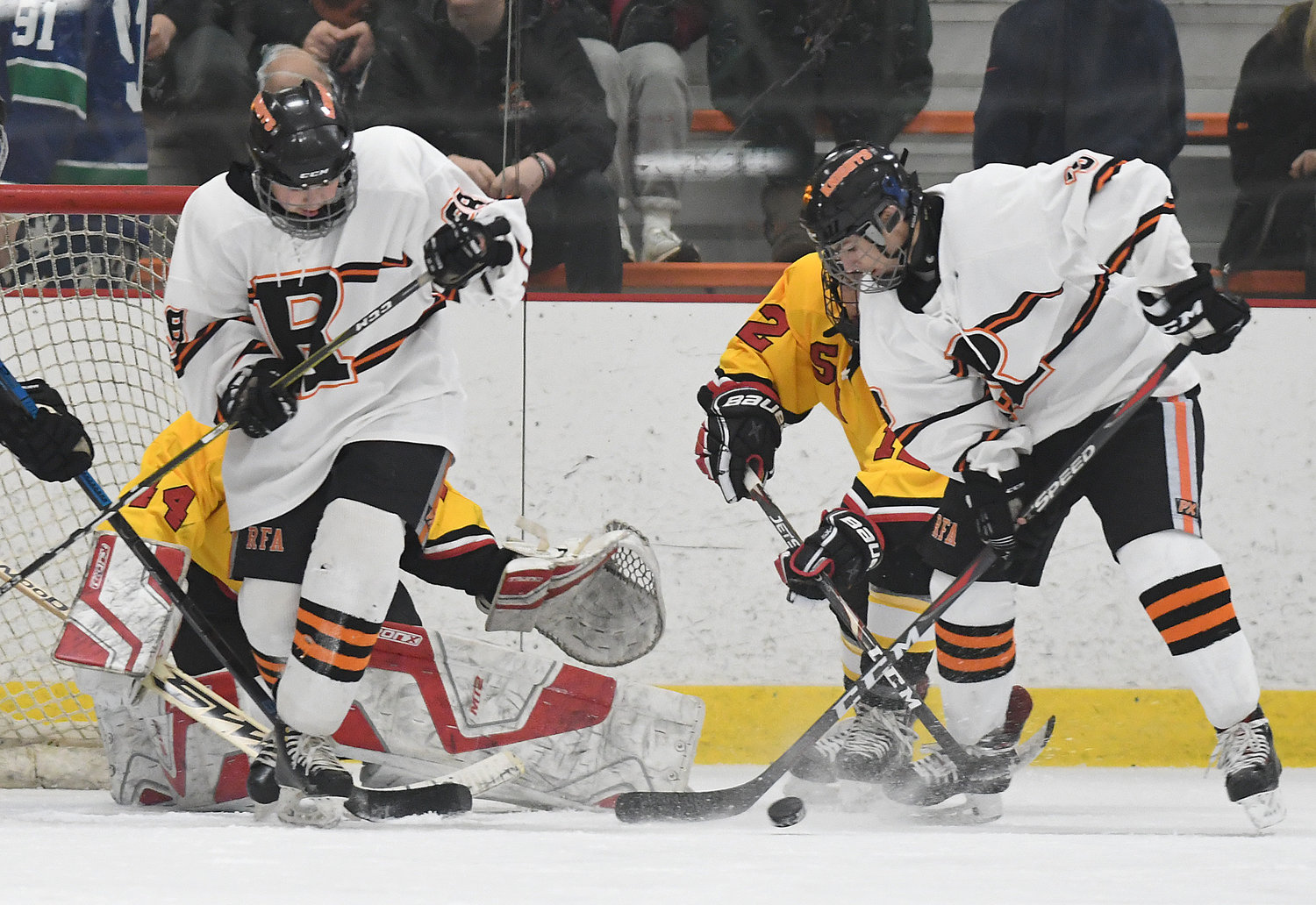 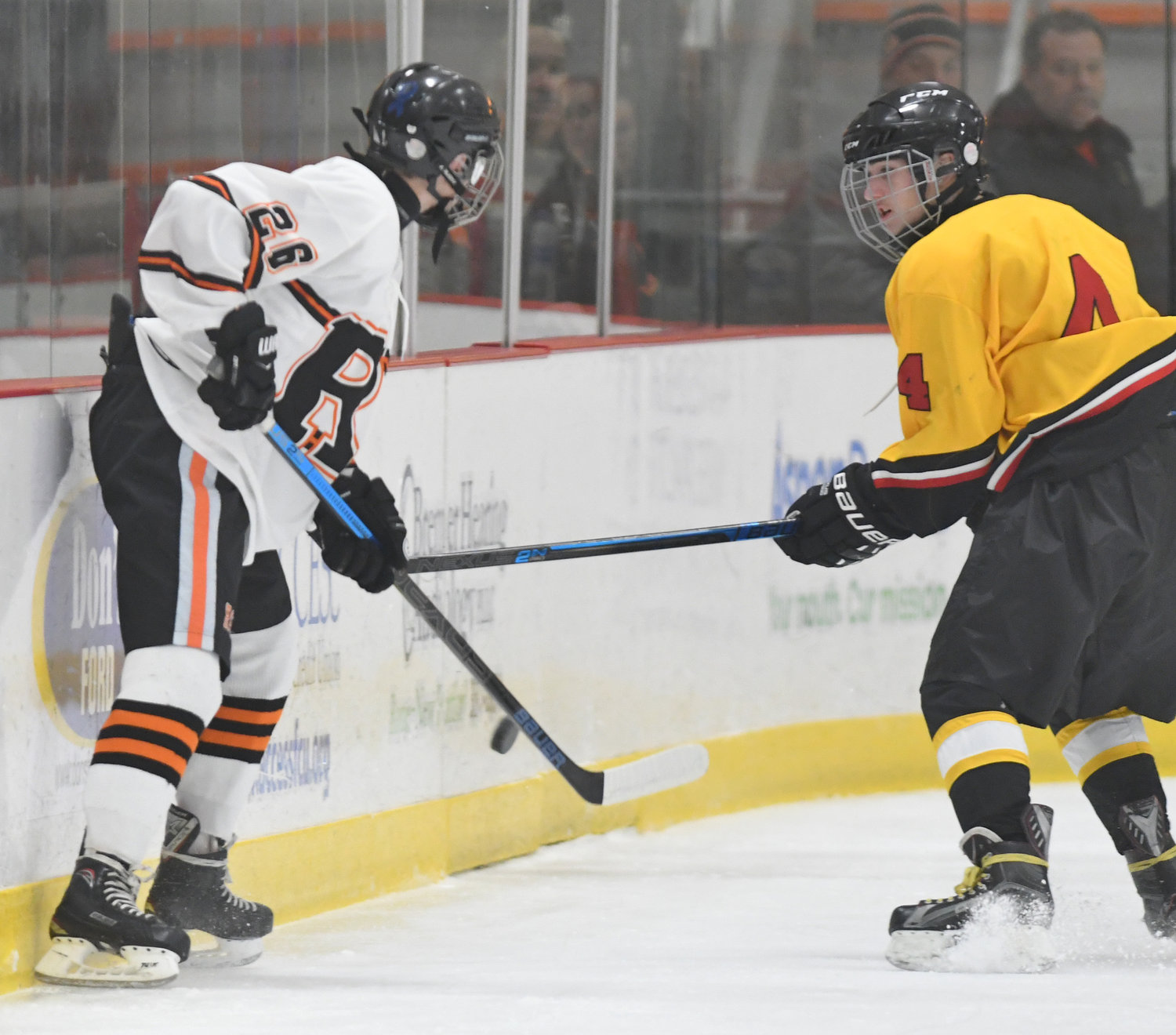 Rome Free Academy rebounded from its lone loss of the season with an 8-1 home league win over Ontario Bay Tuesday night at Kennedy Arena. Griffin Eychner, one of the Black Knights’ three captains, netted a second period natural hat trick as part of a five-point night.

It took RFA most of the first period to solve Ontario Bay’s defense and goalie Collin Bennett, but once the goals came, they came often.

Defenseman Jared Hussey got the only goal of the first period, a shot that got through traffic from the right point and hit the back of the net with 3:49 left in the opening frame. Sam Wilson and Derek Millington each earned assists on the play.

The second period was an offensive display, as RFA scored six times and the Storm got their goal as well. Eli Dormio opened the scoring on the first shift of the period by scooping up a rebound in front and getting the puck past Bennett, who was down in front. Joey Gulla and Jake Hall assisted.

Eychner scored the first of his three in the period with 10:22 remaining, taking a drop pass from Jake Premo and shooting high from a spot low in the left face-off circle.

Later in the shift, it was Kyle Lubey who took a left-to-right feed from Ecyhner and shot to the open side of the net. Premo earned his second assist of the shift and Eychner earned one as well.

During a 85-second span starting at 7:45 of the period, the teams scored four goals. First it was Hall on a long rebound from the right circle on an assist from Gulla.

Then it was Eychner from Premo and Aaron Russell on a semi-break before Ontario Bay got into the scoring column on a tally by Gabriel Smith from Zach Blevins. RFA responded almost immediately when Eychner scored again, this time on assists from Hussey and Lubey.

At that point, RFA’s Isaiah Nebush was relieved in goal by Len Dormio. Nebush stopped five shots. Dormio would go on to stop all eight he faced.

The only goal of the third period was by Lubey with 10:34 left in the game. He took a pass skating right to left and fired a shot past Bennett. Eychner got the assist for the pass.

“We left here Friday night with a real sour taste in our mouth,” said RFA head coach Jason Nowicki of the team’s 4-0 loss to Syracuse. The talk that night was of how they would respond. “I think we responded with a very good effort tonight,” he said. “Our forwards did a good job,” taking the challenge he put to them at practice to go wide with speed around defenders, deliver the puck to the net and crash it looking for rebounds.

The early goals Tuesday, he noted, were scored just like that. “A lot of contributions by a lot of guys on this list,” he said looking at the scoring sheet with 10 RFA players on it.

“It was great to get it done. We needed a bounce-back win,” said Eychner after the game. “We still have a little bit to go.”

He said the team’s transitional offense was working well but he stressed that the wings have to work in the defensive zone to limit opponents’ scoring chances. “I think we have the potential. We have yet to hit our peak.” His line specifically, he said, makes it “pretty fun. We’re clicking.”

Eychner said the team learned from the Syracuse loss. “It really highlights the things you do wrong,” as good teams like Syracuse score when opponents turn the puck over.

Nowicki said he was “excited” about Premo, a freshman, especially for his work in the defensive end creating transitional scoring chances. Often, he said, when a team gets up by a lot the tendency is for players to get selfish and look to score first and not focus on defense. That was not the case against the Storm, he said.

“You know you’re going to get the best from Griffin Eychner and Kyle Lubey,” said Nowicki of his top line, who played with Premo Tuesday in a little change from previous lineups. Hall, he said, “continues to play well,” creating for his linemates and developing defensively.

The Bobby T. Ciccotti Hockey Tournament, usually played at the start of the year, will be held Friday and Saturday at Kennedy Arena, with RFA, Mohawk Valley, Whitesboro and New Hartford.

Nowicki said he wants to see his team continue its intensity and push to keep winning 50-50 chances. Regardless of where it is on the calendar, the tournament will have the “same level of excitement,” he said. The four teams will renew their local rivalries, he said.

RFA improved to 4-1 overall and 2-1 in Division I. The Black Knights will play the second game of the opening round of the tournament at 7:30 p.m. Friday against New Hartford.

Clinton goalie Josh Trask made 23 saves to earn the win.