Coming off a season with a playoff appearance, the Rome Free Academy football team is looking to build off that and continue to improve its showing in Class AA this fall. 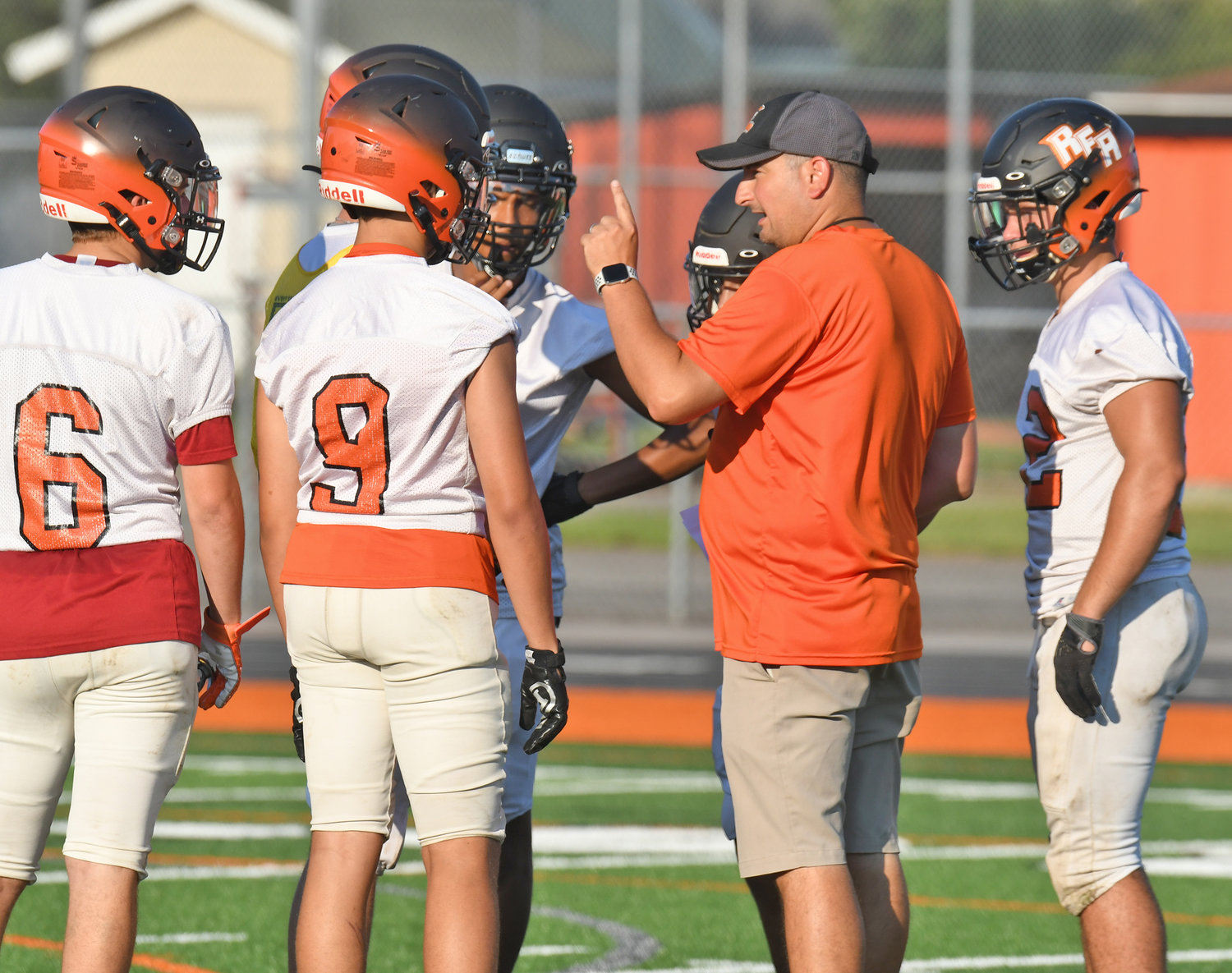 Rome Free Academy head coach Jake DerCola gives instructions during a scrimmage with Camden on Aug. 29. The coach is back for his fifth season at the helm for the Black Knights, who were 2-6 last season in Class AA.
(Sentinel photo by John Clifford) 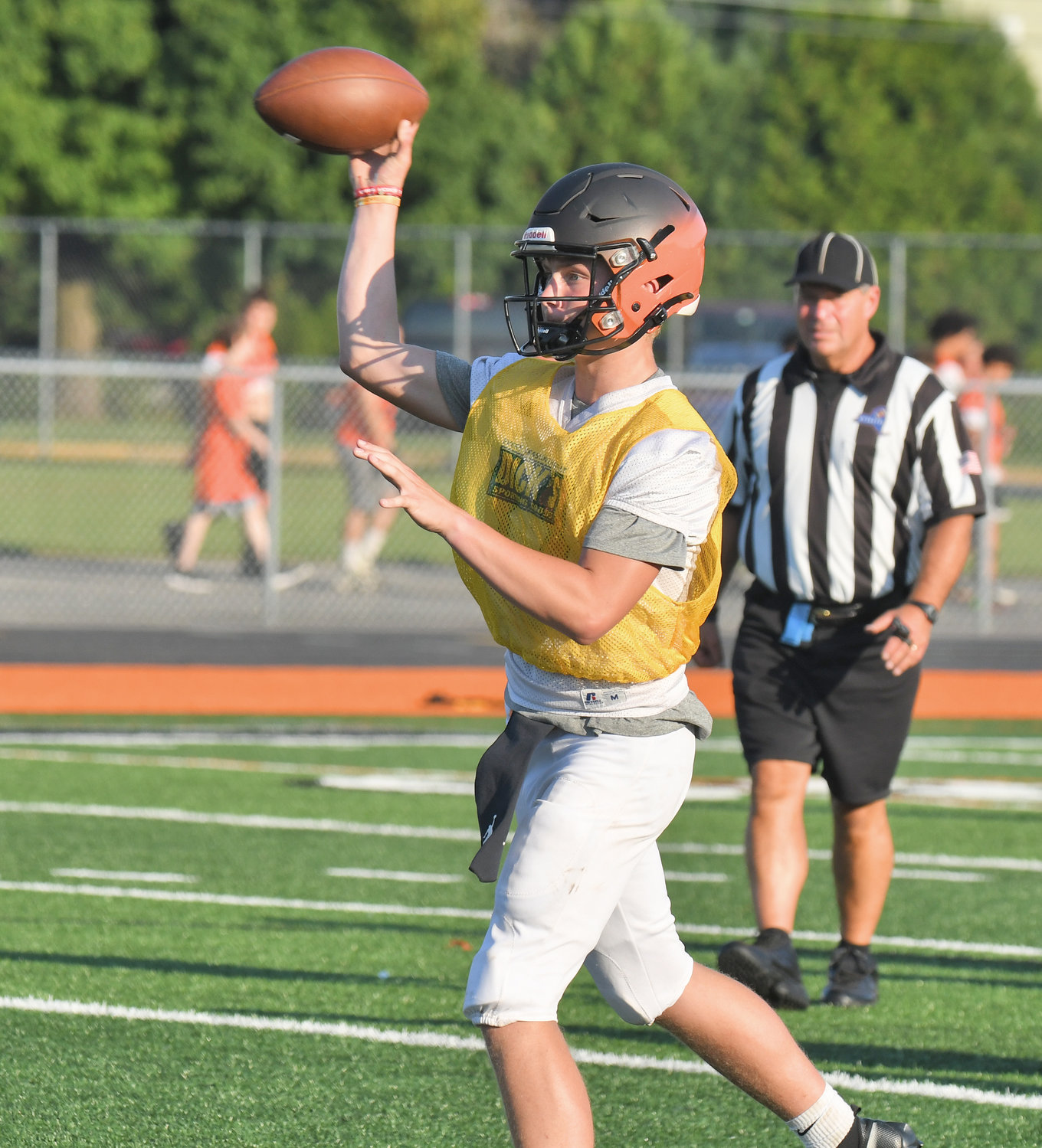 Rome Free Academy junior quarterback Evan Carlson-Stephenson makes a pass during a seven-on-seven scrimmage with Camden on Aug. 29. The Black Knights will need Carlson-Stephenson's experience and leadership to help overcome the loss of a number of skill players on offense.
(Sentinel photo by John Clifford) 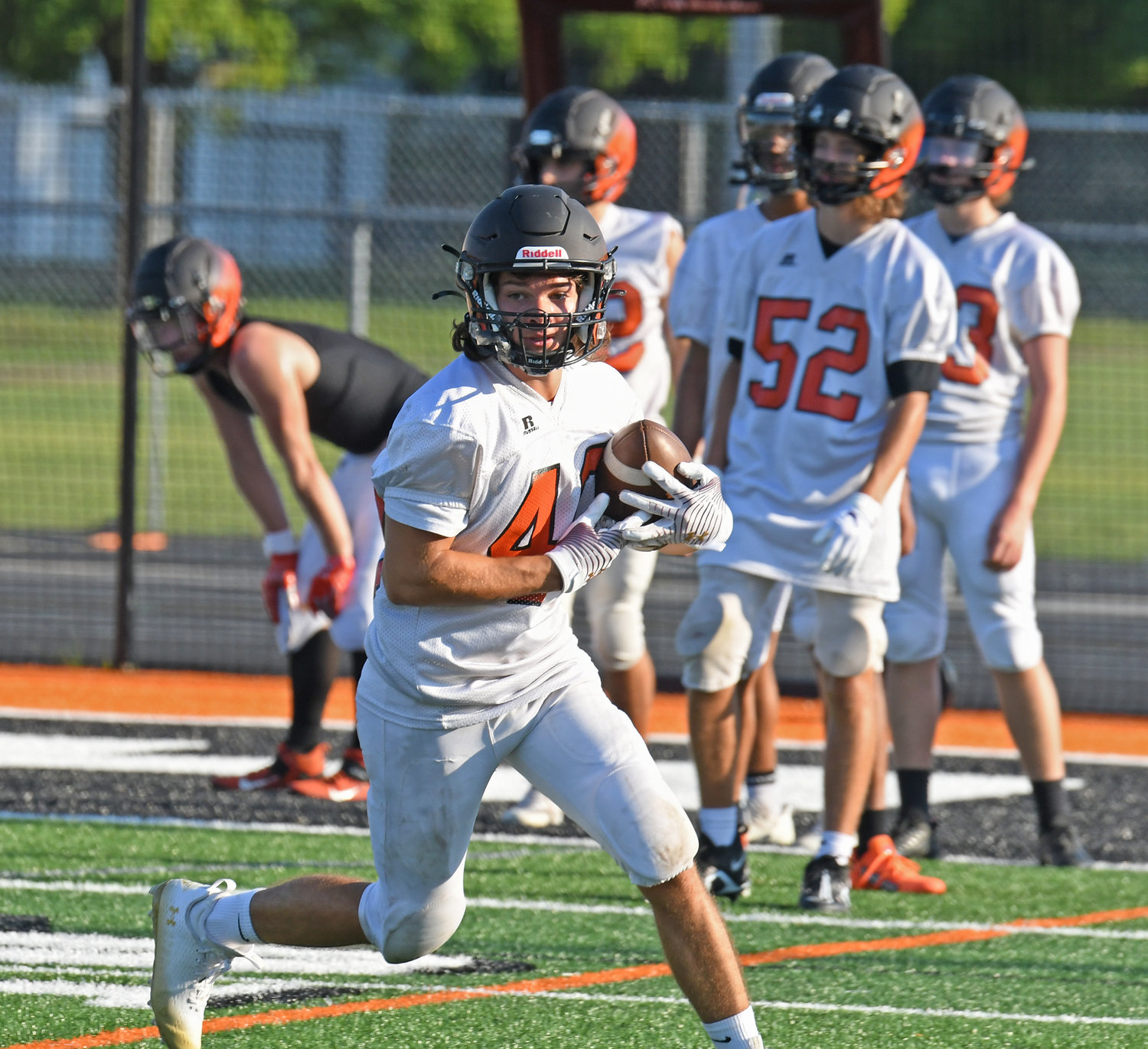 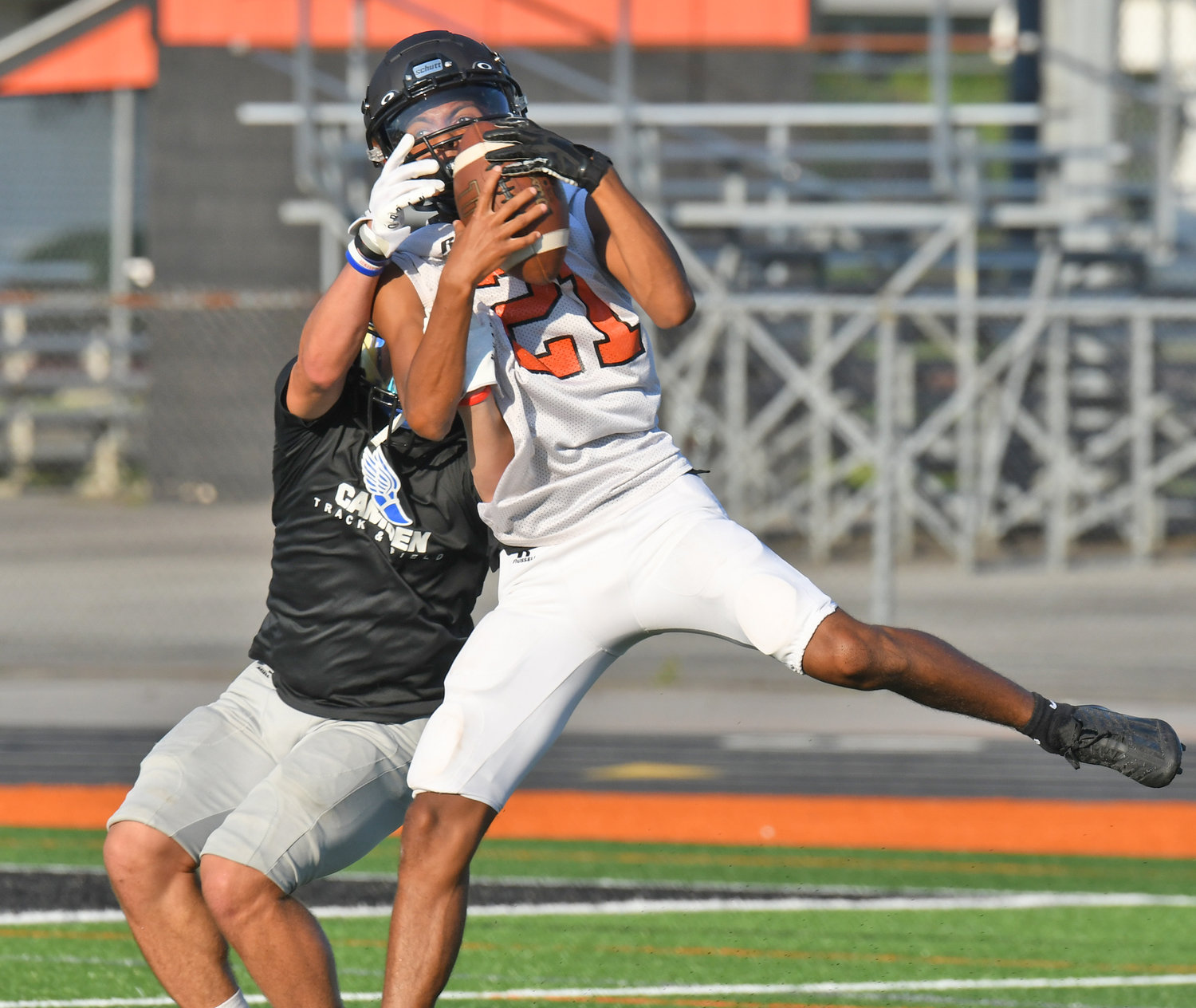 Matthew Lambert of Rome Free Academy makes a catch in front of Camden defender Robby Jackson during a seven-on-seven scrimmage on Aug. 29 at RFA Stadium.
(Sentinel photo by John Clifford) 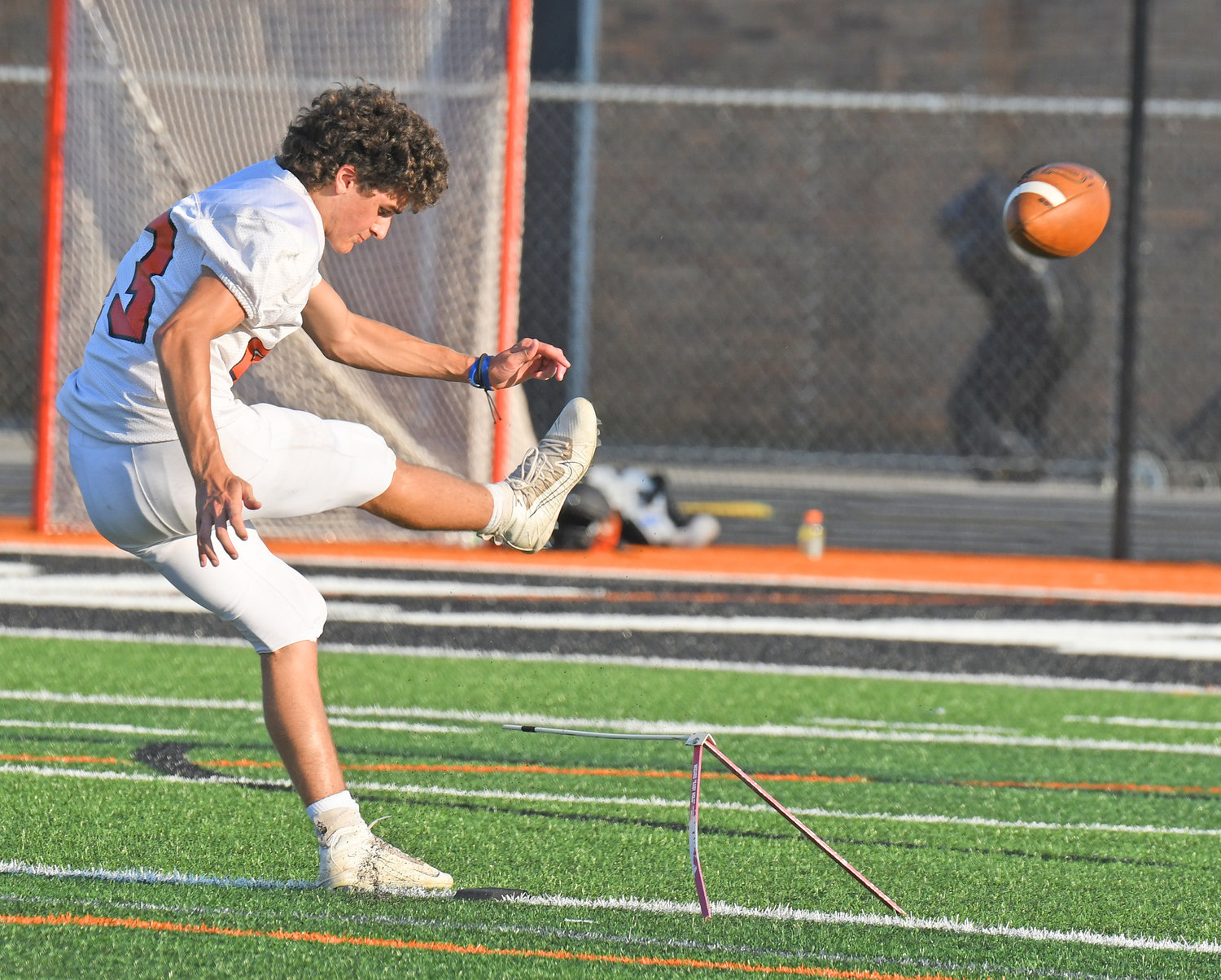 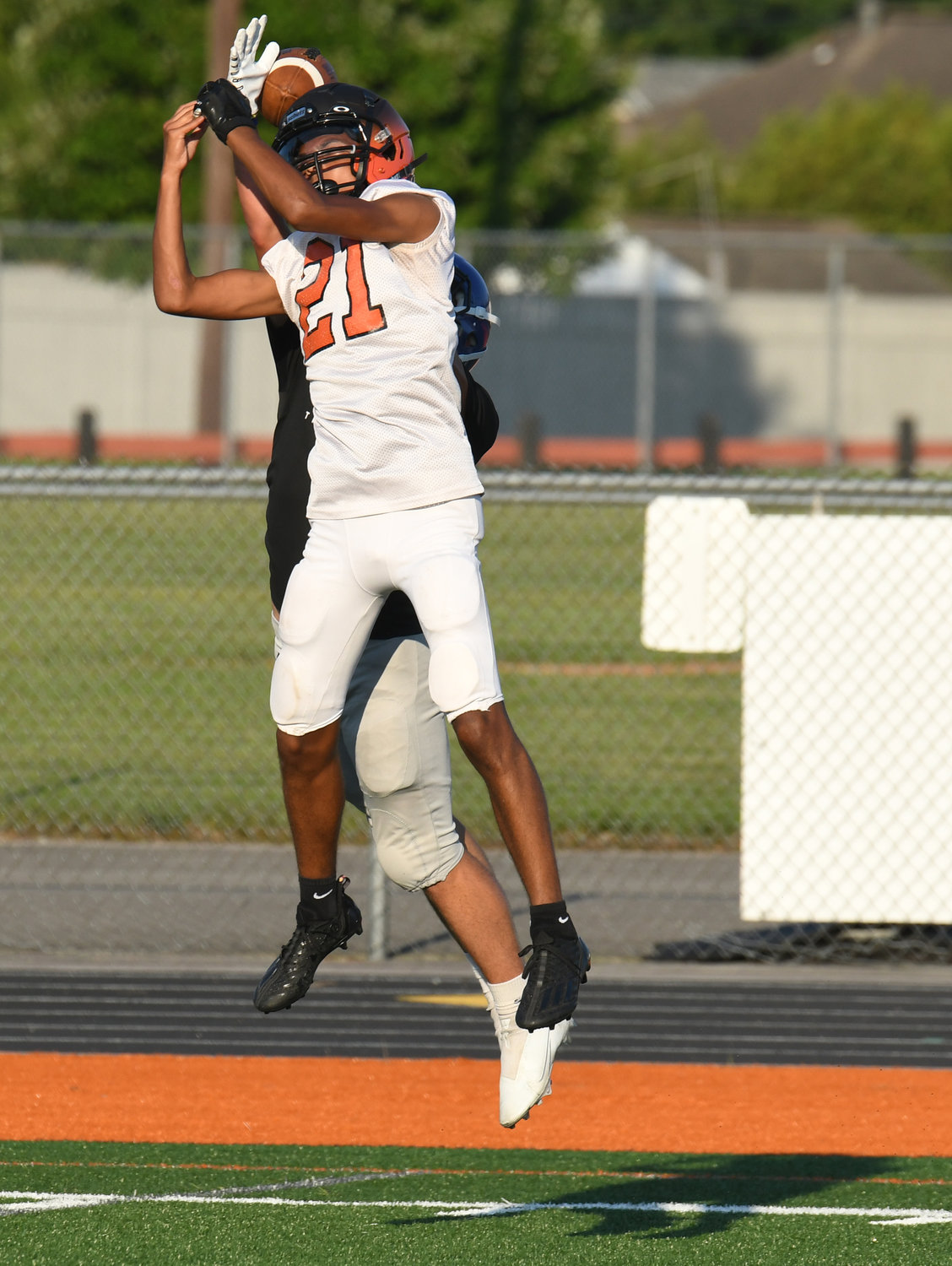 Rome Free Academy junior Matthew Lambert breaks up a pass during a seven-on-seven scrimmage with Camden on Aug. 29.
(Sentinel photo by John Clifford) 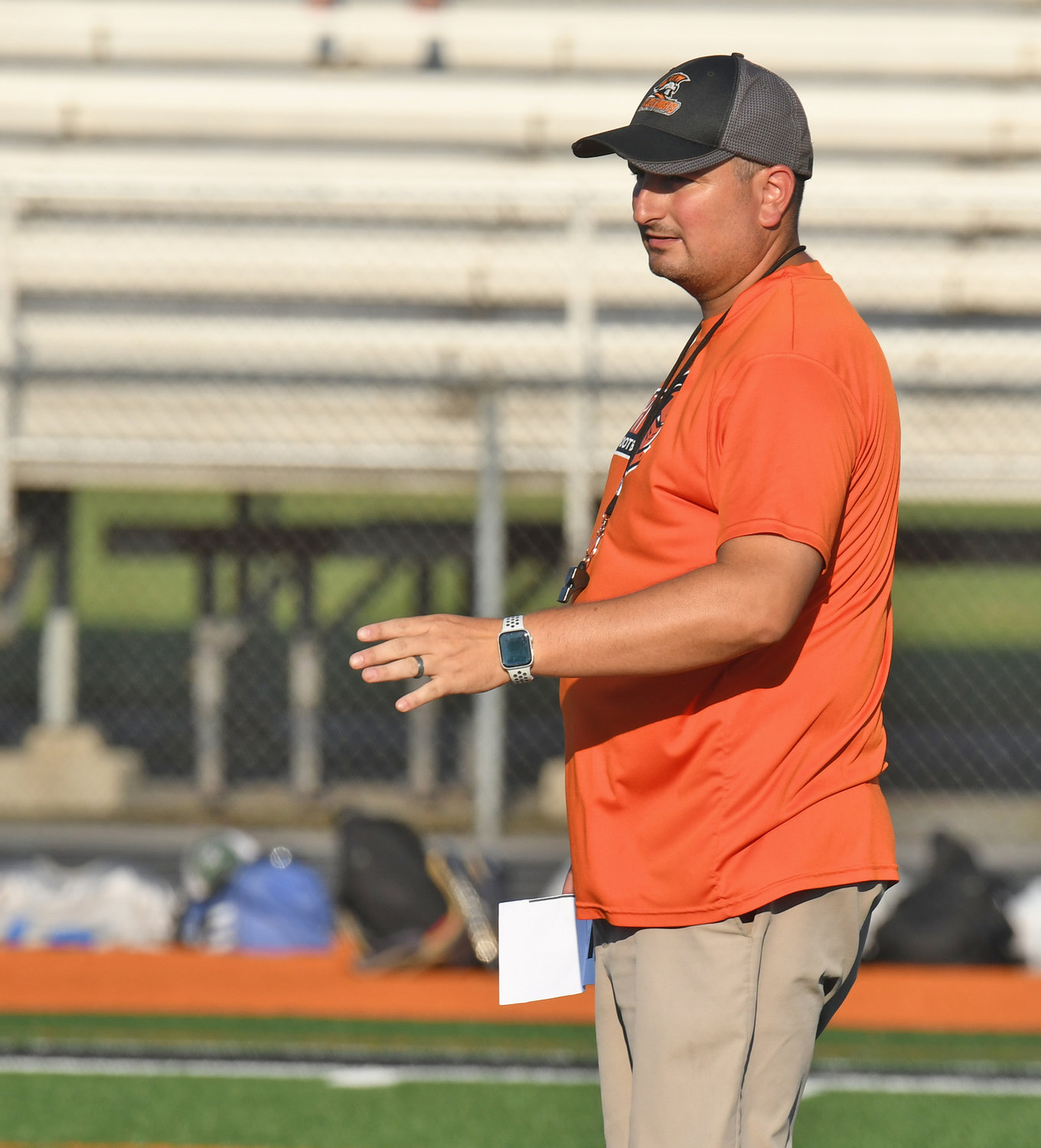 ROME — Coming off a season with a playoff appearance, the Rome Free Academy football team is looking to build off that and continue to improve its showing in Class AA this fall.

The Black Knights were 2-6 with a loss to Baldwinsville in the Class AA quarterfinals.

This year the team opened with a 52-26 loss to Class A team New Hartford on Sept. 2 at RFA Stadium.

“We definitely want to build off of what we did last year,” said fifth-year head coach Jake DerCola. “Competing” will be the goal, though he noted that Class AA “is a tough league and we have a tough schedule in front of us.” He said New Hartford as a non-league opponent will be “good competition for us for the opening week.” He said the Spartans are “on the right track. Coach Jim Kramer has helped rebuild that program.”

The Black Knights have a number of contributors from last fall who have graduated, and others will need to step up to fill those roles. That includes co-captain Ryan O’Connell, who was a presence not just on the offensive and defensive lines but was a leader, “a guy who worked hard every day,” DerCola said. Gone also are receiver-linebacker Kaiden McCaskill, running back-defensive back Nevaeh Baez, running back-linebacker Dayton Kelly, receiver-defensive back Max hunt and linemen Dominick Vescio and Cameron Dougherty.

“We have some skill guys who can step right in and fill those shoes,” said DerCola.

Back at the center of the offense is junior quarterback Evan Carlson-Stephenson. “The game is coming to him even more,” DerCola said of the second-year starter. Last season he was 78-for-142 passing for 913 yards, nine touchdowns and eight interceptions.

Backing him up are junior Coby Thompson and sophomore Austin DeJean.

Behind the quarterback will be a trio of running backs who will all get carries — juniors Ricky Fernandez and Salvatore Martelli and sophomore Lebron Bowman. Martelli is the power runner in the group while the other two are speed backs. All three are returning varsity players, but virtually all the carries last season went to senior backs. New to varsity is freshman Surafia Norries, who could also get carries, the coach noted.

McCaskill, Hunt and Baez were three of the four top pass catchers last season. The lone returning receiver with double digit catches, 100-plus yards or any TDs is senior Jack Lawless. The six-foot-three pass catcher had 11 catches for 161 yards and two TDs last year. “He’s bigger, faster and stronger,” DerCola said. Joining him as top targets for Carlson-Stephenson will be senior Lucas Allen and juniors Rinaldo DiCastro and Dakota Knapp.

The two veteran offensive linemen in the group are seniors Ryan Lucia and Brian East. Senior Noah Destito; juniors Tanner Hill, Josiah Holmes and Orlando Pimentel; and sophomore Anthony Perry will all battle for the other starting spots and playing time.

“I think we’re going to do a lot of things we did last year and maybe some more things,” said DerCola of his offense. “With Evan at QB he’s able to spread the ball and make every throw on the field.” The game plans should include more passing and more routes. But for all that to come together, he noted, the team will have to do a better job of protecting the signal caller. “We definitely have to work on that, giving him time to throw. If we can give him time, we’ll be successful.”

Of Carlson-Stephenson, the coach said, “The nice part is he’s another year in. He’s more familiar with our schemes, knows the hot routes and doesn’t have to hold onto it for a while. That will help us too.”

On the defensive side of the ball, the Knights have to contain opposing offenses better. The team was last in the eight-team league last season with 361 points allowed. While 0-8 Nottingham allowed 333 points, no other team in the league allowed more than 192.

“We’re more of a quickness type of a defense. Give you multiple looks and come at you from all directions,” DerCola said.

Like on offense, Lucia and East will anchor the line. Hill, Perry and Lowder will also compete for game time. Also on the line are Natale, Patnode, Enos, Ferrucci, Van Wie, Andrewski, Bronson, Cieslak, Pimentel and Ciccone.

Martelli returns as an inside linebacker. Destito and Holmes will also be in that position. Lawless has shifted from cornerback to outside linebacker, taking a more physical role, the coach noted. Also on the outside will be Bowman, Fernandez and Bonanza.

Bowman could also wind up in the defensive backfield, as the coaching staff continues to figure out where to put players. DiCastro, Knapp, Allen and Norries are all contenders for starting spots. Karsen Patnode, Powers-Ginter and Sharrino are also in the backfield.

The four years under DerCola included the short spring season when Section III adjusted the 2020-21 season due to COVID-19. That, he said, “hindered some of our process,” but, he continued, “it’s nice to get back on track.” He said the participation numbers at junior varsity and varsity are going back up.

And despite a team that includes only 10 seniors, there is leadership, the coach said. Lawless, he said, “is doing his best up there being a leader.” Some other seniors are those who lead by example and are not as vocal, he said. There’s also experienced juniors like Carlson-Stephenson and Fernandez who are vocal leaders. “That helps all across the board.” The junior class is exhibiting the benefits of playing with each for a long time, he added.

Class AA will have seven teams this year, with Corcoran dropping down to Class A and Nottingham now an Independent. New to the league is Christian Brothers Academy, up from Class A.

“Week in and week out you’re going to have tough games. You can’t look ahead,” DerCola said. RFA’s first league opponent will be Baldwinsville at 6:30 p.m. on Sept. 9 at home. It was the Bees who ended the Knights’ season last fall in the playoffs. “We have to get ready for them and play them better than we did last year.”