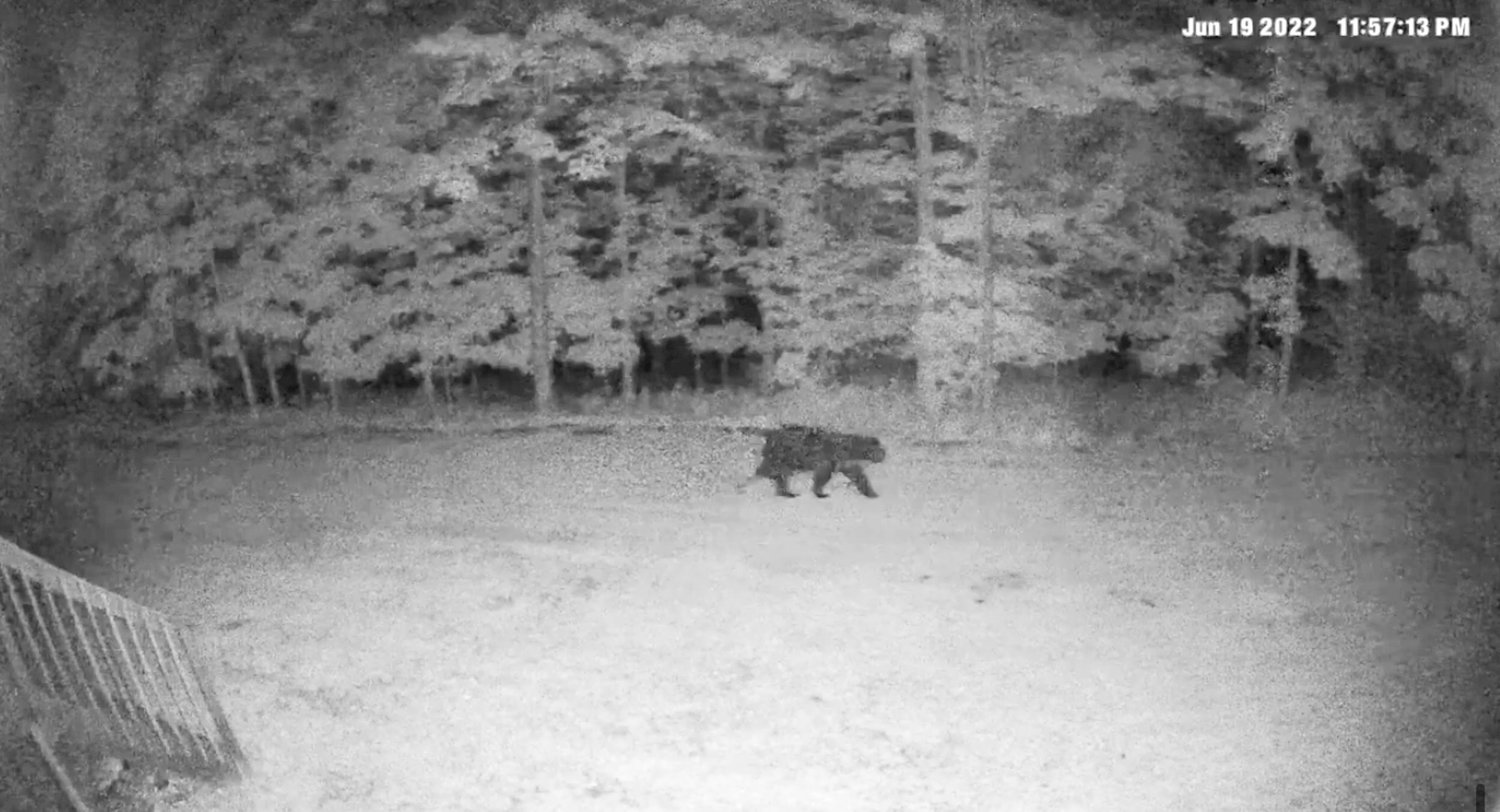 A black bear was spotted wandering through a back yard in rural Westmoreland shortly before midnight on Sunday. The DEC warns residents to keep their distance if they spot a bear on their property, and to be mindful of any potential food sources, like uncovered trash cans and bird feeders. Black bears are often spotted in the spring, the start of mating season.
(Photo courtesy Jeff Szarek)
Posted Tuesday, June 21, 2022 7:00 am
Sean I. Mills
Staff writer
email / twitter

A black bear or two has been spotted in Westmoreland and Deerfield and the New York State Department of Environmental Conservation has some advice for how to stay safe if you see a bear on your property.

Westmoreland resident Jeff Szarek caught footage of a black bear crossing his yard on Shannon Circle shortly before midnight on Sunday. Szarek said the bear was then spotted on nearby Fairway Drive Monday morning.

Shannon Circle is a rural dead-end near Dean’s Creek in Westmoreland. A black bear was also photographed on Bell Hill Road in Deerfield last week, according to reports.

There are usually several reported black bear sightings in the Oneida County area every spring, which the DEC said is prime breeding time for black bears.

DEC officials said bears are either looking for mates or younger animals are spreading out to look for their own territory. The bear mating season starts in June and stretches into August. New York only has black bears, and usually they’re younger aged males this time of year, officials said.

If you spot a bear in your yard or in the wild, DEC officials warn to keep your distance and be respectful. Officials also want you to be aware of any possible food sources on your property, like uncovered trash cans or bird feeders.

According to the DEC, there are at least 6,000 to 8,000 black bears in areas of New York open to hunting. About 10 to 15% of those bears live in the central and western areas of the state. Officials said transient bears are routinely encountered in the Mohawk Valley, as well as areas like the Lake Ontario Plains and the St. Lawrence Valley.

Black bears typically hibernate up to five months during the winter, officials said. They are omnivores and are known to eat nearly anything, from grasses to berries, fruits, nuts, seeds and carrion. They are also known to eat human sources of food, such as corn, honey, bird seed, trash and pet food.

Officials said black bears are naturally curious, which is why they are so willing to get close to human settlements while on the search for food. Bears are also intelligent and learn from experience, which means bears will remember if a human feeds them and will likely come back for more.

When a bear learns to obtain food directly from humans, officials said the bear can become bold and aggressive. Deliberate and intentional feeding of bears is illegal in New York.

Feeding bears is also unhealthy for the bears, officials said. When bears dig into garbage, they won’t distinguish between food and other trash, like soap, shaving cream, plastic and food packaging materials.