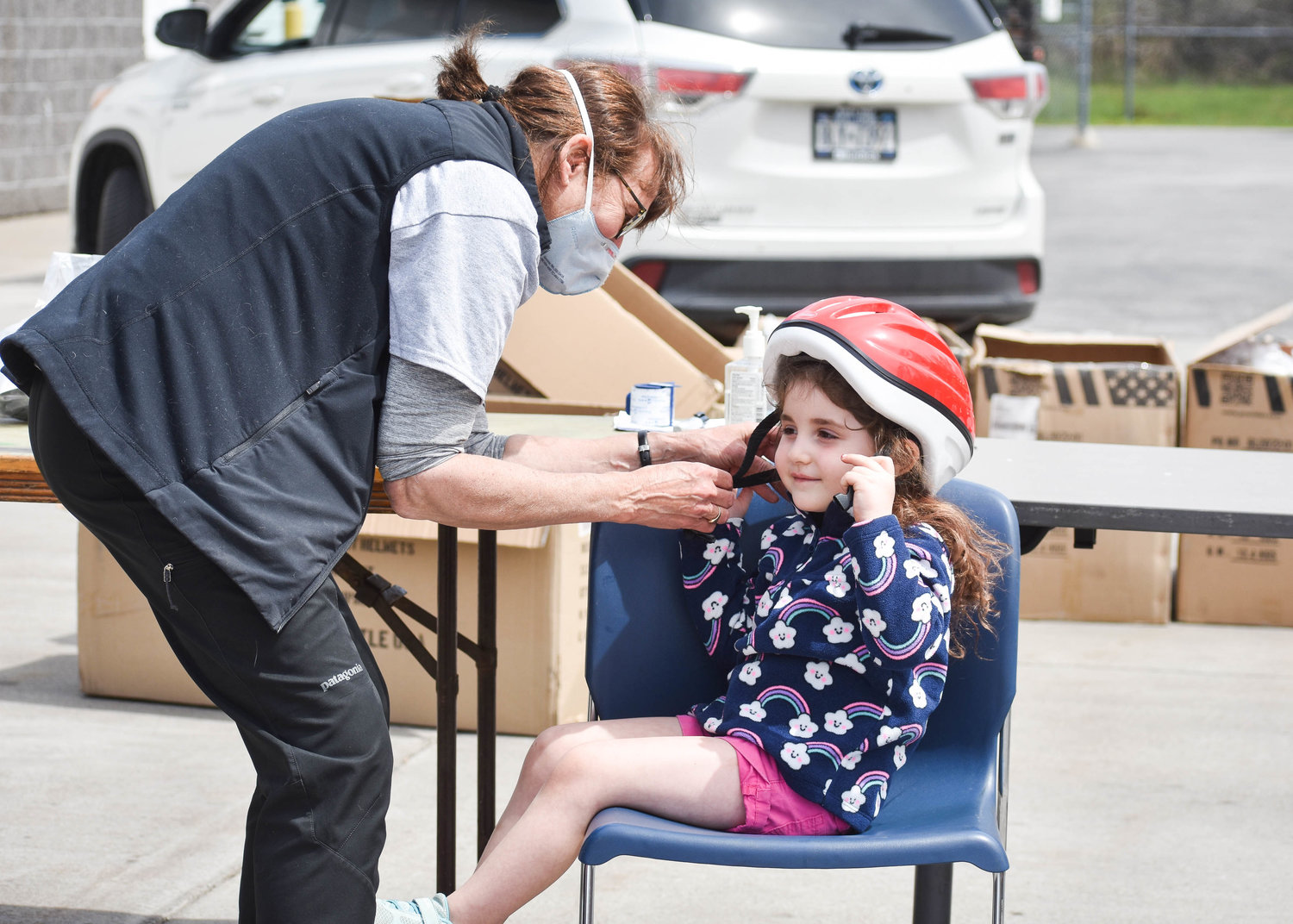 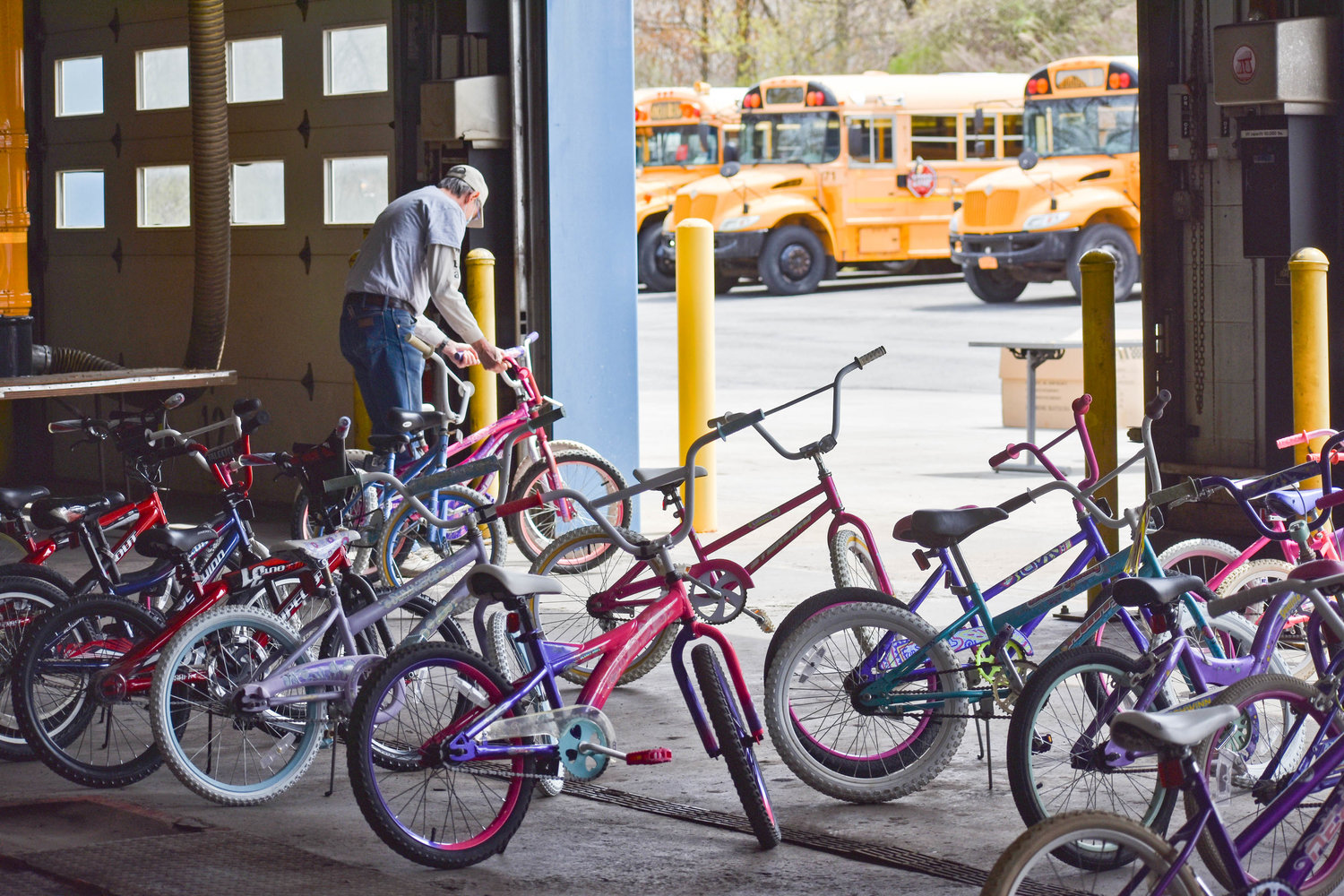 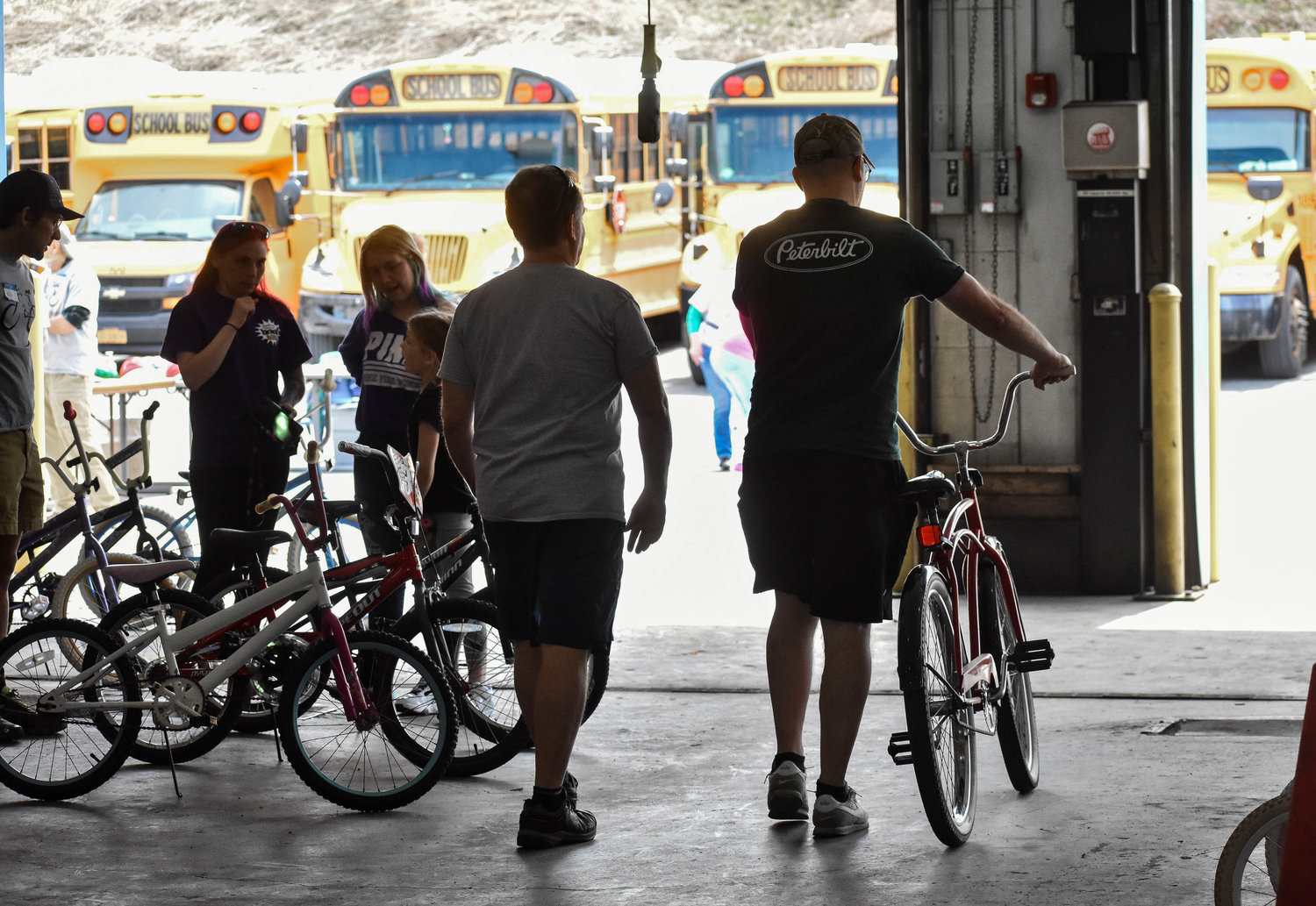 People young and old can benefit from owning a bike — to the left, a child picks from the selection at Community Bikes' distribution event. In the center, an adult takes his selected bike out for a test drive.
(Sentinel Photo by Carly Stone)
Previous Next
Posted Wednesday, May 4, 2022 9:10 am
Carly Stone
Staff writer
email

ONEIDA — Children, adults, and whole families came out to the Madison-Oneida Costello Transportation Center on Sunday to get suited up with their own bike, helmet, and bike lock, all for free.

The mission of Community Bikes, the non-for-profit who hosted the giveaway, is simple: get bikes in the hands of people who need them but who would otherwise have difficultly in doing so.

The organization primarily provides bikes to those who receive some form of public assistance, whether it be SNAP, Medicaid, Medicare, or something else completely. But that’s not all. “If you’re not on public assistance, but there are other special circumstances, let us know about that,” said Community Bikes Founder Chuck Fox. He and his team will try to help.

This was the biggest giveaway thus far, Fox reported. His organization has hosted giveaways for over a decade. 370 people pre-registered for this event, and another 40 were placed on a wait list, he said. All together, he predicted over 300 bikes were taken home by the end of the day.

The bikes were donated by community members, and all were inspected, fixed, and cleaned up by volunteers before making it to the selection floor.

People were so eager to get a bike, Fox said there was a line waiting as early as 8:15 a.m. — the event wasn’t due to start until 11. One Mom came early to ensure her son with a learning disability would be able to find the right bike, Fox shared. Not finding one would have been a difficult disappointment, she told him.

“You mean I can take it home?” and, “I can pick from any of these?” are comments volunteers said they often hear as they take visitors to browse the selection.

Volunteers help with check-in, guiding prospective owners to the right bike for them, fitting bike users to helmets, and overseeing test-drives.

Plenty of families came together to all leave with their own set of wheels, the volunteers reported. One group included two kids, a mother, and a grandmother. The age range for the day was as young as three and as old as 60+, the volunteers claimed. They said they got to see some adults react to hopping on a bike for the first time in a long time, which they say was special to see.

For kids, picking a bike can be simple. But for adults, it may be more demanding.

“They can’t afford a car, can’t afford the gas, can’t afford the insurance, can’t get a license, but they have to be places on a regular basis” are a few of the many reasons someone might sign up for a bike, Fox explained. Often people need them to commute to work, he said. That very day, one woman said she was riding her bike all the way to Wampsville from the event site, the volunteers shared.

Whether just for fun or for practicality, Fox said what matters is “in the end, [everyone has] a bike that works for them, that they like, and that they can ride.” Recipients’ bikes and helmets are fully adjusted for them before they leave.

Community Bikes coordinates with social services like Community Action Partnership and Liberty Resources along with area schools and churches to get the word out and get as many people signed up as possible. They want donors to hear the word, too. “Really nice bikes that have been sitting in somebody’s garage for five years get a new life,” Fox commented. He wants all those unused bikes to find a new home through his organization.

To support Community Bikes and make a donation, email Chuck Fox at chuck.fox@communitybikes.org to alert him of your donation. Then, visit one of the following drop-off locations:

Donated bicycles should be in good condition (all parts working, minimal rust) so that volunteers can get them in like-new condition with minor repairs (e.g. new tires, seats, or grips; brake or gear adjustments, etc.) and a thorough cleaning.

Monetary donations can be made at communitybikes.org or mailed to Community Bikes, P.O. Box 513, Hamilton, NY 13346.

The next distribution event will take place on Sunday, May 15 from 11:00 a.m.- 1:00 p.m. at Hamilton Central School. Pre-registration is required via the Community Bikes website. Anyone who needs a bike outside of giveaway days can email Fox to see if arrangements can be made. 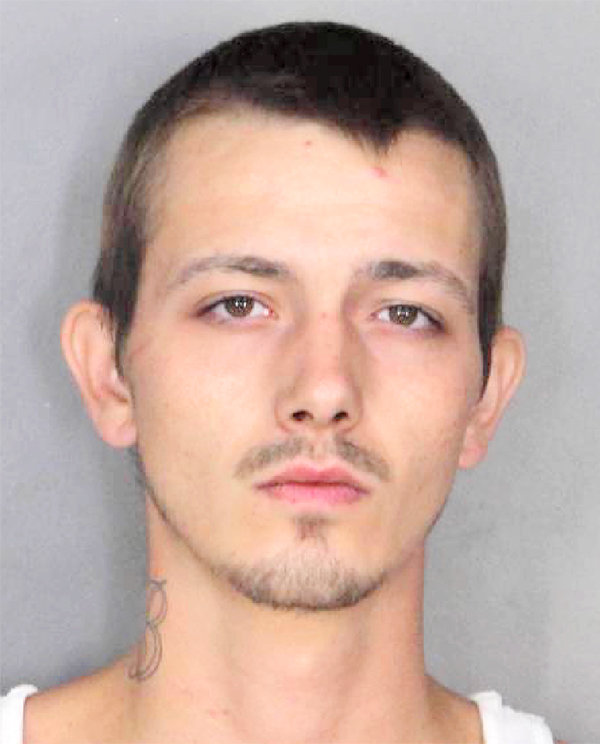