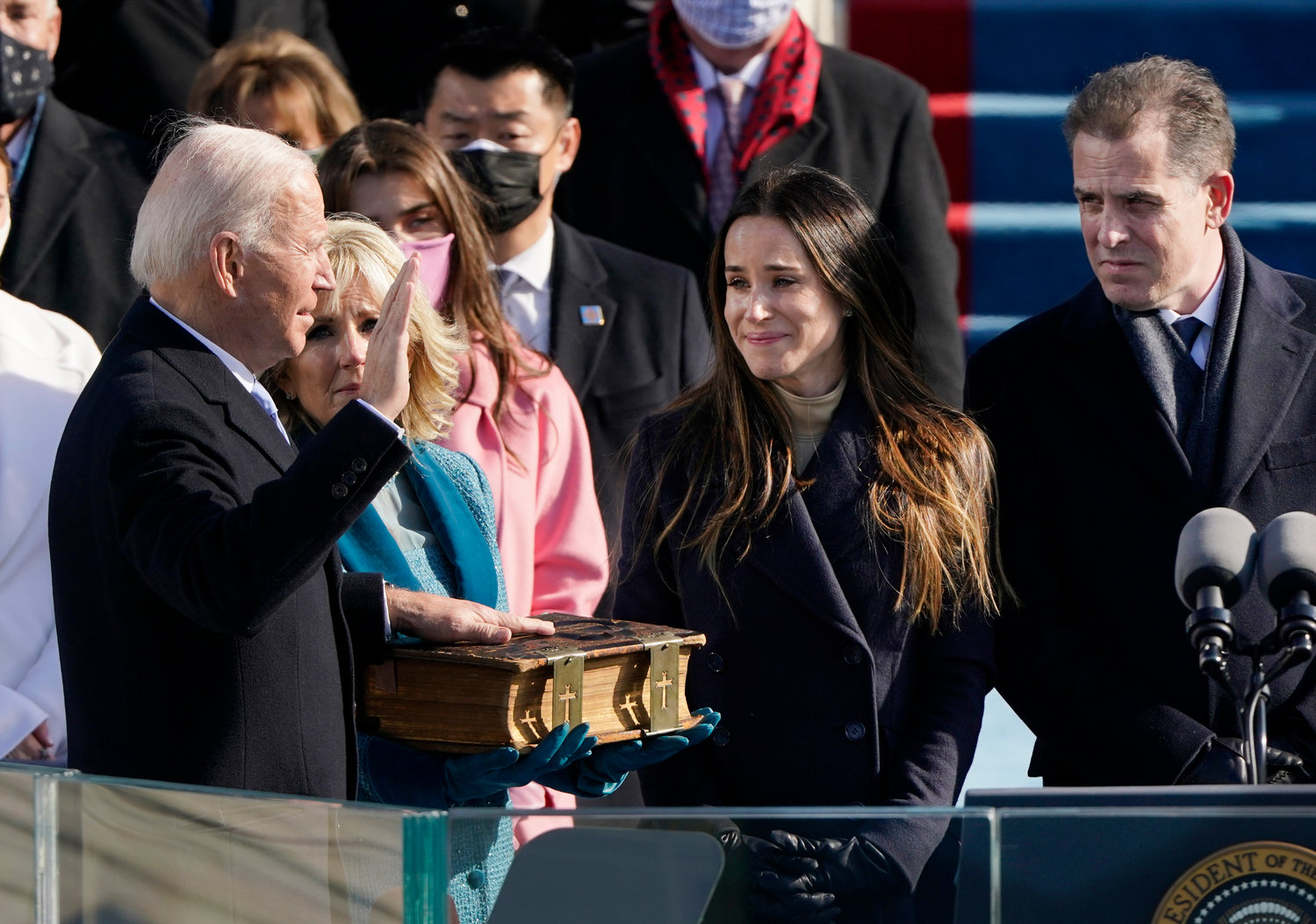 THE OATH — Joe Biden is sworn in as the 46th president of the United States by Chief Justice John Roberts as Jill Biden holds the Bible during the 59th Presidential Inauguration at the U.S. Capitol in Washington on Jan. 20. 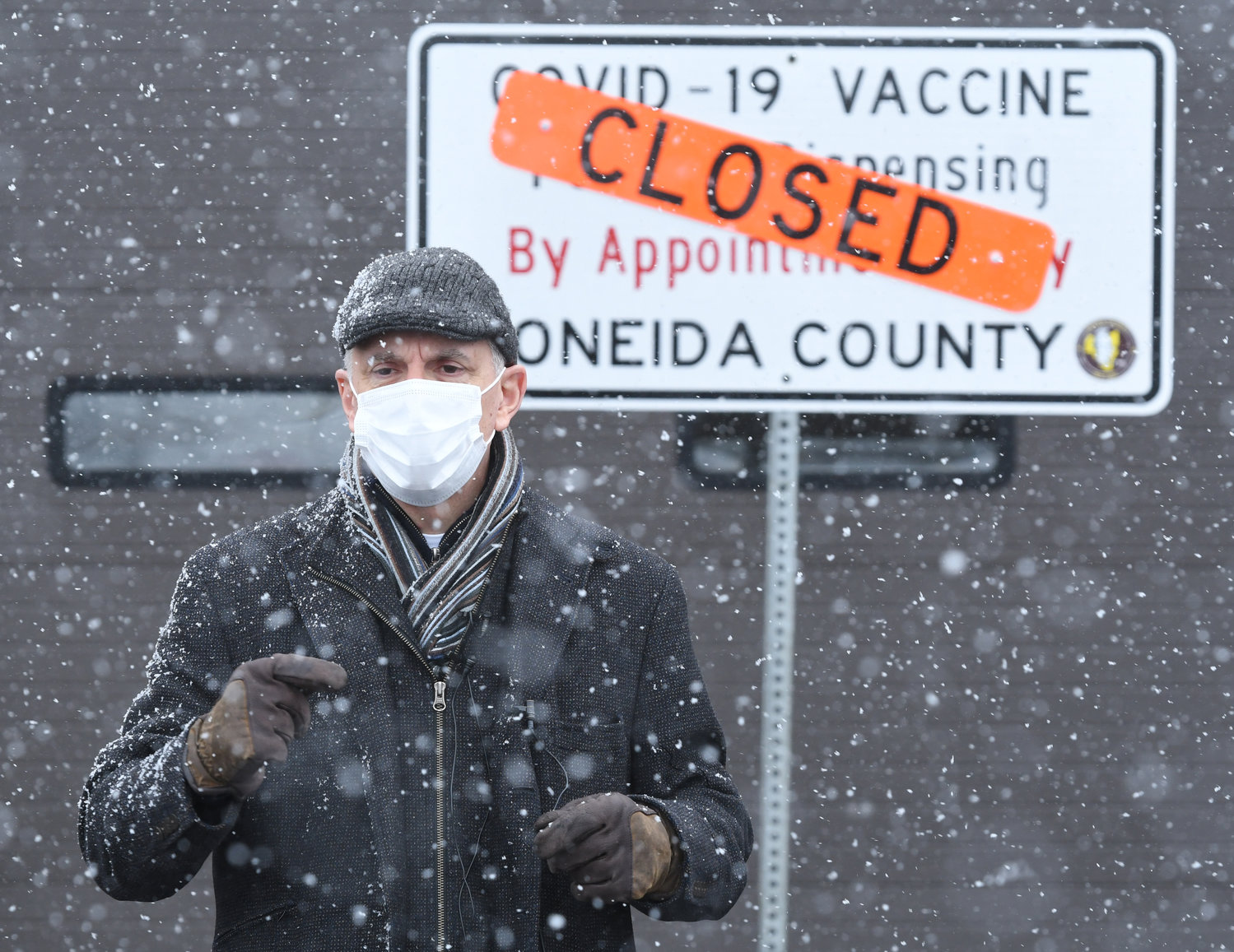 VACCINE SITE CLOSED — Oneida County Executive Anthony J. Picente Jr. talks about the lack of vaccines Jan. 22 at the 706 Building at Griffiss International Airport. Picente called a press conference at what had been the county’s second locally run distribution site, at Griffiss International Airport in Rome, to announce it and another site at Mohawk Valley Community College in Utica were closed for lack of vaccine doses.
(AP photo)
Previous Next
Posted Saturday, January 1, 2022 7:10 am

The Daily Sentinel takes a look at the top stories of 2021 that shaped our year.

2nd — Rome Memorial Hospital is continuing elective surgery and other procedures despite rising numbers of patients with COVID-19, but the Mohawk Valley Health System based in Utica and New Hartford is suspending non-essential procedures as of Monday.

3rd — Between April and August, Rome native Quiana Holmes was among 42 actors and musicians from around the world who helped composer, writer and producer Bálint Varga bring his original musical, d’ILLUSION: The Houdini Musical, to fruition with the creation of a new audiobook-inspired format that Varga terms the “audio theater experience.”

4th — The Mohawk Valley continues to have some of the highest indicators of COVID-19 in New York state but so far has avoided further restrictions on the economy.

5th — Greish Ortega-Lebron, 22, the driver in the Rome crash that killed 20-year-old Jasmine Finch in May has pleaded guilty to manslaughter and drunken driving, according to local court officials.

6th — WASHINGTON — Lawmakers were evacuated from the U.S. Capitol after protesters breached security and entered the building.

8th — Due to continuing impacts from COVID-19, including many staff members quarantined due to illness or exposure, the Rome school district is extending its all-remote learning format for students until Jan. 25.

9th — Anthony Brindisi, elected to New York’s 22nd Congressional District in 2018 and awaiting the outcome of his re-election bid more than two months after Election Day, is running for the office again. His campaign announced it filed a statement of candidacy with the Federal Election Commission for 2022.

10th — And with the economic ripple effect the 10-month COVID-19 pandemic has had on several area small businesses, Edward White, owner of Oriskany Diner on Route 69, has made the decision to retire, closing his mom-and-pop restaurant.

11th — Gov. Andrew Cuomo announced plans to form a public health corps led by newlytrained special personnel to give COVID-19 vaccines as he used terms comparingfighting the pandemic to war during his state of the state overview speech.

12th — Among those arrested at the Capitol was William Arthur Leary, who owns a manufactured housing business in Utica. In an interview Friday, Leary said that he strongly believes the election was stolen from Trump and that he went to Washington to show his support.

13th — New York Gov. Andrew M. Cuomo is calling on broadband internet providers to offer service for $15 a month to low-income households and for establishing a fund to help families who can’t afford that.

14th — WASHINGTON (AP) — President Donald Trump was impeached by the U.S. House for a historic second time Wednesday, charged with “incitement of insurrection” over the deadly mob siege of the Capitol.

15th — The county opened a vaccination site in Rome, at the county-owned Griffiss International Airport operations building at 706 Hangar Road. It is the second county-run vaccine site after one opened last week at Mohawk Valley Community College’s Utica campus.

16th —Naythen A. Aubain, 30, of Utica, accused of killing his grandmother and their landlord in early 2019 has pleaded guilty to both homicides in County Court.

17th —More distribution sites for the COVID-19 vaccines are opening but demand appears to continue to outstrip supply locally, in the Mohawk Valley and across New York, prompting warnings of fraud, calls for continued patience, and strong frustration from local officials on how the system is being run by the state.

18th — ANDRO Computational Solutions has been awarded a $1.1 million research contract by the Navy to develop a new unmanned aerial system technology that can automatically adapt to dynamic mission objectives and rapidly changing environments.

19th — Oneida County is suspending its vaccinations against COVID-19 at its two county-run distribution sites in Rome and Utica later this week because it is getting fewer doses from New York state, which says it is in turn getting fewer from the federal government.

21st — WASHINGTON (AP) — Joe Biden was sworn in as the 46th president of the United States on Jan. 20. Declaring that “democracy has prevailed,” Biden took the oath at a U.S. Capitol that had been battered by an insurrectionist siege just two weeks earlier.

22nd — Oneida County reported nine COVID-19-related deaths on Thursday, the most in one day since the pandemic arrived in March.

23rd — The fight to get more COVID-19 vaccine doses escalated Friday, with Oneida County Executive Anthony J. Picente Jr. blaming New York Gov. Andrew Cuomo for shortchanging the county so that it had to close its own distribution sites, and Cuomo warning that New York continues to get fewer vaccines from the federal government.

25th — More than 30,000 pounds of cream cheese was salvaged in Lewis County on Jan. 22 when a tractor trailer slid off Route 26. According to the West Leyden Fire Department, the tractor trailer lost control in a snow squall.

26th — Devri Japngie, 51, was killed when she was struck by an oncoming motor vehicle on Seneca Turnpike Jan. 23. Police said the driver was not driving drunk or impaired.

28th — Berkshire Bank, of Pittsfield, Mass., has petitioned to close its branch office at 100 W. Dominick St., site of the former Rome Savings Bank, and consolidate its operations into the office located at 1629 Black River Blvd.

29th — State Attorney General Letitia James has released a report on her office’s ongoing investigations into nursing homes’ responses to the COVID-19 pandemic — saying the state may have undercounted nursing home deaths due to COVID by as much as 50%.

30th — After about 400 ballots were canvassed by Oneida County election workers this week, unofficial vote totals show Claudia Tenney with an apparent vote lead in the 22nd congressional district contest.

31st — The Rome Police Department’s snowmobile patrol hit the trails for the first time this season on Jan. 29, now that enough snow has fallen.